Beatrice Haines: The 2015 Winner of the Anthology Competition was born in 1986 and lives and works in London and the South West. This Royal College graduate works in many different media including drawing, photography, printmaking and sculpture. Her current work focuses on relationships between the scientific and emotional, the grotesque and beautiful, the micro and macro and life and death. Personal objects thought to be mundane or viewed with disgust are raised to the status of relics.

The death of my grandmother prompted a fascination in her cherished possessions left behind. Each object acquired a poignancy that had previously not existed. Although void of life, her house took on the role of a museum of personal antiquities. I held onto her memory by recording as many objects and traces as I could; scuffs on the carpet, tea stains, strands of hair left in her comb.

Since this experience, my artwork has been heavily influenced by traces. Although the human is largely absent in my work, the object left behind acts an anthropomorphic portrait that, like forensic evidence, tells its own story. Objects that hold a personal resonance are raised to the status of relics despite their interpretation as banal or grotesque by the outsider. This re-appropriation gives them new life and meaning.

Whilst taking on the importance of a relic, the subject is treated in a similar way to a scientific specimen and made to look sterile despite its emotional value. It is not only dehumanized in this way but makes us question our preconceived views of such things conditioned into us from infancy.

Subject matter often becomes art material. Past artworks have been fashioned out of lime scale, human gallstones, blood and forensic fingerprint powder. The use of mundane materials such as discarded mattresses, fridges or cable ties aims to unsettle the domestic or every day, prompting feelings of both familiarity and alienation.

Beatrice Haines  was the 2015 winner of the Anthology competition and is currently preparing for a solo exhibition at  Bermondsey Art Project Space in October. AL: How would you describe your practice?

BH: The majority of my practice is project based and multidisciplinary. I would describe myself as a contemporary and perhaps conceptual visual artist.

AL: Who do you list as your main influences?

BH: My family has always been a huge source of inspiration. There are quite a few artists in the family including my parents and sister. Visits to various art galleries were regular occurrences from an early age. I love Cornelia Parker’s work and remember being obsessed with Van Gogh when I was at school. Over the past few years, I have been influenced by forensics. I did a residency in a forensics lab a few years ago and feel this has helped teach me to look in a different way. Along with this comes inspiration from programmes such as ‘CSI: Vegas’ which despite its probable inaccuracies with a true forensic lab, has been a source of inspiration as well as ‘Twin Peaks’. In CSI, it is the scenes which others would probably find most boring that I find fascinating – where a piece of evidence is being processed in the lab and an array of techniques are being used to help the scientist read into the object. Essentially, this dissection is something I also do when studying my subject matter. 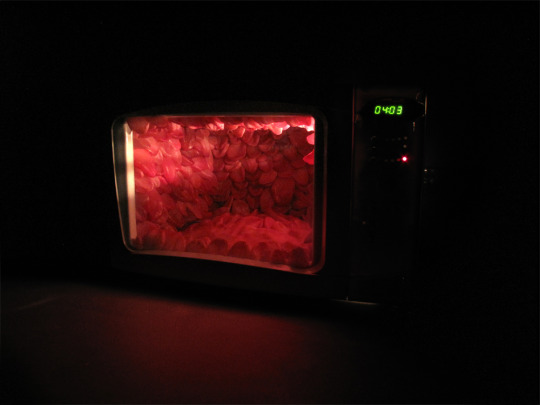 AL: How do you choose your subject matter?

BH: When talking about their pet cats, I have often heard people say “we didn’t choose her, she chose us”. I feel in some way this is the same as my subject matter. In order to realize a subject with potential, I have to keep an open mind and a keen eye. I have to be sensitive to the environment around me as it is often the small insignificant things that provide the richest opportunities. I may be walking down the street or racing through the landscape on a train and a glimpse of a window ledge or some detritus on the train track will trigger the epicenter of an idea which then ripples out and develops. These triggers, however, are always things that I see some poignancy in and that reveal something about the human condition. Despite the human often being absent in the art, I usually see my artwork as portraits of humanity as a species. Each work helps me to discover a little bit more about what it means to be human; our loves, our insecurities, our fragility, our strength and our mortality.

AL: As you work in a variety of media, does the subject govern material?

BH: Yes, sometimes the subject matter becomes the material. In the past, I have created artwork using materials ranging from lime scale found in an old immersion heater to forensic fingerprint powder to my grandmother’s gall stones. During October, I will be doing a residency at Griffin Gallery and in a lab where art materials are developed. I will be attempting to make pigment using human ashes. I feel that in using these materials – the physicality of examining them and touching them with my hands allows me to understand and connect with the subject matter more deeply. AL: How has your year been since winning Anthology?

BH: This year has been really exciting. I have a solo exhibition coming up at Bermondsey Art Project Space in October as well as work at the Science Gallery’s ‘Mouthy’ show and Ars Electronica’s international festival.

AL: Where do you see your work evolving from here?

BH: Because my artwork is often inspired by chance encounters, I never know exactly how the work will evolve, but I have noticed a change over the last few years from two to three-dimensional work. I have also become more interested in creating site-specific art which has been a natural result of the project-based nature of my work, residencies and a product of exhibiting outside the white wall gallery space in shows such as ‘the Last Breath’. I will be creating until I die, so who knows what my work will look like in 40, 50 or even 60 years’ time, but I look forward to finding out! I admire artists like Louise Bourgeois and Yayoi Kusama who were/are working into old age. The success of artists like the YBAs is rare, I am in it for the long game.