Recently the Guardian newspaper here in Britain offered yet another of those ‘best of’ lists to which both the print press and websites of various kinds are now addicted. In this case, what it listed was ‘the best art of the 21st century’. It contained a lot of currently familiar names. Among them were Ai Weiwei (no. 17), Tania Bruguera (no.20), Wolfgang Tillmans (no 21), Sarah Lucas (no. 19), Olafur Eliasson (no.11) and Gerhard Richter (no. 10). All of these are familiar from various appearances at the Tates, though not necessarily for the specific works chosen here. Only one of the artists just cited is actually British, though there are a few other Brits in the mix. The top spot goes to the Icelandic artist Ragnar Kjartanssson, with a work from 2012 called The Visitors.

What was really striking about the list, viewed as a whole, was the lack of art in traditional forms. Performance, video and installation – yes. But almost no paintings. Chris Ofili appears on the list for his The Upper Room (2002) “a cycle of 14 paintings, all based on an Andy Warhol sketch of a monkey, and assembled in a specially constructed and lit room in collaboration with architect David Adjaye.” Apart from these, there is one dinky little painting by Gerhard Richter. It’s worth quoting the description offered by The Guardian:
“Based on a photograph in Der Spiegel, Richter’s small painting depicts the moment the second passenger jet flew into the Twin Towers on 11 September 2001, consuming the building in a fireball. The painting is as small as the TV screens people were glued to that day. The image is interrupted, almost swiped away by paint, recognising the impossibility of comprehending the enormity of the moment.”

The question here is which in fact, is more powerful in conveying the event – the original photograph of the catastrophe, which preserves the exact moment of horror, or the painting so closely based upon it? Does the painting have anything to add?

The choice of artists and works has characteristics that, while nominally being up to the minute, already begin to seem dated. The list does contain a good proportion of female artists, though not in absolutely equal numbers to males. Ai Weiwei, a political exile, is the only Chinese. Pussy Riot are the only representatives of Russian art, familiar here in London from a show at the Saatchi Gallery. There is no artist from Japan. None from Iran – Tehran currently has one of the liveliest art worlds in the Middle East. Chris Ofili, though of Nigerian heritage, was born in Manchester. He studied in London at the Chelsea College of Art and the Royal College of Art, and was part of the British YBA movement, but has lived in Trinidad since 2005. Steve McQueen, also of African heritage, and not to be confused with the American film star who had the same name, was also born in Britain. He has resided in Amsterdam since 1996. Doris Salcedo comes from Colombia. Teresa Margolles comes from Mexico. Wael Shawky is Egyptian.

It nevertheless seems safe to say that the list of chosen artists reflects a Western view about what has been happening in the visual arts during for first two decades of the 21st century. The culture of the West is still dominant. However, certain aspects have shifted. German contemporary art, for example, is strongly present, just as it was in the earlier years of the Modern Movement, up until the rise of Nazism. French art, once at the very centre of Modernist innovation, now has just one representative: Pierre Huyghe. Christian Marclay is American-Swiss. There are no Italians and no artists from Spain.

The fact that Ai Weiwei and Pussy Riot are the only representatives in the list from two major national cultures reflects typically Western ‘know better’ attitudes. In the West, we are happy to celebrate artists whom their own lifestyles have cast aside, often for political reasons, because this support of ‘dissidents’ certifies our own moral superiority in comparison with what prevails in the regions that produced these exiles. There is certainly an argument for celebrating the work of Ai Weiwei, who has during his career, created a large corpus of powerful images. The reasons for celebrating Pussy Riot, in preference to the achievements of all other Russian artists at work during the first two decades of the 21st century, are less evident. Russian art has a tradition of expatriation, dating from considerably before the triumph of the Communist Party in Russia. Since the fall of Communism, it has diversified remarkably, both within Russia and outside it. Russian art has also become regionalised. Moscow and St Petersburg are no longer the only centres within Russia for productive, and often experimental, art-making. Pussy Riot has played only a very small role in this upheaval.

The list of events offered in the Guardian reflects the increasing centrality of institutions in the world of contemporary art, as opposed to other kinds of patronage. Essentially the thing now regularly offered to segments of a chosen institutional public is what is labelled ‘an experience’. Almost invariably, this experience is only available in some kind of collective space – a temple to the new kind of art, whose presence in the lives of the audience is regarded as a public benefit. In this respect, it has a certain resemblance to the kind of religious experience formerly made available to the public in buildings constructed for that purpose – not museums and art galleries but cathedrals, mosques and the like. There is more than a hint that the public these new events attract to contemporary official spaces also goes there not simply, nor even primarily, for aesthetic reasons, but to be morally improved and instructed. That is, the aims pursued by official spaces that present contemporary art are in some ways surprisingly traditional, even if the actual forms adopted for their presentations take full advantage of modern technologies of communication. 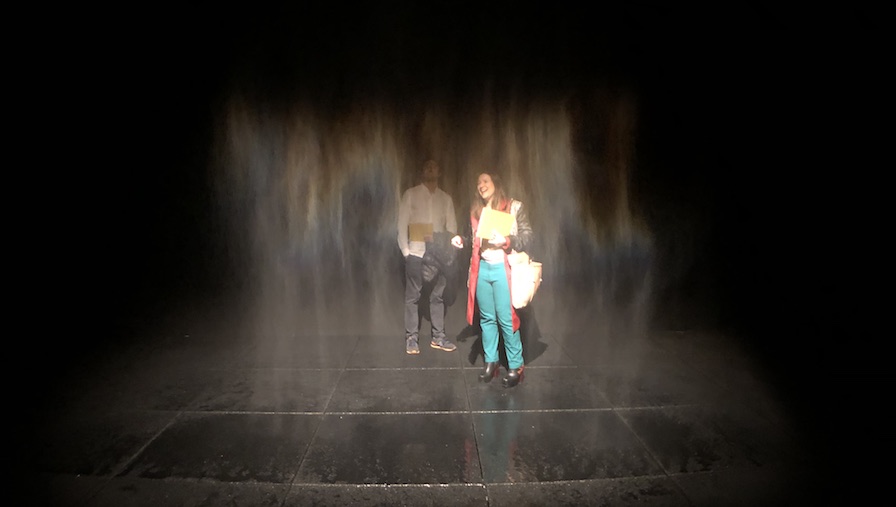 What is disappearing in the creation of artistic images for their own sake. In particular, there is decreasing interest in images, abstract or figurative, that exist outside of an established institutional framework. In part, this seems to be due to the distrust major exhibiting institutions feel for the market in supposedly avant-garde art. Art of this kind, till fairly recently, depended on the cult of the bad boy: Picasso, Modigliani – even (if you insist) Jean-Michel Basquiat. This, however, has now been countered by an equivalent cult of unjustly neglected female artists, who must now be offered their proper place in the Modernist and Post- Modernist pantheon. It has also been affected by the fact that certain kinds of non-governmental patronage don’t come to the institutions to which they offer support with immaculate hands. Better, therefore, for the exhibition spaces concerned to divorce themselves from any taint of the commercial by stressing that what they show has no intrinsic financial reference. Value is not being added in terms of the art market. What these institutions are doing instead is offering a kind of value that cannot be monetised. Offering it to the lives of as broad a spectrum of visitors as they can attract. These visitors must be made to feel that they are participants as well as just spectators because, in that way, the moral lessons intended are more likely to go in.

The weakness here is that the artistic events official spaces offer increasingly tend, by their very nature, to be ephemeral. They are tied to today’s news. Miss a show that is heavily dependent on installation and performance and your chance for recreating the experience it offers, or of getting it later on in some other form, is gone. Rather than preserving the past, gallery events of the kind cited here emphasise not the quasi-permanence but the evanescence of artistic experience. While you may, perhaps get a second or third opportunity to see the Sistine Chapel – that if if you miss it on an initial visit to Rome – but your chance of experiencing what Pussy Riot had to offer you is almost certainly already gone. Pussy Riot reflected a very particular, ephemeral moment in post-Soviet Russian culture. It’s hard to get back into that frame of mind. And where is their work currently on show?

It’s not just that the big -isms of early Modernist art have faded away: Cubism, Expressionism, Futurism, Surrealism and the rest. It is also that the art that institutions are excited to offer us now commands us to live in the moment. And to forget that moment the instant we walk out of their doors.