“Such a preachy, pompous show.” – Telegraph. “Viola’s art is dated, dead in the water.“ Guardian. “One of the most famous video artists of our time” Fondation Cartier. What does Artlyst think?
There are exhibitions where writing less is better. Not because there is nothing to say, it is quite the opposite, evaluating either Bill Viola or Michelangelo would be somewhat pretentious unless you want to cover five centuries of art history.

The medium is just a tool in this investigation – Bill Viola

Throughout the exhibition two drastically different worlds are colliding; the exhibition is controversial, profoundly moving, yet disturbing. Being biased does not help and the British press wasn’t too kind about “Life, Death, Rebirth” either.

The Royal Academy was trying to convince the audience that they are not comparing the two artists and do not seek to turn Viola into a “modern Michelangelo” and that it is only the subject matter that brought them together. I wonder how much of this the general public will understand and I can’t help sensing a commercial agenda. Ticket sales are definitely guaranteed here. 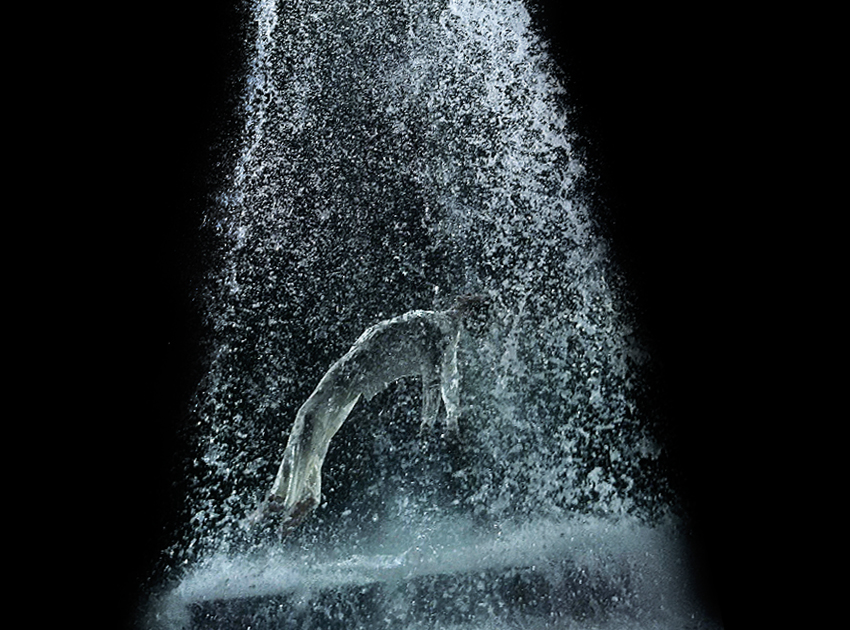 The New York-born artist, known for his stately video installations, mostly featuring angel-like drowning figures in slow motion, makes no secret of his admiration for his Renaissance ancestors. He haunted cathedrals in Florence, he even had his “first unconscious experiences of art” related to the body in architectural spaces and often considered churches as “a form of installation, a physical, spatial, consuming experience”.

Viola also visited Windsor Castle in 2006, to study the Queen’s Renaissance drawings and was mesmerised by the expressive use of bodies to convey emotional and spiritual states. At that point, Martin Clayton, the Head of the Royal Collection’s Prints and Drawings sensed a rapport between the two artists. He wanted to juxtapose Viola’s work with Michelangelo’s highly finished drawings – yet Caravaggio would have surely been far more apposite – including the “Crucifixion”, as well the “Virgin and Child with the Infant St John” known as the “Taddei Tondo”, the artist’s only marble sculpture in the UK. 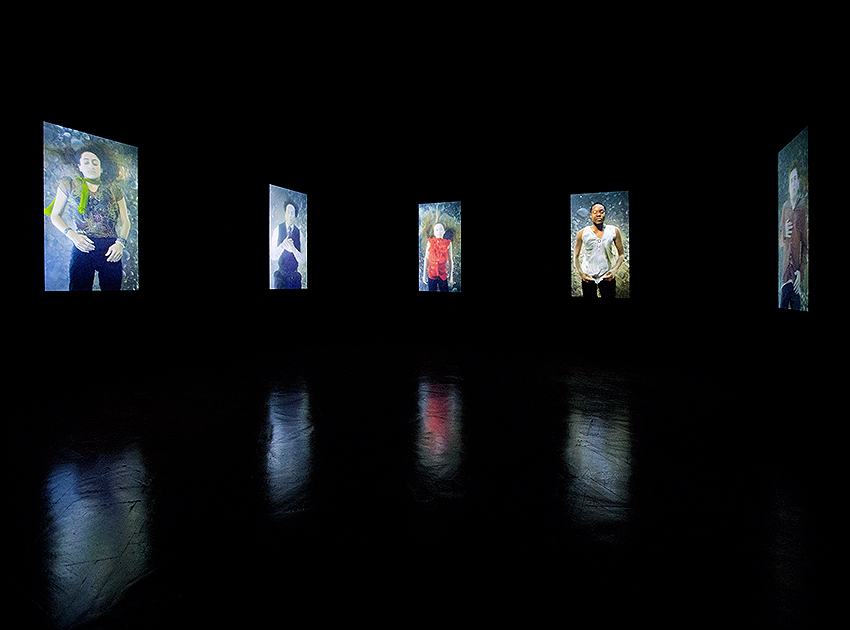 Although Viola’s work represents a radically different medium, he has also struggled with fundamental questions of birth, life and death.
Michelangelo’s glorious gathering of drawings and sculptures are exquisite, they take us to the emotional core of his work, incarnating beauty, vulnerability, grief and ecstasy. Viola in his videos performs similar ventures, subjecting his models to dissolution in natural settings of fire, water and air.
For both artists, the human body is inspirational, both master symbolic powers and show the physical extremes of transcendence conceiving an immersive journey through life.

The Royal Academy dedicated their principle Main Galleries to the exhibition, featuring 12 video installations spanning Viola’s entire career from 1977 to 2013, including the extraordinary “Tristan’s Ascension”, a five-meter-high projection depicting the ascent of the soul after death alongside 14 of Michelangelo’s drawings, lent by the Queen. 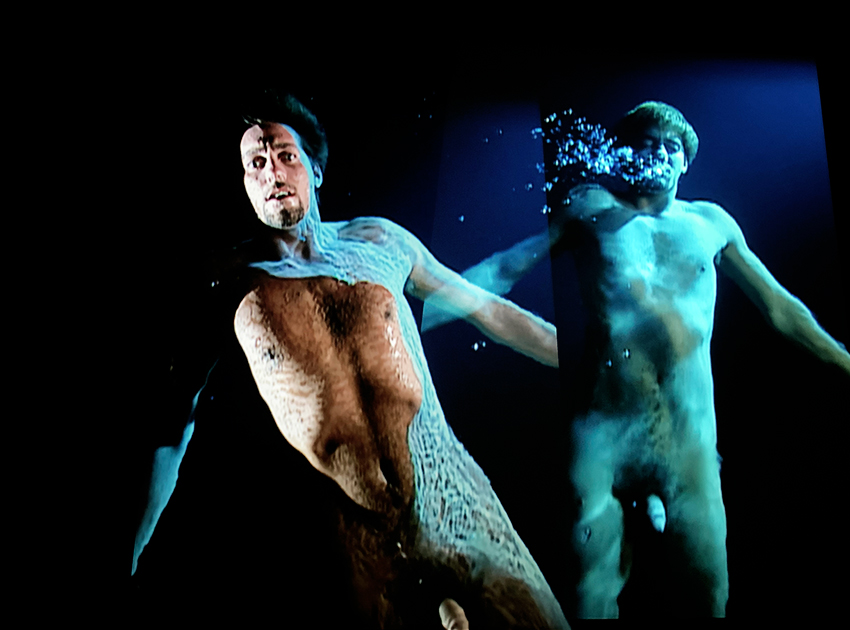 “The Messenger” by Bill Viola / Photo © Courtesy of ZOLTAN+

The exhibition opens with Viola’s video installation “The Messenger”, initially exhibited in Durham Cathedral in 1996, with a naked man floating aimlessly in ink-blue water in slow motion, breaking through the surface, gasping for breath, and descending back into the dark. These images frequently recur in Viola’s work, who once almost drowned while on holiday as a child. 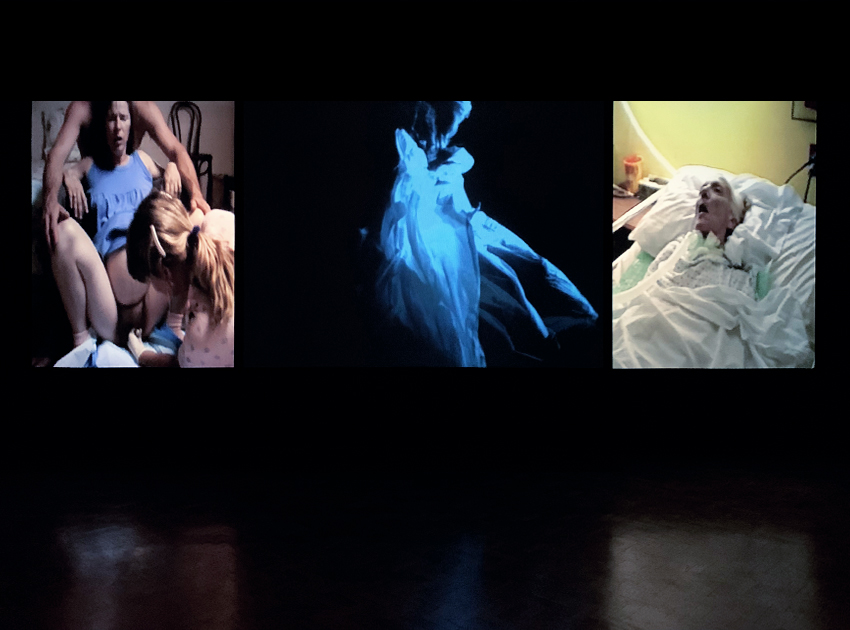 The “Nantes Triptych,” created in 1992, is devastating yet reiterates some clichés. It is installed opposite the “Virgin and Child with the Infant St John” known as the “Taddei Tondo” and a trio of drawings which act as a catalyst to our senses and has none of the raw, life-and-death drama of Viola’s triptych.

Three huge panels display raw images of life; on the left a young woman’s vulnerability and endurance of pain in giving birth, literally showing every detail of her vagina; on the right, a respirator, attached to the old woman, Viola’s mother, lying in a hospital bed, dying. The central panel shows a man underwater, suspended and bracketed between birth and death separating the scenes.

The soundscapes are haunting with random breathing, moaning, cries and rhythmic gurgle, giving birth and dying. Reality hits the room hard. Our privacy is somewhere violated and the images cannot be watched longer than for a glimpse. Viola is documenting what was occurring, the two true events are exceptionally not staged, unlike the rest of the exhibition which is nothing but a theatre.

“The real investigation is that of life and of being itself; the medium is just a tool in this investigation” Bill Viola. 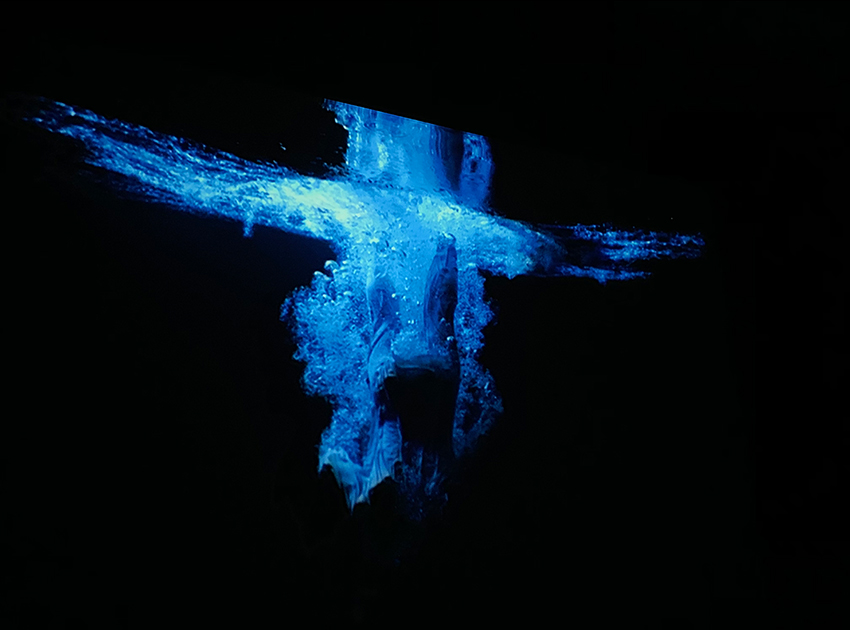 The principal Main Gallery was spectacular. The “Five Angels for the Millennium”, five enormous screens projected the usual elements, burning, fire and drowning in water. I was taken by the scale of the installation, but not so much by the angels. 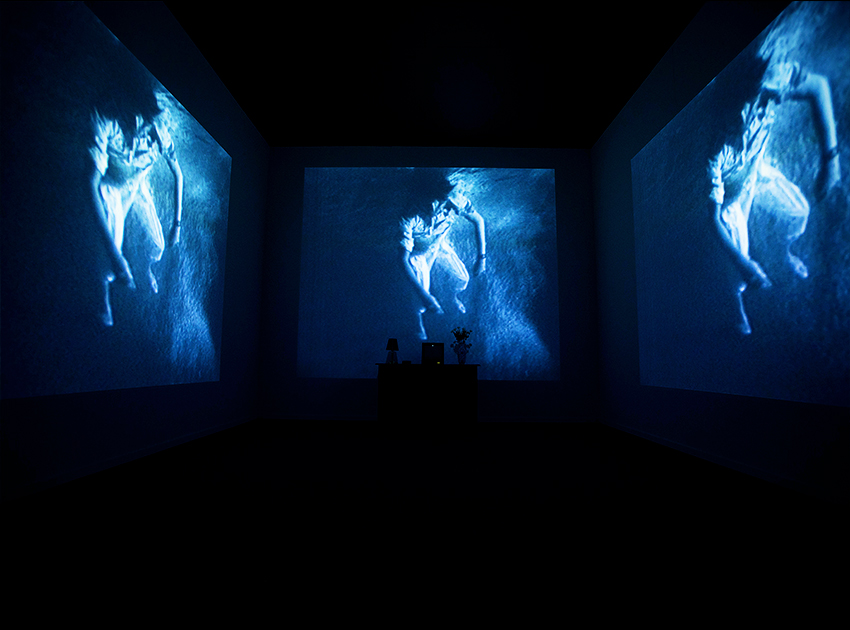 The “Sleep of Reason”, created in 1988, is a room-in-a-room, a room of nightmares, where reality penetrates the “inner state”. Viola mocks up an ordinary domestic space with a desk, a lamp, an alarm clock, a vase and a monitor projecting black-and-white footage of a person sleeping. Every other second, a random chaotic image is projected onto the walls and the objects and shakes the visitors with sinister noises. 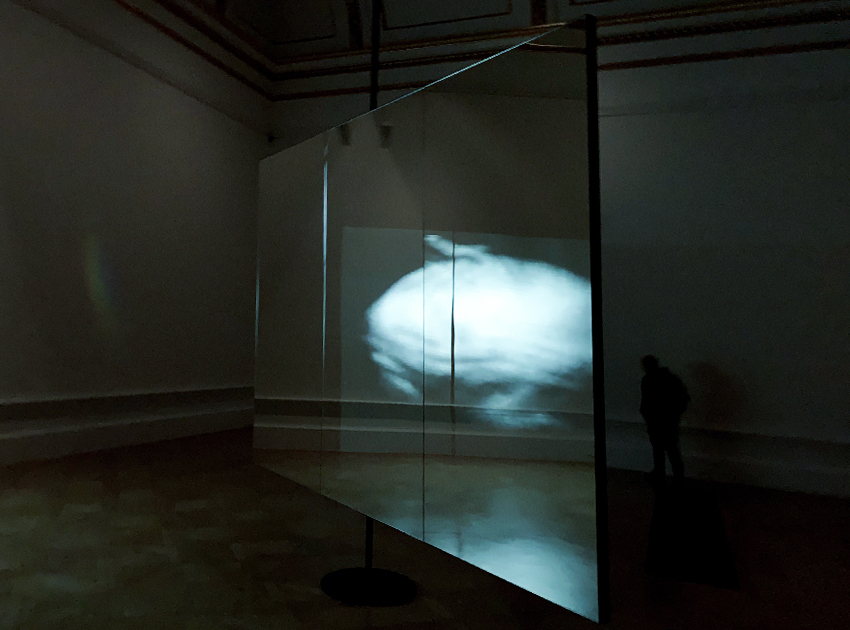 “Slowly Turning Narrative” from 1992, is my favourite. It consists of a very large-size rotating mirror positioned centrally in the room. Various images are projected onto one side, while the other reflects and confronts visitors with themselves. 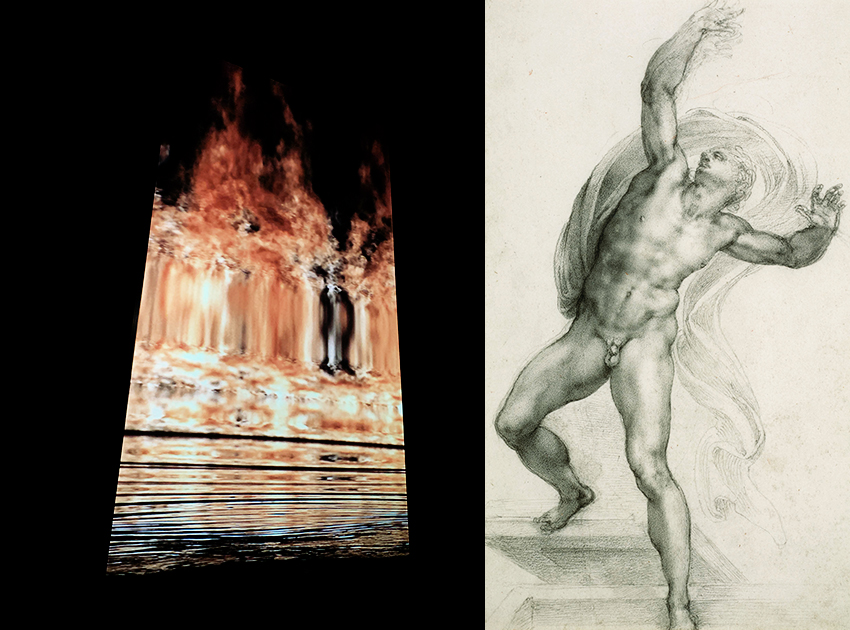 Viola’s and Michelangelo’s works were produced centuries apart, yet the two artists share an abundance of concerns; mortality, spirituality, most notably the transience of life and the inevitability of death. However, the show is set in slow motion, a meltdown between beauty, melodrama and emotional catastrophe. My only concern is that I could not love the show as much as I wanted to.