What is the nature of chance and accident? In a secular context, chance is a series of entirely random events, while in a religious context such events are understood as, in some way, reflecting the influence or direction of the divine. Are such events merely coincidences or Godincidences?

Chance is viewed as a means circumventing conscious artistic creation

Bosco Sodi’s work raises these questions in a very particular form that, as Dr Aaron Rosen explores in his catalogue essay, touches on the nature of creation itself: ‘As much as (Sodi) is fascinated by the factors which contribute to change, his deeper questions revolve around the very nature and necessity of creation… To apprehend the significance of this act, Sodi is no longer content to delve into the earth’s prehistory. His most recent works seek to dig beneath time, to the moment of Genesis itself.’ 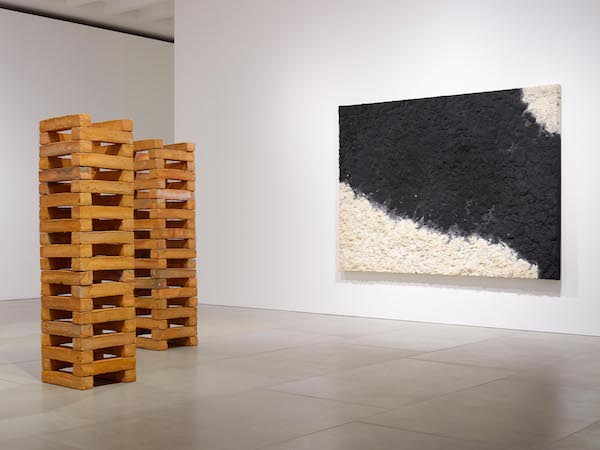 Sodi creates large-scale impasto paintings made with layers of pure pigment (in this case black and white), water, glue and organic materials (including sawdust and natural fibres). Laying the canvas horizontally, these monumental paintings are sculpted by hand over several days. Sodi sculpturally layers his paint mixture and, by using his hands to create, maintains the closest possible physical connection to the mixing, production and application of his materials. He stops work at the first signs of cracking and then gives the process over to time and the elements. The heat of the sun completes the work forming chance cracks and accidental fissures across the surface as the work dries.

In forming this practice, he drew from Wabi-Sabi, a Japanese aesthetic philosophy that embraces imperfection and reveres natural authenticity above all. This philosophy encompasses the multi-layered concept of Yūgen, which describes the evocation of inexplicably deep emotions in response to aesthetic creation and extends to a sense of awareness and acceptance of impermanence. The term reflects both Sodi’s interest in process and his desire to reveal beauty existing in the space between what can be seen. Within this philosophy, a practice like Kintsugi, the Japanese art of repairing broken pottery with lacquer dusted or mixed with powdered gold exists as one tangible example of treating random or chance cracks as something to display, rather than disguise. Sodi’s practice seems to be essentially an equivalent expression of this same philosophy.

Rosen compares and contrasts the finished works with those of Kasimir Malevich, Franz Kline, Mark Rothko and Philip Guston in relation to Sodi’s bringing together two contrasting colours in the same composition for the first time. This decision to work with the contrast of black and white, a development from his previously monochrome images, can be understood as a reference to universal notions of opposing forces. The interplay of light and dark in these works enables Rosen to explore, with imagination and insight, their nature concerning a range of Hebrew, Christian and Islamic scripture and stories regarding the creation event. By contrast, I wish to focus briefly on the process of creation in play here and Sodi’s equivalence with other artists that have built chance or synchronicity into their practices of creation.

The role of chance became a ‘crucial creative strategy’ for many artists associated with Dadaism and Surrealism. For artists such as Hans Arp and Marcel Duchamp, the conscious removal of the artist’s hand from art-making was a means of introducing anarchy while for those like Salvador Dali chance represented a means of moving beyond the ‘constraints of the rational’ and into an equivalent to the world of dreams. The visionary artist Cecil Collins viewed such practices as being a route to the spiritual world within and incorporated them into his teaching at Central Saint Martins. Collins would choose two complementary colours, then, with his eyes shut would paint a number of brush strokes. He would then open his eyes and consider the marks on the paper or canvas. As he looked images would suggest themselves and he would select and paint the one that he wished to impose as the predominate image. The point of the Matrix was to ‘penetrate deeper into the creative imagination so that it is that which speaks to the artist and not the shallower levels of the mind.’ 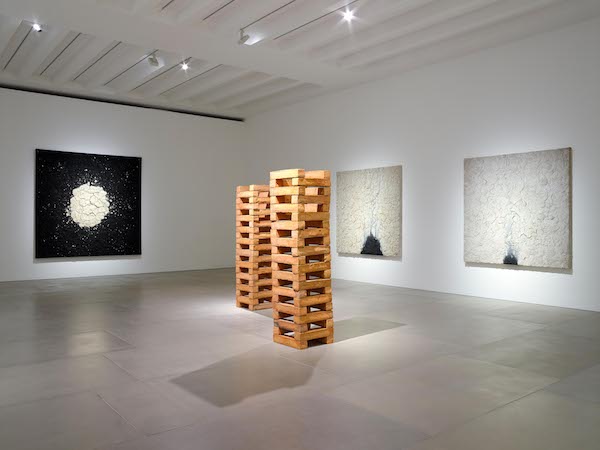 In these practices as used by these artists, chance is viewed as a means circumventing conscious artistic creation in order to tap something beyond. Sodi, by contrast, combines conscious creation with openness to the effects of chance and change and by doing so also reveals the extent that conscious decisions underpinned the seemingly random practices of the Dadaists and Surrealists. Duchamp’s’ readymades, for example, would seem to require a conscious practice of seeking found objects, as opposed to being wholly subject to a chance encounter.

Sodi, as creator, consciously creates conditions – the layering of pigments and the drying of the work – in which chance will complete the work he has begun. His practice, therefore, has synergies with concepts of God that posit an openness to the act of creation and a sense that all possibilities are contained, but not necessarily actualised, within that creative act or process or person. The artist, as sub-creator, creates a world where the possibility of change is built in, which is alive with possibility, where the possibilities are held within the artist’s creation.

In the creation narratives of Genesis that Rosen links to the separation of light and dark created in these works by Sodi’s use of contrasting colours, we also encounter change through the story of human fallibility and failure that Christians call the Fall. This act actualises new possibilities inherent in creation and initiates a story of restitution and repair which has synergies to the aesthetic of Wabi-Sabi.

Rosen has insightfully identified the way in which the finished works in this exhibition depict the moment of Genesis itself. These further reflections on Sodi’s creative practices add to that insight by suggesting that his practices also mirror that same moment of Genesis. As such, these are genuinely creative works.