The Lampedusa cross is made from pieces of a boat that was wrecked on 11 October 2013 near the Italian island of Lampedusa, close to the coast of Tunisia. The overcrowded boat carrying 466 migrants from Somalia and Eritrea caught fire, capsized and sank at a time when there was no official maritime rescue service. Three hundred eleven refugees fleeing persecution and seeking refuge in Europe were drowned. Inhabitants of Lampedusa helped to save the lives of 155 others.

The island’s carpenter, Francesco Tuccio, met some of the survivors at his church and, moved by their plight, made individual crosses for each person. Unable to make a difference to their situation, the best he felt he could do was to use his skills as a carpenter to fashion each a cross from the boat’s wreckage as a reflection on their salvation from the sea and hope for the future. These crosses also reflected the fate of many migrants. 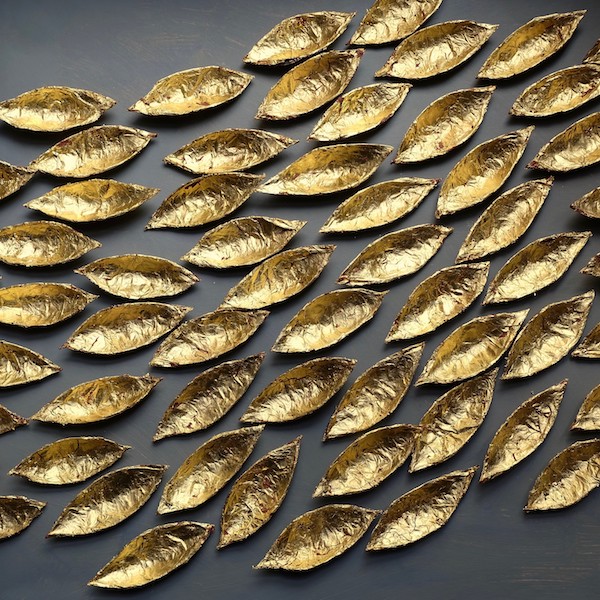 Do the Little Things, © Jake Lever Reproduced by permission of artist Jake Lever

A similar cross was then made for Pope Francis, who carried it at a memorial service for those who had perished. Tuccio also made larger crosses that he gifted as a plea for discussion about community and responsibility – it is in this context that Tuccio made a cross for the British Museum to mark an extraordinary moment in European history and the fate of Eritrean Christians. That cross, carrying poignant messages about kindness, community and the indifference faced by many refugees, is to be toured around the UK as part of a British Museum Spotlight Loan Crossings: community and refuge.

Curator Jill Cook says, “The Lampedusa Cross reminds us of all the histories that are lost and of the thousands of people who are not otherwise remembered. The wood with its paint blistered by the sun and smelling of salt, sea, and suffering embodies a crisis of our times, as well as hope. The cross invites discussion of the varied reactions to one of the great tragedies of our time. It is an artefact shaped by tragedy that symbolises those who have nothing and desperately seek to share in a better future.”

The Lampedusa disaster was one of the first examples of the European migrant crisis and the terrible tragedies that have befallen refugees and migrants as they seek to cross from unstable regions in Africa and the Middle East into Europe. It marks an extraordinary moment in European history and stands witness to the kindness of the people of Lampedusa and as a reference to the ongoing migrant plight today. The Lampedusa disaster led to operation Mare nostrum – our sea – in 2013, by which the Italian navy rescued 150,000 people from the straits of Sicily. The islanders of Lampedusa did not wait for official authority or funding to rescue those in peril on the sea. They shared resources to rescue, feed, clothe, comfort survivors and bury those washed up on the shore. Their kindness altered their formally idyllic life and challenged them with difficult and unwelcome changes.

In this way, the cross invites discussion about the stresses of learning to live cooperatively and touches on the ethical and practical challenges presented by mass movements of people and on how Europe has recently responded to refugees and migrants. As Revd Mark Oakley has said, “The truths to which this small cross bear witness are tragic and terrifying … the dignity of each human person running for his or her life is in danger of being forgotten in the charged and often hate-filled political wranglings of our times.”

Director of the British Museum Hartwig Fischer says, “The wood of the cross is a reminder of the passage, not only of these vulnerable refugees who staked everything on the boats being able to safely transport them, but of the human beings throughout history who have sought refuge on similar perilous journeys. I hope visitors around the UK will connect with the poignancy of the cross and be able to reflect upon the ongoing disruption, upheaval and hope that it symbolises.”

Alongside the cross will be a display of twelve tiny boats from Syrian-born Issam Kourbajʼs series Dark Water, Burning World, made from repurposed bicycle mudguards tightly packed with burnt matches to represent the fragile vessels used by refugees to make their perilous voyages across the Mediterranean. Originally inspired by 5th century BC Syrian vessels from the Fitzwilliam Museum’s collection and seeking to evoke the plight of Syrians, these were made by Kourbaj as a response to the ongoing tragedy in Syria.

Kourbaj says, “Lead was the first material I experimented with when making my boats. I used it for its density, as a response to the many tragedies of sinking boats in the Mediterranean, but also the ancient miniature model ship carrying three goddesses that inspired this piece was made from Lead too. Soon after, I was drawn to bicycle mudguards, which are designed to protect from the mud, yet sadly many Syrians and many others were not guarded by the flimsy boats, lead-like, that they were so desperate to take to escape the destruction. Spent matches speak about the people of the boats, with burnt parts to reflect the trauma that those women, children and men carry with them, while water-like resin holds these burnt matches together, just as we all bond, hold and support each other in desperate times.”

The boats have been nominated as the 101st object in the British Museum and BBC Radio 4’s ‘A History of the World in 100 Objects’. A 10th-anniversary programme was broadcast to reflect on the major issues which have affected the world in the past decade. Neil MacGregor described how, “Kourbaj’s little convoy of matchstick figures stand for all migrants, anywhere, driven by fear, guided by hope.” The boats convey the fear and exhaustion of the crossing and the trepidatious uncertainty of survival. In utilising cheap and discarded materials that might otherwise go to waste as the basis for the artwork, Kourbaj represents the need for refugees to use what they can freely acquire following separation from their homeland while urging the global community to find value in everything and everyone, no matter how humble their origins.

The Dutch National Museum of World Cultures has also invited Kourbaj to curate an intervention Fleeing the Dark in the Tropenmuseum Lichthal, where he combines his own artworks with objects from the collection that inspire him. The intervention marks ten years since the start of the crisis in Syria. The installation of 4,381 miniature boats extends diagonally across the hall and counts the number of days, weeks and months since the beginning of the crisis in Syria. Each boat for the number of days contains a seed, which symbolises renewal and growth. With this, the artist shows that even in the darkest of times, growth and hope are still possible.

The Lampedusa cross 2, Francesco Tuccio, 2015, wood © The Trustees of the British Museum

Similarly, engaging audiences in questions of identity, belonging and sharing our world, the Spotlight Loan display will also be accompanied by powerful and engaging programming that ties to these themes at each venue. Partner venues will encourage the sharing of stories amongst local communities, including those with migrant experiences of their own. Other activities will include creative workshops with art pieces responding to the cross, talks with refugee artists and time spent by the public with the collections to offer new perspectives and objects on what represents their locality.

The additional programming at Coventry Cathedral includes Do the Little Things, an installation made by artist Jake Lever for the Chapel of Gethsemane (22 May – 28 June). It comprises of a multitude of tiny boats made of wire, tissue paper and gold leaf. The title refers to the words of Saint David, who, in 589 AD, encouraged his followers to “Be joyful, keep the faith and do the little things”. Throughout the pandemic, he has been making these tiny, fragile, gilded boats, sending them by post to those he cares about. Others have joined in creating a participatory project and hundreds of similar vessels are being sent across the globe as tokens of love, solidarity, gratitude and connection.

He explains that: “Through the pandemic, I have wanted to connect with people I care about, but have often found myself lost for words, unsure what to say. Instead, I turned to making tiny golden boats, sending them to people by post as a kind of silent, wordless communication, heart to heart. These voyages have begun to form a web of connection and many others have started to join in, sending their boats to family and friends across the globe. Collaborating with others, I plan to map these journeys as a visual expression of our universal human need for belonging and connection.”

Lever is an artist who is interested in the power of visual art to draw us into an encounter with the sacred. He seeks to make work that invites a slowing down, a return to the liminal and the “real”. Yet, in the pandemic and in “the face of so much devastation, trauma and loss,” he has “felt both helpless and complicit, struggling to know how to respond in an honest way.” Taking inspiration from St David’s urging to ‘do the little things’, he made the tiniest soul boats he possibly could and sent them off in the post. “In the face of increasing isolation and uncertainty,” he says, “I wanted to convey a sense of journeying with them and cherishing them from afar.” That impulse is one that would seem to be shared by all the makers contributing to this tour. Would that we all felt the same.

Top Photo:  Trustees of the British Museum, Reproduced by permission of the Syrian-born, Cambridge based artist Issam Kourbaj

Do the Little Things