What would Turner think? Would he even have recognised the artist collectives nominated for this year’s prize in his name as art? His own concerns were for the luminosity and possibilities of paint, how it could be moved around the canvas to convey a fleeting moment, the changing weather, the turbulence of skies, the great storms out at sea, what it felt like to be part of this physical, sentient world. He even (probably apocryphally) lashed himself to the mast of a ship in the centre of a storm in order to experience it more fully.

The conceptualism that emerged in the late 1960s was a revolt against this romanticism that prevailed through the 19th century on into modernism, a movement Greenberg defined as the historic tendency of art towards autonomy, achieved by attention to the specifics of that practice, concerned with its traditions and materials, with its own set of practices that set it apart from other art practices. ‘Truth’ and ‘authenticity’ were the backdrop to this humanism. According to Victor Burgin “in post-modernist allegories ‘Truth’ has been replaced by the twins ‘Relativity’ and ‘Legitimation’. The collectives nominated for this year’s Turner prize are concerned with cooking, with the rights of QTIBPOC communities and other social issues that have come out of the pandemic – all worthy in their own way – but painting doesn’t get a look in. It’s as though it’s dropped off the artistic agenda. All through the 20th century painting was declared dead with predictable frequency, left playing catch up with Dadaism, conceptualism and other ‘isms’, scrambling to find a new, relevant language. Whether through the ocular distortions of cubism, the gut-felt intuition of Pollock’s drip-paintings or the spare minimalism of Agnes Martin, painting strove to re-invent itself, to stay new, to remain relevant. So what of painting now? Does it continue to have things to say that can’t be better explored in other media such as video, sculptural installations of even text? Has it run its course or is there still room for reinvention in this very limited and difficult medium concerned with making beguiling images on a flat surface. 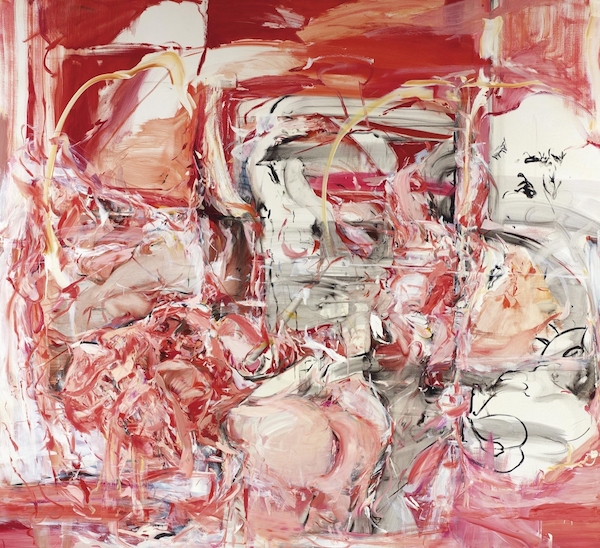 Cecily Brown: The Girl Who Had Everything 1998

Cecily Brown is one such painter who has attempted to extend the life and language of painting. Born in London in 1969, she studied at the Slade School of Art, a college known for its historic connections to painting. Distancing herself from the emerging YBAs, she moved to NY in 1994 where she quickly gained attention for her work. Her major break came not long after her arrival when, in 1997, she had a solo show at Deitch Projects, ‘Spectacle,’ which featured a series of garishly coloured paintings of rabbits engaged in playful orgies. She soon become known for works that captured bodily sensation through the lush applications of paint. With true postmodernist panache she plundered ideas from Old Masters and the Abstract Expressionism of Willem de Kooning and Joan Mitchel Brown, poached with aplomb whatever took her fancy from Goya to British landscape painting in order to create highly wrought works with a sense of intuitive abandon.

In her 1998 painting The Girl Who Had Everything, she melds the figurative and the abstract to create a new painterly grammar, filching the shiny bits of art history with magpie abandon. There’s an impudent irreverence to the voluptuous surface with its gut and blood reds and calamine pinks, its swirls of meaty colour reminiscent of Soutine and Bacon set alongside girly ice cream shades. A carnal sensuality to the explosive brush works and restless paint. A mix of tough knowingness and I-don’t-give-a-fuck, reminiscent of Cy Twombly’s chthonic Bacchus series. But where Twombly bought into the romanticism of classical myth, Brown’s lush carmine swirls swell and bloat erotically to suggest tumescent and menstruation with her tongue firmly in her postmodern cheek There’s sexuality and violence here, but it feels more porny, more playful, more Saturday night rave than distraught Bacchae.

And there’s a feminist edge. A bawdiness to the canvas similar to that expressed by the 18th century female sex workers in the racy TV series Harlots where they were distinctly mistresses of their own eroticism. Brown may be luxuriating in her fleshy tones, the sexuality of her visceral paint but there’s always something playful about the work, as if it’s giving you the wink and telling you not to take it too seriously. That it is fun, just glorious fun. And like all good feminist artists she’s busy inverting the male gaze, owing female sexuality from the inside out. There’s a constant change in perspective and tempo. Likened in the past to film that’s everchanging, her images coalesce, breakdown and fracture. Things morph and mutate like the music of a wild jazz musician pushing his discipline to the edge to see if it will collapse. Whilst she has said her paintings ‘are not usually a direct copy after one thing’, they metamorphose through the drawing process to ‘end up coming out in other twisted ways in the paintings’.

Painting may well have come close to needing life support in the last few decades, to have been left gasping on the gurney of an unappreciative artworld more interested in the instant gratification of video and performance, but Cecily Brown has shown that however many times it’s declared dead and the great gurus of art history called in to proclaim the last rites, there’s always an artist willing to find its pulse, to revive it into yet another lease of creative life.