Throughout its history, St Martin-in-the-Fields has looked beyond its own doors and played an active role in wider social, humanitarian and international issues. In this way, it has helped to form the world around it. This legacy includes involvement in the founding of many charitable and cultural organisations, including Amnesty International, Shelter, The Big Issue, The Academy of St Martins in the Fields and Central Saint Martins. Of these, the involvement of St Martin’s in the formation of Central Saint Martins is the least known, although the earliest instance of involvement in initiating these significant institutions.

The Revd Henry Mackenzie, who later, as Bishop of Nottingham, became the first suffragan bishop in the Church of England since 1608, became Vicar of St Martin’s in 1848. Mackenzie, and others, were concerned that industrial education should be developed and allied to the religious and general education already provided by Church schools. Art education was intended to form part of this industrial instruction for apprentices and, accordingly, St Martin’s School of Art, was established in 1854 being founded by the parochial authorities of St Martin-in-the-Fields. 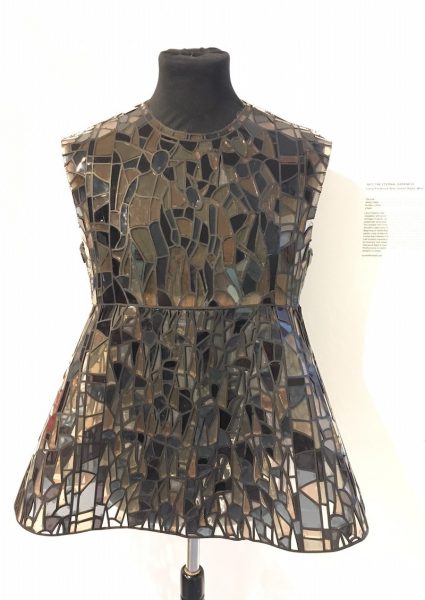 Into the Darkness by Larry Frederick Alan & James Bizby Weir

Angela Sanchez del Campo and Mark Dean have noted that this ‘interest in design education was not a casual one’: ‘A few years before, in 1851, the importance of design and industrial manufactures were highlighted in the first international exhibition of manufactured products in London, known as The Great Exhibition. A year after the Great Exhibition, in 1852, the V&A Museum, formerly known as the South Kensington Museum, was established, with its first collection being formed by many of the objects from the Great Exhibition. The principle of the museum was to make works of art available to all, to educate working people, and to inspire British designers and manufacturers.’

The art school soon became independent, eventually merging with Central School of Art, and now part of University of the Arts London. Central Saint Martins has become an internationally recognized centre for art and design education and research, now based in Kings Cross. However, in their different ways, Central Saint Martins and St Martin-in-the-Fields continue to share a common concern for social responsibility based on the belief that the creative growth of individuals, within a supportive and challenging community, can lead to the renewal of society.

central saint martins in the fields is an exhibition of work by ten recent art and design graduates from Central Saint Martins held in the Crypt of St Martin-in-the-Fields which aims to explore the links between the two institutions. Based on the link between the two, the exhibition pays tribute to the artists and designers who are part of the college and also to show new trends and research by students.

Two of the textile designers featured, Park and Bizby-Weir, contribute fabrics with religious references. Park has made a religious protection garment inspired by a variety of religions and rituals, including hand embroidery in each corner of the pattern to protect the garment and himself. ‘Into the Eternal Darkness’ by Bizby-Weir is derived from a Medieval men’s tunic, with a surface design made to emulate a cathedral’s stained glass window, created by laser cutting leather and plexiglass, then hand sewn down onto a base.

Urban imagery, with synergies to St Martin’s Central London location, features in the work of Statham and Szabò. Statham’s ‘Acoustic Wool Felt Panels’ project is inspired by the research I developed in Carcassonne, Toulouse and Gruissan, collecting and recording the imagery and documenting colour through structure. She captured the distressed building blocks, whilst recording the pastel colours which dominated the streets and peculiar shapes taken from the shiny, rustic iron works. Hungarian ceramic sculptor Szabò is fascinated by decayed surfaces of machinery and ruins of buildings. ‘Wreck n.2’ resembles an abandoned object in an archaeological find, but with no reference to a real object; such an artefact may awaken the inherent curiosity of human kind to further investigate.

The architectural rendering on which Baier’s collage ‘Orianda, Grand Atrium’ is based depicts the design for an atrium of Schloss Orianda on the Crimea Peninsula. Neo-Classical architect Karl Friedrich Schinkel envisioned a summer residency for Alexandra Feodorovna, empress consort of Russia. The design, however, was never realised, becoming a virtual space, an imaginary space of potentiality. Baier’s collage fills Schinkel’s proposed atrium with a variety of photographic representations; representations of events that happened in the period of time between then and now. The (utopian) depiction of spatiality by means of linear perspective is used and enhanced in the manner of the grotesque, adhering to it formally but subverting it in its content.

Illingworth has created a triptych which is comparable to an ornamental room divider; each panel being the size of a door. The scale of each wooden board is purposely put in relation to the architecture of a western home – home being a key word. The work being two sided represents the idea of how the world can be perceived as a flip side. The skeletal shapes shown in woodcuts on one side are a suggestion of the different layers to a person, while on the other are energetic, fluid lines mixed with an expressionist use of colour. Engaged by different characters that she comes across in her day-to-day life whilst living in London, she explores her own perception of stereotypes and through that questions her own identity.

Similarly Damele’s project ‘Exiles’ comes from a desire to represent the constant sense of anguish and struggle we go through as we try to give a meaning to a fragile and fleeting life. She captures a feeling of loss and estrangement in the expressions and gestures of the people she photographs on the street in her neighbourhood. The screen prints of these images on bin bags emphasizes the idea of daily life being perceived as shallow and valueless, while we search for a deeper understanding of existence and long for a more complete dimension.

Burgess’ artwork comes from a culmination of different reference points, each illustrating made-up ‘hybrid-humanoid’ characters, often created from encounters with different personalities in our modern society. These challenge the notion of our cultural expectations and break down clichés or gender ambiguities.

Textile designer Southern’s menswear collection ‘The Mind’s Eye’ combines explorations of identity with issues of mental health and wellbeing among young men. Her woven fabrics incorporate imagery and text to help young men communicate what they and many others are thinking. The collection allows the wearer to actively wear their ‘mind’ on their sleeve thereby reducing social isolation and stigma surrounding mental health difficulties. She strives to design with a conscience, exploring issues and solving them through innovative concepts and striking design.

Similarly, Moore’s work, in pen and ink, is a form of reportage, documenting culture, human environments, and anywhere that displays ‘the strange’ in society’s behaviour. ‘A Work-Day Hieroglyph’ is a sequential narrative telling a dark but humorous story of the psychological effects that a mundane job has on us and how it makes us behave. From the pain of getting out of bed, the moodiness of the rush-hour, being belittled by your supervisor, and then finally to the debauchery that comes when we’ve finally been freed; the drinking, smoking, drugs and sex that we can often regret in the morning. ‘Gin Lane 2016’, commissioned by the Royal Society For Public Health to commemorate their 160th anniversary, is a modern day interpretation of William Hogarth’s famous cartoon ‘Gin Lane’ (1751). Gin Lane 2016 reflects current public health issues, the main ones being obesity and mental health.

This show has been approached in terms of building revived links between the two institutions creating scope for a relationship that can grow by building on the historical connections combined with the foundations built through the planning of this exhibition. central saint martins in the fields demonstrates the common concerns between an internationally recognized centre for art and design education and research and a church that actively engages with contemporary art in its commissioning and mission.