There was a time when Nativity exhibitions routinely featured among the Christmas offerings from London Galleries. Those days are no more but as galleries and curators now acknowledge the extent to which many artists engage with questions of faith and spirituality, it is not hard to find exhibitions exploring such questions at this time of year.

Many artists engage with questions of faith and spirituality

Fruits of the Spirit: Art From the Heart is a new virtual exhibition and in-person collection trail exploring sacred art and its relation to today’s world. Devised by the National Gallery and museums throughout the UK, the exhibition pairs nine pictures from the National Gallery’s collection with nine from partner institutions and is inspired by Saint Paul’s description of themes including love, joy, and peace. The exhibition includes paintings by Jan Van Eyck, Vincent van Gogh, Frank Auerbach, Turner, Titian, Ernst Neuschul, Eugène Delacroix, Ron Stenberg, Orazio Gentileschi, Andrea Soldi and Thomas Gainsborough. The 18 paintings in the exhibition range across half a century of art history, from van Eyck’s enigmatic ‘Arnolfini Portrait’ to contemporary artist Lizzie Jones’s ‘Couple’, a moving image of two people who have survived a traumatic civil war.

The paired paintings open discussions around Saint Paul’s nine positive attributes in his letter to the Galatians: love, joy, peace, patience, kindness, generosity, faithfulness, gentleness, and self-control. The letter discusses how to build and maintain community in the face of disagreement and the nine attributes are positive and helpful for individuals and communities whether within religious or secular contexts.

Winifred Knights (1899–1947), Scenes from the Life of Saint Martin of Tours, c.1928–33 on canvas with glazing Milner Memorial Chapel, Canterbury Cathedral. © The Estate of Winifred Knights

Canterbury Cathedral’s altarpiece, ‘Scenes from the Life of Saint Martin of Tours’, 1928–33, by Winifred Knights, is among the works featuring in the exhibition. This is a powerful example of religious art by a British woman of the last century. This painting represents ‘peace.’ Knights’s painting is paired with Claude Monet’s ‘Water-Lilies’ from the National Gallery’s collection. Monet described this work, painted during the First World War, as a ‘monument to peace.’

Fruits of the Spirit is co-curated by the National Gallery’s 2021–22 Howard and Roberta Ahmanson Fellow Revd Dr Ayla Lepine and Senior Research Curator Dr Susanna Avery-Quash, who leads the Gallery’s Art and Religion research strand. The exhibition is accompanied by a series of events held at the National Gallery and at partner locations across Britain throughout the exhibition period. Participating organisations come from a range of new and established partnerships from locations and venues as varied as Canterbury Cathedral, The McManus Art Gallery and Museum in Dundee and The Box in Plymouth.

Vestment, a new series of tar paintings or “torch works” by Theaster Gates, which explores spiritual and stylistic hierarchies, religious garments and aggrandizement, and the symbolism and universalism of nationhood. In this exhibition, the priestly vestments present throughout Russian filmmaker Andrei Tarkovsky’s Andrei Rublev (1966)—a seminal film that anchors Gates’s artistic study of the late scholar Robert Bird’s archive of Russian film, philosophy, and literature serve as a gateway for further investigations of ritual, sacred acts, ranking, and symbolism.

The ubiquity and iconography of the cross is central in these new tar paintings which are a distillation of key themes with which Gates has grappled over the past year and throughout his practice. His recent meditations on the legacies of Russian Suprematism and Constructivism, along with the technical restraint and conceptual rigor of artists such as Josef Albers and Agnes Martin, are invoked as he considers the cross both, as a politically galvanizing device and motif of religious social form.

From his work in clay to these tar paintings, the ritual of fire and the alchemical power of the flame is clearly fundamental for Gates in his practice. Through these means, he challenges us to reconsider the stylistic grading of humble materials and labour-based practices, such as those of his father, a roofer, while also reminding us of the religious uses to which such practices are put. It may be that there is here, also, an implicit reminder that the Christ who died on the cross was himself a carpenter.

Exodus is an exhibition of new work by Anselm Kiefer in New York and Los Angeles which shows the ability of creative work to traverse between the earthly and the divine. Employing a wide range of materials that mix the mundane and sublime, these works are imbued with alchemical symbolism.

The exhibition in New York features paintings of monumental buildings and ruins, their architectural symbolism being permeated with themes found throughout Exodus. Full of symbolic thresholds between peoples, places, and times, the paintings – which incorporate inscriptions in Hebrew from the book of Exodus – are metaphysical allegories that meditate on loss and deliverance, dispossession and homecoming. Danaë (2016–21) anchors the New York installation, fusing a representation of the vast interior of Tempelhof Airport in Berlin with the ancient Greek myth of Zeus transfigured into a shower of gold through prominent use of gold leaf. The story of the site, which was built in an area belonging to the Knights Templar in the Middle Ages, opened as an airport complex in 1923, extensively developed under the Third Reich, played a critical role in the Berlin Airlift during the Cold War, and, as a decommissioned facility, was recently used to provide temporary shelter for refugees, provides a profound connection to the main themes of Exodus.

In the works on view in Los Angeles, Kiefer further elaborates themes of loss, history, and redemption. The link between the terrestrial and the celestial is marked by the ladder between the two spheres in En Sof (2020–22) while Exodus (2012–21) has a demarcation between a lower register with a landscape of paint and straw affixed to the canvas, and a dynamic composition above that whirls in concentric circles that envelop a bike. Kiefer goes to the narrative of the parting of the Red Sea found in Exodus And with the blast of thy nostrils the waters were gathered together, the floods stood upright as a heap (2020) where a suspended sculpture of a modern naval vessel stands in for the destruction of the pharaoh’s military. In these works, Kiefer’s syncretic approach to materials extends to his understanding of history, literature, and mythology as forces informing the present. 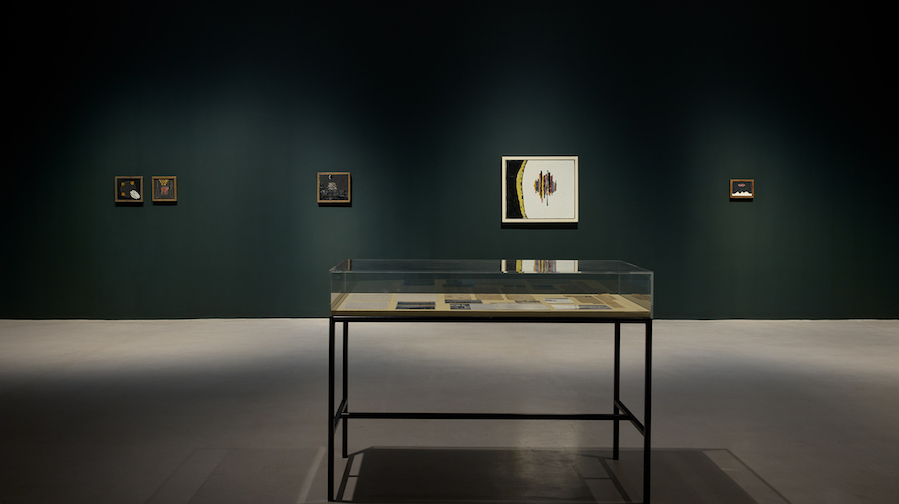 Forrest Bess, an American artist, visionary and fisherman who lived on the Gulf Coast of Texas but exhibited with Betty Parsons Gallery in New York, was also deeply influenced by various cultural, spiritual and mythological systems of thought, including aboriginal cosmology, medieval alchemy, eastern philosophy and Jungian psychoanalysis, as well as his own experience as a gay man living and working in rural Texas.

Out of the Blue at the Camden Art Centre focuses on his visionary paintings from the late 1940s through to the early 1970s, with a particular emphasis on the abstract forms and symbols that speak to his unique understanding of the universe: physically, spiritually and psychologically. These are presented alongside archival material relating to Bess’s ongoing research project around the conjunction of male and female energies and anatomies that preoccupied him for much of his life and which culminated in him undergoing various surgeries as he attempted to achieve a state of ‘pseudohermaphroditism.’

In his modestly scaled and highly personal paintings, he developed an enigmatic painterly language, informed by visions that appeared to him on the threshold between wakefulness and sleep. The signs and symbols that populate his pictures were drawn from an exploration of his own unconscious, although he also connected them to Carl Jung’s theories of a collective unconscious.

Although living in relative isolation, Bess entered into extensive correspondence with eminent researchers, enjoyed a close and lasting relationship with the art historian and academic Meyer Schapiro and saw his work exhibited regularly at Betty Parsons Gallery – Parsons being one of the most influential dealers at the time, who also represented Mark Rothko, Jackson Pollock, Barnett Newman, and Robert Rauschenberg.

As his paintings were conceived in darkness, as night-time visions, he expressed, in a letter to Parsons, his desire to see his works hung in a “dead black gallery.” This exhibition marks the first time his works have been presented together in this way and continues the long and respected history of the Camden Art Centre in platforming exhibitions of significant 20th century artists who have been overlooked in the UK, while also engaging with themes of spirituality. This approach is motivated by an awareness that such artists offer a particular, timely and relevant source of inspiration to contemporary artists and their practices, as well as speaking to urgent issues and ideas of our time. 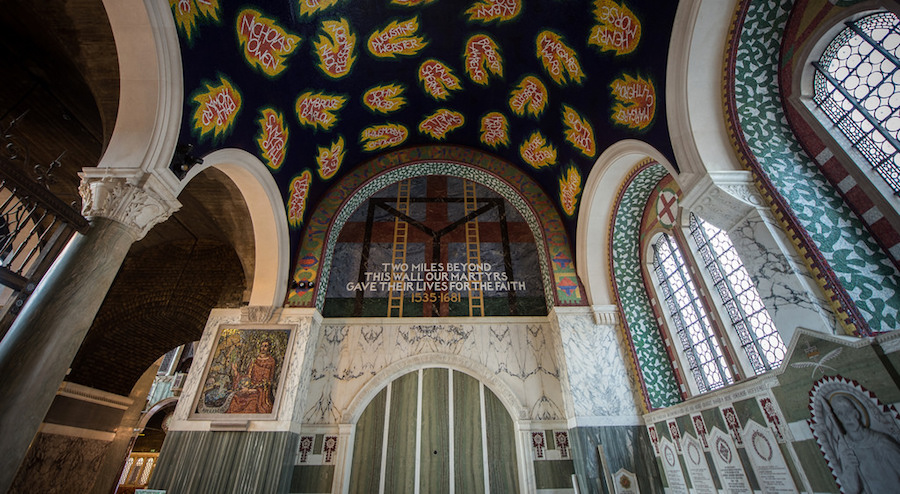 Tom Phillips CBE RA, who recently died, was one such. Artist, essayist, composer, poet, art historian, translator, he is best known for A Humument, his a radical ‘treatment’ of a forgotten Victorian novel utilizing collage, cut-up ornament and other techniques, creating new works of art and poetic text from the original pages.

Among the celebration of polymathic interests and achievements, it should not be overlooked that he created significant work for the Church, particularly Westminster Cathedral. Two marble panels relating to Elgar’s Dream of Gerontius were created for the Chapel of the Holy Souls and installed in 2003. These were followed by a mosaic of John Henry Cardinal Newman in 2008, also for the Chapel of Holy Souls, and a complete decorative scheme for the Chapel of St George and the English Martyrs that was completed in 2016.

With this latter scheme, Phillips emblazoned the names of the forty catholic martyrs in mosaic across a dark sky in the chapel vault and their suffering is recalled by a depiction of the Tyburn gallows in marble intarsia on the west wall. On the east wall his radiating marble design focuses the chapel’s decoration on the relief by Eric Gill that stands over the altar.

For the installation of the Gerontius panels, Phillips wrote that it had been “a great thrill to be asked to make a contribution to the splendid fabric of Westminster Cathedral, which I have known since I first attended High Mass there as a schoolboy fifty years ago.” He said that his work had often centred around devotional subjects but that there was an “extra excitement in making art for a living church.”

Noting that the Dream of Gerontius tells the story of an old man’s dying vision of the journey of his soul, he hoped that his panels “might become a focus for meditation for those with elderly friends or relatives about to make that same journey.” Now that Phillips himself has made that same journey, the chapels he decorated at Westminster Cathedral serve as a focus for meditation on his unique vision.