I really enjoyed attending the FOG Design+Art Opening Gala in San Francisco on the 19th of January. The Fair took place at the Fort Mason Festival Pavilion, which provides a spectacular view of the Bay area. With only 45 galleries, FOG Design+Art looked more like a Salon than an Art Fair. But there was a palpable sense of excitement as gallerists, collectors, artists, and art lovers met each other again. In addition, the 2021 edition of the Art Fair had been cancelled for health reasons, so there was a real thirst to see Art in person.

There was a good roster of US-based and international galleries. The “usual suspects” were present such as David Zwirner, Hauser & Wirth, Marian Goodman, and even White Cube as a first-time exhibitor. It was a real treat discovering new galleries and artists while wandering around the alleys of the Fair. 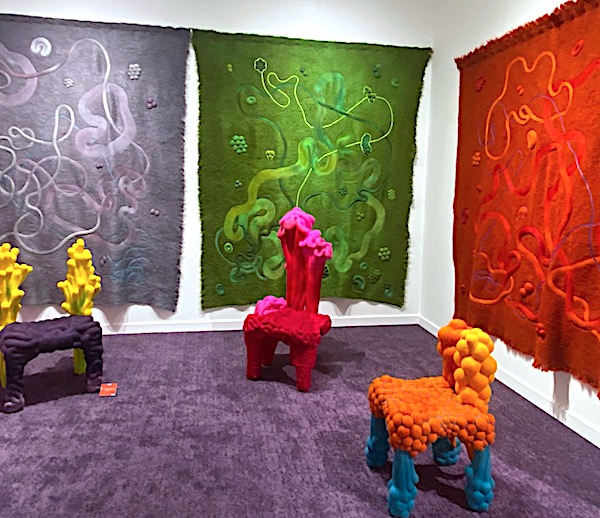 The San Francisco-based gallery, Jessica Silverman, which has a beautiful new space in Chinatown, had a great selection of artists, including Clare Rojas. I was taken by the serenity and the narrative of her painting: “Just watching”, depicting the back of a character (I was told it is Clare’s mother) contemplating a (rather typical) North California landscape. The subtle colours and flatness of the landscape in the painting are an invitation to meditate and reflect on nature. Not surprisingly, it sold at the Fair. Clare Rojas is a San Francisco-based artist of the “Mission School”.

Liam Lee’s installation at Patrick Parrish Gallery from New York was playful colourful and investigates the boundaries between Art, Architecture and Design. The young Brooklyn-based artist conceived the presentation displayed in San Francisco during the lockdown, using wool as a medium to create this “Alice in Wonderland” piece as an escape from our current gloomy reality. I was pleased for him that SFMoMa acquired his work.

Another discovery was Nina Childress’ paintings at Nathalie Karg Gallery from New York. The American-French artist born in Pasadena currently has a significant exhibition in FRAC (Fond Regional d’Art Contemporain) in Bordeaux, France, with 90 paintings from 1980 to 2020 on show. She paints glamorous feminine icons from the movies, music or club scene. Some of her paintings use fluorescent acrylic on canvas that glows in the dark as a fun twist or a reminiscence of the artist’s punk years?

A younger painter investigating the woman’s body is Elana Bowsher at Alexander Berggruen Gallery from New York. The LA-based artist explores the female body, forms and shapes. She describes her paintings as “feminine”. I liked the cartoon-like feel of her work, how she paints postures, patterns and clothes, and creates a feminine atmosphere, light and fresh. 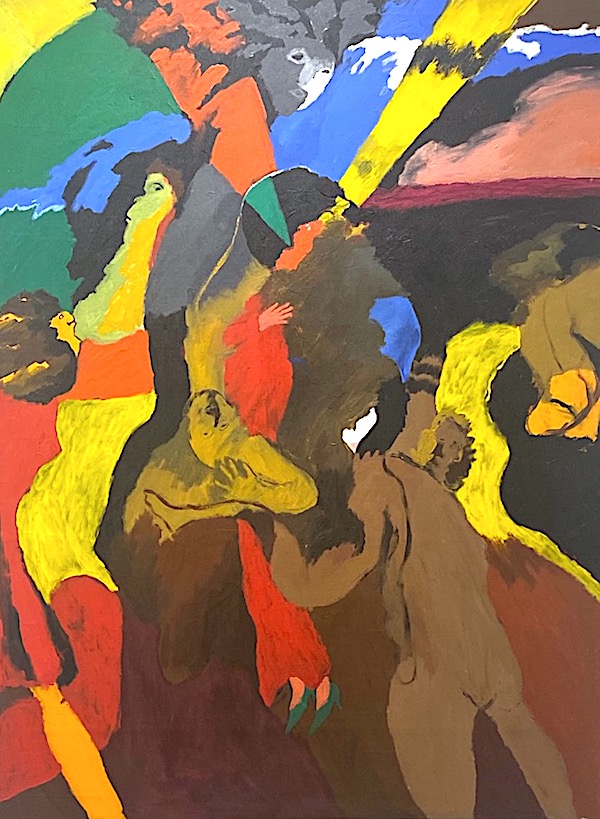 A significant female artist, Simone Leigh, was exhibited at Matthew Marks gallery. Her ceramic purity and simplicity convey a striking beauty of the African woman’s bust. Ceramic is becoming a fully recognised medium for Contemporary artists. I can’t wait to see Leigh’s work at the Venice Biennale, representing the US.

Blum and Poe presented a powerful and colourful solo exhibition of Robert Colescott. Born in 1925 in the Bay Area, he travelled all his life extensively. He lived in Paris, studied with Fernand Léger, and spent several years in Egypt in the late ’60s. His work is satirical, full of humour & intensively colourful. By the end of the Fair, the gallery had sold more than half of its pieces.

Seeing the works at Tina Kim Gallery of the Korean Masters, Ha Chong-Hyun and Kim Tschang Yeul – both of whom I had the pleasure to work with – was one of the highlights of my visit.

I was surprised not to see any NFT presentations. Being next to Silicon Valley, I would have expected to see some NFT works more than in any other place. Obviously, the Art Fair format has not yet ventured to the new form of Art, which is the hot topic these days.

I left San Francisco contented to have been able to visit the spectacular Joan Mitchell retrospective at SFMoMa. The vibrant colours, the nervous strokes and the energetic movements were mesmerising.

I’m now getting myself ready for my next adventure: Zona Maco in Mexico City!