The Herrick Gallery, London is currently presenting a selection of drawings purportedly by the great British painter Francis Bacon, lent by Cristiano Lovatelli Ravarino to David Edwards, the brother of John Edwards, to whom Bacon left everything when the artist died in 1992. These works are juxtaposed with new paintings by Darren Coffield.

But the eight pencil & graphite drawings and two pastel collages said to be by Bacon, have had their authenticity contested after previous drawings attributed to the artist were rejected as fakes by Martin Harrison, the author of the forthcoming catalogue raisonné of Bacon paintings, undertaken for the Francis Bacon Estate. 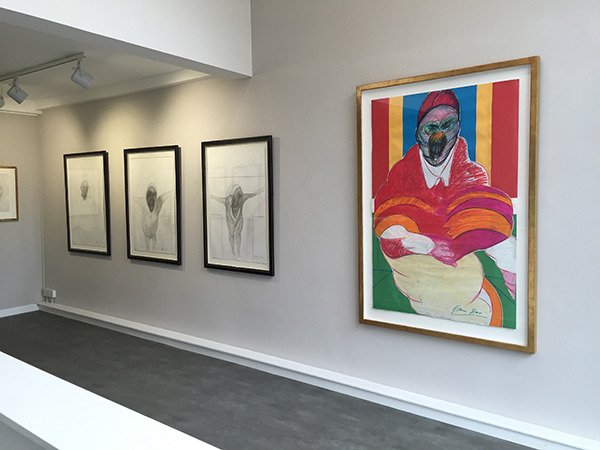 Paul Black spoke to Director and Curator Alice Herrick and Clive Jennings, Consultant to the Herrick Gallery, and Director of the National Print Gallery, concerning the raging debate surrounding the works, considering Francis Bacon fervently denied making drawings of any kind. Although an exhibition of the artist’s sketches were in fact exhibited after Tate acquired a number of drawings by the artist and displayed them in ‘Francis Bacon: Working on Paper’ in 1999. So was Bacon’s denial in fact an act of mischief to maintain the ‘magical existentialist shaman’s’ reputation?

Herrick Gallery was founded in Shoreditch in 2012. Drawing inspiration from part domestic, part public gallery spaces like Kettle’s Yard and the Artists’ House, Roche Court. In 2015 Herrick Gallery launched in Mayfair in newly refurbished premises over three floors on Piccadilly with views across Green Park. The gallery collaborates with established artists as well as discovering, nurturing and promoting emerging artists, and hosts talks and events as part of its exhibition programme.