Painting for me is a set of connections, a set of sensations of conflicting movements and experiences, which somehow, one hopes, has congealed or cohered or risen out of the battle into being an image that stands up for itself. – Frank Auerbach

How do you make sense of your life if on your 8th birthday you’re put on a train in Germany with a neatly labelled suitcase, to be bundled out of the country, never to see your parents again? Such was the fate of the painter Frank Auerbach, sent in 1939 to England only to learn, years later, that his parents had perished in Auschwitz. He has always claimed that he had a happy childhood at Bunce Court, the liberal boarding school that catered for the children of refugees and intellectuals, that he never enquired into the details of his parents’ death. ‘I did this thing which psychiatrists frown on; I am in total denial. It’s worked for me very well…I went to a marvellous school, and it was truly a happy time. There’s just never been a point in my life when I felt I wish I had parents.’ Those same psychiatrists might suggest that the coping mechanism for this emotional trauma has been his obsessive commitment to – above anything or anyone – his role as a painter. Though he has admitted, elsewhere with more candour, that: ‘I was always aware of death because of my background. And, in some curious way, the practice of art and the awareness of the imminence of death are connected.’ Frank Auerbach has always painted as if his life depends on it. 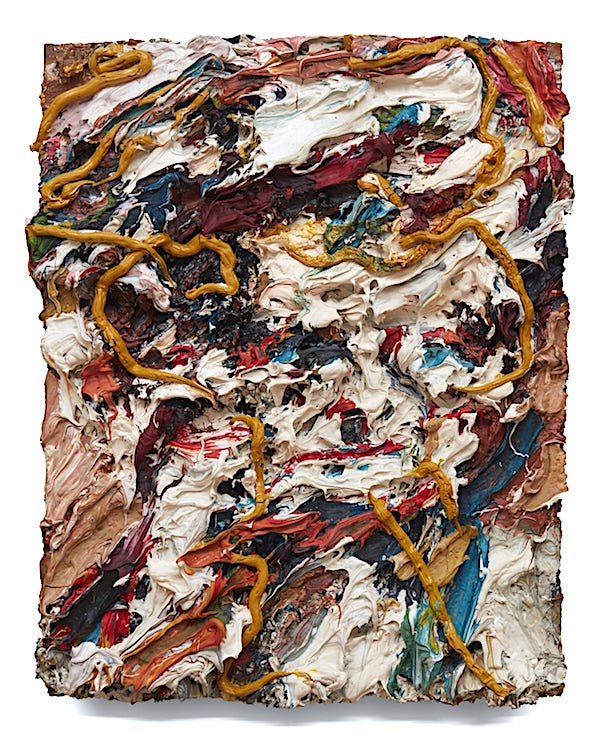 One of this country’s most challenging post-war artists, he has rigorously eschewed isms and movements. Arguably, his most important influence was his tutor David Bomberg whom he met when, as a 16 year old new to London, he enrolled at the Borough Polytechnic. He realised, early, that to be serious, he had to bring ‘some experience that is your own and to try and record it in an idiom that is your own, and not to give a damn about what anybody else says to you.’ He is notoriously reclusive and works every day without fail, wrestling in his own complex and determined way in his sparse studio with the materiality of paint to create unique images that say something new about the world. He does not make ‘pictures’, he does not copy what he sees in front of him in order to flatter or to make something ‘artistic’, pleasing or decorative. Rather he tries to describe the thingness of the thing in front of him. Its essence. He might be described as the Gerard Manly Hopkins of the art world for the late 19th-century poet-priest Hopkins broke new ground with his concept of ‘inscape’, by which he meant the unified complex of characteristics that gave each thing its uniqueness and yet differentiated it from everything else. If Auerbach believed in mantras, this might be his.

His work consists mainly of two groups: ‘landscapes’: urban scenes of Primrose Hill and Mornington Crescent near his studio, places that he returns to again and again, and portraits of a few people to whom he is close and who have sat for him regularly over many years – wives, lovers, his son, and a few trusted art world friends. His working method is slow, gruelling and obsessive. He scrapes back the surface of a painting hundreds of times in order to begin afresh and achieve something united and, above all, truthful. One of his most consistent models was Stella West (1916-2014), whom he met when he was 17 (she was 15 years older) whilst involved in a production of Peter Ustinov’s House of Regrets. He became her lodger and she became his lover and muse.

He painted her again and again and in 1959 said: ‘with someone, one knows one’s got to destroy the momentary things. At the end comes a certain improvisation. I get the courage to do the improvisation only at the end…..in painting, one destroys everything. In life, one can’t…. It’s a sort of rage… I always finish a picture in anger….One never has power over anything, can never do anything clearly or purely… that’s why one paints the things one loves because one is aware of all the relevances maybe, it’s the only way to get power over the things one loves…..’

His painting of E.O. W. II, 1964 – as Stella was always referred to – encompasses this complex gamut of emotions and aspirations. The palette is primarily blue, black and white, with flashes of ochre and a sliver of red delineating her sad, downturned mouth. It is not a ‘likeness’. You would not have recognised Stella from the portrait if you had bumped into her in the street. It is, rather, a presence. Something essential. A clue to what it must be like to be Stella, to feel like Stella posing for this man she loves, who labours away hour after hour, often on his knees, on the canvas between you. The more time one gives to the portrait, the more the piercing sad blue eyes draw in the viewer’s gaze and the more tension one feels in the work. It is as if this person has finally found her way out of a deep thicket or wood and is emerging, tired, damaged and a little distressed into the light. The smears, the black holes and crevices, the accretions of paint, the swirls and truncations of line all hint at the ‘face’ behind the ‘face’, something akin to an authentic self. Stella once said that when posing for Auerbach: ‘Nothing stood in his way.’

Much has been made of Auerbach’s thick paint. But it is not a style nor a mannerism – he has at times wrongly been called an expressionist – instead, it is a process of mapping, like that of a cartographer exploring uncertain terrains. The marks, brush strokes and docked lines are a way and means of seeing. If he resembles any other painter, it is undoubtedly Giacometti, whose marks pose a series of existential questions. Like Sam Beckett, Auerbach understands that ‘there is nothing to express… together with the obligation to express.’ For him, painting is a Sisyphean enterprise. He knows he will ‘fail again’ but hopefully ‘fail better’. He has said, ‘I never visualise a picture before I start…I have an impulse and I try to find a form for that impulse.’ This painting of Stella is, in turn, intimate, angry, perceptive and tender. A courageous, bravura ‘portrait’ always on the right side of collapse. Their turbulent relationship lasted for around fifteen years and caused a hiatus in his marriage to his wife Julia and his relationship with his son Jake. Fresh, visceral and passionate, the work is an intense observation plumbed from the depths of the artist’s being, from that sanguine place the poet W.B. Yeats called ‘the foul rag and bone shop of the heart.’

Sue Hubbard is an award-winning poet, novelist and independent art critic.www.suehubbard.com Her novel Rainsongs is published by Duckworth, Overlook Press US, Mercure de France and Yilin Press, China. “Hubbard deserves a place in the literary pantheon near Colm Toibin, Anne Enright and Sebastian Barry”. American Library Association Swimming to Albania, her fourth, fourth poetry collection can be ordered from: www.salmonpoetry.com Her fourth novel is due from Pushkin Press and Mercure de France in 2023.