During Frieze Week 2018, overshadowing hundreds of art events throughout the city, a history-making incident occurred when Banksy’s iconic painting “Girl With Balloon” was auto-shredded by its own picture frame just minutes after the hammer came down at £1.04m, at Sotheby’s Bond Street. The artist had built a shredding machine into the frame ‘in case the work was ever put up for auction’. Experts say the artwork could now reach a record £2m in value!

Meanwhile, in Mayfair, Thaddeus Ropac remained open for 24 hours, housing Tom Sachs’s live performance to issue visitors with a personalised Swiss passport representing “the ultimate status nationality, wealth, neutrality and freedom”. During the long waiting time at the “Swiss passport office” wine was served and in other parts of the gallery, visitors walked through Georg Baselitz “Focus on the 1980s” exhibition to celebrate his 80th birthday. His large-scale paintings, perfectly maintaining the artist’s maverick reputation, once scandalised the art world by turning them upside down, changing the public’s viewing habits and sharpening their perceptions.

On the other side of the river, Tate Modern launched Cuban artist and activist Tania Bruguera at the Turbine Hall, in response to the crisis in migration, Unit Gallery put emphasis on “21st Century Women” with a new group exhibition of British female artists and Blain Southern showed Sean Scully’s giant abstract paintings “Uninsideout”. 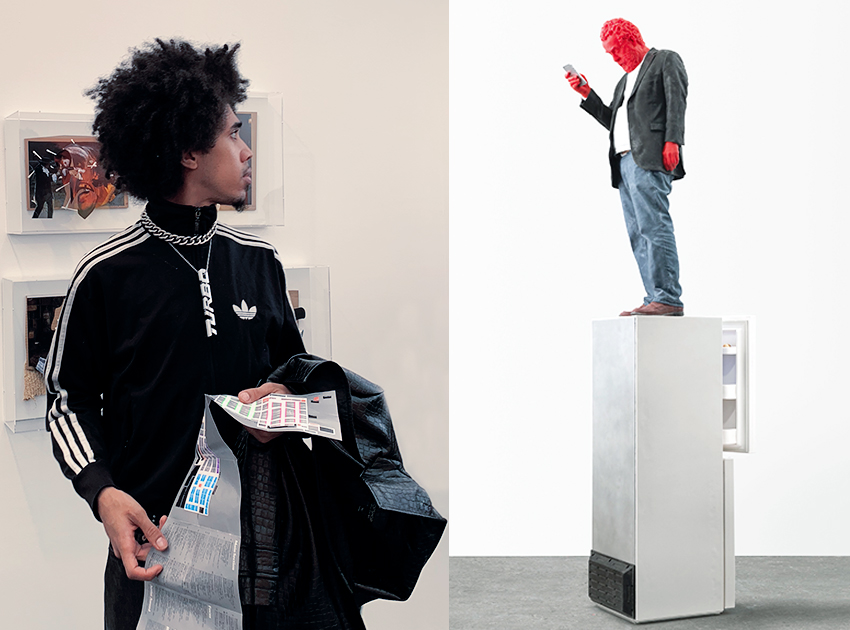 Although the preview day is generally reserved for collectors, professionals and the press, even during the early part of the afternoon it was impossible to walk through the fair as it was already so overcrowded. We are normally used to that each season there are some eccentric people who dress up to match the artworks, however, this year there was an overwhelming transition, a wave of Instagram slaves, almost as artworks were just there to be decorative backgrounds for their images, looking at the self-admired crowed rather than the other way round.

During the VIP opening at one of the galleries, I was almost hit by a Russian bodyguard of a no-name, swollen-lipped creature as my camera went apparently to close to her while I was trying to get a shot of a painting. It is time that visitors adopt a different attitude when it comes to their beloved openings where in fact everybody is a VIP.

This year Frieze Art Fair and Frieze Masters featured more than 160 galleries and over 1000 international leading artists, but somehow it was more like a show-stopping arrangement rather than carrying any revelatory new messages. It seems that these days the short-term goal is to encourage flashy and often impractical installations. 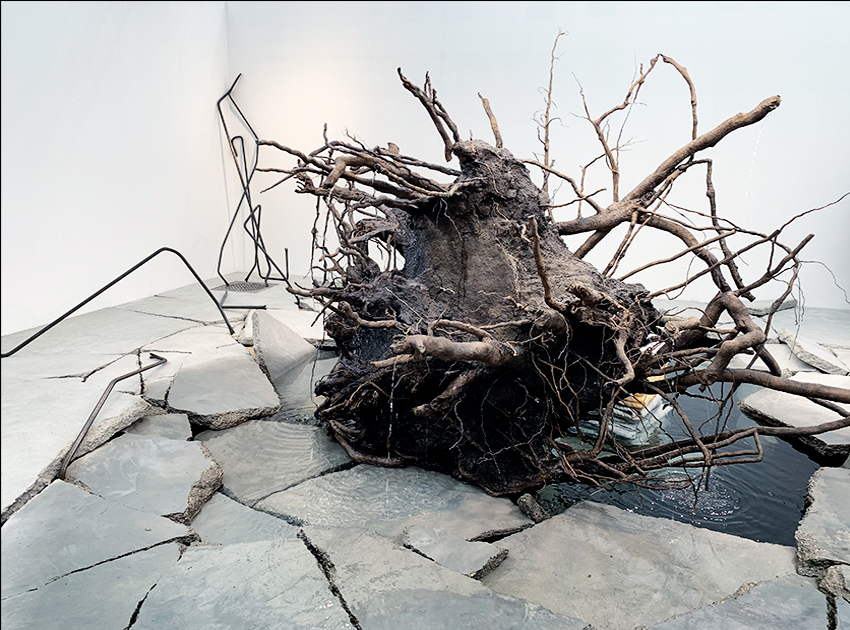 Kamel Mennour from Paris presented the delicate work of Tatiana Trouvé in their Brook Street gallery “Navigation Map London 2018” and a hugely ambitious installation by the same artist at Frieze, which for a second reminded me of Maurizio Cattelan’s “Pope Gets Hit By A Meteor” installation. Here, a giant upturned tree landed like an asteroid in the middle of the marquee’s entrance raising some eyebrows and many questions.

It’s rather curious, as the artist is more known for her delicate sensibilities and elegant settings of sculptures and interior décor. Her current work is a feat of fabrication with a patinated bronze tree emitting streams of water from its roots to create a pool within the cracked concrete floor, all at €650,000. 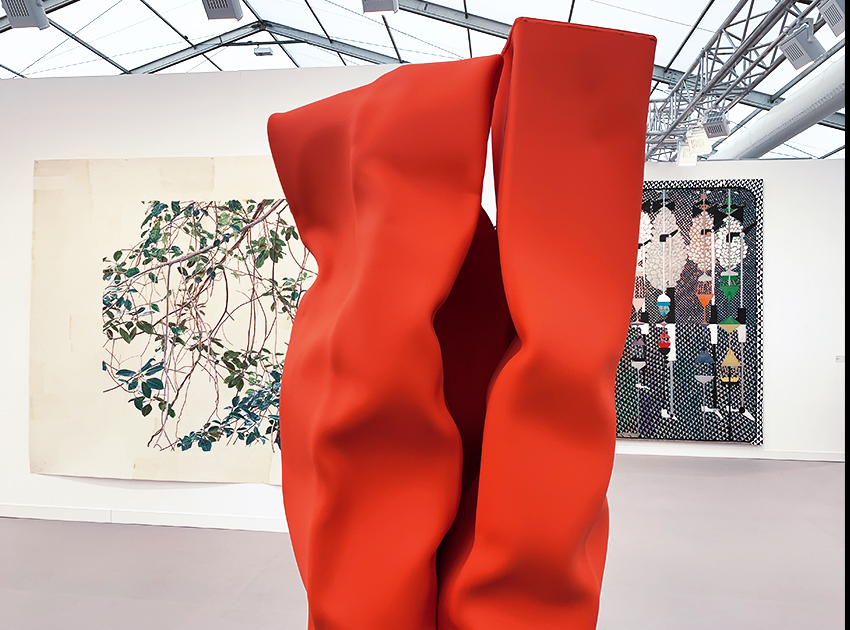 The gallery presented Carol Bove’s striking, bright coloured stainless steel sculpture with urethane paint.
Bove, born in Geneva to American parents, is known for her assemblages that combine found and made elements from materials as diverse as tubular steel, petrified wood and detritus scavenged near her studio in Brooklyn’s industrial Red Hook, where the Berkeley, California native has resided since 2000.
Incorporating a wide range of domestic, industrial, and natural objects, her sculptures, paintings, and prints reveal the poetry of their materials. Bove’s large-scale sculptures are often exhibited outdoors and in public spaces and the artist is represented by David Zwirner since 2011. 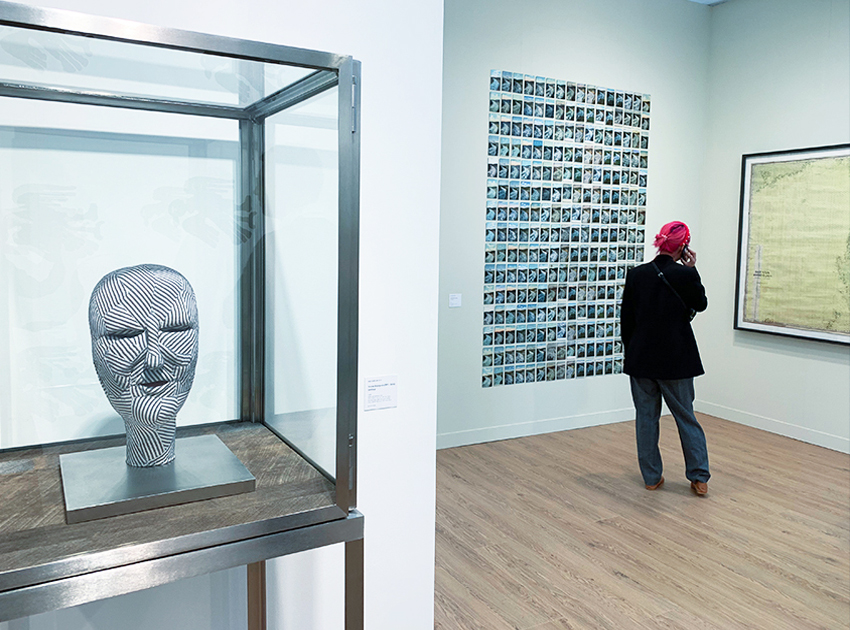 Hauser & Wirth presented a much more conventional booth unlike last year when Mary Beard transformed the space into an imaginary regional museum, or in 2014 when the artist Mark Wallinger recreated Sigmund Freud’s study.

This year, the gallery decided to do something different, called the installation “Works I’d like to live with” to tone the presentation down to the reason for an art fair to buy something one would like to live with, avoiding any theatrical lighting or vintage furniture, using just pristine white walls to show works by Mark Bradford, Günther Förg and Matthew Day Jackson. 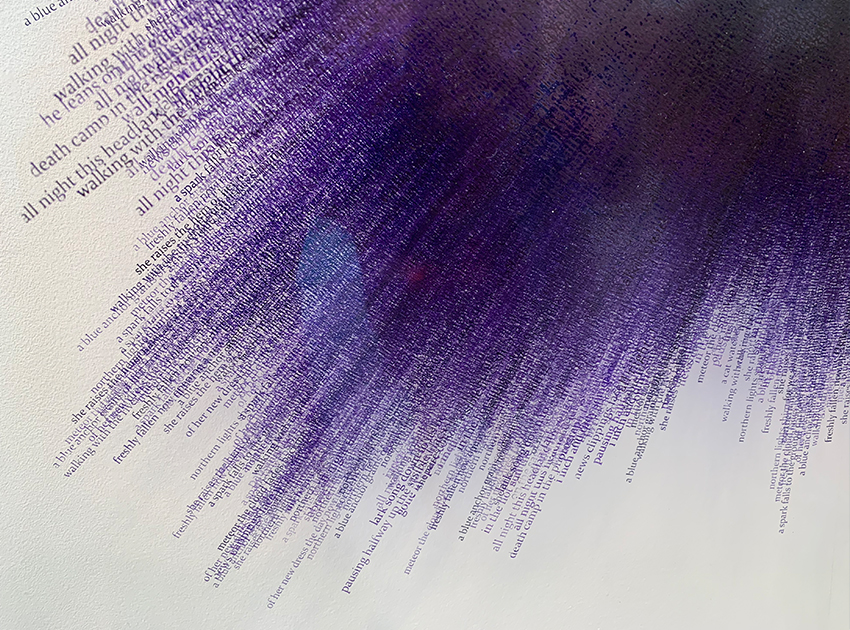 At the centre point of the gallery, three glass sheets stamped with blue, black and purple oil-based ink by London based contemporary artist, Idris Khan OBE, titled “The Existence of Beauty”, “Falling into the depth of the ground” and “Nothing to believe – Nothing to doubt” (photo).

Khan’s work draws through a variety of media that includes photography, video, and sculpture, through an intricate process of layering multiple images. A diverse range of cultural sources including literature, history, art, music and religion to create densely layered imagery that is both abstract and figurative and addresses narratives of history, cumulative experience and the metaphysical collapse of time into single moments.

Khan’s interest in Islam and layered imagery can be traced back to his upbringing. His work and process have been described as “experiments in compressed memories” and “all-encompassing composites or as Khan describes it: “It is a challenge to not define my work as a photograph but using the medium of photography to create something that exists on the surface of the paper and not to be transported back to an isolated moment in time”. 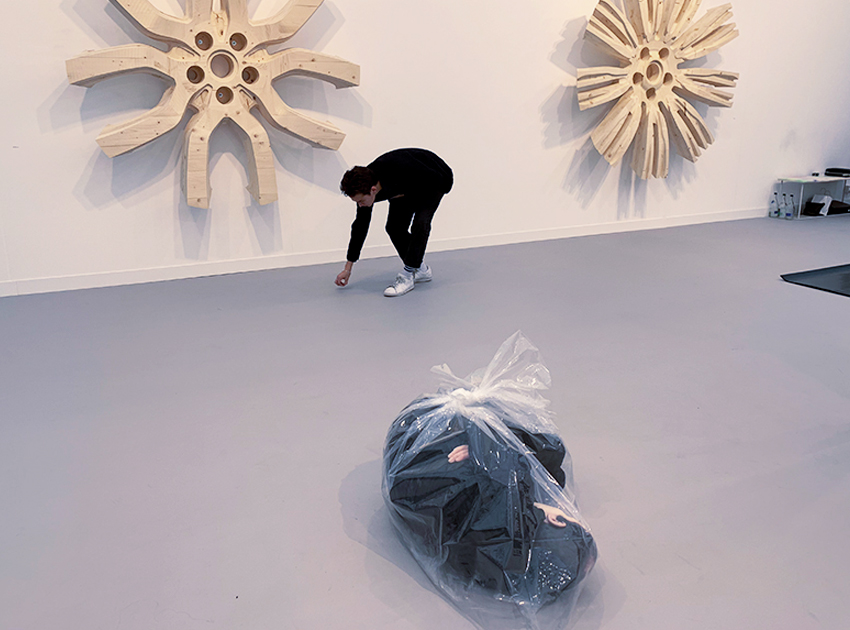 That could have been me. A dead, suffocating journalist, although I am not unemployed. Stuart Shave gallery presented a much-criticised work by Josh Klein, a 3-D print laid-off, life-size professional in clear vinyl that addresses the effects of the mortgage crises and recession on people. Uncomfortable subject for uncomfortable times.

Kline builds a hypothetical, disturbing future scenario of the political and social transformations of our age, presenting a critical look at the impact of technology and the “new economy” on the lives of individuals in the 21st-century. There is something altogether mortuary about the scene, which the artist describes as a period piece set in the near future, around 2030, more than two decades after the 2008 financial crisis. The US society is taken as a negative paradigm of processes which are affecting all advanced countries, and which take the form of a growing threat to the privacy of individuals, their freedom of expression, and their economic status. 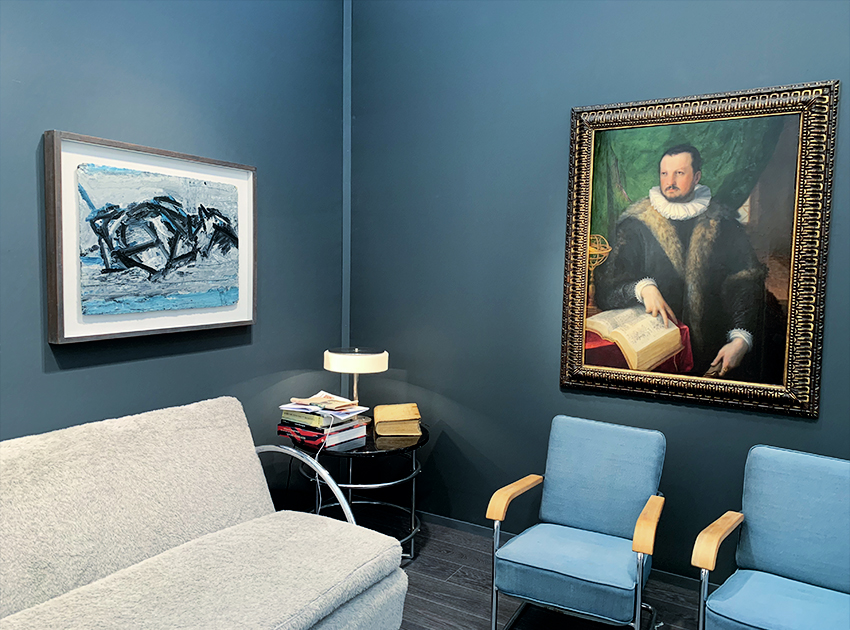 It is not unusual that a gallery is showing at both Frieze and Frieze Masters. Hauser & Wirth joined forces with Moretti Fine Art to create “The worlds of Stephen Spender”, a unique conversation between contemporary art and 14th-16th-century artists, inspired by the poet, writer and intellectual Sir Stephen Spender. The project explores both Spender’s progressive ideas and his artistic friendships based on important works by artists he personally knew and collected, including Michael Andrews, Frank Auerbach, Lucian Freud, Henry Moore, Serge Poliakoff.

The two galleries have collaborated to reveal the essence of the great writer with an ideal exhibition spanning six centuries, from 14th-century Italian panel paintings to works by the most eminent 20th-century masters. The installation also includes an important still life by Giorgio Morandi and a splendid monochrome piece by Piero Manzoni, “Achrome”.
The Spender family have generously loaned works from Spender’s own collection to give valuable context to the presentation and the granddaughters of both Stephen Spender and Arshile Gorky, have collaborated closely on the project. 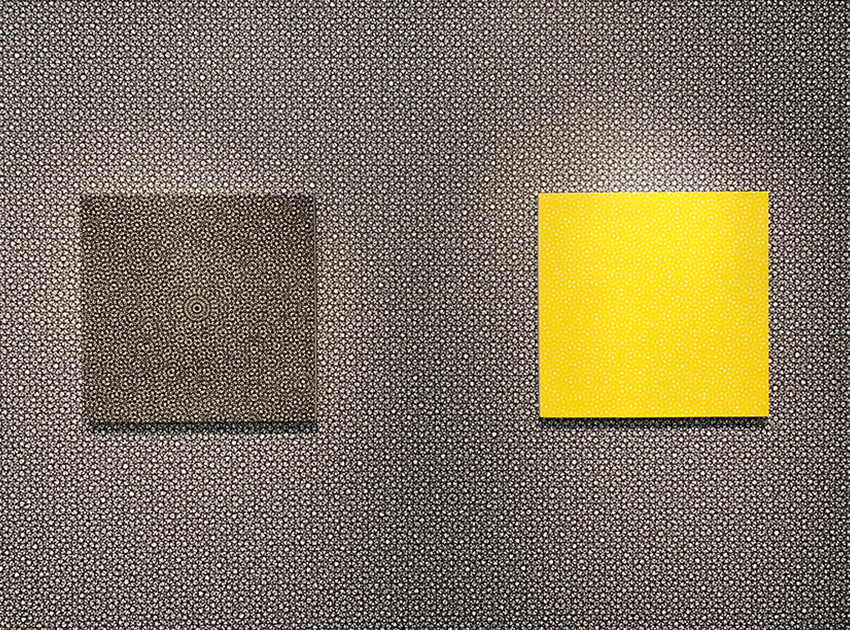 For Frieze Masters, Lévy Gorvy collaborated with the Parisian gallery Kamel Mennour to exhibit the work by French artist François Morellet, a precursor of conceptual art and a major figure of post-war geometrical abstraction. The exhibition is curated by Béatrice Gross bringing two-dozen historical works together from 1954 to the 1970s. system-based work and the design installation was based on a grid measuring 80 cm, the dimension favoured by Morellet for the majority of his paintings. These masterpieces clearly show the extraordinary versatility of Morellet’s system-based work.
A homage to the self-declared “freak child of Mondrian and Picabia” as the artist described himself in an autobiographical text from 1987, the scenography presents Morellet’s work in accordance with his meticulous logic of order and harmony, underpinned by a dynamic of controlled chaos that pays tribute to the artist’s Dada spirit. 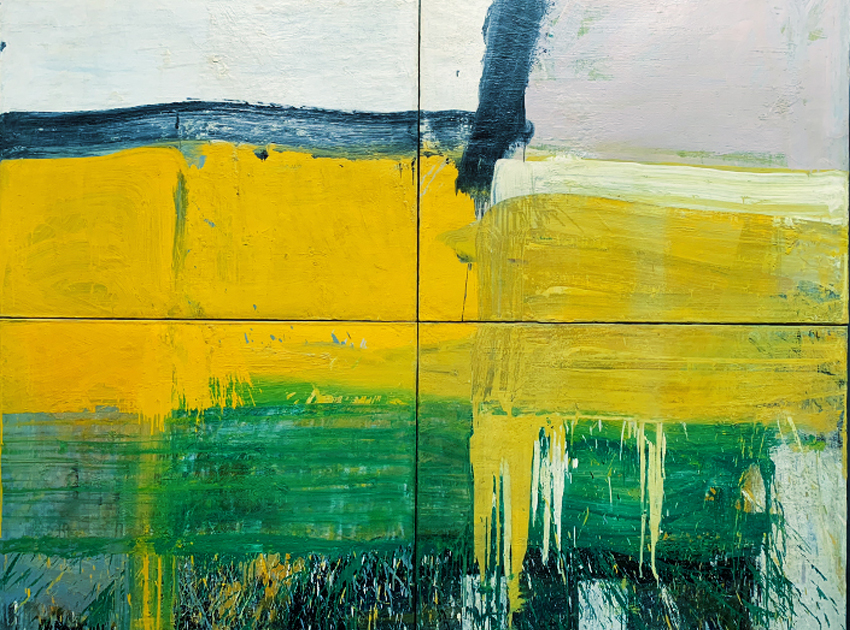 Alfred Leslie has been on the frontlines of major post-war American art movements. Early in his career, he was with the Abstract Expressionists in New York, producing immense, lush abstractions then experimented radically, making silkscreen boxes years before Andy Warhol’s emergence. Leslie was also at the forefront of experimental filmmaking, collaborating with Robert Frank to make “Pull My Daisy” in 1959, a tribute to the Beat generation featuring Richard Bellamy and Allen Ginsberg.

During Frieze Masters the gallery presented Leslie’s spectacular painting “Ornette Coleman” in 4 parts for a price of $600.000, also a large-scale sewn dyed canvas and wood, in two parts “Nordsockel-Südsockel” by Franz Erhard Walther, a polyvinyl latex piece “F.A.X.” by Michael Heizer and “Untitled” by Tadaaki Kuwayama. 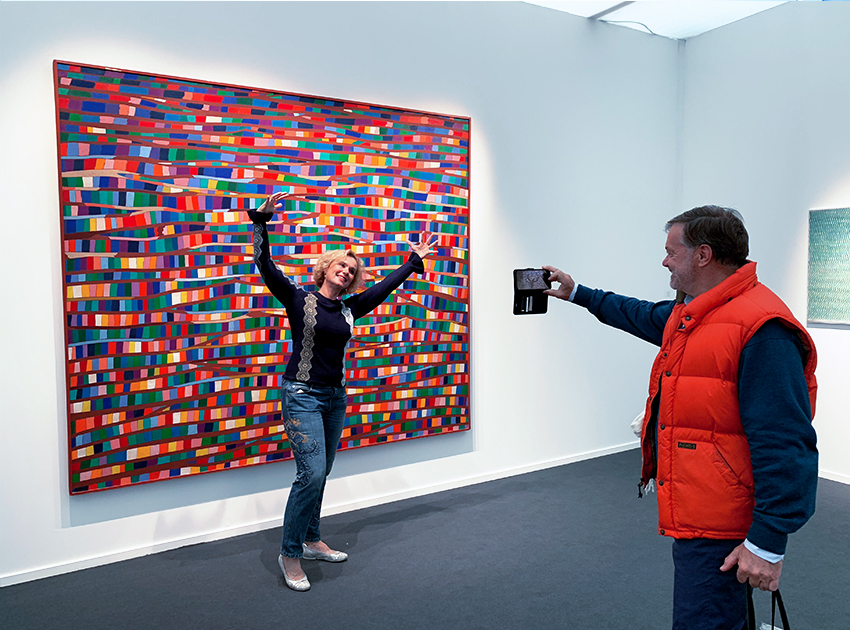 Piero Dorazio brought abstraction to Italy and known for his gestural, atmospheric paintings of grids crosshatched with fluid brushstrokes and pulsating in colour and texture. Born in Rome, Dorazio studied formally in classical painting and drawing, followed by architecture. He was influenced by the Russian Suprematism, Constructivism, Surrealist biomorphism, and most notably by Italian Futurism.
In 1953, he travelled to New York, where he met the painters Mark Rothko, Robert Motherwell and Franz Kline. As Dorazio’s work progressed, he continued his linear, crisscrossed paintings using designs that varied in density and complexity but were consistently concerned with luminosity. 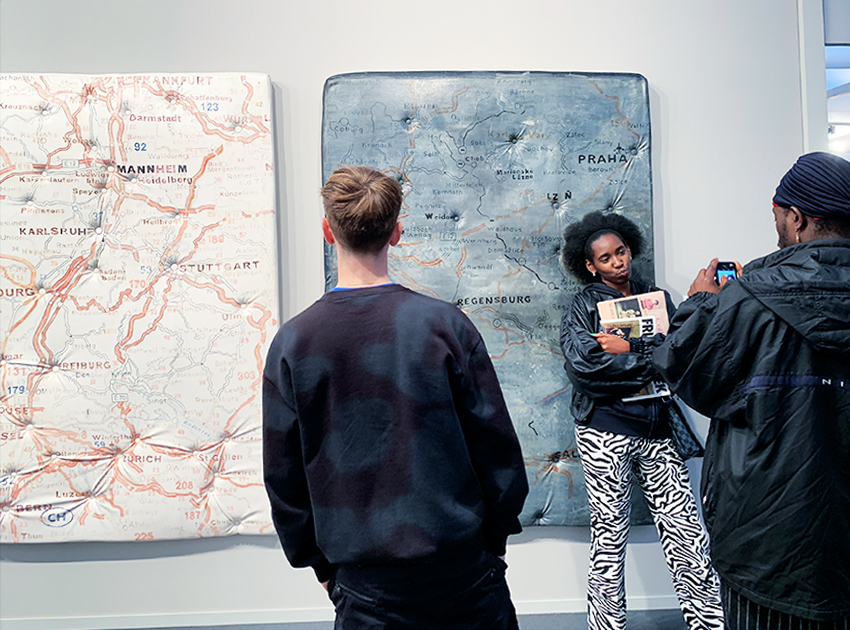 Sperone Westwater gallery hanged on the wall a triptych acrylic paints on mattresses by Guillermo Kuitca. Born in 1961 in Buenos Aires, Kuitca is one of Latin America’s leading contemporary artists. Inspired by the worlds of architecture, theatre and cartography, his work has transcended geographical boundaries and has been exhibited extensively around the world.
In 1989 Kuitca began to receive significant international attention when he represented Argentina in the 18th São Paulo Biennial. His installation of painted maps-on-mattresses at Documenta IX was a breakthrough in the international art world.

The mattresses are punctuated by irregularly placed buttons, serving as markers for major cities and painted road maps of Europe and although the names of the places can be easily read, Kuitca was not much interested in the specific locations the maps represent. In fact, Kuitca likes to paint on mattresses because of what happens on them … “Dreams, Sex, Death and Life”. 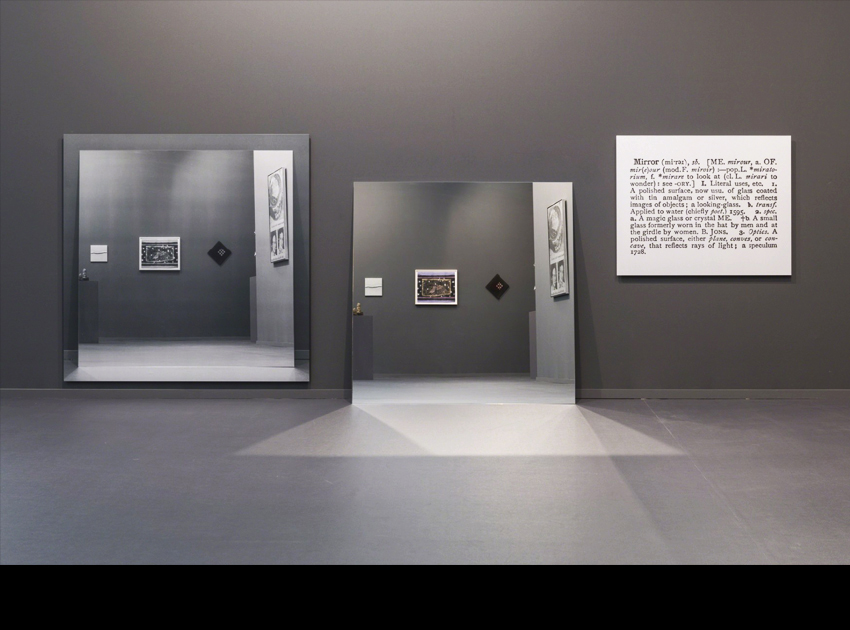 Entering the space of Castelli Gallery from New York was pure heaven. The gallery was opened back in 1957 by Leo Castelli who had an unparalleled eye for quality in contemporary art of his time. In the past 16 years, the gallery has been directed by his wife, Barbara Bertozzi Castelli and maintains a commitment to post-war American art. Castelli gave Jasper Johns his first exhibition and less than 10 years, the gallery became the international epicentre of Pop, Minimal and Conceptual Art, showing Robert Rauschenberg, Cy Twombly, Roy Lichtenstein, Andy Warhol, Donald Judd and Joseph Kosuth, amongst many other artists.

This year, at Frieze Masters the gallery presented a striking and breathtakingly beautiful experimental installation by Joseph Kosuth ”One and Three Mirrors” created in 1965, a photograph of a mirror image of the interior, a mirror, and photographic enlargement of the dictionary definition of the word “mirror”. His practice is highly self-referential, drawing influence from Sigmund Freud, Duchamp and Ludwig Wittgenstein’s seminal theories. 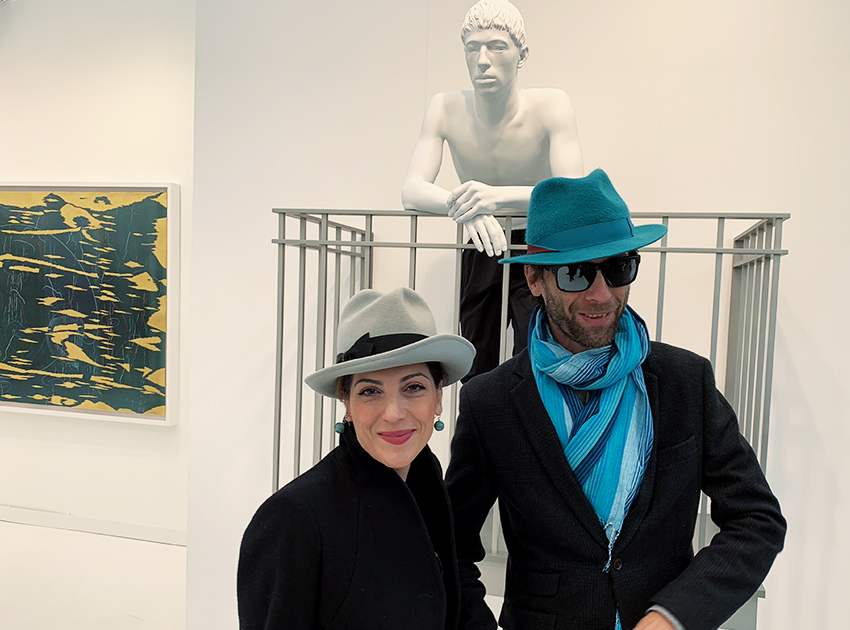 THE BEST LOOK OF FRIEZE

There is no art fair without fun and a bit of show-off and we all love that. During my Frieze visit, I could not help noticing and later engaging an Italian couple into a conversation. They were art lovers with no cameras, no selfies, just Borsalino. Bravo!

TOP PHOTO (left) “I Believe In You” by Jeppe Hein at 303 Gallery, (right) neon installations by David Shrigley at Stephen Friedman gallery / Photo-montage © Courtesy of ZOLTAN+