After a lengthy refurbishment, thanks to £10 million from The Lottery Fund, one of my favourite museums in the UK, has re-opened, and they have done a magnificent job. It is the most significant development in the history of Gainsborough’s House since it became a museum in 1961. Thomas Gainsborough, one of the greatest painters of the 18th century, deserves every bit of extra wall space.

The birthplace of Gainsborough in the town of Sudbury in Suffolk houses the world’s largest collection of the painter’s works in its permanent collection, which encompasses his entire career, from early portraits and landscapes painted in Suffolk in the 1750s to later works from Bath and London from the 1760s, 70s and 80s. 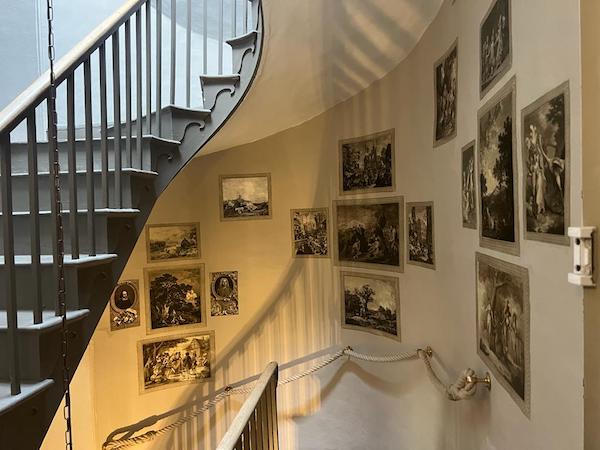 The redevelopment comprises a new three-storey building, with four new galleries as well as extensive educational facilities. This stunning redesign by the acclaimed architectural firm ZMMA really opens up the museum and lets you experience the birthplace in a new way – with room to breathe. First, the new Gainsborough Gallery (just after the entrance to the new building) has portraits and landscapes from the collection of the House as well as private loans and works from the Tate and the National Gallery. This is an excellent introduction to Gainsborough’s work in a spacious gallery before you enter the main (historic) house. Aesthetically it is just lovely, featuring walls lined with Sudbury silk damask, invoking the unique history of Sudbury as one of the UK’s biggest exporters of silk goods. There is an exhibition on the history of Sudbury’s silk industry on show here too.

My absolutely favourite change to the museum is that now, in each room is a map of the works with information (presumably online too). This means no ugly labels on the silk walls (or anywhere else), getting in the way of the overall look of the rooms and no one leaning across you to read every single word on the label too. Other museums, take note!

In the same building as the new Gainsborough Gallery is the first temporary exhibition in the newly built museum: ‘Painting Flanders: Flemish Art 1880-1914’, which tells the story of Flemish painters from the end of the 19th century. 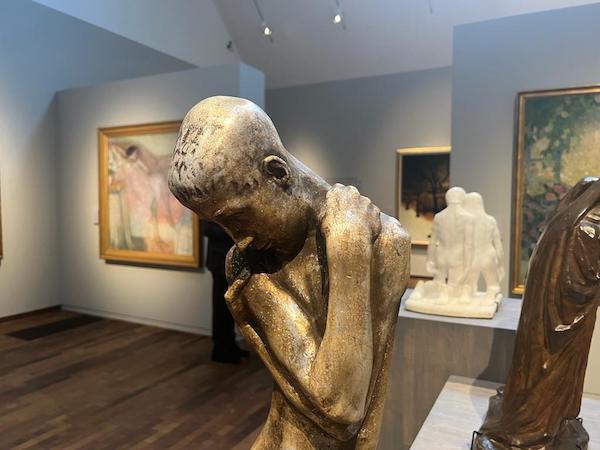 The second new gallery is just as spacious, and this is a fairly extensive show of a really surprising collection of some of the most radical Flemish artists at the time (great to see some George Minne sculptures in there, a major influence on Gustav Klimt and Egon Schiele), and is organised by the Phoebus Foundation. The show examines a growing nostalgia during the Industrial Revolution for a pastoral age, a preoccupation of Gainsborough and John Constable.

From the new space, you cross the courtyard, with a typical Suffolk crinkle-crankle wall and a much-needed café, over to the main historic house, which (thankfully in my opinion) hasn’t been changed too much except for taking it back to its Suffolk colour scheme and a couple of content changes.

The house itself dates to around 1520. Gainsborough’s parents, John, and Mary, probably moved here in 1722, five years before Thomas was born, who himself lived here, on and off, until his twenties.

It includes his painting room, a recreation of an 18th-century studio and a print workshop complete with a printing press and many of his tools of the trade. In addition, there’s an exploration of his early life, with family portraits and landscapes in an 18th-century living room.

Upstairs there is a music room as well as a room dedicated to John Constable, who was also a Suffolk boy – in fact, if you are doing the Gainsborough house as a day trip, I thoroughly recommend a half-hour drive to the charming village of Flatford where he painted ‘The Haywain’ (the view still looks exactly the same!).

On the second floor of the main house is another temporary show in conjunction with The National Portrait Gallery, which is both interesting and informative, on Ignatius Sancho (c1729-1780), a formerly enslaved person who Gainsborough painted. The original painting of him is in Ottawa, Canada, but they have a rare miniature. The room takes you through Sancho’s journey from slavery to becoming a writer, composer, shopkeeper and abolitionist, celebrated in the late 18th century as a man of letters, a social reformer, and an acute observer of English life.

The expanded museum is really a fine addition to the Suffolk Museum scene and a representation of the continuing fascination with the story of Gainsborough’s meteoric rise from the son of a merchant to high society portraitist and landscape painter and founding member of the Royal Academy.

If you haven’t been already then, you should make a day of it, as there are some wonderful walks in the nearby countryside (unfortunately the setting for Mr and Mrs Andrews is on private land), as well as some great pubs around ‘Constable country’ not far away. And if you have been before, then a revisit should be planned as they’ve managed to turn a good solid museum into a world-class one.