Gallery Weekend Berlin has been rapidly evolving, over the past fourteen years, morphing into a leading international event to be reckoned with. It has become a seminal destination to socialise and buy works of art from established and emerging galleries. The event encourages artists, gallerists and collectors to meet and acquire art in a relaxed and informal, yet buzzy environment.

Berlin has been a well-known hotbed for emerging artists

Every April, Galleries gather together through the citywide Berlin art dealers association which supports an ever-increasing network of galleries showcasing the best international and local art on the planet. In fact, for years Berlin has been a well-known hotbed for emerging artists attracted to low studio costs and sophisticated European culture of cafes and clubs.

This year’s event featured around 50 participating galleries and a whole array of pop-ups that you needed to follow social media carefully to find. The most spectacular event was NGORO NGORO II a group show held in the studio complex of Jonas Burgert one of Blain|Southern’s stable of Artists. 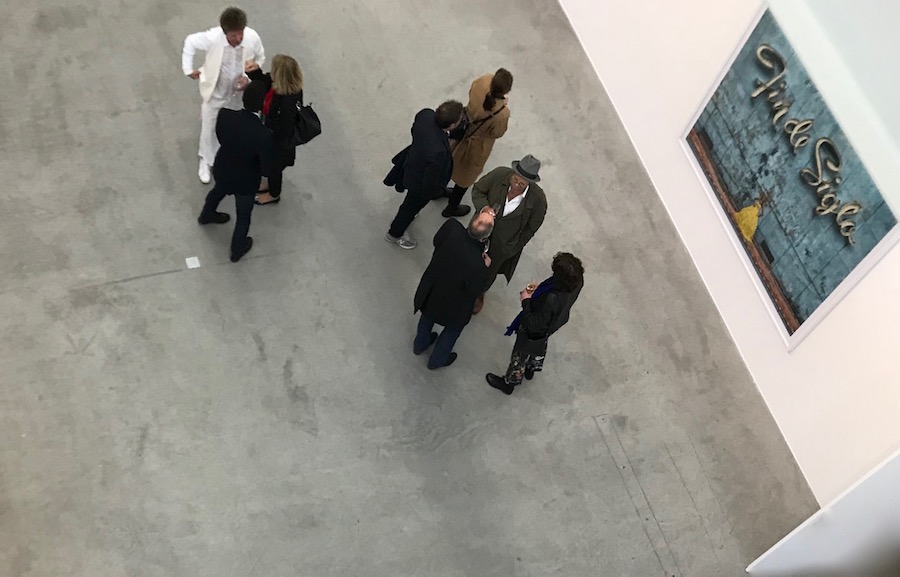 Blain|Southern presented an oversized series of photos by East German artist Frank Thiel. Each shows a young girl celebrating the Cuban Quinceañeras, which takes place as a rite of passage on their 15th birthday. Instead of photographing the young women in front of a beauty spot, as in tradition, the models are shot using their local neighbourhoods as the background, lending a far more realistic contrast to the finished work. 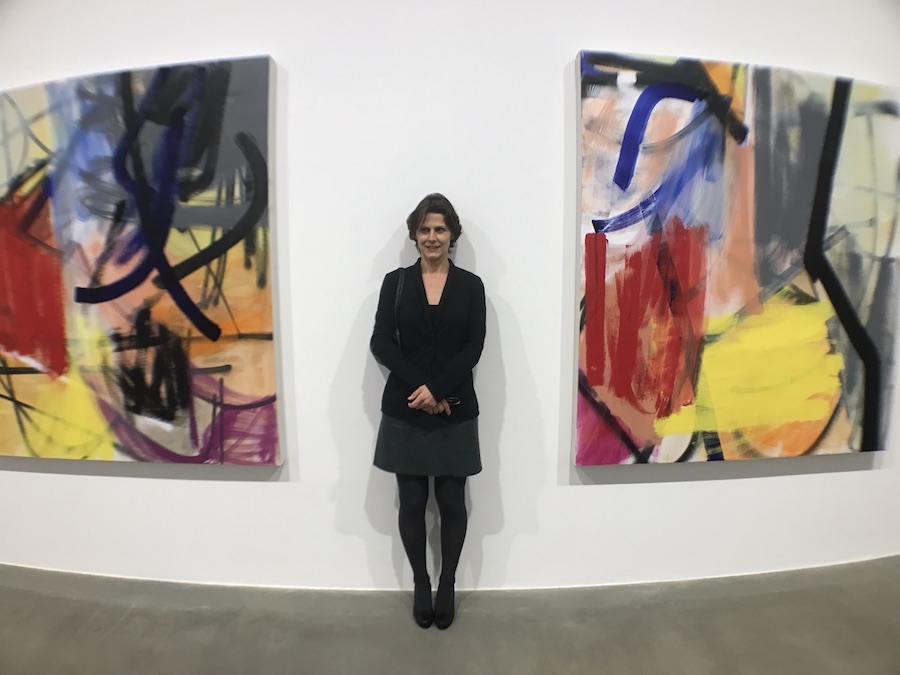 Liliane Tomasko is also exhibiting at Blain|Southern. Her brightly coloured, edgy abstractions are some of the best of her generation. Tomasko has created abstract painting, sculpture and photography that examines places of domesticity. She has fashioned a unique and recognisable abstract language. The Swiss-born painter has studios in both New York and Berlin. 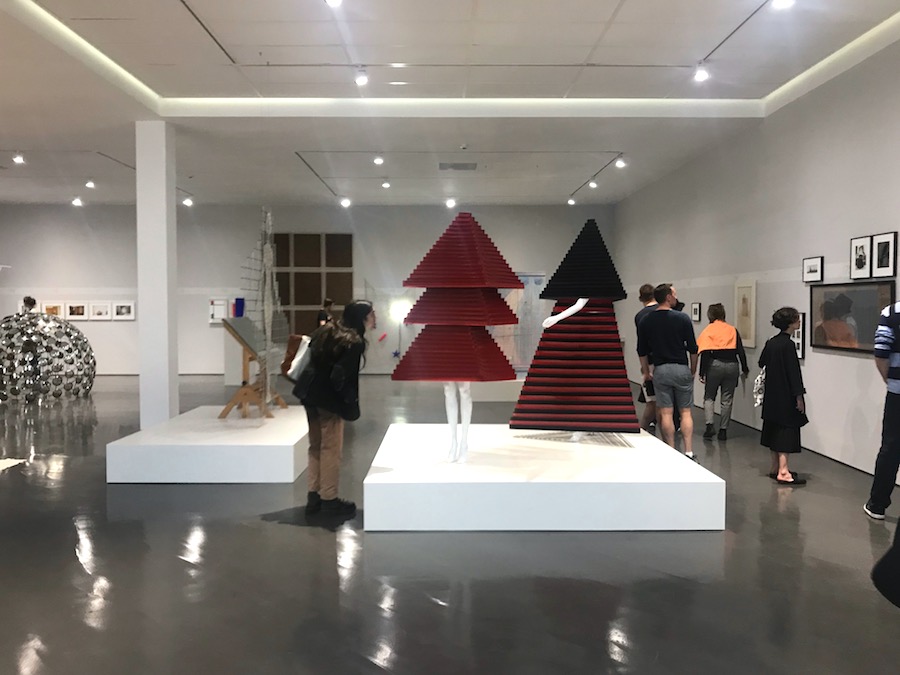 Esther Schipper is presenting ‘Catch me if you can!’ AA Bronson + General Idea, 1968–2018, until 26 May, This is a survey celebrating the 50th anniversary of the founding of General Idea, a collective made up of artists AA Bronson, Felix Partz and Jorge Zontal. The programme also includes a five-day installation of Bronson’s mystical performances at the KW Institute of Contemporary Art (until 29 April). 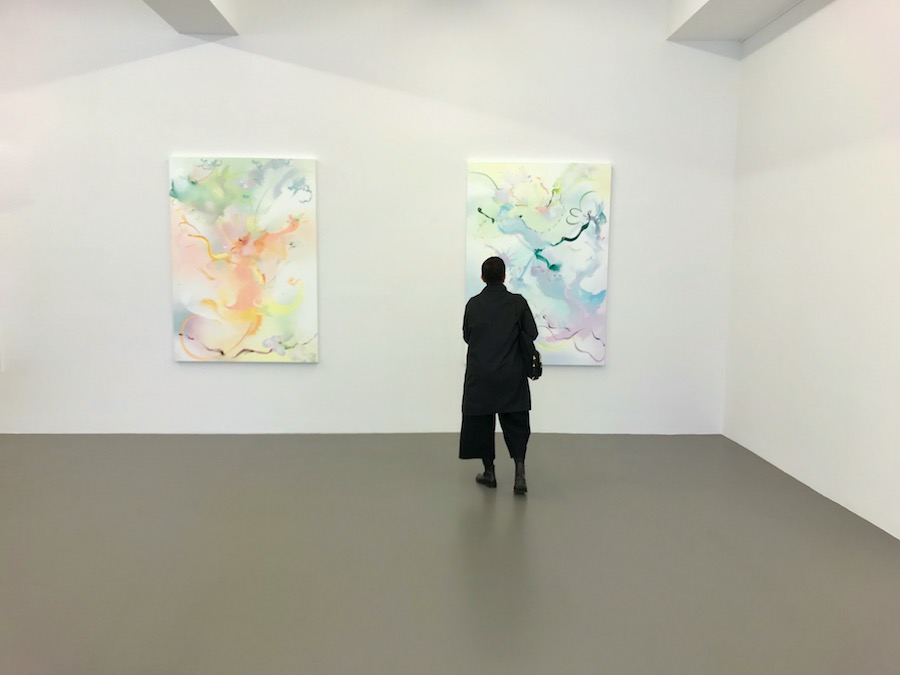 The Buchmann Galerie had a solo show of the British artist, Fiona Rae whose undulating compositions in pastel colours are inspired by clouds fluidly merging. Rae participated in Freeze, the group show curated by Damien Hirst in London’s Docklands in 1988, and Sensation at the Royal Academy of Arts in 1997. She was shortlisted for the Turner Prize at Tate in 1991. 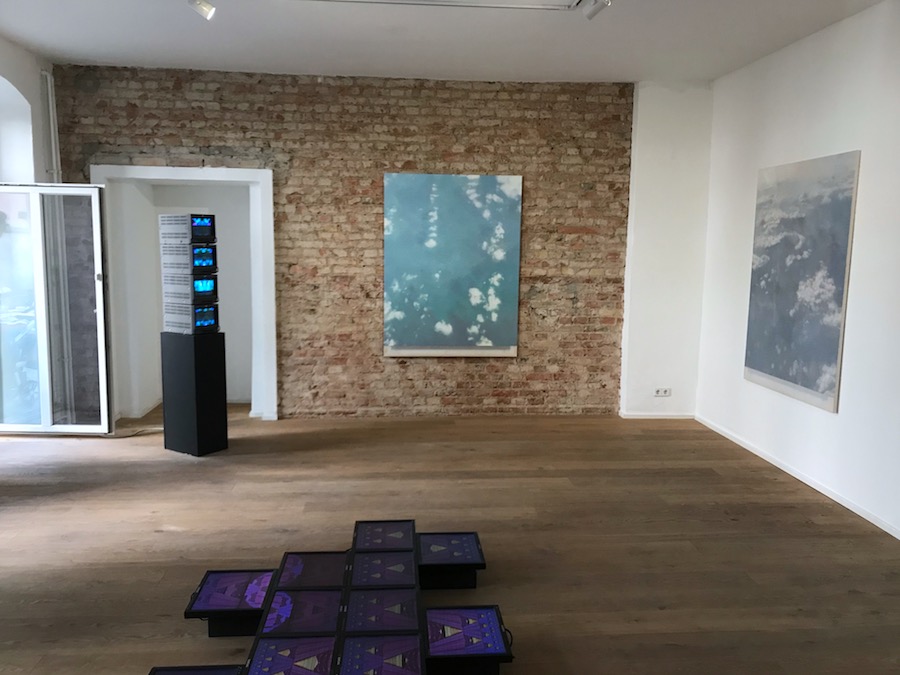 On the subject of clouds, London-based gallerist Kristin Hjellegjerde has opened a second space in Berlin launching with paintings by Martine Poppe who photographs clouds from both planes and on the ground then meticulously recreates them in paint from top left to bottom right requiring the artist to perform as a human printer painting on translucent polyester restoration fabric. They resemble window shades and have the ability to suck you into a void of infinite space.

The second artist showing in the gallery is James Alec Hardy a Londoner who presents rising totems of stacked video screens. The video frames are constantly changing and overlapping, oscillating like oversized antennas from a B sci-fi movie. The artist says,”Each of these cycles subsists between the tangible and intangible, fleeting and permanent: looking at you looking at them, reflected in the mirror”.

One of the most impressive works at Berlin Gallery week was found at KÖNIG GALERIE who presented, “When Dinosaurs Ruled the Earth’, Claudia Comte’s second exhibition at the gallery. Comte has conceived an immersive environment comprising spruce trees, new sculptures, and a multi-channel video installation for the nave of the space. In the main space, a large grid-formation features twenty spruce trees suspended from the ceiling – each tree revealing a carved reliquary in which wood, marble, and bronze sculptures are placed. 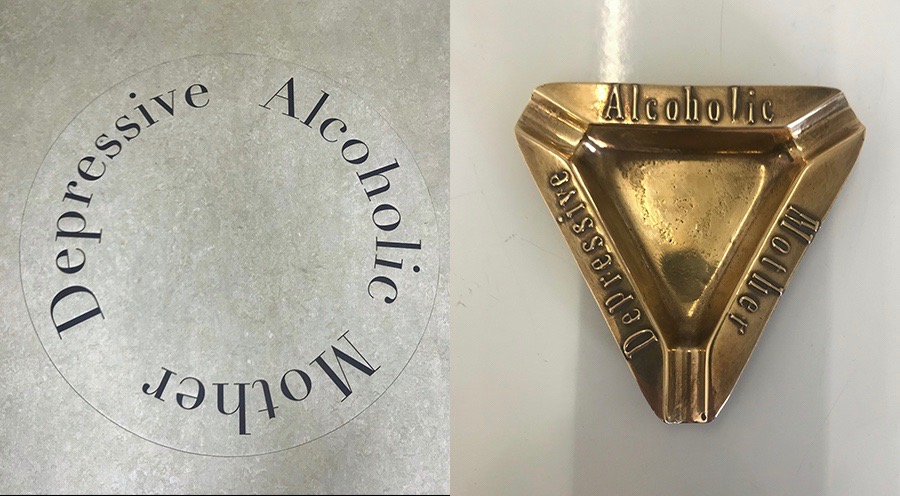 Next up, I was taken by Becky Beasley’s exhibition at Plan B ‘Depressive Alcoholic Mother’ is permeated by questions of position and reciprocity. The exhibition focuses closely on Beasley’s long-standing fascination with the protocol of the double and with panoramic cycles, articulating mechanisms of interior and exterior spaces that are central to her practice. From the ripples of these movements, a larger concentric circle structuring the show emerges as a choreography of doppelgangers. The exhibition weaves new proximities and distances between different parts of single works or iterations of works in editions of two. Works are unpaired and interspersed: neither one added to another, nor one divided into two, but additions of what they do not have in common and subtractions of familiarity, veering together and apart. 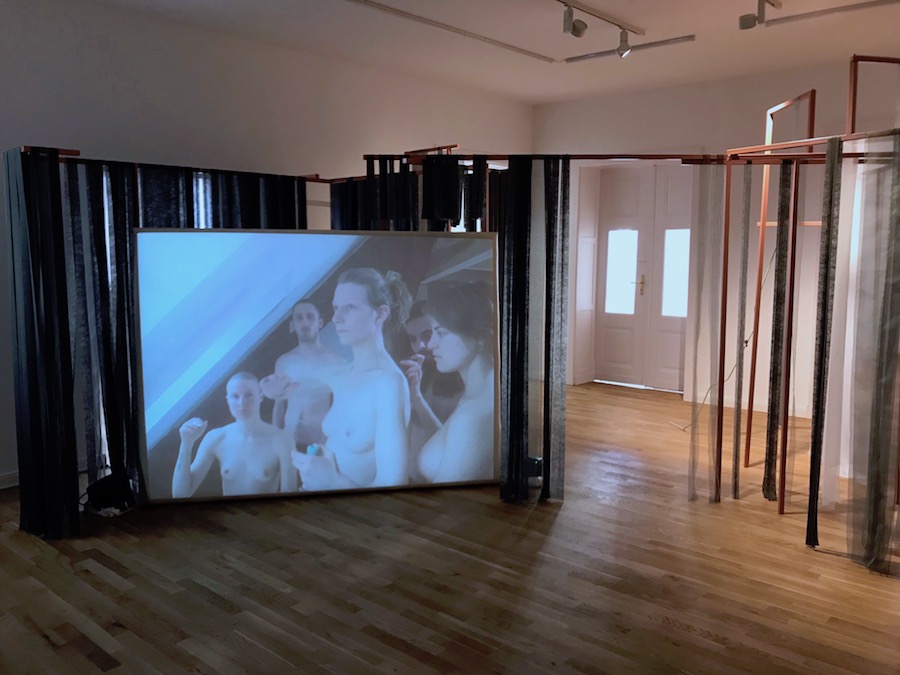 Montreal Artist Julie Favreau ‘Will Deliquesce’ The House of Egorn

Next The House of Egorn hosted the Montreal Artist Julie Favreau ‘Will Deliquesce’ is a newly commissioned 8-minute film and sculptural installation presented for the first time alongside new photographic work. Favreau was artist-in-residence at the Künstlerhaus Bethanien in 2017 from the Québec region – she has since settled in Berlin.

Julie Favreau’s practice is located at the crossroads of visual art and choreography, where research into gesture and movement feeds into the production of sculpture and vice versa. Composing scenes involving performers and objects in set environments, the artist produces intensely private, enigmatic worlds. Through a variety of media Favreau has developed a body of work that explores the sense of touch and plays with sensory stimulation to reflect on the transformative qualities of desire and eroticism, seeking to represent existence as unframed, in its liveliness and sheer materiality. 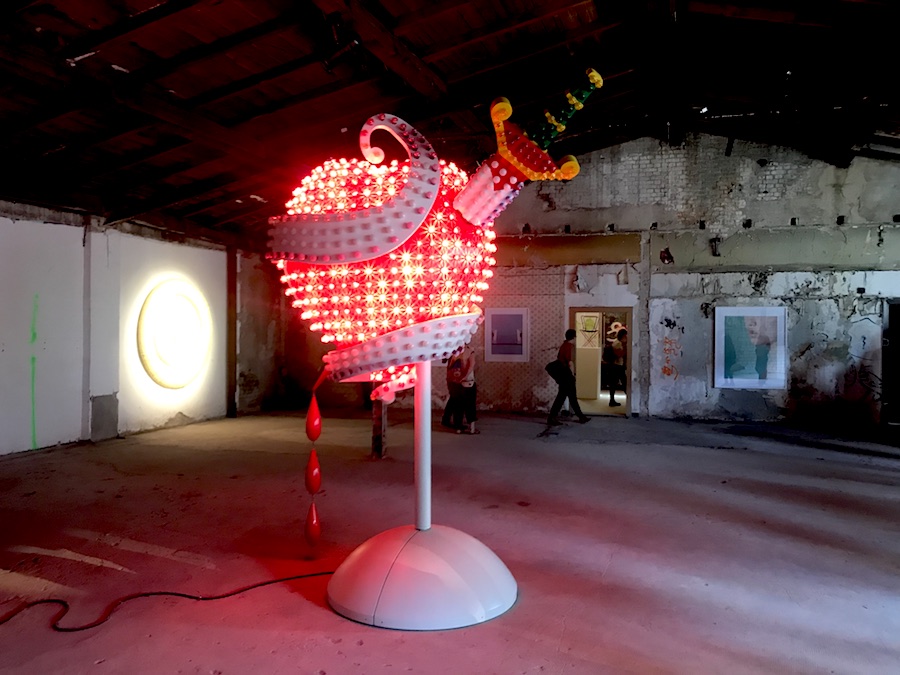 Finally back to NGORO NGORO II, this has been the highpoint of my trip to Berlin on two occasions. Maybe it’s just seeing the process of the derelict industrial buildings transformed into a community of working artist spaces. It is rough and ready pulling away from the mould and abandoning the traditional white cube. The quality of the art on show is mostly of the highest degree, and the festival vibe of the surrounds are unique. This is justification for the queues stretching around the block. It’s always reassuring to see dedicated support for this non-selling exhibition.