One Hundred years after the suffragette movement which culminated in women gaining the right to vote, it feels like this may finally be the year for Women and with International Women’s Day this week, let’s celebrate. So what about artists labelled GIRLS? – and even worse, Glasgow Girls?

It’s a catchy title, but The GLASGOW GIRLS were, in fact, a very loose-knit group:

The first Boys, Lavery, Guthrie, Hornell, Crawhall, Paterson, were so named around 1880; the second wave of young painters, The New Glasgow Boys, around 1985. The girls took longer. The first had to wait till 1968 when the wife & friends of Charles Rennie Mackintosh were so christened as an ironic reference to the 19th-century all-male group, but the label was used seriously, properly, in Jude Burkhauser’s seminal 1990 exhibition Glasgow Girls: Women in Art and Design 1880-1920.

The second wave of women painters were highlighted in 1985 in my Glasgow Herald piece on the GSA degree shows; I wrote: “Good work from Mary Maclean & Rosemary Beaton; political & feminist images from Helen Flockhart, Karen Strang & Alison Harper provide really strong meat.” On my recommendation they went on to show as “The Glasgow Girls’ at London’s Boundary Gallery, meriting a feature in the Independent.

So what about today? Thirty-three years on all the Glasgow Girls are professional full-time painters, and exhibit widely. Their former GSA tutor Sandy Moffat said back then that he was confident of their eventual success. “Even in this chauvinistic environment they are tough-minded enough to survive & prosper. Since 1984 all the outstanding painters from GSA have been female and their work really quite ferocious; none of this namby-pamby stuff.” The girls were, he concluded, maybe “too hot to handle”.

Current events prove he was right, with both Beaton & Strang presenting memorable shows with large-scale forceful works from a feminist perspective. 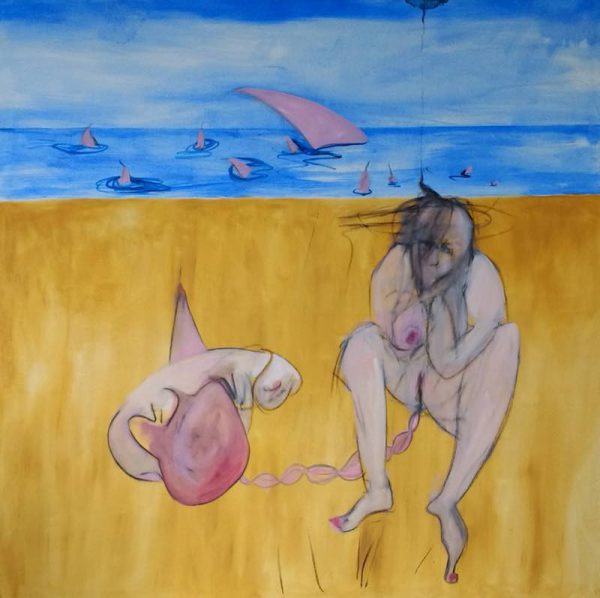 KAREN STRANG’s shocking, powerful and provocative exhibition at the Lillie Gallery, Milngavie Glasgow, is inspired by her extensive research into the savage Scottish witch-trials of the 16th & 17th century. Strang has long tackled challenging subjects, as I wrote in 1985, “beginning with her concerns with 3rd world starvation to pre-menstrual tension – serious messages couched in deceptively lively colour. ”

Nothing has changed. Her focus is still raw injustice, this time the institutionalised victimisation of women. More than 4000 women were brutally shackled, tortured, burnt or drowned – all under the aegis of a merciless church, fearful neighbours and pitiless state. Power and politics produce a scapegoat.

Strang depicts this terrible slaughter of ordinary, innocent women who suffered these atrocities in graphic paintings which have an unreined physicality but vivid colour. It is the representation of the unimaginable, – when anyone – Adie, Maggie, Lilias, Agnes, Bessie – could be accused regardless, and so employs dark memories described in deliberately crude gestural strokes.

Many of Strang’s large-scale expressionist oils ‘Jetsam’, ‘Shagreen’, ‘Ballast’, place the bodies on the shore of the Firth of Forth near her home. Here a cobalt sky and bright yellow sand provide the setting – as happened in-actual-fact – for macabre torment. Others depict the landscapes where these witch-hunts and crimes took place. Strang is a superb draughtsman and her smaller single figures: ‘Constrait’, ‘Deep’, ‘Blood & Bone’, especially ‘Vox Vulgus’, echo Francis Bacon, but as someone aptly said, “Not with dicks, nor tits but cunt.”

The show is accompanied by evocative, moving poems by Katharine Macfarlane. It is a thought-provoking show – a story needing told. This emotional, eye-opening journey belatedly honours these so-called witches, ordinary women who may be our great great great great grandmothers or forbears.

Painting is an incendiary device,” says Strang. “It is literally iron, oil and bones.” And ‘Incendiary’ is perhaps the best word for this memorable visual interpretation of perverse persecution. 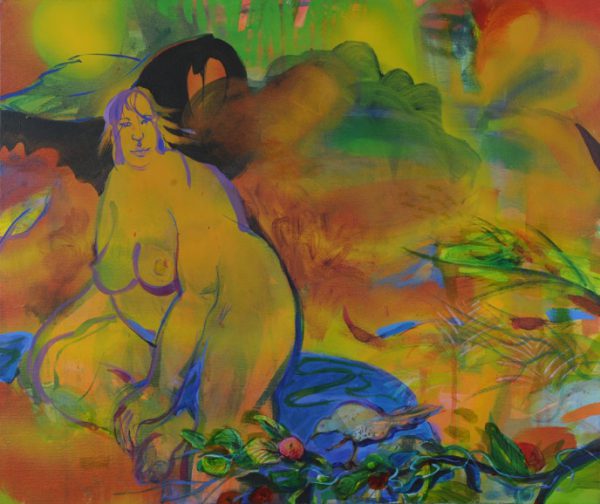 Rosemary Beaton ‘In the Garden’

ROSEMARY BEATON graduated alongside Karen Strang, and currently has a huge, impressive retrospective in Glasgow at 9 George Square: 100 works dating from 1990 to today, coupled with a big new book, (published by Samson, £30 with essays by Sandy Moffat, Alison Harper & me.)

Like Strang, her work is based on an incisive draughtsmanship and colour: exotic exuberant saturated colour. The richer, the better: orange & turquoise, purple and puce. No holds barred! As she tells her students, “There are no rules.”

Beaton shot to fame in 1984. While still a student she won the London National Portrait Gallery award. The judges rightly recognised her gifts for a vigorous line, for wit, boldness and an honest eye.

That eye now has a full blast of life-experience. How many artists can introduce household domestic items like a Hoover along with potent lovers?! Her family of five often features in her work with its focus on people, wry portraits and on the joy of paint and painting. A profound love of the actual physical, sensual enjoyment to be had with paint has never wavered. 33 years on her appetite for painting is just as keen as ever. Above all, she is known for creating vivid, optimistic pictures that make for sheer enjoyment.

This show in central Glasgow’s prime 9 George Square is next door to the building allocated for the National Gallery of Scotland 20 years ago – which failed. After a hard-fought battle, heavy politics orchestrated by Edinburgh won out. A huge mistake and great pity. This superb space shows just what could easily be achieved even now with the right will and, of course, a council with enough cash. Meanwhile, Beaton’s private enterprise has succeeded in achieving a perfect home for her big, ambitious pictures. 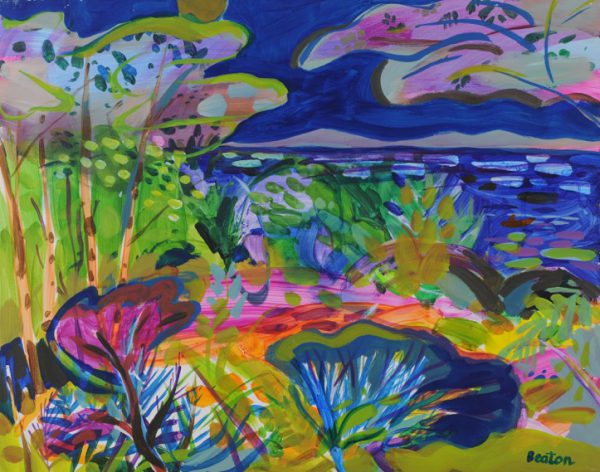 All her work is based on looking – on life drawings done with the model in front of her, or landscapes done directly on the spot in Iona, Arran, Harris or Majorca. Then she takes these drawings as her initial inspiration and incorporates them into imaginative scenarios. “It all starts with reality” she explained. And it all begins with abstraction. I was surprised at this. She told me the pictures all start with colour, brushwork, maybe a monoprint. “If it works I leave it. Then it’s woven into the narrative, into the story, the picture. Things evolve!” The show’s title, “Alternate REALITIES” highlights this process.

Beaton works in series. There is a wonderful series on motherhood – why not when you have four kids. A fractious baby, bored husband, restless daughters, all caught with unsentimental eye. A group of pictures of musicians dating back to 1990 reflect her whole family’s preoccupations. Two important recent series use narrative and imagination. Her “Goddesses” are Beaton’s modern-day re-interpretations of mythological nymphs like Flora, Fortune, Eve, et al. which undermine the traditional male view. Some are, it’s true, rounded, plump, sensual, offering an embrace but others hide subtle political comments on femicide and torture.

At a time of ME TOO, you can see that her focus on the power, but also abuse of women, goes way back. These are not frivolous. They are thoughtful paintings. Picasso’s famous line, “For me, there are only two kinds of women, goddesses and doormats,” would not be well received here.

“Jobs for the Girls” – which includes a gorgeous Songbird still wet off the easel, is her latest notion, capturing all the wit, playfulness and fun to be found in the serious side of life. Even the humorous title sets the scene for a vivid rotund Aviculturist – (posh word for bird breeder), Lesbian Temptress, schoolgirl Truant and a Story Teller – (spot Red Ridinghood.) Frank humour plays a key role here.

Ironically Glasgow School of Art became famous in the 1980s for its fine draughtsmanship via the macho work of men who graduated just ahead of Beaton. In fact, they had nothing like her remarkable ability to make a quirky line sing. Her magical charcoal dances over the paper, always ‘Searching for the perfect curve.’ These two shows confirm the Girls position at the top of their game.

A FINE LINE is a clever title for a quietly captivating collaborative touring show of work by 4 Scottish-based women. All have a passion for drawing, for intricate pattern and detailed observation. Working in very different disciplines: printmaking, ceramics, sculpture, drawing and collage, these four have created a vivid ensemble of elegance, rigour and colour. The show also explores the ‘fine line’ between art in 2 and 3 dimensions, through art/craft boundaries are now basically redundant – for they are all makers of art. 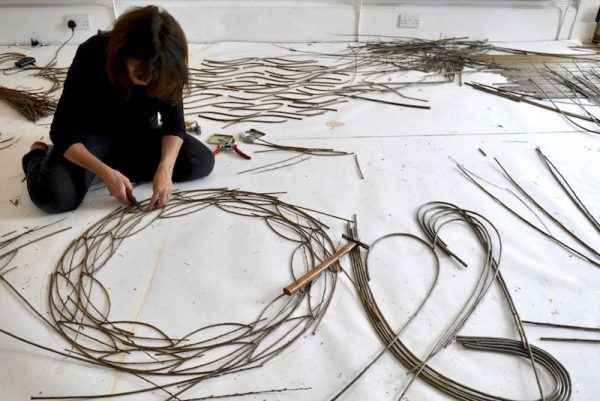 LIZZIE FAREY employs thin willow strands bound together with pin or wire to create beautiful, minimally perfect wall sculptures, ethereal linear mark-making at its best. Often her woven creations are in 3D, but here she has fashioned large wall pieces “more like pictures” using her own home-grown willow, plus birch, heather, bog myrtle & native woods found in her native Dumfriesshire. ‘My Mother’s Garden’ is an impressive wall piece. 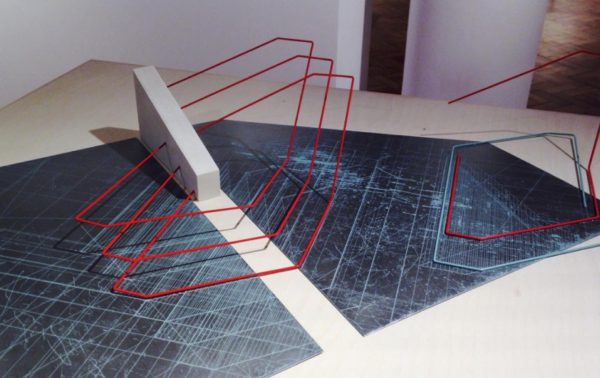 BRONWEN SLEIGH a Glasgow based artist shares her graphic aesthetic, usually working on intricate 2D etchings or rigorous hand coloured geometric lithographs inspired by industrial architecture and the urban landscape. But here she has also ventured into 3D, translating her ideas into open sculptures of wire rods and etched metal plates which make interesting drawings in space. 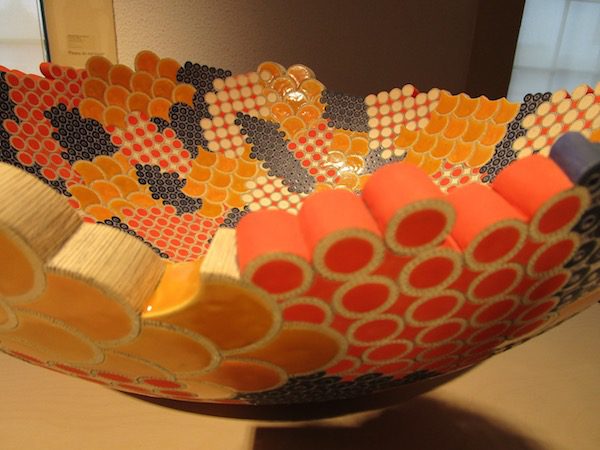 Angular geometrics also feature prominently in the ceramics of FRANCES PRIEST. Pattern is important for all these artists but especially so here. Edinburgh-trained Priest finds new potential in clay to create 3D volumetric abstract art. The pieces are all intricately patterned, too – inspired by a recent visit to Thailand. Hours are spent incising patterns freehand into clay, using a scalpel or modelling tools. Later these are inlayed with clay oxide colours – currently, the turquoises, yellows, oranges, greens and reds inspired by her year abroad. These objects she says, aren’t ‘very serious. They’re quite silly and a bit ridiculous,’ but for sure they ask to be touched. 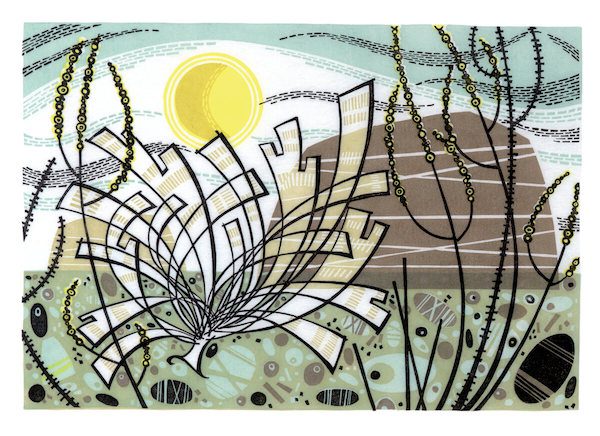 ANGIE LEWIN is the more traditional artist here relying on stylised plants for her bold linos or collages. The show began at Edinburgh’s City Art Centre where it was beautifully hung, & now resides in Inverness Art Gallery for ten weeks before travelling to Gracefield, Dumfries for its final venue. 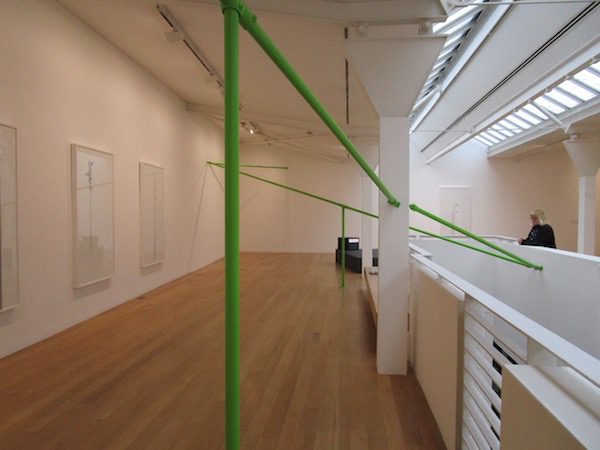 Lines, this time created by aluminium tubing resembling metal scaffolding, or architectural pipes and building rods which draw a route through space, also appeared in JACQUELINE DONACHIE’s Fruitmarket exhibition. Donachie’s video explanation about the show impressed me a lot. Her sister has myotonic dystrophy, an inherited muscular degenerative disorder, which has led Donachie to focus on how disabled folk navigate the world via ramps and handrails most of us ignore. 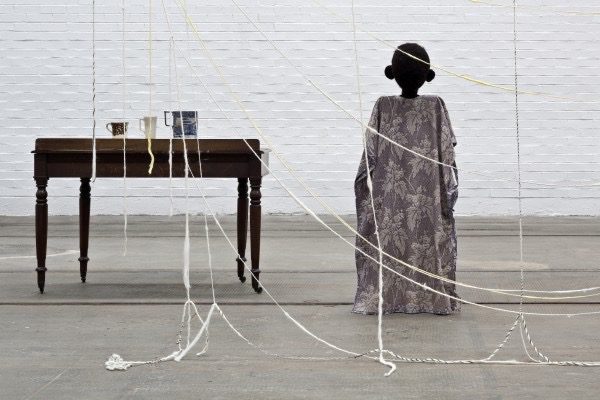 The resulting sculptures draw elegant, eloquent lines in space in aluminium, leather, paper and bronze. A book accompanies this mid-career exhibition from a Glasgow girl who graduated from GSA in 1991, a mere six years after Beaton and Strang, but whose generation turned away from painting to minimalist installation or social-involved public art. Turner nominee Cathy Wilkes (1988 GSA graduate) who has just won the big Maria Lassnig Prize, is another Glasgow trained woman whose focus is installation but of a forlorn, understated melancholy quotidian life.

Beaton, Donachie, Sleigh, Strang & Wilkes are all artists who have helped establish Glasgow as one of the world’s most dynamic contemporary art communities. Happily, all are open minded and heavily engaged in social comment and collaborative work.