GLASGOW PRINT STUDIO is internationally acclaimed, and its 50th birthday is being celebrated in a major, culturally significant exhibition at the city’s main civic gallery, Kelvingrove, with over 225 significant prints by 130 artists, which collectively embodies a Who’s Who of Scottish art over the last half-century. G.P.S. has long played a key role, demonstrating how a tiny artists’ organisation can grow into a regional, national and international player—an inspiring story. 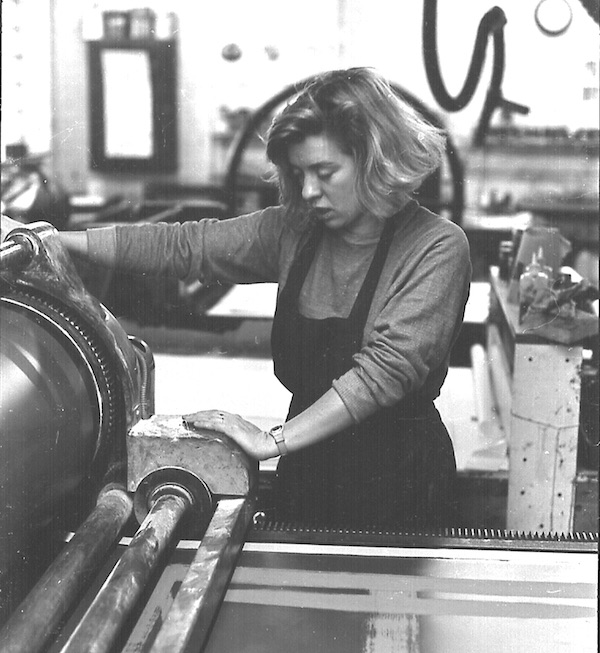 I vividly remember the early days when G.P.S. began in a small, scruffy ground-floor Victorian flat with an earth-floor basement. Four women played the key role. Without them, G.P.S. would never have gotten off the ground.

The co-directors were Beth Fisher and Sheena McGregor. Sheena spotted the St Vincent Crescent premises. “The place was full of dry rot, but rooms were large and airy, rent was cheap, location good.” At 22, she was among a small group planning an open access workshop with Jacki Parry, a student from Australia, later G.S.A. printmaking prof, Glaswegian Ellie Lamb, 21, later prof at Edinburgh and Beth Fisher, an American etcher. All pioneers when women routinely took a back seat.

Jacki credits Beth with the initial spark. “She had arrived from Wisconsin with an etching press which she was keen to share, a pivotal reason for starting a workshop. Beth’s etching press was the catalyst.”

The conversion was tough and done entirely by members. ‘We had no money, no experience but total commitment. It was non-hierarchical, democratic, and idealistic. We believed in it,” Beth explains.

There were eight founders: four women and four men. Beth and Sheena, as prime movers, worked daily. The start-up budget was £3000, and revenue funding was £2650. They bought a Rochat etching press (still in operation today) and went to London for an Offset Litho press. Jacki was the Summer caretaker and they all editioned.

The education programme was important. In 1974 Beth got £3000 from the Gulbenkian Foundation. The school’s outreach programme was a big success and ranged from Notre Dame High girls to “the Barrowfield boys, truancy kids who made great little etchings but had to be frisked as they ran off with the tools! ”

I remember a fledgling exhibition programme with members’ prints hung in the large hall and around presses in two front rooms, priced from £3. In 1974 we hosted a show from Edinburgh Printmakers. 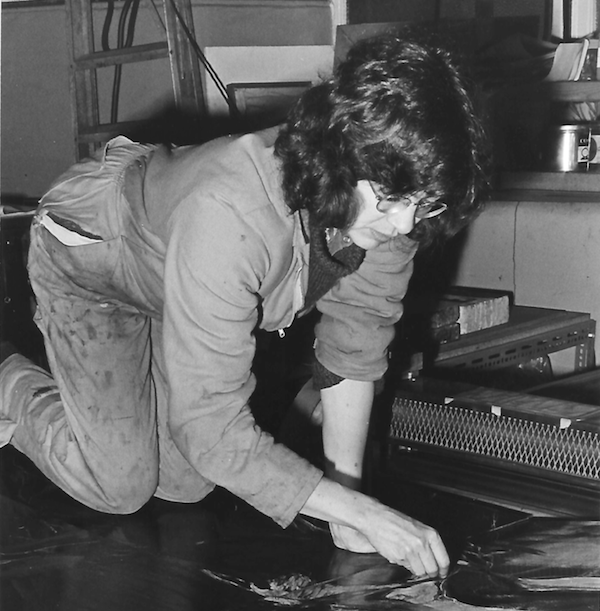 Yet women were still patronised and sidelined. Beth and Sheena dared to have a baby. Arts Council chairman Bill Buchanan wrote, “It was reassuring to pass the prams on the workshop steps.” Discrimination and male bullying was an everlasting problem. Men are still more likely to get a show. Over the past 50 years, men have had over double the number of shows: 430 to women’s 196. G.P.S. has still never had a woman director.

G.P.S. moved to its second home at 128 Ingram Street in 1976 under the direction of Calum MacKenzie. It was well-established, but Bill Blacker remembered, “MacKenzie terrified me with his wild disregard of business practice or good record keeping.” Yet despite MacKenzie’s male chauvinist approach and dismissive attitude to women, never tolerated today, he did stage memorable extravaganzas like the fabulous ‘Loveliest Night of the Year art balls held at Kelvingrove. There were all night post exhibition parties too, with roasted pigs, 8 barrels of beer – and deficits afterwards.

MacKenzie also invited writers to use the gallery.” I first saw John Byrne’s famous Writer’s Cramp play premier there. In 1978 security for a blockbuster L.S.Lowry show, valued at £3m, was a guard who slept overnight inside the gallery! Happily, the show coincided with a chart-topping number one pop song, Matchstalk Men, so at 10p, visitors came aplenty.

Funding from the Scottish Art Council in 1977 was £9000, £10,000 in 1978, and £14,500 in 1979. Wheels were oiled in novel ways. S.A.C. staff and District Councillors received Valentines on Valentine’s Day, carol singers at their door at Christmas, and pranks on April 1st! With notable exhibitions from Max Ernst, Paolozzi and Mark Gertler behind it, there came a sad day in 1982 when S.A.C. decided G.P.S. was ‘overstretched.’ McKenzie left.

In 1983 I discovered that a hugely ambitious arts festival, “Britain Salutes New York’ contained nothing from Scotland. As it was the Glasgow Herald’s bicentennial year, I asked my editor to sponsor the show. I included all four Scottish workshops with prints by Bellany, Blackadder, Will McLean, Philip Reeves and many more. It travelled from New York to Canada and had critical acclaim.

John Mackechnie, who arrived as an etching technician, took over as general manager later that year. When a leaking roof forced G.P.S. out of Ingram Street in 1988, G.P.S. benefitted from the expansionist 80s, was soon installed in the Merchant City’s King Street. Adrian Wiszniewski, later chairman, inaugurated an elegant new gallery. 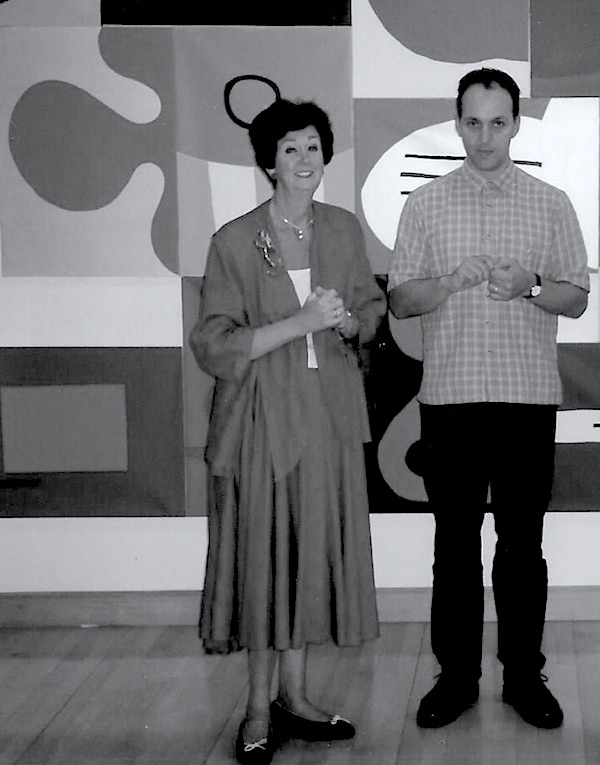 Glasgow’s annus mirabilis – European City of Culture 1990, an unforgettable 12 months which changed the perception of Glasgow worldwide – resulted in a turnover of £400,000, with £280,000 self-generated. A growing reputation for editioning attracted artists and buyers, and an artist’s exchange programme resulted in hundreds of friendships, the best legacy of 1990. And in 1993, G.P.S.’s 21st birthday was celebrated by a big show at the McLellan Galleries.

The Print Studio has many loyal staff, none more so than Stuart Duffin, who spent 40 years as a master etcher, collaborating with artists like Dame Elizabeth Blackadder on her 100+ etchings. “See this stunning exhibition,” he recommends. “It also includes a great snapshot of the current G.P.S. activity – 50 artworks by 50 members”

I covered G.P.S. exhibitions for 20 years before I left the Herald in 2000 for New York and the Financial Times, demitting office as G.P.S. chairman when I became Herald art critic in 1978. I loved the workshop. In 1973/4, fees were 25p for 3 hours. I had the key, going in at night. My prints were colourful, reflecting the times.

In the last 45 years, I have reviewed more than 350 GPS exhibitions. It must be the best-documented print studio in the world. Check it out at www.scottishArtArchive.com. No wonder G.P.S. has a special place in my heart.