From early on in their history, churches have regularly been spaces in which art was displayed and valued. That continued in the modern period, although the extent to which this so became somewhat obscured and the relationship between churches and artists became somewhat fractious. Nevertheless, there are many examples – from past and present – of churches showing contemporary art, whether as permanent commissions or in temporary exhibitions/installations.

To make best use of such spaces, curators need clarity of purpose while remaining open – JE

Alongside, more recently, has also been an interest among galleries and curators in showing contemporary art in churches. Such site-specific exhibitions or installations evoke contemplative and meditative encounters with contemporary art seeming to offer audiences a secular experience of mindfulness and awe, and artists the opportunity to engage meaningfully with the unique architecture and atmosphere of the space in which they exhibit their work. While many examples exist, four recent, current or forthcoming projects illustrate a range of approaches.

Dawn Ng: Into Air was at St Cyprian’s Clarence Gate, London, from 7 – 23 July 2022. Time – its flows, echoes, and slips – was the subject of this, Ng’s debut solo show in London. By creating and documenting the disintegration of large sculptural blocks of frozen pigment, Ng prompted us to reflect on the properties of cyclical passing, and how beyond numerical chronology time is a matter of feeling and moment-making. Her ambitious assemblage of photographs, paintings, installation and video, came in three parts – a series of photographs, ‘Clocks’; a series of films, ‘Time Lost Falling in Love; and a series of residue paintings, ‘Ash’ – with each work possessing its own monumentality and presence of time. Filmed as they fracture, the slow disintegration of the frozen pigment was captured in her time-lapse films. The melted pigment also provided the source of the paintings. Ng’s cyclical constellation mirrored the metamorphosis of ice from one state to another, enacting creation, degradation, dereliction and rebirth. 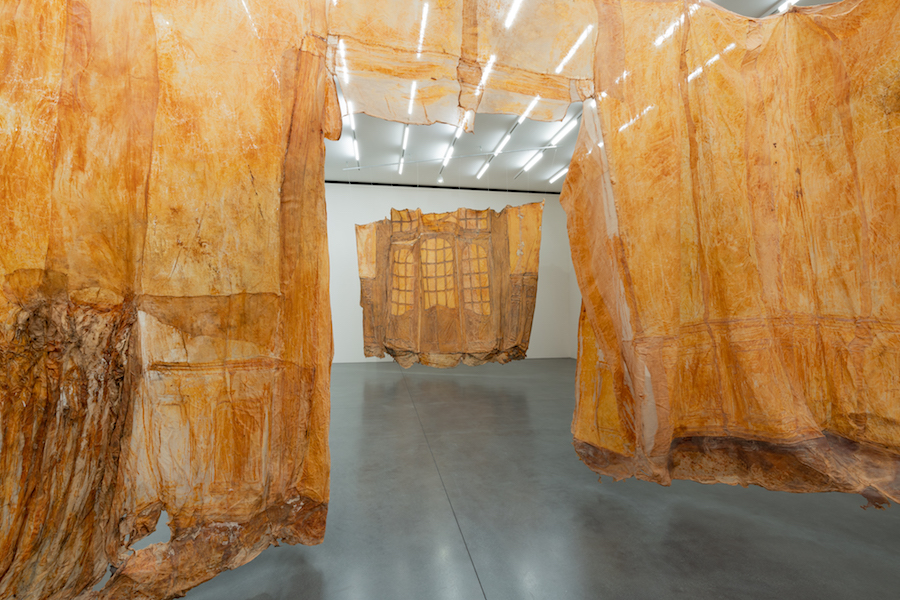 In an interview with Chandreyee Ray for Vogue, Ng pointed out parallels between her work and Biblical concepts of time:

“I think there is a strong synergy between what ‘Into Air’ tries to express and what the space inherently possesses. The Bible holds some of the most fundamental concepts about time—the Alpha and Omega, the start and the end.

Even the Greek term “Chronos” speaks of chronological time, while “Kairos” is what mystics would call deep time, or Christians would call God’s time—time not measured in numbers, but in seasons and moments.”

Into Air was also manifested as a choral performance piece born from a close collaboration between Ng and Welsh Composer, Alex Mills. The live site-sensitive choral piece utilised the resonant space of the church as it unfolded in harmony with Ng’s timelapse film documenting the start-to-finish disintegration of the large block of frozen pigment from monumentality to nothingness. In tandem with the luscious collapse of ever-shifting hues and textures, the music, paused, breathed and reflected in response, forming an ethereal companion to the film. Into Air sang in St Cyprian’s, imbuing its enduring walls and historicity with an ephemeral moment, akin to a breath, in which one felt and remembered.

Jaume Plensa: In small places, close to home is at Yorkshire Sculpture Park, Wakefield, from 18 June – 30 October and comprises two complementary installations of drawings that convey the richness of Jaume Plensa’s drawing practice. It highlights the artist’s devotion to a medium that embraces many materials and processes including collage, etched glass, industrial paints and solvents, and extends into three dimensions via wire drawings in space.

Works displayed in The Weston Gallery reflect Plensa’s belief in the importance of embedding human rights in political systems and of unifying diverse cultures, ages, genders, faiths, and ethnicities. Face is a series featuring portraits of people from across the globe, taken from the artist’s collection of old geography and anthropology books. Their images are melded with excerpts from the Universal Declaration of Human Rights, which Plensa describes as “the most beautiful poem in the world” as it expresses a human desire to be better despite our imperfections. Words forming figures, and therefore identity, is a motif that runs across many of the works in this show

The exhibition continues in the 18th-century St Bartholomew’s Chapel, where facing each other in silent communion in the nave are two sublime marble sculptures of girls’ heads with closed eyes that imply optimism for a world community and hope for shared humanity. Their skin is covered with letters from different world alphabets, a motif that Plensa often uses to suggest the importance of togetherness whilst retaining their own richly unique cultural identities.

Adorning the walls are the dark forms of Anònims, a series of 16 large-scale drawings. Shadowy, almost human-sized bodies with unknown faces that stand as cyphers for generations, a community of souls. On the altar wall, works from the Continents series portray bodies as maps and geographies, and in the Chapel Garden visitors can walk inside the four-metre-high sculpture White Nomad, its body made up of a fretwork of letters.

Like the sculptures for which he is best known, Plensa’s drawings investigate the human condition and dream of more progressive and united global futures, exploring opposing concepts such as language and silence, darkness and light. Extending the show into a sacred space, allows the exhibition to resonate with the Chapel’s qualities as a spiritual and meditative place. His marble sculptures of girls’ heads with closed eyes facing each other are a particular embodiment of the sense of meditative communion that imbues the sacred space of the Chapel.

Heidi Bucher: Metamorphoses II at Muzeum Susch in Switzerland is housed in a 12th-century monastery and brewery on the ancient Santiago del Compostela route which thereby also encourages a slower, more contemplative approach to art. Metamorphoses II is a major retrospective of Bucher’s work, premiering rediscovery and restored filmic documentation of her practice which has enabled curator Jana Baumann to consider Bucher’s work under the prism of performance for the first time in her native country. Emphasizing Bucher’s pioneering use of interweaving media, the exhibition features more than seventy key works, including newly rediscovered and restored film material, sculptural installations and works on paper. Inspired by the artist’s manifesto Parquet Dragonfly, the title and premise of the show focus on Bucher’s artistic approach as a “process of metamorphoses.”

Taking possession of and transforming spaces became a leitmotif of the artist’s work in the mid-1970s, beginning with the skinning of her own artist’s studio Borg in the cold storage room of a former butcher’s shop. She applied liquid rubber to the floor and walls of the rooms she skinned enabling her to then pull away and display the rubber skin. She often chose rooms which had private and public significance at the same time, such as the Bellevue psychiatric clinic on Lake Constance, where Sigmund Freud treated his first subject, or the entrance portal of the abandoned Grand Hôtel Brissago on Lake Maggiore, which became a state-organized ‘internment home’ for Jewish children and women during the Nazi regime. Bucher conceived of the skins she created as interfaces to these worlds and as sensory storehouses of memory.

While she exposed social and private power structures with her skinnings, Bucher also opened these spaces for change. In her manifesto ‘Parkettlibelle’, she described her work as a “process of metamorphosis,” in which the detachment from social conditioning went hand in hand with the softening and mobilization of objects, and indeed of static relationships. Bucher’s oeuvre bears witness to an artistic discovery and emancipation of the sensual, feeling body in the twentieth century, preparing the ground for genderless utopias and positioning herself resolutely against rejection, oppression, and discrimination.

Set in dialogue with the unique architecture of Muzeum Susch, the artworks reflect Bucher’s ongoing exploration of the interaction between psychology and space, specifically focused on the gender, social, and political norms historically associated with it. Muzeum Susch, founded by collector and leading Polish businesswoman Grazyna Kulczyk, is dedicated to championing overlooked women artists and recreating a matrilineal art historical canon. With her sculptural and performative material transformations, Bucher explored the dynamic relationship between bodies and space in works that challenged artistic categories. A similar transformation exists in this Museum, as its buildings, purpose and use have also been reconstituted. In this instance, the exhibition and works ask significant questions of the sacred space in which they are displayed.

Finally, with Joana Vasconcelos: Tree of Life at Sainte-Chapelle De St. Vincennes, Paris, we have a 13-metre-tall tree created from over 110,000 hand embroidered leaves, inspired by Bernini’s iconic Daphne and Apollo and the myth behind this artwork. (see top photo) Vasconcelos and her artisans have sought to create a textile sculpture that parallels Daphne’s powerful gesture of independence in a scenario of limitation. The embroidered leaves were crafted during lockdown using a traditional Portuguese embroidery technique, resulting in a powerful textile structure, representing Daphne’s power and self-determination. This tree is the result of the affirmation of life beyond the Covid-19 pandemic. The artwork also strengthens the artist’s connection to France as her birthplace and the cross-cultural exchange between Portugal and France.

While none of these inspirations and references relates specifically to Sainte Chapelle, installing a Tree of Life in this building does bring into play another set of religious resonances involving the Tree of Life in the Garden of Eden and also the tree of knowledge, connecting to heaven and the underworld, and tree of life, connecting all forms of creation, as forms of the world tree or cosmic tree. Jean-François Chougnet, curator, notes the Biblical references: “A vertical link between heaven and earth, in the Bible the tree is indeed a symbol of man’s relationship with God. Because it provides shade, it’s a place to stay, a privileged place to meet. The Bible ends in Apocalypse with a tree of life that bears fruit every month and whose leaves are medicine in the midst of heavenly Jerusalem. Symbol of prodigality, generosity and eternal life, it also reminds human beings that they do not have absolute power over people and things. The tree reminds us to live with respect for the environment.” In this instance, then, the sacred space brings its own resonances to the artwork deepening the range of references beyond that originally intended by the artist.

All these ways to relate to churches or other sacred spaces – referencing sacred concepts or imagery, complementing contemplative space, asking questions of the space and its stories, or allowing a broader, deeper range of resonance to encompass the art – have value as ways to interact with spaces designed for purposes other than the display of contemporary art. To make best use of such spaces, curators need clarity of purpose while remaining open to the myriad of surprising ways in which the space may interact with the works.