A trip to the magnificent Palladian house Houghton Hall in Norfolk is always a much look forwarded to pleasure. The current exhibition is a major show of works by Henry Moore, in collaboration with the Henry Moore Foundation. For the last few years the current owner filmmaker David Cholmondeley, 7th Marquess of Cholmondeley and his wife Rose, a researcher, have staged an exhibition programme of international Modern and Contemporary artists including James Turrell (2015), Richard Long (2017) and Damien Hirst (2018). 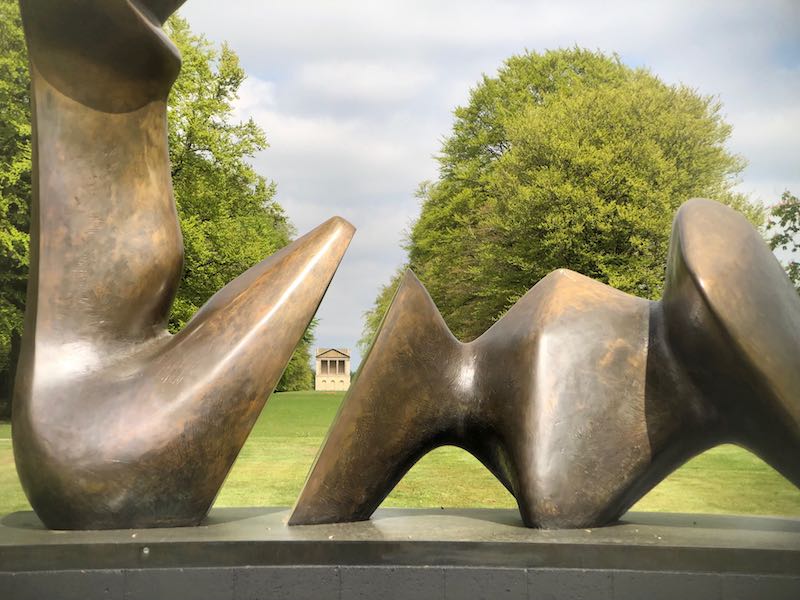 Houghton Hall was built by Sir Robert Walpole, the first Prime Minister of Great Britain, in around 1722 and designed by Colen Campbell and James Gibbs with interiors by William Kent. Sir Robert’s great picture collection was sold to the Empress Catherine of Russia in 1779, but the furniture, bronzes and Roman antiquities were left intact, as well as the family portraits, and the original silks and velvets have survived in remarkable condition. Houghton and its estate passed to the Cholmondeley family at the end of the 18th Century and is still a family home. The house is elegant and the award-winning grounds immaculately kept in preparation for the Summer opening. 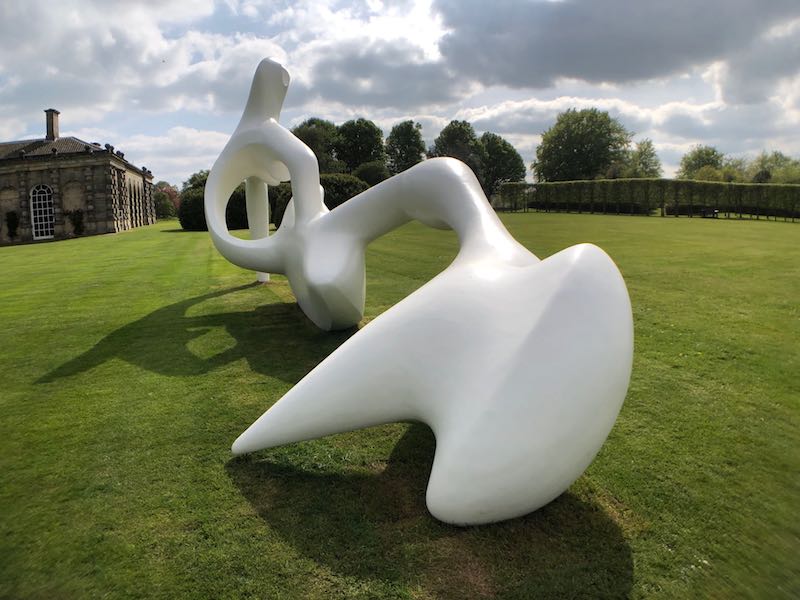 My local stately home is Kenwood House which has a Henry Moore sculpture in its grounds, Two Piece Reclining Figure, No. 5, bronze, 1963–1964. So I am used to the pairing of historic buildings and modern sculpture. Nevertheless, Houghton Hall is far more spectacular and the selection of outdoor sculptures is grander. 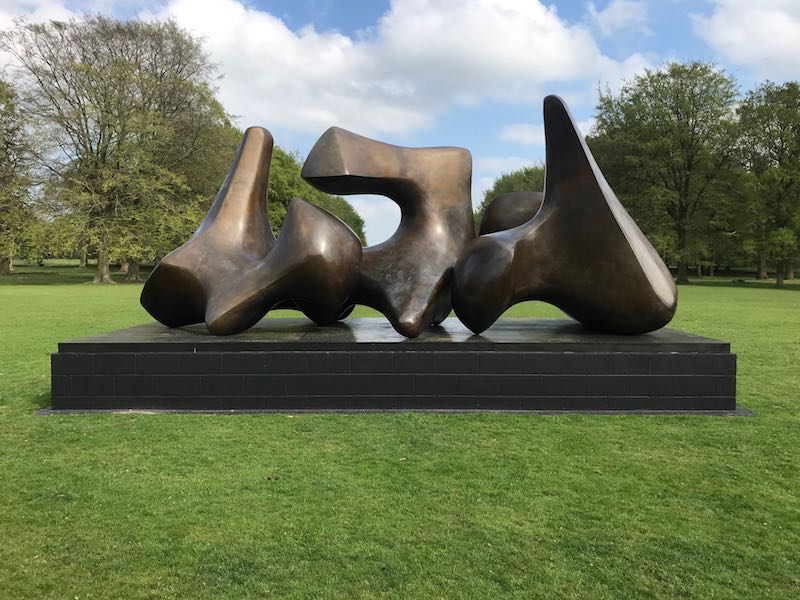 Henry Moore (1898 – 1986) is considered to be one of the most important British artists of the 20th Century and arguably the most internationally celebrated sculptor of the modern era. Moore was a pioneer, and the first British artist to become a global star in his own lifetime. His work came to symbolize post-war modernism and can be said to have caused a British sculptural renaissance. He worked in many different mediums, but his most recognizable works are large bronze groups using both figurative and abstract elements. He also produced fibreglass versions of some of his most iconic pieces, specifically for exhibition, and two of these are on show at Houghton. 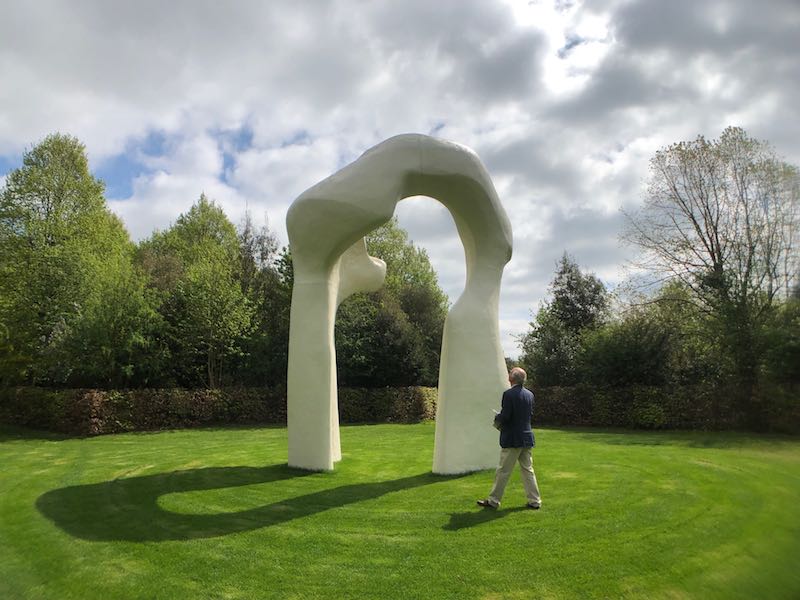 Curated by Sebastiano Barassi, the Henry Moore Foundation’s Head of Collections & Exhibitions, the exhibition includes several monumental outdoor pieces in the grounds of the house such as Large Reclining Figure 1984, The Arch 1963-69, Three Piece Sculpture: Vertebrae 1968-69 and Upright Motive No.8 1955-56. A selection of smaller works, models and etchings are in the ground floor gallery spaces including maquettes for Spindle Piece 1968 and the original flint stone that inspired him. A large bronze version of Spindle Piece lies at the entrance to King’s Cross station which is where we boarded the train to King’s Lynn – the nearest station to Houghton Hall. The sculpture takes on a completely different feel in this urban setting more industrial, machine-like far removed from its original natural inspiration. 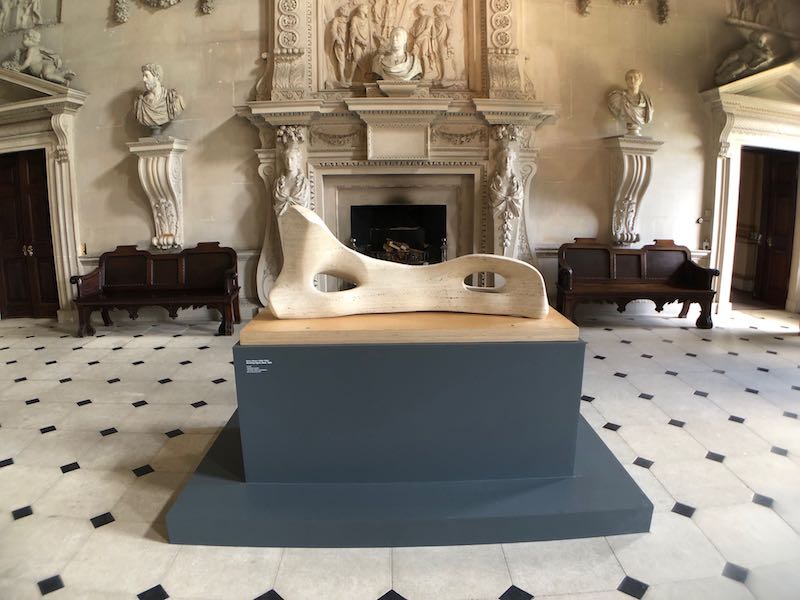 There are also sculptural interventions in the State Rooms, particularly in The Stone Hall where the travertine marble Reclining Figure: Bone, 1975 has been placed matching the colour of the William Kent interior. Here Bird Form II in black serpentine echoes the shape of the statue of the bronze Laocoon Group behind it. Bird Form I has been placed on a marble consul table in one of the State Rooms surrounded by family portraits which have been restored to their rightful places after last year’s substitution for the Damien Hirst spot paintings. 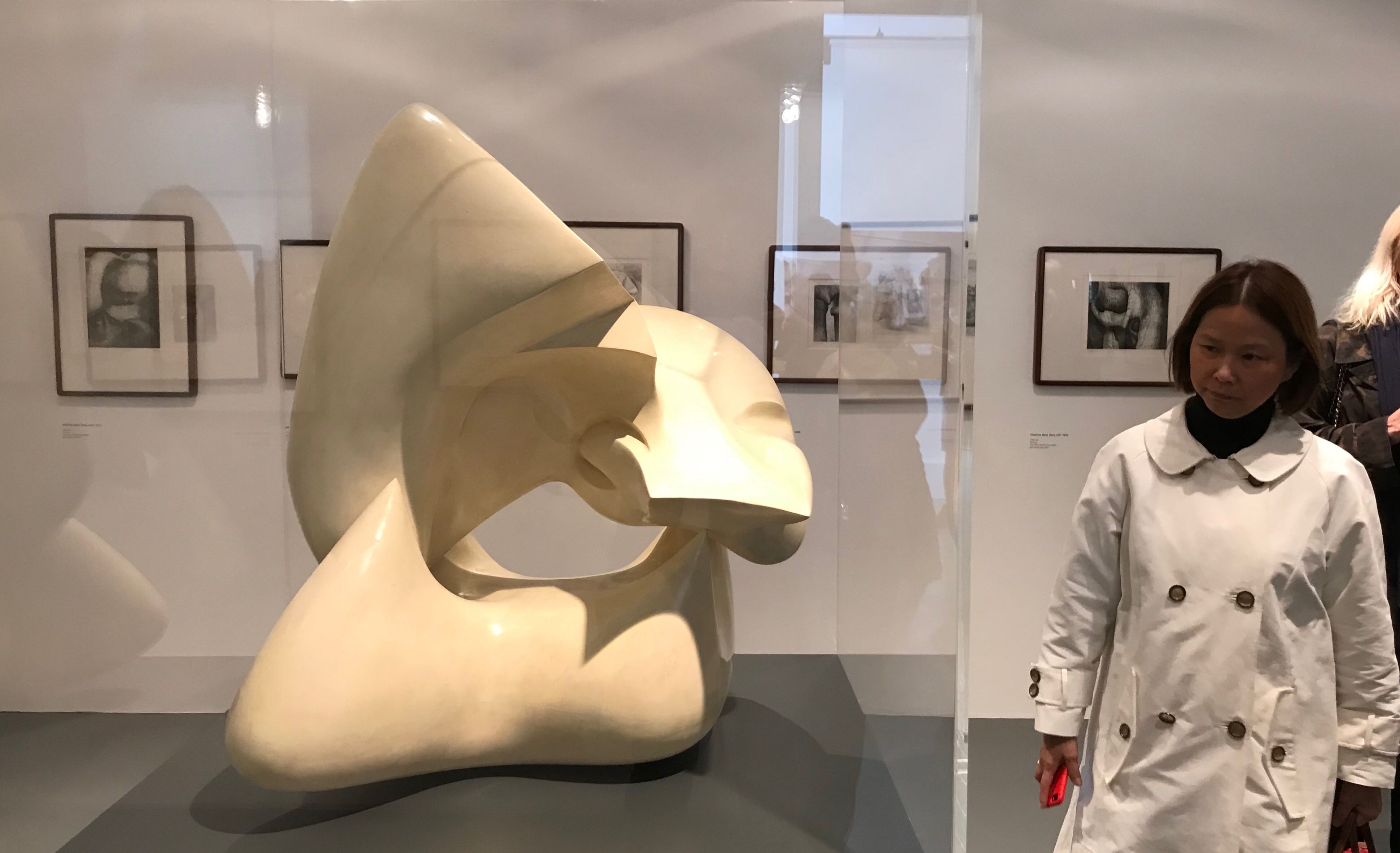 Another interesting room is one of the downstairs galleries which has on display a piece from Moore’s private collection of natural objects – an elephant skull given to him in 1968 by his friends Julian and Juliette Huxley. Huxley was a well-known biologist and Secretary of the London Zoological Society (1935-42). Moore especially liked bones for their texture and structural complexity. The skull is surrounded by framed prints from the series of Elephant Skull etchings plus the sculpture he based on the skull which is the only work he conceived specifically to be made in fibreglass which he felt matched bone in terms of colour and the combination of strength and lightness.