Gallerist James Payne from PayneShurvell visited Brussels recently during BRAFA and has selected his highlights from the fair.

Art fairs are a great way to see a huge range of international work in a short amount of time, discover artists you didn’t know, and see what is trending. On the negative side, the work is increasingly commercial, work the dealers know is going to sell to the super-rich. Picking the right art fair to go to is as important as picking the right art.

Unlike commercial art fairs like Frieze, BRAFA is run by a committee that includes participating gallerists who have to approve every single work before it goes on display. It is organized every year by the nonprofit Belgian Antiques Fair Association. I’ve been to dozens of art fairs but this is my first time visiting BRAFA art fair in Brussels. And I must say, it was one of the nicest I’ve experienced.

BRAFA is one of the world’s oldest (created in 1956) and most prestigious art fairs. It is the first major art event of the year, and so it is considered a good indicator of the direction the art market is going. It is not massive, with 134 exhibitors so you can easily manage everything in a day. Unlike most art fairs it doesn’t feel crammed in and doesn’t have harsh headache inducing lighting. One refreshing thing about BRAFA is that the gallery staff seem to be happy and willing to engage in conversations about the work.

But eclecticism is what makes this fair special, with works from antiquity to contemporary art. Every era is covered from every angle. From ancient Roman busts to comic strips, from antique jewellery to teenage mutant ninja turtles! Prices too were ‘eclectic’ with some works in the millions and some for a couple of hundred.

Here are ten highlights of this year’s BRAFA: 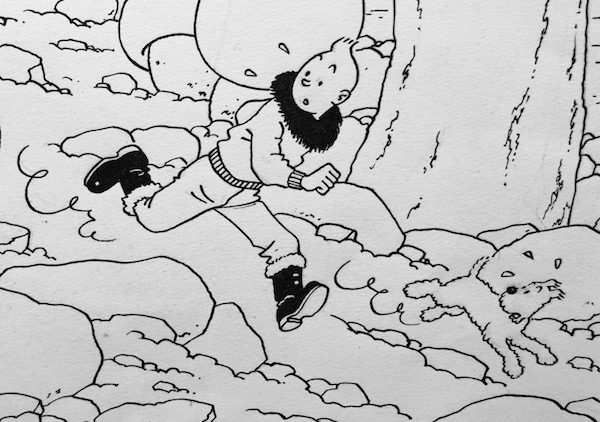 Belgian comic strips or bandes dessinées, are world famous, and none more so than Hergé’s little reporter Tintin, who looks great considering he’s nearly 90 years old! The twenty-four Adventures of Tintin are a comic book series written and drawn by the Belgian Georges Remi, commonly known as Hergé. Rare original drawings by him, such as the one above, can be found at Belgian Fine Comic Strip Gallery, whose focus is on the ‘Ecole Belge’ or ‘Ecole de Bruxelles’. 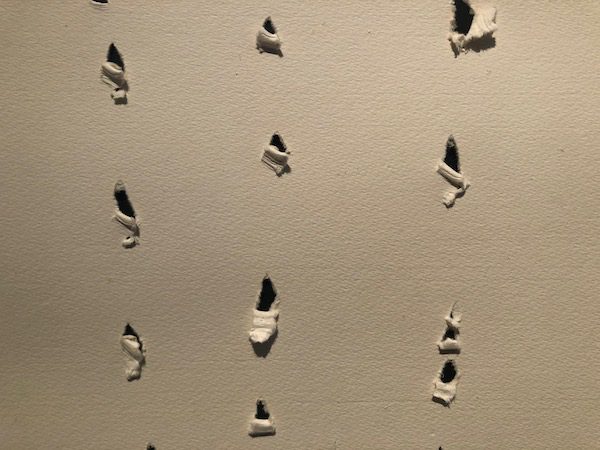 There were several pieces I loved on Phillip David and Thomas Salis’ stand including a lovely Tàpies cardboard piece from 1975. But this simple Fontana (Spatial Concept, 1964-65) from his series of Spatial Concepts, show how Fontana went beyond the surfaces of sheets of paper to what he called “a free space.” The simplicity of the puncturing and piercing is beautifully subtle here.

Roman Votive Male Genitalia, 2nd-3rd Century. These Roman Votives caught my eye and certainly would be a talking point in your home! As with all votives, these were given to the gods either in the hope of a cure or as thanks for one and were made in the shape of the afflicted body part. I was informed by the gallery that the votive marble penis and testicles may have been given in thanks for a cure for impotence or infertility. However, we have no way of knowing if it worked… 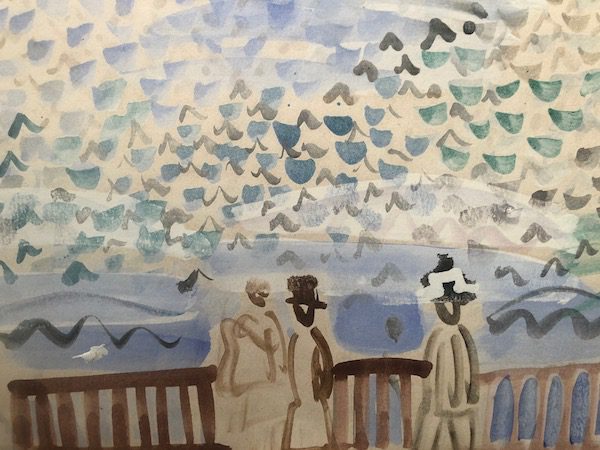 I LOVE Dufy who always cheers me up, and there were plenty of Dufy at BRAFA. But this one at Harold t’Kint de Roodenbeke Gallery really grabbed me. La Mer Moutonneuse (White water) is a delicate little watercolour, with some lovely spontaneous sketch-like figure in hefty strokes. Dufy’s playful reverence for the shifting seascape is a delight and the energy bursts off the page. 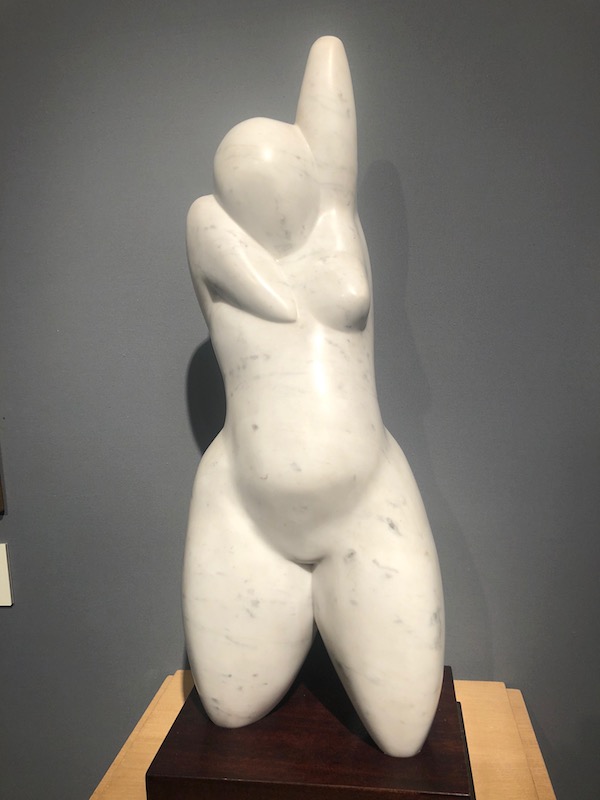 Also at the Harold t’Kint de Roodenbeke Gallery stand was Man Ray’s Herma. This is the first time I’ve seen these in the flesh, so to speak. Man Ray who is more well-known for his photos made different versions of Herma, but this is one of the original editions made of marble in 1919. the work evokes ancient sculpture here by his choice to carve the figure without complete arms and legs. The focus is on the exaggerated rounded stomach and thighs emphasising fertility. 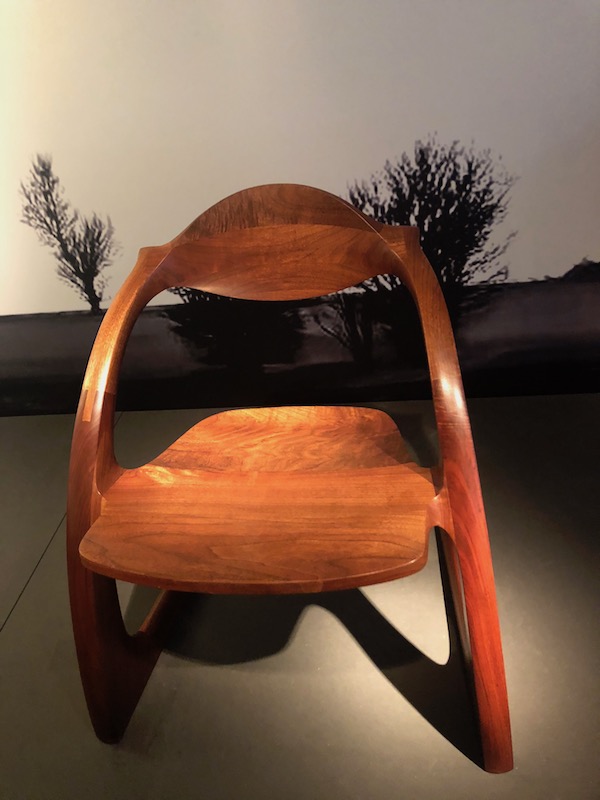 There is no hierarchy in art. Work is either good or bad, successful or unsuccessful, but it isn’t lessened by being useful – Wendell Castle

Sadly Wendell Castle, a genius with a lathe, died just days before BRAFA opened. This Zephyr Chair made from Walnut in 1979 is at Galerie Le Beau’s stand. It is extremely rare and is usually the sort of piece only found in museums. Castle worked for over fifty years and his work transcends furniture. It is pure and simply art. Of course, you could sit on it, but you would have to have an extremely delicate (and rich) bottom.

I’ve already mentioned eclecticism at BRAFA, and seeing this wonderful stand with spectacular mid-century furniture was one of my highlights. 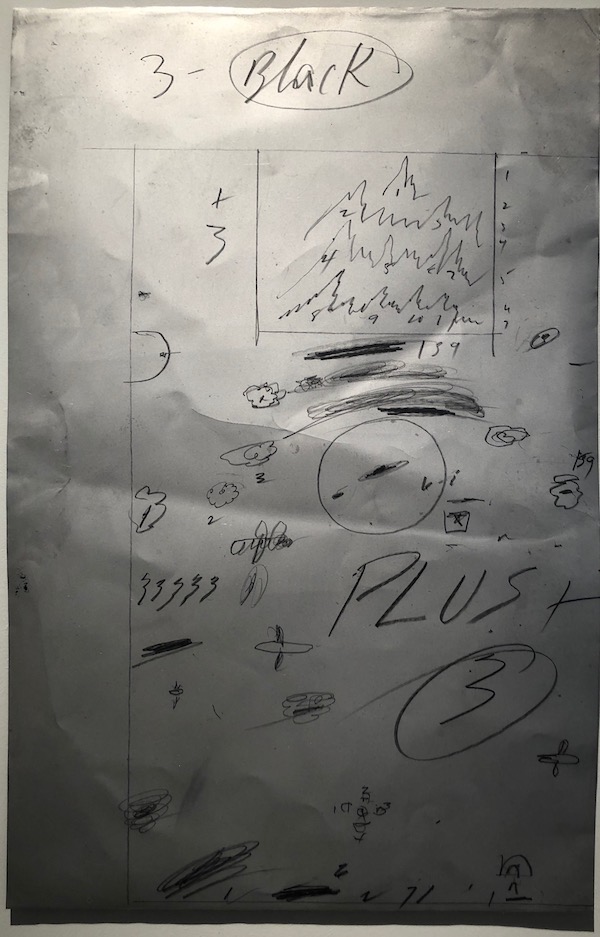 I don’t really understand Cy Twombly, which is exactly why he is one of my favourite artists. Criticised for what many saw as childish doodles, Twombly battled years of criticism for his approach to drawing, but achieved success despite or perhaps because of his departure from abstract expressionism. Samuel Vanhoegaerden Gallery has this ‘Untitled Project for “Plus 3” magazine’ on its stand. I’m not 100% sure what the title means, as I forgot to ask, and don’t really care. It is simply a series of marks in pencil on aluminium that like most of Twombly’s work is so unique you don’t really have to ‘get’ it. Lovely. 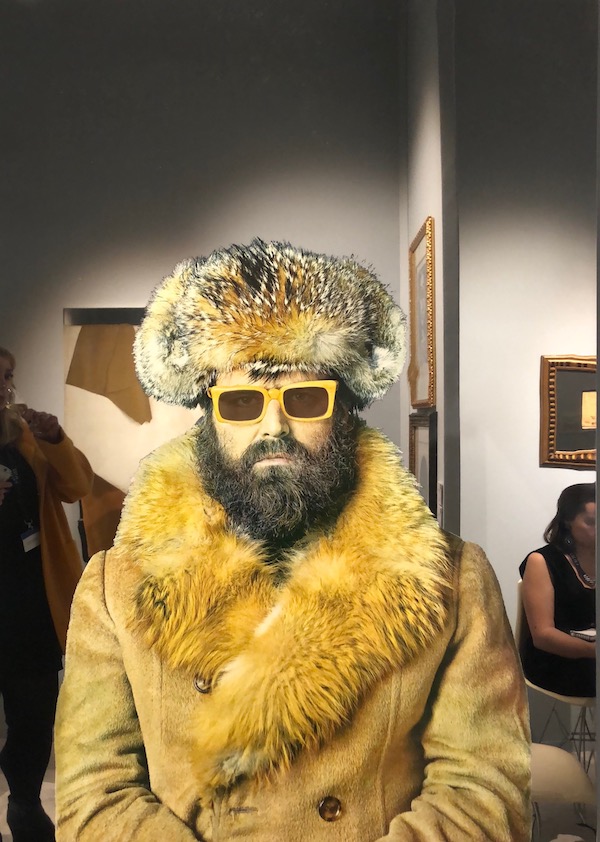 This is one of two works at the fair I considered mortgaging my house for. Michelangelo Pistoletto is regarded as one of Europe’s most influential contemporary artists and was a leading figure in the development of the Arte Povera (Poor Art) movement in Italy. He has been working on series of self-portraits since the 1950s. Still going strong (I saw him perform at the 2107 Venice Biennale), he is best known for his “mirror paintings” beginning in the 1960s on canvas. Eventually, he used polished steel with photo-silkscreened images of people on it (as seen here) where the environment and the viewer are reflected, thereby becoming an integral part of the work too. 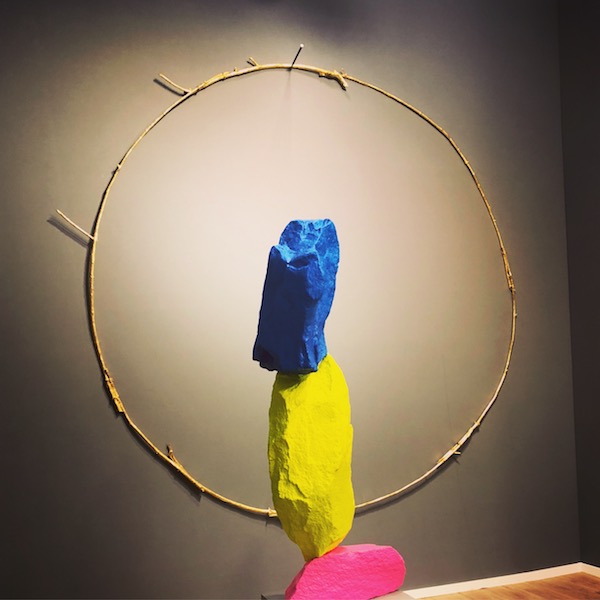 Pink, Yellow, Blue Mountain is the other one that I would consider mortgaging my house for. Gladstone gallery, based in New York and Brussels, has played a significant role in promoting Ugo Rondinone. I first became aware of his work at Sadie Coles in London and have been a big fan since. For over twenty years his paintings and sculptures often referenced the natural world in both titles or forms. These new works resemble hoodos (naturally-occurring spires commonly found in dry, desert areas), but also maybe the art of rock balancing as a form of meditation? The Sun at 4 pm, seen here in the background, is made of branches cast in aluminium and then gilded. Both pieces suggest a suspension of time. Sun was by far, my favourite piece in the entire fair. 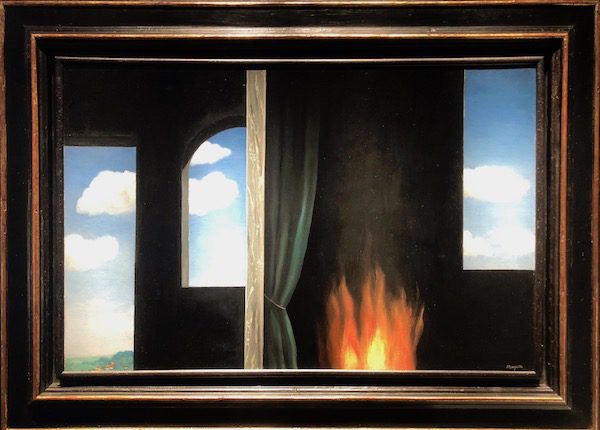 As BRAFA is in Brussels and we started with Hergé a world-famous Belgian, we should also finish on one, Magritte. I remember that the Simon Dickinson gallery at Frieze Masters a couple of years ago had a very famous Magritte (L’Empire des Lumières) on sale for $25 million. For a much more reasonable €4 million, you could own Magritte’s L’Oracle (pictured here)!

But it wasn’t all about how deep your pockets are, I saw plenty of work that was reasonable and worth getting the credit cards out for. My problem is I have Champagne taste on a coca-cola budget so came away empty handed!

BRAFA was a revelation and I will be back next year for sure. What a treat to see such a mixture of high-quality work combined with knowledgeable and friendly gallery staff.

As a bonus there was also: 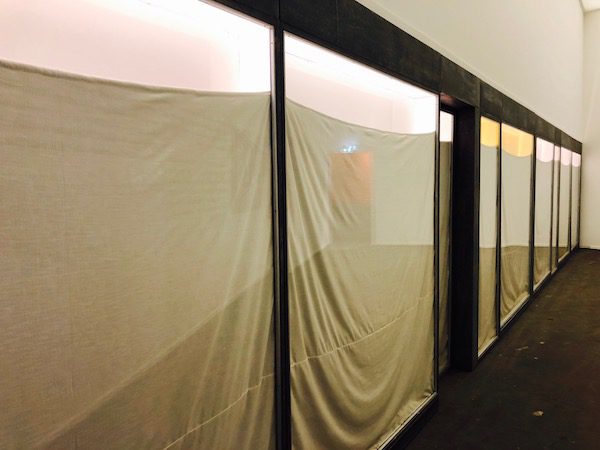 The largest work on show at BRAFA is a piece chosen personally by the iconic monumental land artist Christo. Three Store Fronts (1965-66) is 14m wide x 2.4m high, created by Christo and his late wife Jeanne-Claude just after they moved to New York and inspired by the monumental scale of New York. 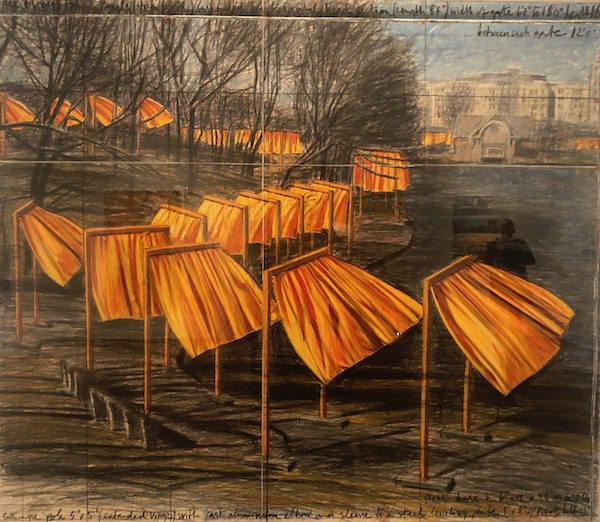 Christo and Jeanne-Claude The Gates

And if you like Christo, as I do, there is a fantastic show at the ING Cultural Centre in Brussels, the first retrospective since the 1980s! The show has over 80 original artworks and projects, some of which were realised, and some not. The exhibition traces projects from the first schematic sketches, usually in small format, to the final drawings, complex and often large-format collages in which colour, textural effects and volume bring out their visionary character, offering a real foretaste of the actual in situ projects.

There are of course the famous projects like The Gates in New York City or The Reichstag in Berlin, but there are also lesser-known projects, like Wall of Oil Barrels. Some of the projects, like Project for 1 Times Square, Allied Chemical Tower N.Y., you can only dream about.

One of the highlights for me was seeing the documentaries about Christo and Jeanne-Claude made by the legendary Maysles Brothers (Grey Gardens, Gimme Shelter). This is a must-see show!

Words and photos by James Payne