Over the next few months, we will be profiling a number of international artists of importance. The Italian artist, Andrea Martinelli, is highlighted here by our New York correspondents Gina Hanson and Jerry Kaye, who met the artist in Italy.

We met Andrea in Prato, his hometown and our base in Italy. His work is inspired by local people. The photographic quality of the paintings and drawings tell a story written in the lines and character of their faces. Martinelli is a significant talent. His oversized portraits remain unashamedly contemporary, while retaining traditional techniques and processes.

Andrea honed his talent by attending the Porto Romana Art Institute of Florence. Shortly after graduating, he won the “Tito Conti” prize from the Academy of Drawing Arts. The prize included a study grant that served as the catalyst for his solo career. His solo career exhibitions include the European Parliament in Strasbourg, the Frissiras Museum of Athens, the Permanente Museum of Milan, and the Panorama Museum of Bad Frankenhausen, Germany. 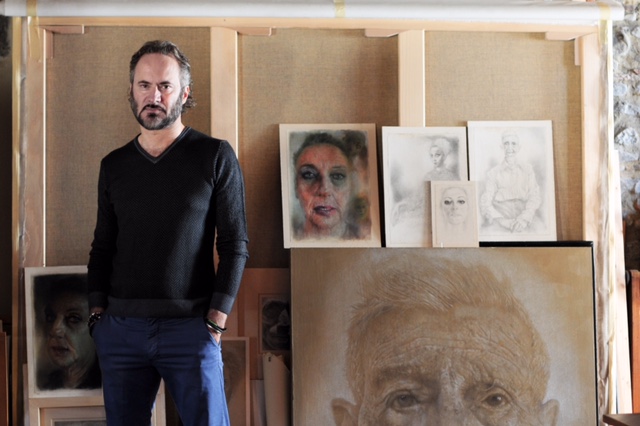 “This world, the world in which we live, has been completely dehumanised. We have completely erased man. And this is not good. But we, all of us, especially artists, have a duty to bring man back to the centre of everything. It is not for me to judge the work I have done all these years, but I know for sure that I have turned my gaze on man, and I have done it with love. A new humanism is possible, and everyday I fight for it “.

Andrea Martinelli was born in Prato on March 12th, 1965. He graduated at the Porta Romana Art Institute in Florence and, in 1988, he won the “Tito Conti” Prize and was given, by the Academy of Drawing Arts, as a study grant, a prestigious atelier in Piazza Donatello in Florence for five years. From 1992 to 1993, he dedicated all his energies to the painting of a series of works titled Senescenze, which attracted the attention of art critic and historian Giovanni Testori and were shown in Florence’s Academy of Drawing Arts and at the Compagnia del Disegno in Milano. That was the first of many solo and collective exhibitions in major private and public spaces, in Italy and abroad. 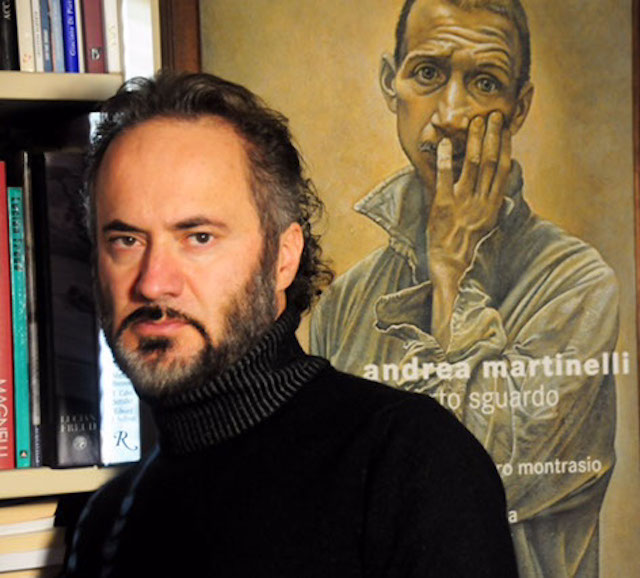 Among the solo exhibitions, the exhibit at the European Parliament in Strasbourg in 2001, the retrospective exhibition at the Frissiras Museum of Athens in 2002, the exhibition at the Permanente Museum in Milano in 2005 and the retrospective exhibition at the Panorama Museum of Bad Frankenhausen, Germany, in 2006. In 1999, he took part in the 13th Rome Quadriennale and, in 2003, in the 50th Venice Biennale. Among his many recognitions and prizes: 1997 37th Suzzara Prize  1999 The Chamber of Deputies Prize, 13th Rome Quadriennale  2001 35th International “Le Muse” Prize, Florence.

He has been a member of Florence’s Academy of Drawing Arts since 2004. He currently lives and works with Stefania between Prato and the Chianti area.