Jonny Briggs combines photography, performance, and sculpture to explore issues around childhood and identity. Archival family portraits trigger his entry into a complex and painful past, breaking apart rigid structures and conventions to create space for new perspectives. I talked to him about some of the twenty works in his current show at Kristin Hjellegjerde’s London Bridge space, which features many ingenious means of suggesting psychological states through the forms of presentation.

How would you describe your work as a whole?

I look at the constructed reality of the family through the constructed reality of photography. I’ve felt personal resistance to the medium of photography, and restricted within the requirements of the family photograph, of having to perform in it in a particular way. I’ve found that dishonest, and rebelled against it in the work. I’ve noticed that the more works I make, the more they start to feel like clues.

To the back story, or the past, or the patterns which recur in the work as a whole once I look back across it. I’ve found one recurring theme is confinement and restriction. That used to take place within the image, but now I’ve found the presentation and framing can achieve it.

Is that your ear at the exhibition entrance?

Yes! I made this on a residency at a glass lab in Stroud. It took hundreds of attempts – there were fleets of failed ears. It’s frosted glass, sand-blasted to create blur. I cast my ear in alginate, made a plaster positive, made a silicon mould, cast that in wax, corrected that and filled in holes, then made it out of plaster, then cast it in glass from there. I nearly gave up! I call it ‘Window’ as it’s surveilling the space.  I like the precarity of it resting on just two nails, and think of the fragility of glass clashing with the hammer used to put it up. 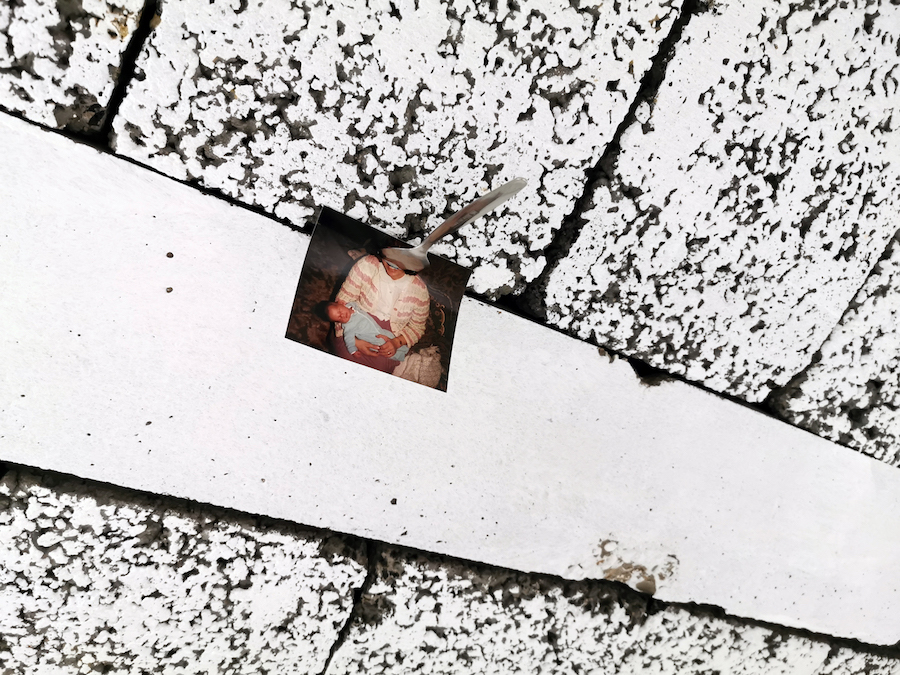 And what’s that up there?

That’s ‘Smile’: a teaspoon holds a photograph of my mother – holding me as a baby – to the ceiling. I like the thought that most people won’t spot it! The spoon follows the curve of my mother’s smile. It’s an object that helps us to provide for someone or be provided for, and I think of this connection between mother and baby through the mouth, and of the mouth as a site for both speaking and eating – but the spoon gags.  The breeze blocks are rather delicious looking. There’s no glue: I found a spot with a gap that would hold the spoon, and there was only this one place. 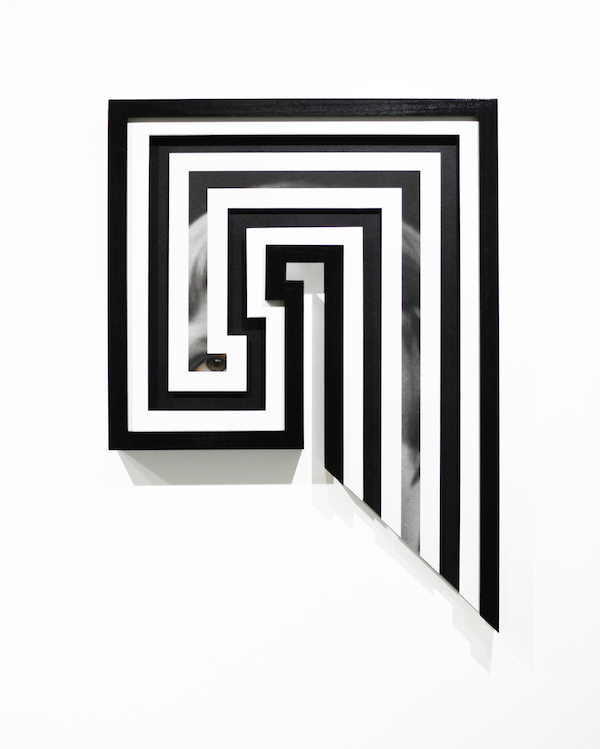 The ‘framing’, widely defined, seems to take up 90% of the work in the ‘Labyrinths’ and the oddly-shaped photographic image 10%. What’s going on there?

Reading from the outside you see a black frame, a white window mount, the black backing board, the white border around the photo (which is mounted on aluminium), all around the colour photograph of me holding up (and almost hidden by) a black and white photograph of my paternal grandmother – with the eyes cut out, through which you can see my eye.  Almost like an attempt to see through her eyes, or maybe there’s an aspect of considering my place within the family or even my place in the world. And all those hypnotic corners generate a sensory-questioning Op Art experience.

I can see why you reference a labyrinth!  What are you aiming to express?

My resistance to the frame comes from a childhood feeling of confinement in terms of gender, trying to find my place within the family and to live up to my father’s expectations. There’s something restrictive and formal about the aesthetics of the frames, something strict and rigid about their designs, with frames within frames within dead ends and mazes. I also think of the pinstripes of a formal suit, of restrictions I felt when I was younger, of social systems I felt confined within, and within the family the expectations of what a boy should be or do. The discovery of my sexuality had an aspect of learning to hide to survive – when it’s safe to show yourself, when on the other hand you should camouflage yourself. So hiding and the gaze runs through the work. In some works I cut into the frames to liberate the content, to disrupt the formality. And sometimes it’s as if the family photograph is being role-reversed. 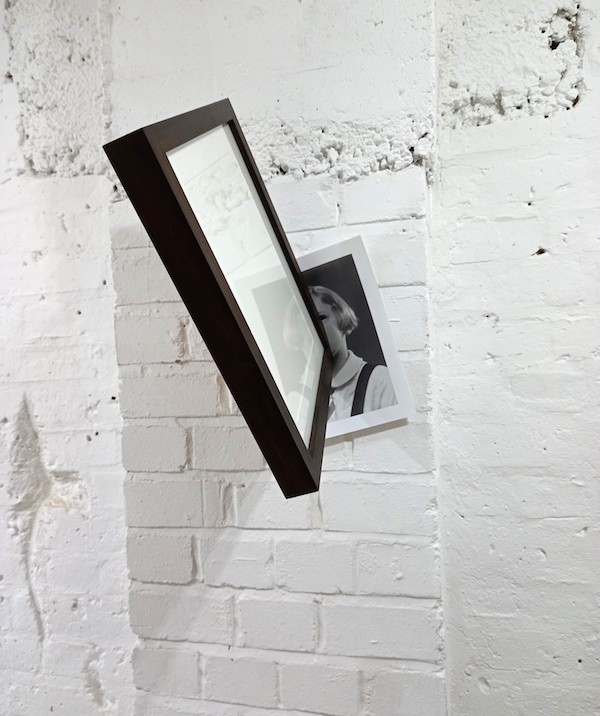 This is my paternal grandma, it’s a frame large enough to hold the image that holds the image to the wall.

So the frame is doing its job, but by an unusual means. Presumably it doesn’t actually penetrate the wall?

That’s for the viewer to decide. I love not knowing how something is done. And I love how often that’s a question in photography – what’s real, what’s not? That takes me back to how I felt as a child, not knowing what’s real and what’s not, like a magician’s trick. It’s as if it’s just been thrown. And I like how the glass reflects the other side of the head from some angles. Maybe there’s also an aspect of Pinocchio. And the mouth, again, is gagged. 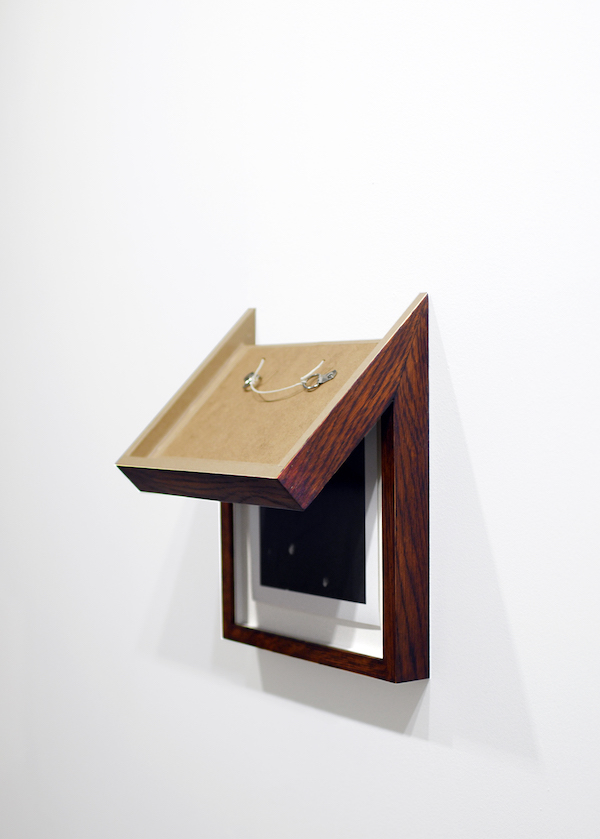 I hope it looks casual, but then you see how fully it’s engineered. It’s important to me that it’s very precise and considered and sort of restricted. I wanted to encourage peeping up and around to see the image of my paternal grandad. The frame almost dipping its head feels anthropomorphised, as if it’s encountering shame, and I think of those expectations that my dad and granddad tried to fulfil, and that I couldn’t. So maybe this is asking where trauma comes from – have I inherited a susceptibility?

There is a certain violence in the show. Does that suggest the trauma, too?

I don’t feel like a violent person, but it is in the work, yes – a lot of cutting, pinning and restricting. I’ve been thinking of the monstrous, of the departure of the human form. Sometimes I identify with the monster as an outcast not accepted in the social group. I feel embraced in the art world and can express myself safely as a liberated monster, but what I’m making now still derives heavily from the challenges of my younger years – an attempt to work through my suffering, surrounding my relationship with my father, and silenced queer past. Now is the purge. I was terribly well behaved at school, but now I have the opportunity to rebel!