Kelly Grovier is a poet and art historian who is keen to provoke debate about the images that punctuate our lives. His bestselling book 100 Works of Art That Will Define Our Age (Thames & Hudson, 2016) dared to assert which works of art created since 1989 will be regarded by future generations as decisive in the story of contemporary culture. Trained as a literary scholar, Grovier published widely on the philosophical influences that shaped the English Romantic poets, especially William Wordsworth and John Keats, before refocusing his attention on the visual arts.

His new book with Thames & Hudson, A New Way of Seeing: The History of Art in 57 Works, is no less provocative than his earlier title. It aims to uncover in 57 of the most famous images in world culture — from the Terracotta Army of the First Qin Emperor to Warhol’s Brillo Boxes — a key detail that has largely been overlooked by critics — one that alters substantially how we understand each of these masterpieces. By doing so, Grovier seeks to understand better “what makes great art great”. 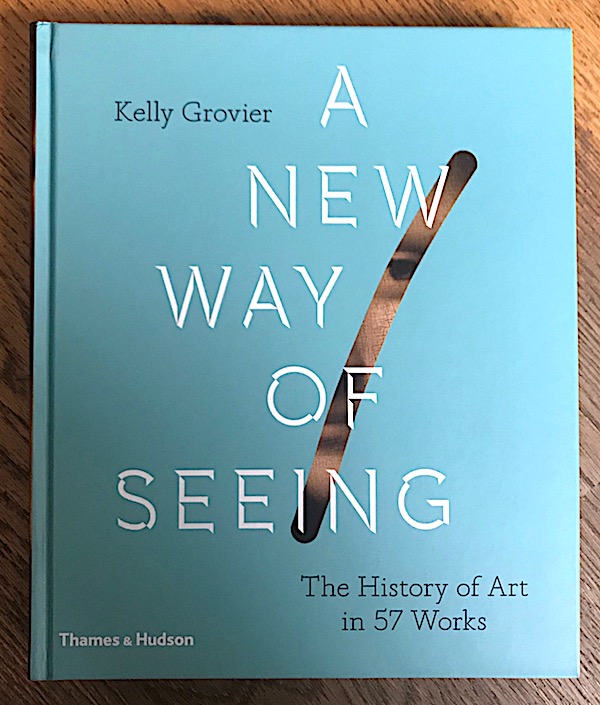 A New Way of Seeing: The History of Art in 57 Works by Kelly Grovier published by Thames & Hudson

SF: This is your third book for Thames and Hudson after 100 Works of Art That Will Define Our Age and Art Since 1989.  Can you give us a synopsis of your latest book A New Way Of Seeing – The History of Art in 57 Works?

KG: A New Way Of Seeing is fascinated by those works of art that have become so famous, so much a part of who we are, we no longer really look at them. The Mona Lisa. Girl with a pearl earring. The Scream. American Gothic. Because we know them by heart, they’ve largely escaped our looking. So the book invites readers to comb more closely the surface of these revered works that have survived in cultural consciousness for generations, for centuries. As we do so, we soon discover that, in every case, these indisputable masterpieces are hardwired with a flourish of strangeness — often an under-appreciated or overlooked detail — that ignites the works from deep inside. From a perfect logarithmic spiral in a golden curl of windswept hair on the goddess’s shoulder in Botticelli’s Birth of Venus, to the Petri dishes of platelets that pulse on the frock of the young woman in Gustav Klimt’s The Kiss, the book takes, in turn, 57 of the most famous images in cultural history and isolates in each a key detail (or “eye-hook”) that, once spotted, alters the way we appreciate and connect with those works.

KG: Because my book is all about touches of strangeness, having the very unstrange and entirely predictable calibration of “100”, say, or even “50”, determine the limits of my enquiry would have cut against the broader claim of dislocation. What could be less round and default than the decidedly pointy 57? I’m not, of course, the first to be seduced by this number’s odd charm. HJ Heinz grabbed it out of thin air for classifying his ketchup and Warhol made sure those digits were permanently silkscreened onto our imagination. It’s also the number of channels that clog Bruce Springsteen’s TV with soul-numbing white noise in his song “57 Channels and Nothin’ On”. I decided to retune The Boss’s radio with 57 fresh frequencies, transmitting from another world.

SF: What were your criteria for selection?

KG: The most famous works in the history of art. Because I didn’t want to include more than one object from any artist, we could quibble with my choice of Van Eyck’s Ghent Altarpiece over his Arnolfini Wedding, or Picasso’s Guernica over his Les Demoiselles d’Avignon. But the list of 57 works — from the Ashurbanipal Hunting Lion reliefs to Frida Kahlo’s self-portraits, the Bayeux Tapestry to Rodin’s The Thinker — is intended to double as a credible (if inevitably contentious) list of the greatest works of art ever made, from ancient times to the present.

SF: The works are in collections as far apart as North America and Russia.  Did you travel to see the works in the flesh?  If not, do you think it’s important to see the actual work and not just a digital reproduction?

KG: The book is, in many respects, a diary of artistic travel and personal discovery. Several of the works that might otherwise have been difficult for me to reach were glimpsed on loan for exhibitions I was able to attend in the UK, Europe, or the States. I do believe that seeing the surface of an object unmediated by digital pixilation is far preferable to establishing an intimate connection with a work. However excellent published reproductions of a work may be, there is always some variance in the vividity and temperature of colour and in one’s sense of a thing’s materiality. Digitising inevitably degrades a work to a disposable sign, a pale electric ghost of its palpable self.

SF: What was the most illuminating discovery you made about a work of art while researching the book?

KG: Because I’m excited about so many of the new propositions I put forward in the book, I’ll seize on your word ‘illuminating’ to nominate just one. It’s long been suspected that a Peruvian mummy on display at the Paris Exposition likely influenced the facial expression of Edvard Munch’s yowling figure in The Scream. But given the artist’s fascination with electricity and his anxiety about the acceleration of technology, his imagination would likely have been susceptible too to the allure of another spectacle in the Exposition — a soaring sculpture of an outsized lightbulb filled with 13,000 smaller lamps, that rose above visitors in the pavillion. Like a bulging glass skull, as I say in the book, whose bulbous cranium tapers to an elongated jaw, the techy totem lamp towered above the Exposition. The shape appears to have seeped deep into Munch’s imagination. It flipped a switch. The howling head that glows in The Scream echoes with uncanny precision the crystalline contours of Edison’s futuristic god.

SF: Your final choice is Marina Abramovic.  Do you think, to quote Tom Wolfe, that art has reached ‘the vanishing point’?

KG: I think there is always a tendency to see the art being made in one’s own age as somehow the final chapter in humankind’s aesthetic story — the culmination of all that’s come before. But art never ends. It’s endlessly renewable and just when you think we’ve reached a point of diminishing returns, a Sean Scully or a Wolfgang Tillmans, turns a new page and blows the door open again. Arthur Danto’s speculations about the end of art, echoing Francis Fukuyama’s assertion that we’ve reached the end of history, are constantly being tested. The only way we’ll ever reach the end of art is when we know ourselves completely and there are no mysteries left to explore about what it means to be alive in the world. Only then will we stop staring into Marina’s eyes, stand up, and walk away from the table.

SF: It must have been very difficult to limit yourself to 57 works.  Is there a second volume in the pipeline?

The response to the book so far has been so gratifyingly positive, I’d love to look deeper into another bundle of masterpieces, perhaps by focusing more particularly on one era. Drawing a reader’s eye to an overlooked or underappreciated detail in a work as an aperture into a fresh new reading is an especially fruitful approach to accessing the profundities of busy images that befuddle, such as those created by the Surrealists. A more focused study on the key works that define the cluster of modernist -isms from Post-Impressionism to Abstract Expressionism would be exciting.

SF: Which Art Historians / critics have influenced your career?

KG: In addition to the usual suspects whose writing I love — Gombrich, Berger, Hughes, Danto, Lucie-Smith — I’ve always been enthralled by the observations and insights of poets who help us learn from art and not just about it. Where trained art historians are keen to locate a work in the unfolding story of culture, Keats and Rilke, Szymborska and Ashbery help situate works instead in the story of our lives. I’m far more likely to be moved by Yeats’s Lapis Lazuli than I am a scholarly account of the sculpture’s indebtedness and provenance.

SF: As well as a cultural critic and author, you are also a poet. Do you make a conscious choice in dividing your writing time?

KG: My broader literary aim has been to collapse, as best I can, the boundaries that separate one kind of articulation from another. I see the 57 separate texts that comprise the new book as prose poems. I consciously try not to change gears in the way I write. I regard my writing on art and my poetry as similarly striped beasts — species of the same genus.

SF: What projects do you have coming up in the future?

KG: At the moment, I’m turning my attention to the wonders of a single work: the ceiling frescoes of the Vatican’s Sistine Chapel. The book I’m developing now will explore how Michelangelo would have expected his miracle of imagination to be experienced as a multisensory installation — as much a marvel for the ear as for the eye.