Mali Morris is a popular and notably active member of the Royal Academy of Arts, making her an appropriate choice for the annual commission to make flags over Bond Street. She also has new paintings in the RA Summer Show, and a retrospective of her prints. In Sam Cornish’s words, her abstract paintings feature ‘opacities and translucencies overlaid and juxtaposed to create an image in which space moves through colour and colour through space’. I caught up with her just as the flags were being hung.

What was your response to the invitation to make flags for Bond Street?

At first I wasn’t sure if it was the right project for me. On the one hand, I liked the idea of making a celebratory work to invite interest in the Summer Exhibition, just around the corner. I was part of the team that selected and hung last year’s show, so I know how much hard work goes in to making it such a popular and enjoyable tradition, and felt it would be an honour to be involved again. On the other hand, my paintings develop out of a complex process, they’re definitely not ‘designed’. And I didn’t really want to just photographically reproduce a painting. But a few hours later it seemed more like an interesting challenge, and I decided I should have a go. 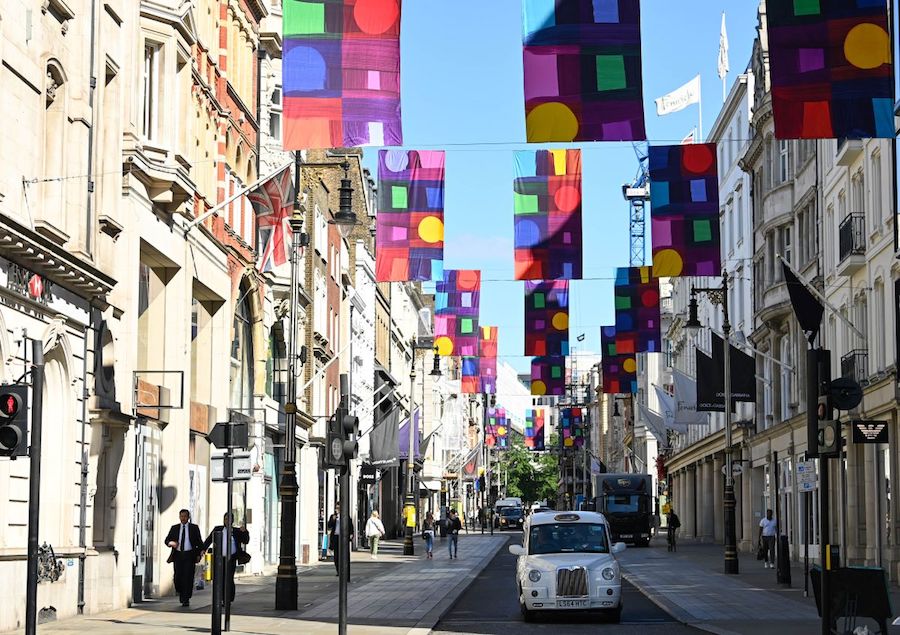 How did you tackle it?

I tried various formats, realising they needed to work visually on three flags across, moving down the street in 11 bands. I eventually revisited a structure I’d used in a series of paintings called ‘Ashbery’. They have a loose, dark lattice brushed directly over a patchwork of bright colour; two or three circular forms are then cleared when the dark paint is still wet, revealing random accents of yellows, reds, and blues. The print show at the RA includes two related prints, ‘Staith’ and ‘Bridge’. I hoped the lattice would read across the three flags as a graphic visual link and the bright circles would bounce around down the street, with a randomly varied order across the three flags keeping things lively.

Were you seeking effects similar to those in your paintings?

As it turned out, yes. I’m always preoccupied in painting with how colour relationships can create luminosity, which in turn creates pictorial space – not illusionist space, but an alive and moving space. I enjoy getting lost in paintings, of any style and period, as the eye meanders around and in and out – not unlike moving through the world, but as an experience, not an illustration. I made designs at 1/10 scale because that is familiar to me, and got excited when Matt Hunt (the designer at the Royal Academy) showed me the computer mock-up he’d made of how they might look in situ. That’s when I realised that the flags might operate as active images in real space, in the ever changing light of day – that the properties I look for in my paintings might explode outwards, as it were.

How do you go about titling works?

The titles come after the works have been made. They aren’t to do with the meaning of the paintings, but they have to have a ring to them which suits the painting.

Presumably the ‘Ashbery’ series is named for the American poet John Ashbery (1927-2017)? 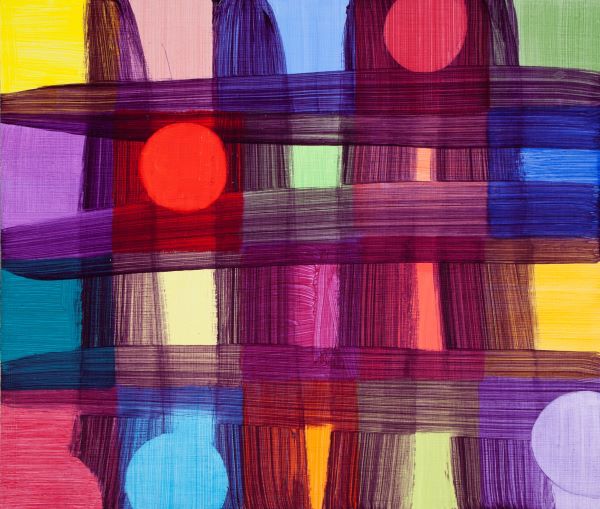 Yes, I love his work; I was reading Ben Lerner’s 2011 novel Leaving the Atocha Station, in which he describes Ashbery as ‘compelling us to attend to our attention, making us conscious of our reading as we read’. That seemed completely in tune with how you find out more about a painting as you go. 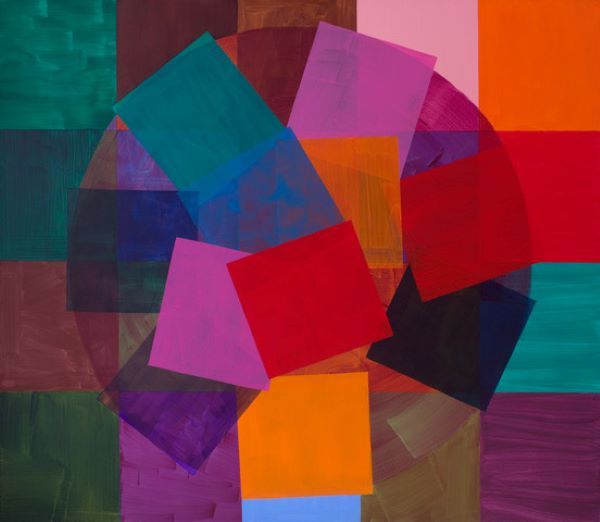 You also have new paintings in the RA summer show, the biggest being ‘Impeller’. How do you make this type of work?

I start out with what I call a checkerboard, on which I put down colours that advance and recede, and apply the paint in a variety of ways – using different size brushes, for example. When that is totally dry, a circle goes on. The degree of transparency in that colour is absolutely crucial as I need the checkerboard colours to come through enough, but not too much. And that circle has to be done in one shot because the colour is in the medium, which shows the brush marks. So that has to be a very fast process following on from the slow process of making the checkerboard patchwork. Once the circle is dry, I put the rectangles on: they need to relate to both the checkerboard and the transparent circle.  All that juggling across chromatic and tonal and spatial shifts is done by eye, intuitively, without a system.

Where does that all take place?

I work on the large paintings on the floor, and it can be a difficult stretch to reach the centre. It’s quite an athletic activity – I sometimes have to rig up a makeshift plank to walk along!

‘Impeller’ is quite close to the language of the flags, as are some of the prints at the RA, but how did you arrive at the rather different-looking ‘Tipitina’?

A rectangle of white was printed onto the ivory coloured paper, before anything else went down. It’s barely noticeable at first, but vital to the way the image works. Toussaint I – IV and Mardi Gras are similar, the most graphic prints I’ve come up with so far. The key was to find ways for the dots/circles to animate the white space, to make it swing and twist, so that I was constructing pictorial space rather than a flat design. I made very many works in paint on paper to explore this, before I found what I wanted to see. As for the title, ‘Tipitina’ seemed to fit the sensation of ‘tipping/touching’ along a horizontal spread – it’s a song written by the legendary Professor Longhair (who also composed ‘Mardi Gras in New Orleans’). I made this series, and others, with Master Printer Kip Gresham, and Alan Grabham, in Cambridge. We all liked the song when we played Allen Toussaint’s version on our phones when the work was done.

Talking of songs, I hear you are a Dylan fan?

Yes – and I heard him go electric on 21 May 1966 when I was a 21 year old student in Newcastle – the night after ‘Judas’ was infamously called out in Manchester!

Mali Morris’s flags can be seen on Bond Street to 31 July 2022. The Royal Academy Summer Exhibition 2022 runs to 21 August. Mali Morris’ prints are in The Sir Hugh Casson Room, Royal Academy (open to all to look) to 15 August 2022.