Marc Quinn: Alison Lapper Pregnant 2005: From gym ads to dating apps, from T.V. programmes on plastic surgery to how to look ten years younger, our contemporary obsession with the body beautiful is one that many ancient Greeks would recognise.

The idealised body found in Greek sculpture of the fifth century B.C. has been the most copied and influential artistic style in the west. Physical beauty for the Greeks was prized by both mortals and gods. At times it was difficult to distinguish between the secular and the sacred. Nakedness was seen as heroic, in contrast to the Judaic-Christian attitudes of shame and sin. The athletic male body with its rippling muscles and smooth boyish skin became the Apollonian ideal – the yardstick by which we have measured health and beauty for centuries. This stood in contrast to such pre-classical images as Minoan goddesses with their exposed breasts and serpent wands, or the Venus of Willendorf from the Upper Palaeolithic period, a small figurine with wide hips and no arms that represented chthonic female fecundity rather than honed masculinity. 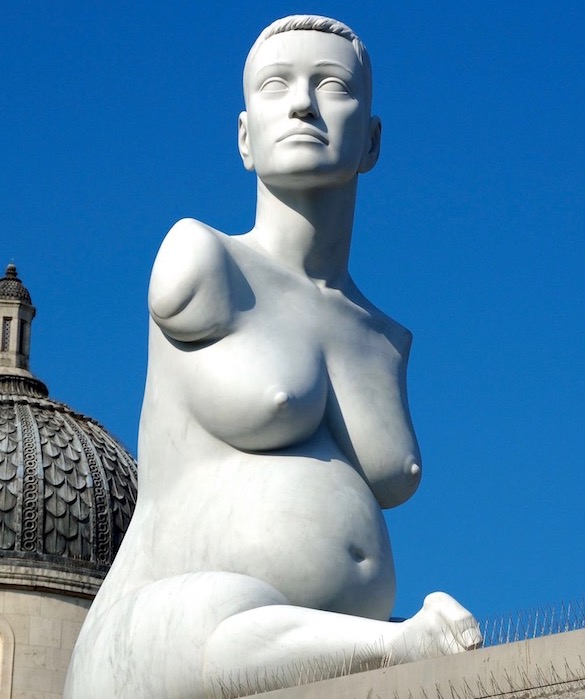 Move forward a handful of centuries to the site around Trafalgar Square. Since the 1200s it has been an important London landmark. The present square, named after the British victory against the Spanish and the dastardly French on 21st October, off the Cape of Trafalgar, encompasses what was once the courtyard of the King’s Mews. After George IV moved these to Buckingham Palace, the area was redeveloped by John Nash. Around the central Nelson’s Column are four bronze lions by Landseer that speak, along with the surrounding buildings – Canada House and South Africa House, the church of St Martin in the Fields and The National Gallery – of British Imperial self-confidence Over the years the square has become synonymous with both New Year’s Eve gatherings and political demonstrations from the first Aldermaston march, to the poll-tax and anti-Brexit protests.

In each corner of the square is a plinth. On the southern two are statues of Henry Havelock – a Major General associated with the Indian Rebellion of 1857 and Charles James Napier – Commander-in-Chief of India 1839-40. The larger northern plinths, designed to hold equestrian statues, bear one of George IV, but the money ran out before the planned statue of William IV could be built on the fourth designed by Sir Charles Barry in 1841, that sits in the northwest corner.

In 2005 the Mayor of London, under the guidance of the Fourth Plinth Commissioning Group, commissioned the artist Marc Quinn to make a contemporary sculpture to fill the space. It was an inspired choice. There, in the heartlands of classical and imperial power, Quinn placed a torso of his friend, the artist Alison Lapper. Born with phocomelia (no arms and shortened legs). Quinn’s bold 13-ton sculpture, carved from a single twelve-foot hunk of Carrara marble depicting Lapper eight months pregnant, challenged received ideas of classical beauty and establishment power. Questioned what it means to place a sculpture on a plinth to tower above the populace and who it is we decide to honour.

Marble has traditionally been associated with mythical heroes and gods, Michelangelo’s David, or the statue of Abraham Lincoln. The pregnant, armless Lappin stood proudly as a metaphor for our times, a powerful contemporary Venus de Milo, whose broken beauty brought her dignified disabilities centre stage. Lappin stood not just as herself, but as a metaphor for all those who have combated often hidden difficulties. Here was someone who had overcome enormous obstacles – she gained a first-class degree in fine art from Brighton University and an MBE – along with societal prejudice to sit among this plethora of male leaders: Amazonian, vulnerable, female and pregnant. There, among the selfie-taking tourists and the ubiquitous pigeons, Quinn gave us a different kind of heroism, an image of the struggle to deal with whatever life throws up. Later, in the form of a large-scale inflatable, the work would become the centrepiece for the 2012 Paralympics opening ceremony.

Always controversial (think of his recent Bristol sculpture of the Black Lives Matter Jen Reid raising her fist in a gesture associated with the civil rights movement of the 1960s that was almost immediately removed ) there were those that criticised Quinn for being an opportunist. An able-bodied artist who was making work about someone with disabilities. Lapper also had misgivings. Although she thinks the piece was fantastic, she’s said it would have been more remarkable if it had been a work by her that had been put on that plinth. At the time, despite being out of art school for 11 years, she had sold virtually nothing, while Quin was going from strength to strength.

So can art influence social attitudes? Perhaps. But nothing is black and white. The work no doubt, raised the visibility of those with disabilities and led to renewed debate. Would we have had Paralympians appearing on mainstream Strictly Come Dancing or acting as T.V. presenters before this? Yet another tragic truth is that Lapper’s son Paris – the child with whom she was pregnant on the plinth – was taunted and bullied throughout his childhood about his mother’s disabilities. Suffering with depression and anxiety, he was found dead in a hotel in Worthing, West Sussex, after a drug overdose. Art, it seems, can only change so much. Sadly, it did not manage to convince one young boy that the lives of both him and his mother were uniquely valuable.