‘It seems obvious,’ writes Robert Fleck in Marie Raymond/Yves Klein, ‘that we will not understand the extent of Yves Klein’s adventure and his extraordinary explosive energy if we are not also interested in the painting of Marie Raymond, his mother.’

This is for two main reasons. The first is Marie Raymond’s position and connections within the art world of her day; the focus of the current exhibition at Musée de Tessé, Le Mans, At the heart of abstraction: Marie Raymond and her friends. The second is their shared interest in Rosicrucianism set within the context of Roman Catholic faith. 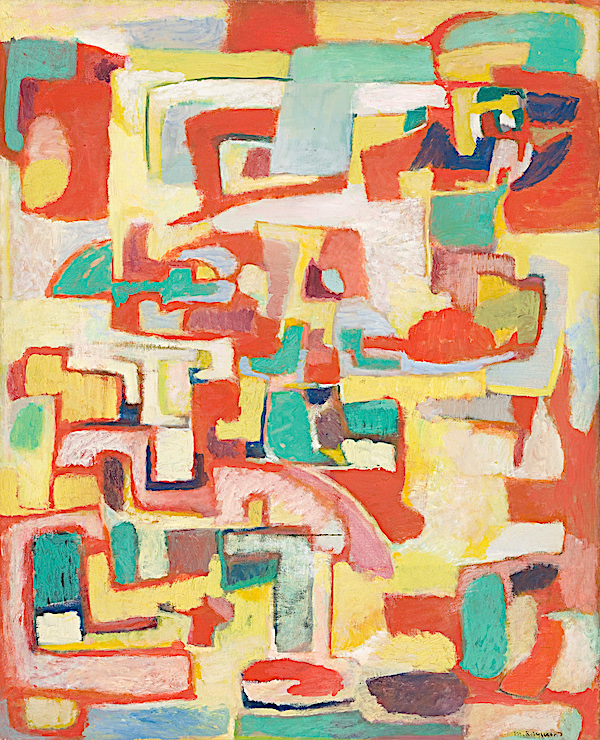 A renowned artist and a prominent figure in the Paris art scene, Raymond was a leading female exponent of Abstraction Lyrique, a new vein of abstract painting, along with Vieira da Silva. She showed alongside Pierre Soulages, Hans Hartung, and Serge Poliakoff and was friends with Nicolas de Staël. Her work was exhibited at the Galerie Colette Allendy in 1949 alongside Jean Deyrolle, Émile Gilioli, Soulages and Hartung. At the heart of abstraction: Marie Raymond and her friends examine her work alongside the works of her artist friends, who shared the same innovative vision of abstract painting. The exhibition features landmark works by Soulages, Hartung, Gérard Schneider, Jean Dewasne, César Domela, Youla Chapoval, Camille Bryen and de Staël.

In addition to her activities as a painter, from 1946 to 1954, Marie Raymond gathered artist friends and figures from the French and European art world every Monday in her small apartment and studio on Rue d’Assas in Paris. The weekly Lundis de Marie Raymond (“Marie Raymond’s Mondays”) formed an essential meeting point and platform for exchange in the postwar Parisian scene her painter friends, artists, art critics, gallery owners, photographers, writers, museum directors and collectors. They brought together the painters Hartung, Schneider, Soulages and Doméla, the art critics Charles Estienne, Georges Boudaille and Pierre Restany, as well as gallery owners Colette Allendy and Iris Clert, collectors, such as Gildas Fardel, and museum directors, such as Willem Sandberg. A decisive role in the new forms of artistic creation practised by these artists was played by art critics, gallery owners, and collectors such as Fardel, Estienne, Boudaille and Restany.

As Yves Klein’s mother, Raymond also welcomed her son’s young friends—César, Jacques Villeglé, Jean Tinguely, Raymond Hains—to her Monday receptions, where they presented some of their works. Attentive to their artistic endeavours, she supported them by enabling two generations of artists—both of whom played a significant role in the history of art in the 20th century—to meet and interact. She provided the younger artists with the opportunity to discover their predecessors’ paintings, against the background of which they went on to make their own stand artistically and developed the fundamental principles of their art while questioning the principles of abstract art. The Nouveau Réalisme group, which was formed in the early 1960s by Klein and his friends, was conceived by Pierre Restany, one of Raymond’s regular guests. As such, this exhibition also represents an opportunity to view early works by Klein, Villeglé, Hains, César and Tinguely.

Following the French Revolution, France became fertile soil for occultism and esoteric beliefs, while Catholicism also experienced renewal from the turn of the nineteenth century onwards. Amongst these tendencies was Rosicrucianism, an esoteric variant of the Catholic faith, which was promulgated by Max Heindel and his essay ‘The Rosicrucian Cosmo-Conception’ or ‘Mystic Christianity’. It fused medieval legends around Christian Rosencreutz with Catholic doctrines and called for a reformation of humanity through a reconnection with the spiritual realm. Raymond and Klein were followers of Rosicrucianism. Raymond was well versed in esoteric literature and often shared respective books and essays with Klein. She was also an early yoga practitioner, having been introduced to Eastern spirituality and meditation and breathing techniques by her brother-in-law.

Raymond intended her abstract compositions, full of metaphysical iconographies, as windows to the spiritual world and hoped her vibrant gestural abstract compositions would help the viewer transcend the material world. She saw colour as the key to pure sensation, saying, ‘Colour, the symbol of life, must achieve maximum expression,’ and believed it was necessary to integrate it into a space in which the mind was able to enter and transcend the material. So, for Raymond, the canvas itself could not be the primary focus as it was necessary to create this cerebral space within the picture. She spoke of how she had come to this realisation: ‘I could feel this scattered life, which had to be pieced together as a whole, to express the inner states which, for me, contained the gifts of the Impressionists: the light of the south—Hope. For me, it was that, and an impulse that pushed me to express it. All these scattered harmonies, I had to bring them into the light.’ [i]

In 1957, the Catholic art critic Pierre Restany, who called Raymond the ‘Organist of Light,’ wrote about the sacred nature of her use of light: ‘The universe of Marie Raymond retraces the beautiful story of light and its myriad of games through a diffuse space, a sacred place of this complete saturation. Here, the trajectories of the sun’s rays—sometimes direct, sometimes grouped in contradictory nebulae—create the dynamic elements of a subtle meridian atmosphere where the scattered memories of ancient natural structures come together and merge. … The journey on which Marie Raymond invites us—in an elevated atmosphere, in the full warmth of her light hues—is steeped with an infinite number of sparkling encounters, where the Berthe Morisot of abstract painting succeeds in bestowing chromatic bursts with that delicate, full touch, that distinctive accent. Her work, imbued with the serene joy of spring mornings, has managed to capture the flavour of a melodious secret ….’ [ii]

Klein wrote that: ‘Lines, bars of a psychological prison … are our chains … They are our heredity, our education, our framework, our vices, our aspirations, our qualities, our wiles … colour, on the other hand, is free; it is instantly dissolved in space … And that is why, in my work, I refuse more and more emphatically the illusion of personality, the transient psychology of the linear, the formal, the structural. Evidently, the subject I am travelling toward is space, pure Spirit … By saturating myself with the eternal, limitless sensitivity of space, I return to Eden …’ [iii]

Thomas McEvilley has explained how these statements reflect aspects of Heindel’s theosophical cosmology in which: ‘Spirit (or Life) is identical with Space. It is represented by colour (which, as Klein wrote, is “free” because “it is instantly dissolved in space”), but especially by the colour blue; it is infinite expansiveness with no internal divisions to affront its wholeness. Space/Spirit/Life permeates and contains all transient forms, thereby negating their apparent differences and boundaries. Human evolution, according to Heindel, is approaching the end of the age of form and solid matter and soon will reimmerse itself in an age of Space/Spirit/Life that will restore the condition of Eden. This transition will involve the erasure of all boundaries, both outer (political, national, occupational) and inner (“our heredity . . . education . . . framework . . . vices . . . aspirations . . . qualities . . . wiles”). Accordingly, the Age of Space/Spirit will be a return from the entanglements of lines to the openness of colour, and especially of the Eden/spiritual colour: Blue.’ [iv]

Sarah M. Bartlett notes that ‘Heindel had written that art could become a form of magic, and claimed that the artist could take on the role of messiah to teach others’ [v] while McEvilley writes that Klein’ saw himself at the turning point of two epochs—the “Messenger” of the incoming age, as his close friend Jean Tinguely put it.’ [vi]

Klein’s untimely death in 1962 put an end to such ambitions and added to the difficulties faced by Raymond following her divorce a year earlier. She essentially withdrew from the Parisian art scene to work on a new series of large-format paintings and collages. Inspired by her passion for the Cosmos, these works resembled imaginary visions pitched between dreams and reality that went beyond representations of the effects of light. She never stopped exploring the cosmic power of colour. Like Klein, she sought ‘To bring a world into being’ recognising that “‘The night is not the night’, because there will be dawn, hope.” [vii]

At the heart of abstraction: Marie Raymond and her friends, Musée de Tessé, Le Mans, France, from April 10 to September 19. 2021 – Works by Marie Raymond can also be seen in Spirituality & Abstraction in post-war Europe, Hanina Fine Art, 21 Apr – 31 Jul.