Plus ca change, plus c’est le meme chose, the homily goes. Yet, Marlene Dumas’ portraits of the writer Oscar Wilde (1854–1900) and his young lover, Lord Alfred Douglas (1870–1945), known as ‘Bosie’, illustrate that social attitudes do change that images can, over time, take on a different resonance. Based on original nineteenth-century photographs, Dumas’s dual portraits were first shown as part of Inside: Artists and Writers in Reading Prison, 2016 – an installation developed by Artangel to respond to Wilde’s punitive incarceration for his affair with the callow young socialite, Douglas, and the 50th anniversary of the decriminalisation of male homosexuality.

Born on the outskirts of Cape Town and educated at an Afrikaans-speaking school, before going to an English speaking university, Dumas admits that she’d never sat with a person of colour in the same class, never had dinner with a Jewish or Muslim family, but as a student started to read the poet Allen Ginsberg and the critic Lucy Lippard and decided that making art was all about asking questions. She never paints from life, but her psychologically nuanced paintings and drawings explore identity, gender, race and sexuality. At times controversial and hard-hitting, there’s a sensual urgency to her work that touches on death and guilt, the transgressive and the profane and investigates how painting transforms a given image. Her portraits of Wilde and Douglas are stark reminders of the conflict and hypocrisy that existed between public and private realms in the Victorian era. Reputation and respectability were all, and life a perpetual game of snakes and ladders where reputations could be lost in a flash. Status was paramount. Yet behind a tightly regulated social veil lay the murky world of child prostitution, wife-beating and rent boys, where blackmail could easily exploit the rift between public constructs and personal behaviour. 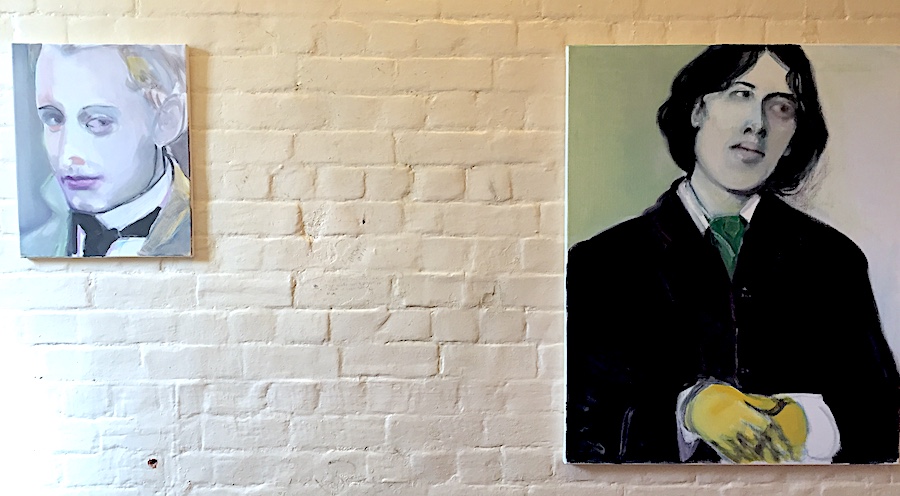 Oscar Wilde was one of the most famous figures of his generation, known for his glittering literary talent, his foppish sense of style – think blue carnations – and his razor-sharp wit. The epitome of a modern celebrity before such a concept was even born. He’d had his fair share of tragedies: the loss of his beloved sister Isola when he was just 12 years old, the defection of his first love, Florence Balcombe, to his rival, Bram Stoker, the author of Dracula. But his seemingly happy marriage to Constance Lloyd and his loving relationship with his children – for whom he wrote some of the most spellbinding children’s stories in English literature – allowed him to keep his homosexuality under wraps. Then he met the mercurial Bosie and they became lovers. It was an obsessive, self-destructive relationship. Bosie introduced Wilde to a world of gay prostitutes and glittering parties. Bosie’s father, the Marquess of Queensberry, a deeply conservative, vicious man, blamed Wilde for the gossip surrounding his son. When he publicly accused Wilde of being a homosexual — illegal at that time in England — Wilde, encouraged by Bosie, chose to fight the charges instead of fleeing abroad to the more sexually enlightened France. A psychopath, the Marquess condemned his family to unmitigated misery, bulling Alfred and describing his other son Percy, as a ‘sicked-up looking creature…swathed in irons to hold him together it used to make me sick to look at him and think that he could be called my son.’

While Wilde was serving his sentence in Reading prison, Bosie failed to keep in contact, just as he had failed to defend him in the dock. A spoilt narcissist, he carried traits of the family’s genetic instability. Wilde suffered terribly from the harsh physical conditions and emotional isolation. However, an unusually enlightened prison governor thought writing might be more cathartic than hard labour and allowed him to write to Bosie “for medicinal purposes”. Though not permitted to send the letter, each page was taken away as it was completed and only returned to Wilde on his release on 18 May 1897. An indictment of Bosie’s vanity and his own weakness, De Profundis charts his spiritual growth during those dark prison days when he allied himself with Christ, whom he saw as a heroic, romantic artist. The result is one of the great works of prison literature.

Broke and lonely, after his release, Wilde lived in a series of cheap hotels in the Hôtel d’Alsace in the 6th arrondissement in Paris. An ear infection that had troubled him for years appears to have flared up and his last days were probably spent in terrible agony. Buried in a pauper’s grave in southwest Paris, his remains were later moved to Père Lachaise. It was a tragic end for a man of such wit and glittering bravura. Wilde wasn’t just a great writer of plays, stories and profound moral tales – but also an amazing dinner guest, a raconteur sought after for his company and frequent witticisms. An aesthete, he believed that art existed for its own sake. That beauty was its own purpose.

In Dumas’s paintings, Bosie’s calculated look stands in contrast to Wilde’s dreamy poetic gaze that emphasises not only his creativity but his vulnerability. More usually known for her paintings of women in various degrees of physical exposure that reveal the psychological landscape beneath the surface of her subjects, Dumas, here, shows a dissolute, immature man prepared to destroy his lover for his own self-indulgent ends. The two paintings, hung side by side, unpack notions of complicity and victimhood, whilst seeming to suggest that in a more enlightened age Wilde could simply have been himself, celebrated for being the great writer he was, a lover of both men and women. 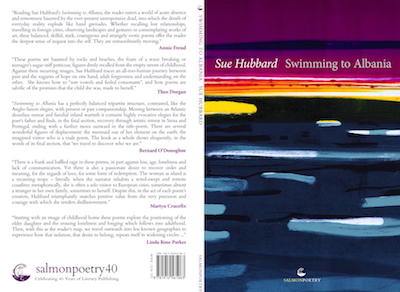 She Hubbard’s latest novel Rainsongs is published by Duckworth. Her new poetry collection, Swimming to Albania can be ordered from www.salmonpoetry.com . Her fourth novel is due from Pushkin Press in 2023.