When I landed in Mexico City to attend the Artweek earlier in February, I was not sure what to expect. Apparently, for the past few years, the metropolis has been gaining serious momentum amongst Art lovers and collectors for both its cultural heritage and local art scene. Some even called it the new “Berlin”.

The city itself is incredible. Walking through the districts of Polanco, Condensa and in particular, Roma, which seemed so familiar after watching the Alfonso Cuarón film, is such a delight. There is a European feel to Mexico city, a real foodie paradise with a vibrant art scene. The Art week started with the galleries night. Galeria OMR showcased the work of Yann Gerstberger. The French artist creates tapestries made from household items and anthropomorphic sculptural figures using hand-dyed mop yarns, which imitate how digital images can appear blurred and pixelated. His work is both figurative and abstract. His imageries are taken from Surrealism, Nigerian folk art, graffiti, and the Internet.

Founded in 1999 by husband and wife duo Mónica Manzutto and José Kuri, Galeria Kurimanzutto is an institution in Mexico city with a prestigious stable of star artists such as Damian Ortega, Gabriel Orozco, Jimmie Durham, and Rikrit Tiravanija, to name but a few. The current exhibition is from Mexican artist Abraham Cruzvillegas. Pending Sculptures is the latest in his series of ongoing installations in which he incorporates natural life to express his preoccupation with origin, sociability, and resilience. The work is a hanging garden of sculptures at the crossroads of identity, collaboration and material re-appropriation.
After the opening of his exhibition at Blain Southern in London early February, Bosco Sodi opened another show at Galeria Hilario Galguera in Mexico City. Bringing together 22 thoughtful and textural pieces, this exhibition includes works on canvas and clay sculptures that were inspired by Sodi’s period of mourning and reflection following the death of his grandmother. The body of work explores the duality that is intrinsic to human life, including the relationship between light and darkness, joy and sadness, youth and old age, and positive and negative. 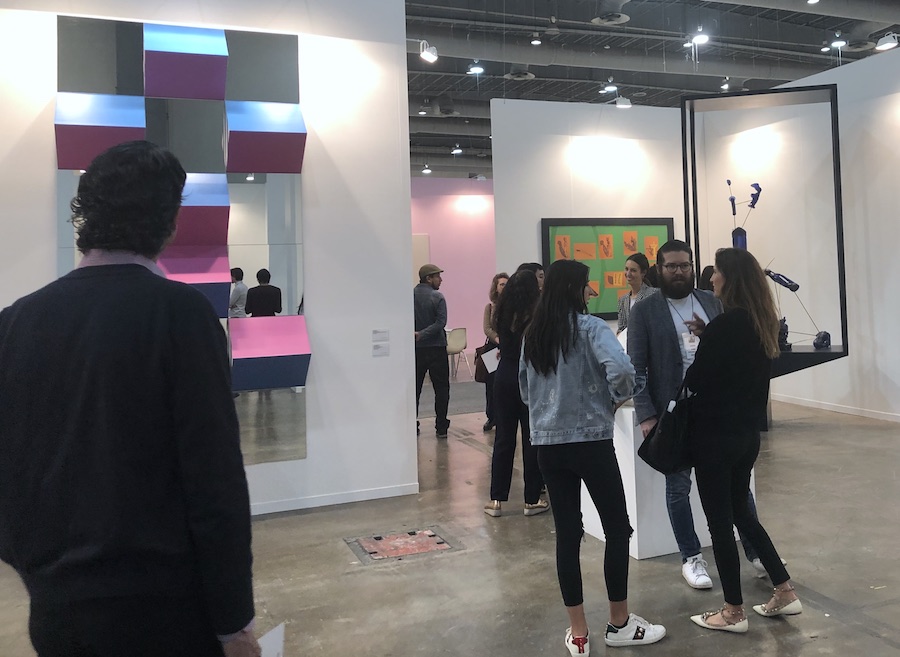 The VIP opening of Zona Maco’s 16th edition at the Centro Citibanamex convention centre was well attended. It is by far Latin America’s largest and most distinguished fair. Yet, the number of galleries, over 70 of them, is small enough to keep a “salon” feel to it, as opposed to the gigantic fairs of Europe and Miami. It makes the whole fair experience very pleasant, and fairgoers obviously enjoyed it. Collectors were from the region, including North America, with some international collectors eager to discover the Mexican art scene.

There was a good contingent of major International galleries such as Almine Rech, Perrotin, Pace, Continua as well as American (both North and South) galleries.
I enjoyed Olga do Amaral’s tactile works at La Cometa’s booth – the Bogotá gallery regularly exhibits the most recognised Latin American artists. 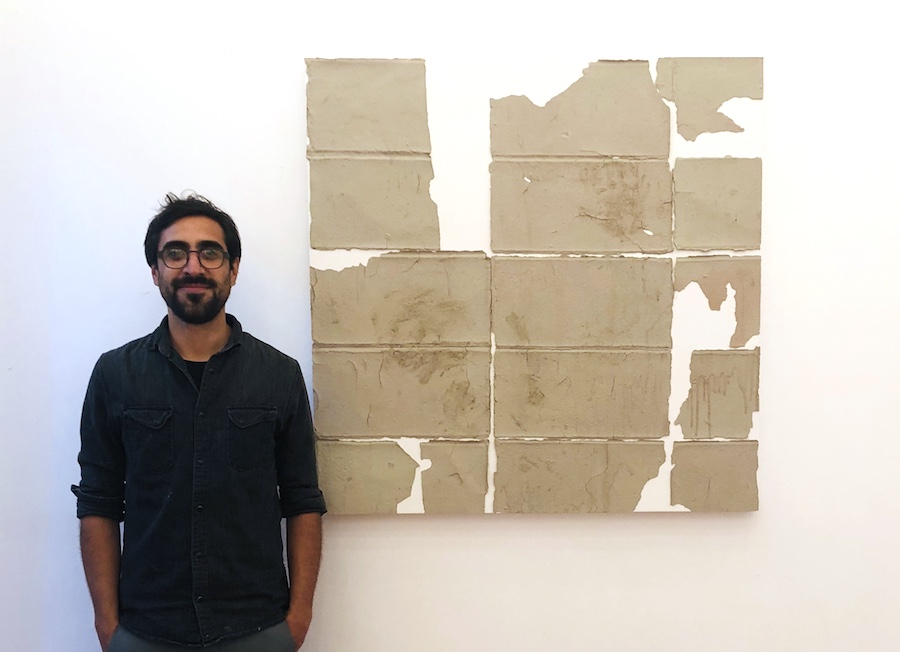 Steve Turner’s gallery from LA presented the works of Pablo Rasgado. I visited Pablo’s studio the day before the fair and was wholly taken by his abstract monochrome works. Pablo’s work is utterly subtle and bears the trace of architecture, a subject that he is passionate about. Like a contemporary archaeologist, he “extracts physical segments of facades, preserving and presenting a range of indexical traces”. One of his works is the extraction of the print of the face and hand of a young man arrested by the police he witnessed one night in LA.

At Gallery Juan Silio from Santander, I discovered Rafa Camaron, a young Spanish artist, with a fluid, fresh and humorous style. 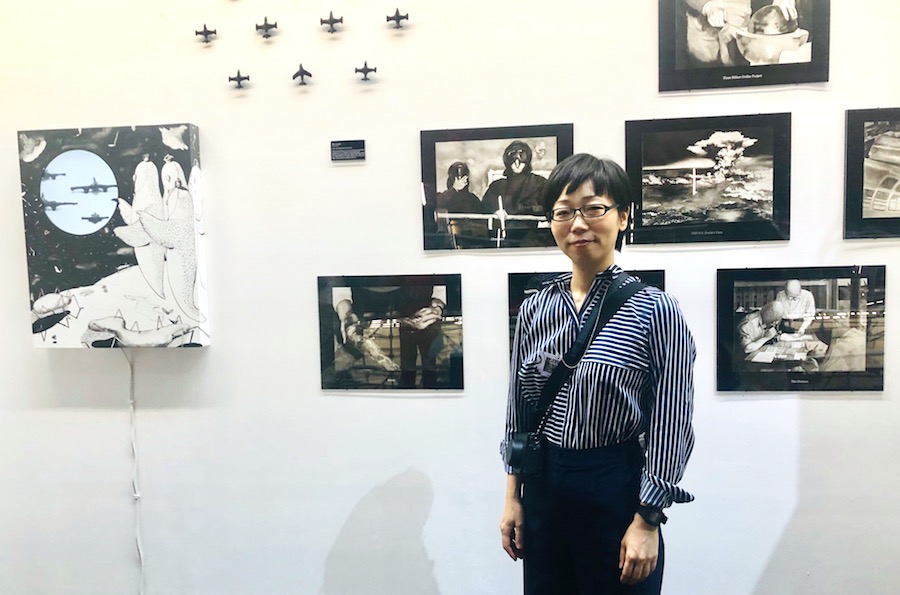 I really enjoyed Material Art Fair which is in its sixth year and has firmly cemented its place on the global art calendar of “must-see” fairs. With 73 galerías, Material was convivial, energetic and fun, with booths stacked in a compact “jungle-gym” of scaffolding. I met the Japanese artist Gaku Tsutaja at Ulterior Gallery whose narrative body of work (video, sculptures and drawings) recounts the post-World War II history of Enola Gay, the Boeing B-29 Superfortress bomber that dropped the atomic bomb “Little Boy” on the city of Hiroshima in 1945. The artist addresses the issue of how history is constructed and presented. She offers, through a narrative and her work, another view, a Japanese perspective of this traumatic historical moment.

The other satellite fair was the edgy Salon Acme. The location, an old palace not fully renovated, had a shabby chic atmosphere. 23 galleries, including some of the most prestigious galleries in the city, presented some specific curated projects.

In addition to the fairs and the galleries, Mexico City has lots to offer in terms of museums. One of the most impressive is the Anthropologic Museum. A true venture into Mexican culture and history and one of the largest and most visited museums in Mexico. The privately own Jumex Museum is David Chipperfield’s first building in Latin America. It displays Eugenio López Alonso’s collection. The current exhibition “Scripted Reality: The Life and Art of Television” examines the role television plays in visual culture and art history.

A highlight of my Mexican trip, apart from dancing at the MN. Roy club in Mexico was meeting the Mexican-Lebanese, Berlin-based artist, Beatriz Morales, who is currently working on a significant Museum exhibition, at Museo Fernando García Ponce – MACAY, targetted for next year in Merida in the Yucatan peninsula. 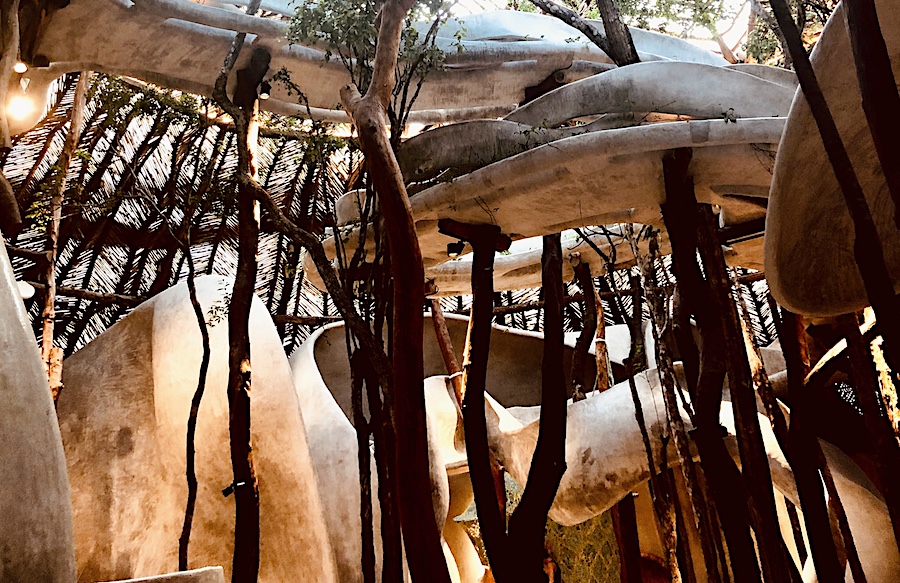 Visiting IK LAB Art Gallery, the “Gaudi-esque treehouse gallery” in Tulum was a unique experience. The gallery is the brainchild of Santiago Rumney Guggenheim, a descendant of the famed Guggenheim family, and designer Jorge Eduardo Neira Sterkel.

I left Mexico knowing that I have just started to explore the richness the country has to offer and visiting cities like Merida and Guadalajara is definitely on my list for next year.