The floors of Tartmus are dedicated to an exhibition to celebrate the centenary of the Pallas Art School,Tartu which opened in 1919. It tells a story of how modernist innovators established new ways of working in the fine arts. With its an interrupted history, the art school’s tale becomes one of rediscovery in the community, of families, reclaiming their personal artistic moments as well as the progression of the artists and their educators. Domestic treasures of paintings acquired and kept silently for years have been brought out and exhibited on what I encountered as the final room of my journey through the exhibition, ‘Pallas in Estonian Homes’. This located the artists’ story in the broader emotionalism, contextualising their difficulties in the surrounding society. They had many detractors, but so many supporters who over the years have valued items made in the school.

There’s such a richness of story and paint, sculpture and figure at Pallas 100

I’m feeling emotional on this trip to Tartu, although it’s my first time. I’m here at the invitation of Psühhoteek, the city’s record shop that specialises in vintage vinyl from the Soviet era. The proprietor and curator, Ahto Külvet and I have been conversing some time and I’m here to contribute to another anniversary, ten years of the Centre of Tartu Creative Industries on Kalevi. I feel connected to some zeitgeist culture happening in Tartu right now. Both organisations are bringing together and celebrating essential artists, many under-recognised; although some are well known in Estonia their art has not been known to me until I began to take a special interest in the area through family, friends and an exhibition in Tallinn last year organised as part of EMPIRE II by Vanya Balogh (with contributory support from Meriliis Rinne). 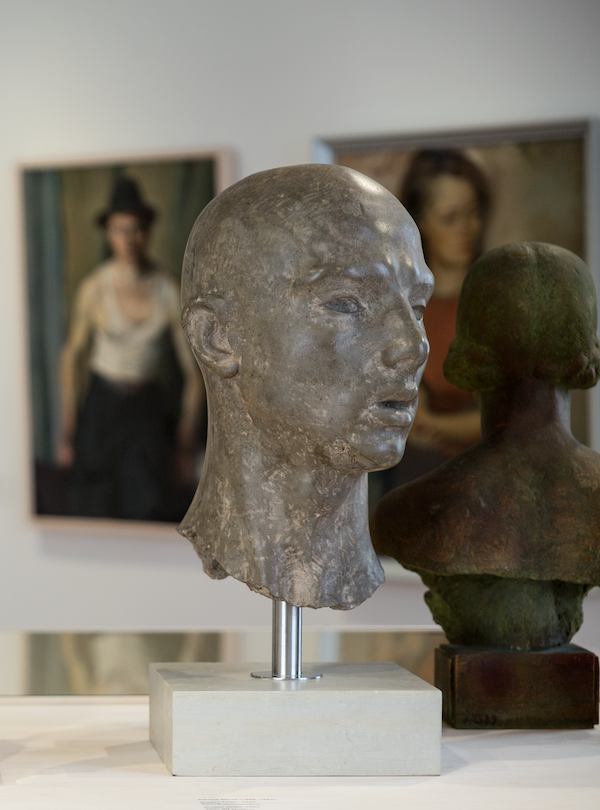 There’s such a richness of story and paint, sculpture and figure at Pallas 100 that I will have to be content to pick a couple of highlights. There is a section dedicated to ‘Female Artists in Pallas’ which points out that more than half of the students of Pallas were women. The first female teacher, Karin Luts, only joined the school in 1940 which it had been renamed the Konrad Mägi Higher State School of Art but the gender-based differentiation in criticism has overshadowed other female talent. Such as Hilda Kamdron and Elisabet Kurre, many of whom are printmakers, my own specialism. There are two outstanding paintings by Karin Luts on display, with their folk art influenced depictions of chess players and sailors. I’m happy to have seen both these pictures which inhabit a world half illustration and half fine art, crossing boundaries as they said past the ducks onto a mysterious island, engaged in traditional, thoughtful activities. The theatrical nature of her work, the stage on which the characters perform, is perhaps helped by a longstanding relationship with theatre arts. Her sister was the well-known actor Meta Luts. Hilda Kamdron’s linocuts catch my eye, also book illustrations with their clarity and fairy-tale scenes. Kamdron made many depictions of the Tartu slums using wood engraving and aquatint. I’d like to see more of her animated character pieces; there is not enough space for her work in the show to satisfy my desire.

The spirit of the school is demonstrated in the large sepia-tinged photos blown up to life-size. They punctuate the pictures, so you feel the spirit of the artists present. There is a sense of happy camaraderie in the pictures. They are not too formal. I feel among friends.

To round up with a couple of pieces. ‘The Fair’ (1923) is a vibrant composition by Voldemar Haas, painted in sickly but vivacious pink and mustard-yellow, creating the otherworld of the fairground, showing a place of the mind as well as of reality. It has a cinematic quality, presaging the carnival world of Technicolor film.

Ado Vabbe, who ran his atelier, is praised for his innovative teaching as well as his varied oeuvre but perhaps the works on display are too slight to get an adequate impression of him as an artist. A watercolour composition from the 1920s shows a playful exploration of scale in figurative abstraction. The colour palette sits somewhere between muted and lively as if chosen for textile design. (Again, that mustard . . . )

Overall the exhibition is more impressive for the story it tells than for outstanding individual works by the selected artists, but its effect is more than the sum of its parts. I know that as a young woman, had I lived in Tartu, I would have been so eager to go and study here. It looks so much fun, a place where unconventional minds clustered to paint, carve, love, talk, make lifelong friendships that took them through social and political strain and I definitely would have been on the boat to the magical island of Saaremaa for the summer sculpture workshops!