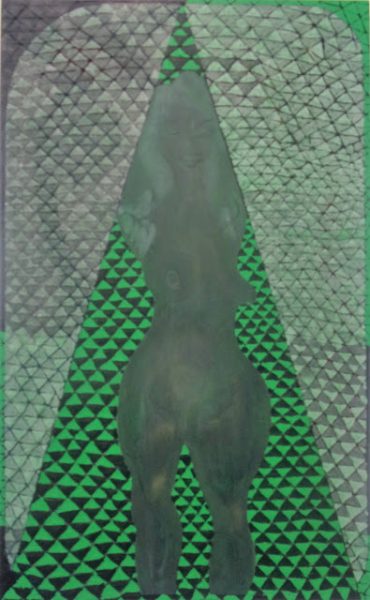 An average year seems the general verdict on Frieze. Everyone picks up on the Focus section of young gallery projects, so I’ve concentrated on the main fair with works from some of the best stands. Most worthwhile art is transformative in some way, but many of my favourite works at this year’s Frieze (to Sunday 9 Oct) leaned a little more explicitly towards the transcendental if only far enough to poke fun at it. Maybe I was looking to escape the Brexit and Colombia votes. My choices are short on figurative painting: there was plenty around, so I’ve popped an interesting new one by Chris Ofili above (Triangles, 2016 at David Zwirner). 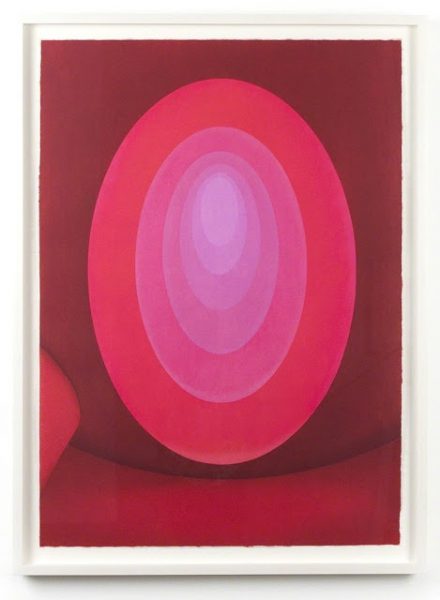 James Turrell is an obvious place to start: his attention to modulated light somehow generates transcendence in the present moment.  Kayne Griffin Corcoran showed projection, photographs and woodcuts – which related seamlessly to each other – emerging from the 2013 Guggenheim Project for which Turrell recast the rotunda as an enormous volume filled with shifting artificial and natural light, effectively turning Frank Lloyd Wright’s iconic architecture into one of his Skyspaces. 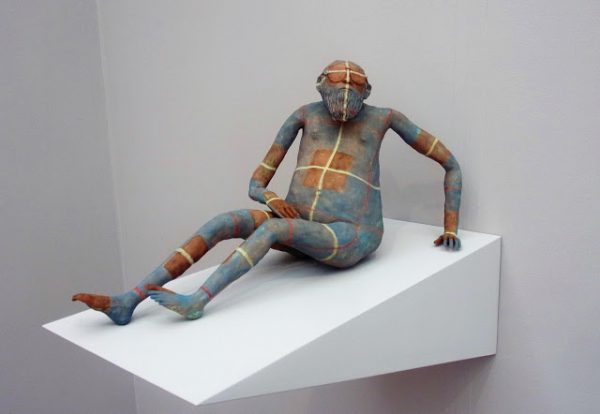 Kate MacGarry’s solo stand for New Zealander Frances Upritchard an extensive range of new work including a nifty range of hats as well as all sorts of new figures. Yet it was John, a character who has returned to the gallery after dropping out in 2009, who caught my eye.  Whatever he’s doing with his right hand, his weirdly all-over Paisley seems just right for a cool dude who, I imagine, has come down to semi-traditional earth after a history of striving for the other-worldly through the portal of drugs. 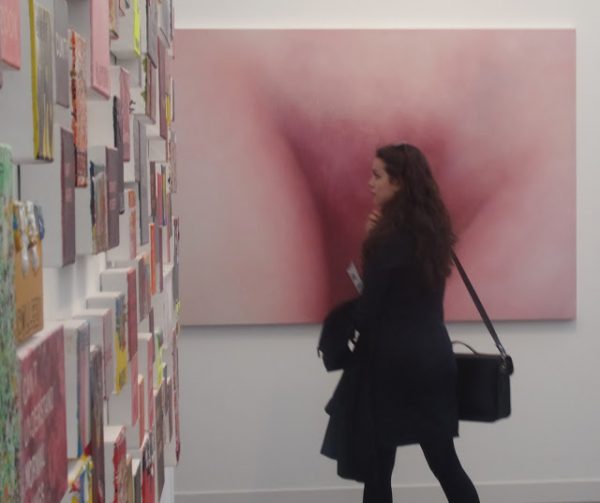 What looked from afar – especially if someone half-hit it –  like a somewhat transcendental pink glow not unlike Turrell’s proved to be one of Betty Tompkins’ depictions of genitalia. Her recent series are soft in focus but hardcore in title, and so impact differently from the black and white penetration close-ups of the ‘Fuck Paintings’ for which Tompkins first became known in the 1970’s. But both appropriate and subvert the masculine gaze of pornography to assert women’s ownership of their sexuality.   Relevantly, perhaps, Celia Hempton had cocks as large at Southard Reid, and there was also… 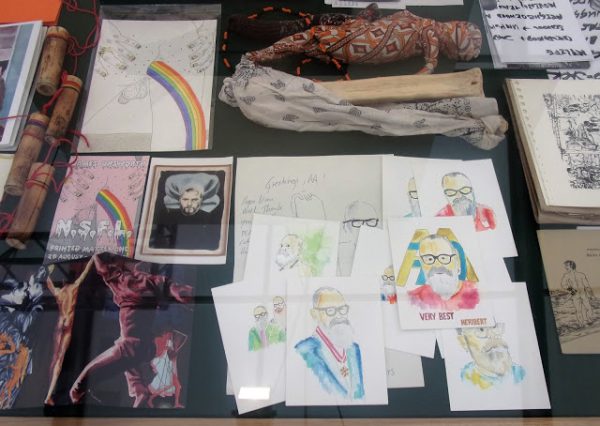 The only survivor for more than two decades now of the still-influential Canadian collective General Idea (1969-94), AA Bronson’s history ranges across over 100 exhibitions, alternative publishing, AIDS activism, erotic novels, shamanistic performances and work as a healer in which ‘butt messages’ are central. All of which you could find traces of in a teeming vitrine at Maureen Paley, made up from items sent by admirers to make up an automatic self-portrait, though there was a small watercolour which Bronson bought – from a James Unsworth show he’d organised, and featuring what I took to be a rainbow standing in for the more out-of-body aspects of sex. 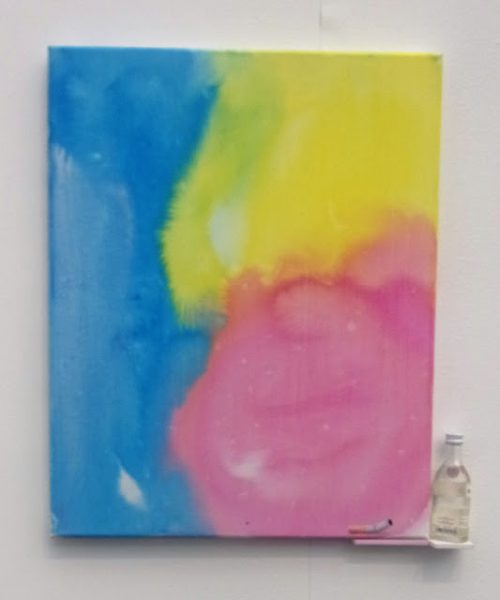 After sex and drugs, can alcohol be far behind? Berlin-based Monika Baer has made a number of paintings which use liquor bottles as a motif too, in the gallery’s words, ‘flirt with the notion of a stable pictorial system’. More recently, their implied commentary has moved  beyond the canvas in a sort of trompe-l’oiel double bluff, and here the attached bottle seemed either to suggest that some distillation of the classic printing colours had occurred or to propose a possible cause for the chromatic vision revealed. 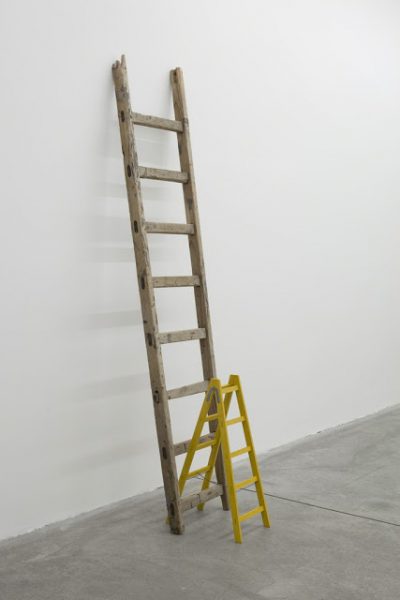 Kurimanzutto, worthy winners of the Best Stand prize, made the Slovak Roman Ondak (also showing at the South London Gallery now) and Portuguese Leonor Antunes (work bought by Tate) chime naturally with a Latin American sensibility. A ladder immediately implies upward striving, but here the absurdly-scaled conjunction of an old wooden original and a miniaturised model suggests the possibility of a change of perspective – and of reconciling the two viewpoints to arrive – who knows? – at a dialectical third way which moves us forward. 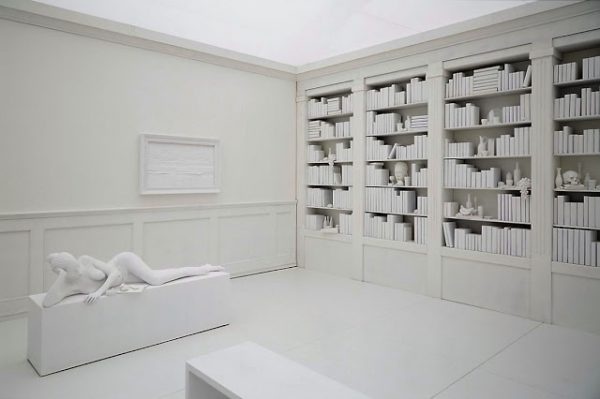 Technically this room contained various separate sculptures from Has Op de Beeck’s recent switch from grey to white for his spookily smooth vanitas realisations, which start from casts and are rendered in gypsum plaster over a wooden armature. Yet it was the whole which had the ethereally striking effect with the whiteness changing the mood and shifting with the light as clouds passed overhead. The wow factor may have somewhat displaced what the gallery calls Op De Beeck’s ‘wide-ranging reflection on the tragicomic way in which humans stage and organize their lives’.  Moreover, anther colourless stand was a winner: Francois Ghebly’s black and white display of 1980’s Channa Horwtiz drawings – which could equally have been in frieze masters but was too old for Frieze’s new 1990’s focus section. 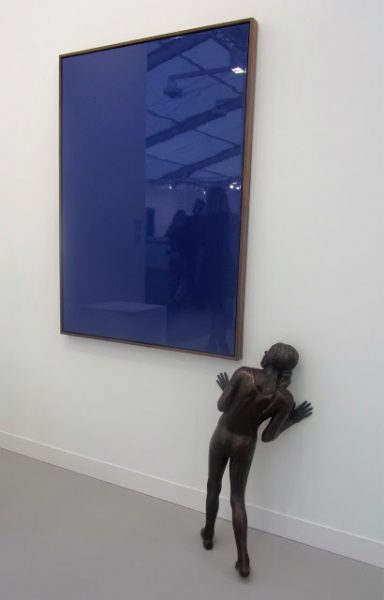 Ryan Gander: Post-life romantic, or Trying to make it on risk and hard work alone, 2016 at the Lisson Gallery, London

Ryan Gander is a fecund cultural magpie, so it was no surprise to find that as well ‘Auto-Abstraction’, his dice-driven curation of the joint booth of Limoncello and Taro Nasu, several of his works were dotted around. Having noticed the ubiquity of Degas’ ballerinas in museums, but feeling for the paradoxically heavy and plinth-bound nature of these should-be-nimble dancing spirits, Gander has set a series free to interact with the art clichés likely to surround them: here she seems to year for the romantic epiphany of a Kleinian blue monochrome. 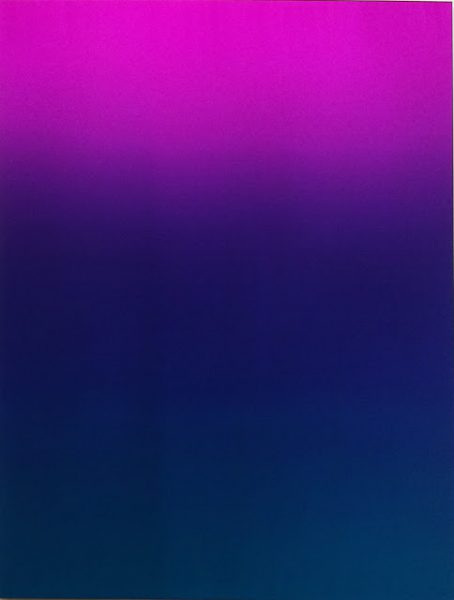 Gander it was who provided the Johnen – Schipper combined stand with a grey curtain backdrop, animated by wind in reference to his Documenta 13 presentation of a breeze as art. Among the works to look good against it were Matti Braun’s lushly restrained, super-saturated hue-shifting abstractions dyed onto silk. They appropriate textile techniques used in religious and ritualistic contexts, but subtract the iconography to leave just an other-worldly shimmer. 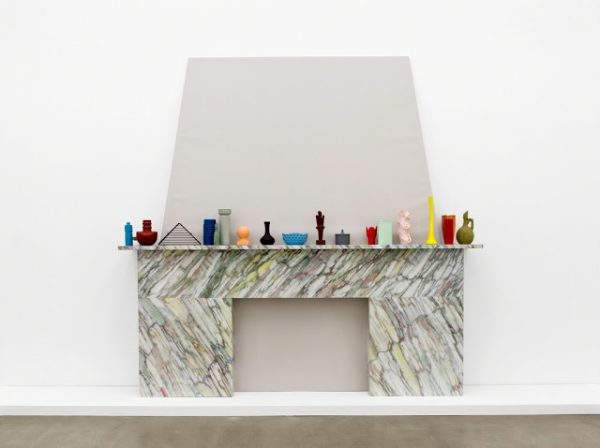 Two contrastingly artificial sculptural surfaces of paint combined effectively at Meyer Kainer. Brussels-based Scot Lucy McKenzie is known for her meticulous recreations in the paint of noticeboards and the effects of stone textures. Her fireplace was, then, fairly typical, and her collaboration with native Belgian Laurent Dupont made it into the display for vessels, in which his quotidian found originals (here from the Czech republic) are transformed by the simple means of covering them with a thick layer of paint. 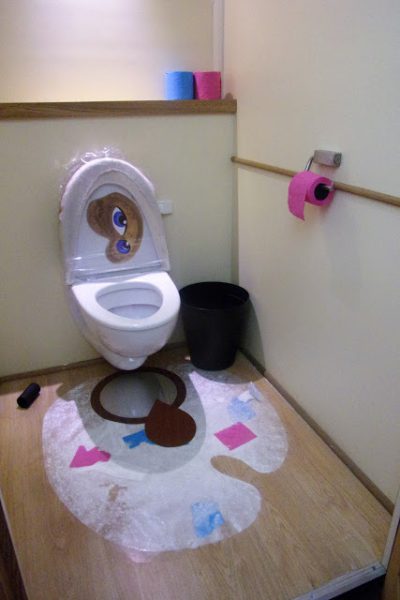 You can’t get more basic than excrement, and of course shit has an honourable artistic tradition. All the same, I don’t remember any Fair previously making the loos as much fun as here. London-based Dutch artist Julie Verhoeven carpeted the men’s in a bright pink and the women’s in bold blue, decorated every stall and urinal with cheeky artworks, and was herself in attendance in a typically outlandish costume – selling sculptural products such as bog trolls and fur turds.  Hidden function and labour were brought to attention and – yes – transcended.

The film programme was a refreshingly concise 15 minutes of Shana Moulton, Rachel Maclean, Ming Won and Samson Kambalu. The other talking point stands were Seventeen’s sit-on-a-snake virtual reality show by Jon Rafman, and Hauser & Wirth’s presentation of their artists’ work as that of a fictional artist in a mock-up studio (were they trying to transcend the grubby fiscal reality of the fair?). Other notable booths included Almine Rech (inc witty young American Carrie Weiss) , Supportico Lopez, Stevenson’s persuasive 45-year survey of new-to-me Penny Siopsis; and Chewdays’ combination of Palaeolithic artefacts with Gabriele Beveridge’s meditations on ephemerality. And Simon Lee deserves a prize for ‘dealing with repeat offenders’, as they put it, by hanging three different solo show on each of the five days. Paulina Olowska’s energetic melange also gave me the opportunity – at Paulina’s invitation –  to take a rest on a sea of blue innards… 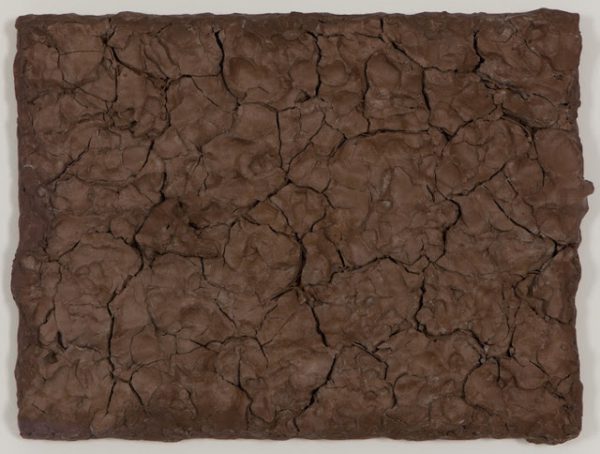 Frieze Masters generates a more relaxed ambience, less obviously in need of transcendence. My favourite solo stands were the three gallery presentation of Frank Stella (collaboration is a definite trend), Ropac’s James Rosenquist, Ad Dekkers at the Mayor Gallery and Nancy Grossman at Michael Rosenfeld. The outstanding thematic display was Luxembourg & Dayan’s examination of ‘the formless’, and I also enjoyed W & K’s presentation of the effect of expressionism on Viennese actionism.