Belgian sculptor Peter Buggenhout makes slippery, near-formless sculptures that typically repulse with their abject materials, yet draw you in to an uncanny unknowability. Now you can see his work, in a rare London outing, at Holtermann Fine Art. Formally, they operate rather like abstract paintings – and Buggenhout trained as a painter – and they actually carry very definite meanings. I asked him to tell me more…

PCK: Your sculptures may be abstract, but they do have a rather consistent subject, don’t they?

PB: Yes, I’m so much intrigued by complexity, and by how this world around us is completely incomprehensible, unpredictable, is a world we cannot grasp with our limited minds. 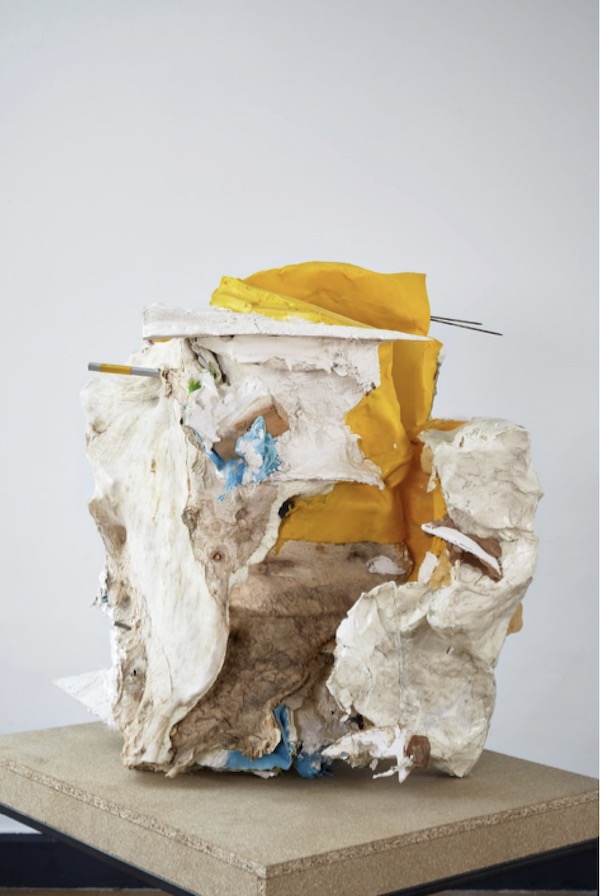 PCK: How did that way of thinking start?

PB: When I was 17 I had ten hours of maths lessons a week, the ultimate counterpoint to what I’m doing now. But I realised I didn’t want to continue studying maths. It was like putting grids on top of the world and trying to make the world fit the grid. People said ‘You’re good at maths and languages, you should do something worthwhile, like engineering’, but I said: ‘No, I’m going to art school.’

PCK: So how do you make a work, and does that process enact your thinking?

PB: Imagine you buy a house. You have two children so you change the house to provide bedrooms for them. Then you sell and it becomes a gallery. It’s sold again, and each time that leads to changes so that eventually it becomes difficult to see where you started from. I see that sort of complexity in the state of the world, and that way of thinking is also my working practice. I start with something that attracts me, and then I say ‘that’s nice, but I’d like it larger’, then maybe I cut it back, then ‘I’d like something blue’, but I actually find something yellow… So yes, the work is a metaphor for this approach.  There are no rules.

PCK: But you depict nothing?

PB: I try not to. When you walk around a sculpture you have different gestalt moments: that’s the way the brain works, we need to classify the world. So you will see one thing, perhaps a face, then something else, as you circle it. I consider a work finished when you can’t put those moments together coherently, when you have no clue any more: I aim to exclude the possibility of recognising one thing as dominant.

PCK: Is there a pessimism in this view that the world is too complex for us?

PB: Over the years I’ve became rather accepting of the situation. What is the answer to complexity? Simplification. But in simplifying, we are not respectful of the world – every different type of chair, for example, deserves a proper name – but that would make it impossible to communicate. It would show the complexity of things yet be self-defeating. So I came to accept things the way they are – a definition of hope, in a way. It’s not that we’ll get to the happier world that the western approach to science promised, but that as every day proves it’s not the solution, you should accept the complexity just the way it is – then a lot of stress falls away. 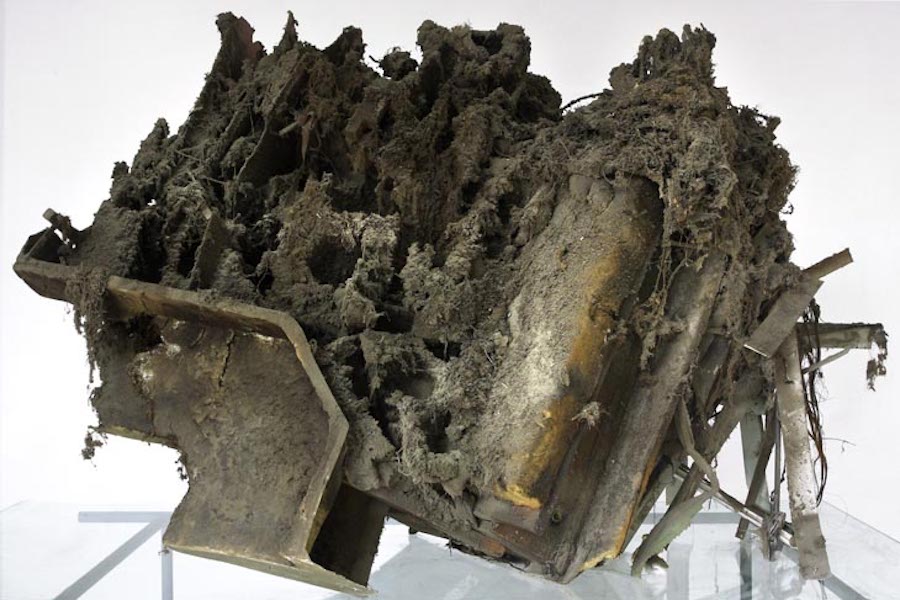 PCK: You work in long-running series, and ‘The Blind Leading the Blind’, of works covered in dust as if happened upon after decades of abandonment, is probably the series best known to British audiences…

PB: I still make the dust pieces – everything is continuous, circling round the same ideas but from different angles – but I realised it didn’t make much sense to talk about the complexity of the world when you have only one way to come at it! And if I wanted to grasp the complexity fully, I had to use other colours and other materials – not just hide it under dust.

PCK: Three other series appear in the show. The ‘Mont Ventoux’ works all use a cow’s intestine as a starting point. What’s behind them?

PB: The title doesn’t say anything about what you see, but about the spiritual approach, the philosophy behind the work. Every series has its state of mind leading to the title. ‘Mont Ventoux’ refers to Petrarch sitting on top of the mountain in France, looking down. He invented the Renaissance, in a way, by saying we can master this world by dividing it, by cutting it up into pieces, by trying to understand it. But he forgot he was standing at a distance. From up there it looks possible, but it’s an illusion to think you can master things. I like to use abject materials – that have been removed from their original context, that have lost their use and shape and meaning. They repulse us at first, but then their indefinability attracts us. Some materials are abject in their essential being – intestines, blood, dust… Other materials can become more abject as they become less recognisable or traceable. 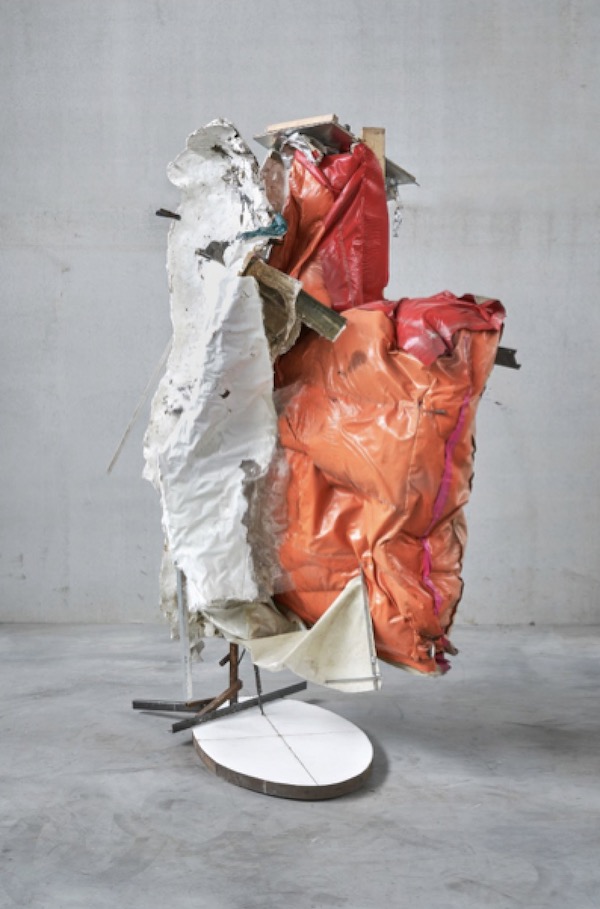 PCK: The biggest work in the show is from the ‘On Hold’ series

PB: I think I’ve done 35 of those. They all start with an inflatable object.  This one is mainly made with part of a bouncy castle – the idea was to squeeze it between different shapes, then I pumped it, and filled it with polyurethane so it did the same thing as air in a bouncy castle. And it’s important that it’s somewhat unstable: it’s a frozen moment.

PB: That series is mainly about human culture rather than the whole world. The marble refers to the Tablets of Moses and the Ten Commandments – the ultimate simplification of society: ten rules, keep to them and you’ll go to heaven. Then I add other materials, just as in the Talmud there are comments on the commandments, and comments on the comments… Soon, we cannot read the history in the stone any more, we cannot read the thing as a whole – that’s my comment on the ultimate simplification of society.

PCK: Your wife of over 30 years, Berlinde de Bruyckere, is also a sculptor – and with a comparable sensibility. What difference does that make?

PB: We are different, as Belinde always remains more symbolic and narrative, whereas I try to push that away. But you might say we are really making art for each other, fighting to please, impress and push each other, trying to convince each other of our values. Sometimes her work comes to me, or I go to her, then it goes away…