I was asked to go out to Maspeth to meet an artist. I wasn’t even sure where Maspeth was. Queens itself intimidates me since it’s a maze of unlikely numbers in opposition with themselves all intersecting in nonsensical disunity. The only thing I knew about Shui Shi Liu is that he is a painter visiting from China who has his studio in Maspeth where he created an installation. And so I and my Uber driver ventured forth into the great unknown, mindlessly following the GPS to this strange world in the obscurest section of Queens, New York. When we arrived at the address, I was looking for buildings that would signify that artists were there, most likely it was some industrial hub or battered old school I thought.

What I didn’t anticipate was an opaque city neighbourhood, bland and remote, to be where the studio held a large-scale installation. I rang the bell, no answer, so I texted the curator Dr Kalia Brooks and a moment or two later the door buzzed me in. I expected to see her but instead at the top of the steps, a smiling round-faced Asian man greeted me. Dr Brooks had not arrived yet, so it was just Shui Shi Liu and me. Since Liu doesn’t speak English, I sat and responded to emails on my phone while he brewed me a glass of woody, fragrant tea. The apartment was smoky with cigarettes and a little chilly. I was, I suppose, immersed in the triviality of things that had to get done. Until the translator, Xingze Li (which means “Star and the light”) arrived, my mind was caught up in my own existential crisis, and the artist in front of me had not been illuminated yet. But Liu would awaken me from perfunctory details holding me in a mundane place within the hour and I would become bewitched. 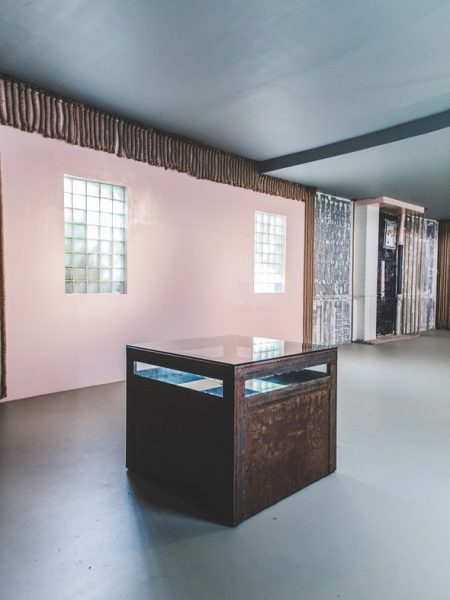 Dr Brooks arrived, and we talked about the execution of Liu’s practice which has always been through the brush; mining this new territory of constructing an esoteric route based on his study of many philosophers, including Heidegger and Aristotle; calling upon himself to go from figurative, to abstract to impressionist painter, releasing his mind into physical cryptic world of storytelling, is it seems, something which Shui Shi Liu is made for. 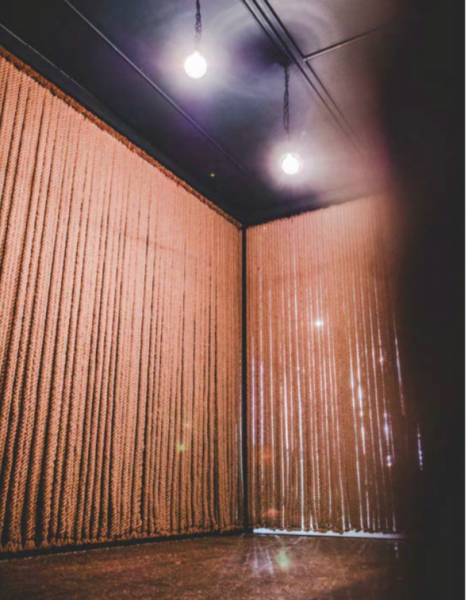 As Xingze translates, Liu talks about the poets and philosophers which inform his life’s’ work. I am waking up to the possibility of a revelatory event about to take place, yet not making presumptions at all. Before we go downstairs to see “Thinking is a Form of Artistic Vehicle,” Dr Brooks, a professor at New York Universities’ Tisch School of the Arts stops to show me a self-portrait Liu has painted in murky greys; shadowy tones give Liu’s inner-self away. It seems not to resemble the face of the man before me. The man in the painting has a long almond-shaped face, and the chin is cupped with a full white beard, seemingly Caucasian, the face is of a very old sage with a kind of otherness which is fascinating and unexpected.

We all descend the stairs to a new reality leaving the former behind. Abruptly we were inside a squared off space of heavy industrial hemp ropes tied off at the ends, perfectly aligned hanging from the ceiling; the floor is brown-shellacked pebbles embedded in cement. We are at once enclosed in a box of sorts, but the ropes are not affixed to the floor, if we separate them we can pass through to the next level of the construction. This section is called “The Existing One Feeling One’s Existence.” Dr Brooks tells us, “This installation is named “Thinking is a Form of Artistic Vehicle” and it’s comprised of nine elements. Every aspect of this space has been manipulated in some way, so even the most mundane element like the floors, ceiling, infrastructure, piping, and heat, all of this has been taken into account—thinking about how the space would transform…So, there’s a lot, just regarding sensory information. But it’s also very harmonious. Even though there’s a lot happening, it doesn’t overwhelm; there’s a softness to the space which lends itself to the idea that you’re in a work of art and you’re also a part of Liu’s idea of what the human bodies relationship should be with a work of art. It’s kind of a sensory exchange; there’s this kind of reciprocity that’s constantly going on. He’s super conscious of that; he’s very conscious of the body’s relationship to the art object but also the artistic process. And a lot of this experience is about subverting how we traditionally experience art and merging.

I say that because there are certain anthropomorphic elements to this installation, for example, you walk in and you see a skull. You know, there’s these reminders about the presence of a body—or the kind of indication of a body. And there’s also these kinds of directional markers as well; this rope that intersects with the painting…It really is a part of instructing, (for lack of a better word), you’re relationship to this object, the direction of your gaze. And also, the self-consciousness of your body in relationship to this piece, and then the skull itself is also oriented in a particular direction. “ 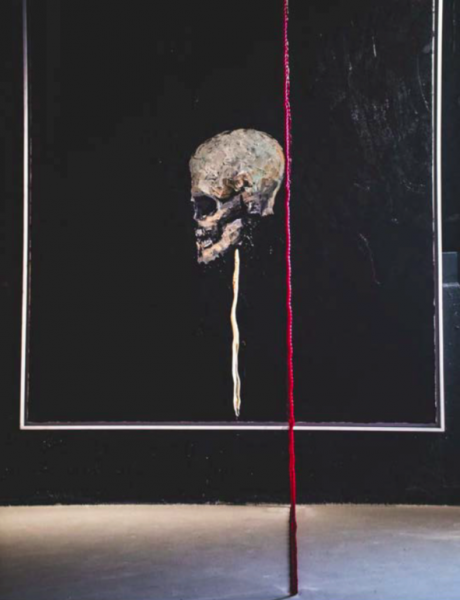 Xingze interjects on behalf of Liu, ”Because he’s talking about a sense of loneliness…Also, if you use a figurative object, like a face, it will be too figurative. Everybody has a skull. “
Without the flesh and features, there is no judgment, it’s neutral, it’s totally neutral, and the only thing one can see and feel is that sense of loneliness, of being cut off. It is what happens when we are not distracted and are forced to ponder how separate we really are in our own ill-fitting reality at times. We are in a construct of perception.
As we walk through the long expanse of space, I am noticing all the nuances of each segment of the nine elements which Liu is revealing here. He has installed everything methodically, perfectly achieved, each bit. “Perceived vs Perceiving” is a window of glass squares with ropes of hemp and a painted pink wall several feet long. Each moment leads to the next experiential value with its own significance playing off of the next.

In the centre, a large square glass cabinet with mirrors requires one to struggle a bit to see inside. Another representation for transitory communication. The word “ARE” appears which phonetically sounds like “ART” to Liu and also means “to be”. To see yourself reflected in the encasement of the vessel which holds the “ARE” is to strive to see oneself because you must struggle a bit to see it. It is a challenging achievement, like rock climbing.

“There are all these little communicative devices that are part of this installation and how people communicate, how we communicate with things, how art is a vehicle for communication. Liu has dedicated himself to striving for this idea of pure communication as an artist. Is there such a thing? Can you purely communicate? Can you purely express yourself? Can it not be tainted by any other aspect of existence of society or politics? He’s really invested in that exploration which is why he’s spent so much time by himself reading.” Dr Brooks tells us.
When artists like Liu give themselves over with ferocious commitment to the mission of their vision without thinking of fame or fortune, without the bottom line, getting something other than the triumph of the vision realized — to be sure it is genuine. An authentic manifestation of something that they cannot help create; it took him eight months with five assistants to complete. The former garage has been architecturally altered because he had to do this. Liu found space, and he made what he absorbed from poetry and philosophy, from art, from all and everything, and interpreted it through his own dynamic of pure communication and manifested this work in the obscure environs of Maspeth. That’s one amazingly fearless thing to do, but to offer up a monument of sorts to art, to the amorphous construct of communication in such a profound way, is something one must see, if they can, in Maspeth.

You can see Shui Shi Liu’s latest exhibition of paintings “ORIGIN” presented by Miranda Kuo Gallery located at Next to Nothing 181 Orchard St, NYC