Under an image of Richard Woods’ ‘Small House’ installation at Southwark Cathedral, Fergus Butler Gaillie, in a recent article for The Spectator, criticised Cathedral art exhibitions as gimmicks bringing the temporary stimuli of consumerism into “places dedicated to the majesty of the eternal.”

His concern was that such temporary exhibitions disrupt spaces built for solemn reflection with their heightened engagements and the number of people they attract. On one level, his piece seems to be a plea for greater space and stillness in already cavernous spaces, while, on another, it seems to be predicated on an unhelpful and unnecessary sacred-secular divide. Fundamentally, it claims that much modern stimuli are antithetical to solemn reflection or reflection per se. Recent and current Cathedral exhibitions, including Luke Jerram’s Gaia installations at Chelmsford and Southwark Cathedral’s and Luxmuralis’ Sarum Lights – Renaissance light and sound spectacular at Salisbury Cathedral, would seem to call Butler Gaillie’s contentions into question. 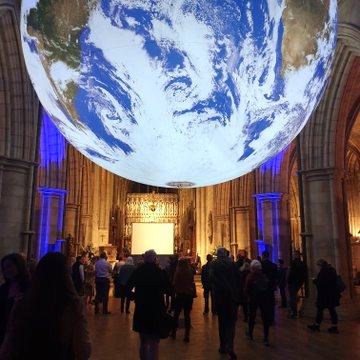 Measuring seven metres in diameter, Gaia features 120dpi detailed NASA imagery of the Earth’s surface, enabling visitors to see our planet on this scale, floating in three dimensions, as if from space. The installation aims to create a sense of the Overview Effect, first described by author Frank White in 1987. Common features of the experience for astronauts are a feeling of awe for the planet, a profound understanding of the interconnection of all life, and a renewed sense of responsibility for taking care of the environment. Jerram hopes visitors get to see the Earth as “an incredibly beautiful and precious place” and as an “ecosystem we urgently need to look after – our only home.” “Halfway through the Earth’s sixth mass extinction,” he says, “we urgently need to wake up and change our behaviour” “to quickly make the changes necessary to prevent runaway Climate Change.”

Luxmuralis is a collaborative team of artists from different backgrounds and artistic disciplines headed up by sculptor and artist Peter Walker and composer David Harper. Luxmuralis aim to take Art onto the streets and provide access to visual artwork in unexpected places while exploring the development of the fine art tradition through new media and placing the medium in an art historical context. The third in their Sarum Lights series enables viewers to discover the history and art history of the Renaissance anew through music and images projected onto the Cathedral’s West Front, in the Cloisters and the main Cathedral building. Their immersive experience draws the viewer into the heart of some of the greatest paintings and artworks of all time, rekindling the wonder and excitement that must have been felt over 600 years ago at the unfolding of this extraordinary period in history. A period that bridged the gap between the so-called ‘dark ages’ and the modern world produced artists, architects, musicians, philosophers and scientists who remain household names and transformed all parts of European society – culture, Art, science, politics, geography and economics. 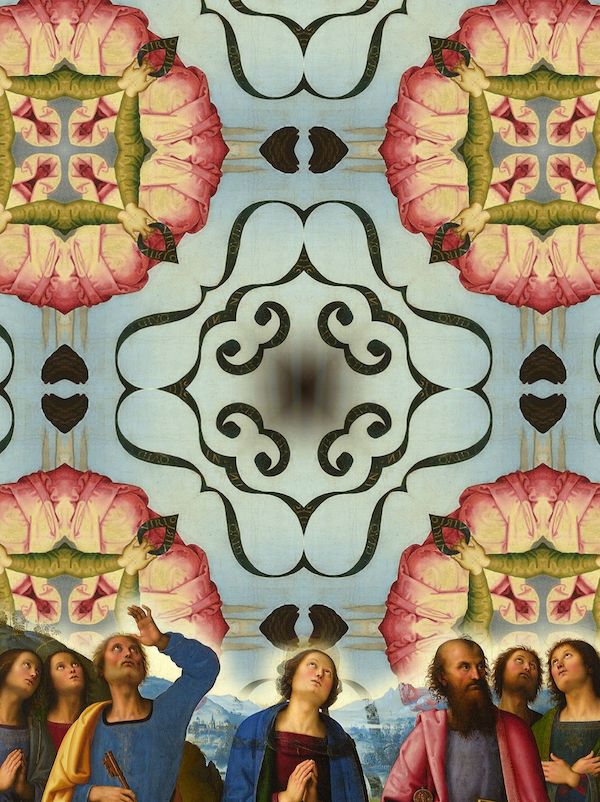 While utilising the stimuli also employed by consumerism and doing so temporarily that draws in large numbers of those who might not otherwise attend these “places dedicated to the majesty of the eternal,” they do so to enable solemn reflection. Are these installations’ means and mediums only applicable to consumerist persuasions, or can they be utilised for other ends? Is the message of these media solely consumerist, or is another paradigm opened by their use in these “places dedicated to the majesty of the eternal”? Butler Gaillie seems to suggest that the media used in such installations is inherently linked to consumerism and that it overwhelms and negates the reflective nature of Cathedral spaces. The experience of Gaia and Sarum Lights – Renaissance in their respective Cathedral spaces is, I would suggest, very different from that which Butler Gaillie argues is generally true of Cathedral exhibitions.

For me, there is a reflective heart to the experience of viewing Art in whatever media that is synergistic to the reflective nature of Cathedral spaces. Ceramicist Marta Jakobovits may feel similarly in that she has included a piece entitled ‘Meditation’ in her ‘Look and See’ exhibition. This exhibition, as a whole, rewards sustained attentive looking and suggests that meditative activity, on the part of both artist and viewer, results in truly seeing. The two stacked and bowed squares of ‘Meditation,’ through the irregularity of their glazes, marks and spaces, enable the striations and markings of the stones grouped alongside to be freshly noticed and not overlooked. Jakobovits collects stones from all her travels, which she then incorporates into her installations.

Clay is a natural substance taken from the Earth to be manipulated and formed by humans. Our formative actions, however, cannot be detached from nature as the forms, colours and textures of ceramics all echo natural equivalents. Jakobovits emphasizes this reality by setting groups of her works on elongated beds of sand or leaves and amongst stones and bark. These installations, which evolve in new combinations and iterations each time they are displayed, have synergies with aspects of Land Art as they evoke journeys or pilgrimages through life, history or time.

She views ceramics as a special language for “approaching the deep secrets of our existence”; trying to “understand myself as a human being and my relationship with nature.” She places “the resulting shapes and families of shapes in a personal context with natural objects and materials or even directly in natural environment” so that there “is a constant dialogue with the nature around me.” Her work has been described as “a spiritual diary translated into material.” She has said that her “ceramic pieces easily dialogue with natural materials and together they create places for meditation, spiritual islands, circles, roads and pilgrims’ ways.” 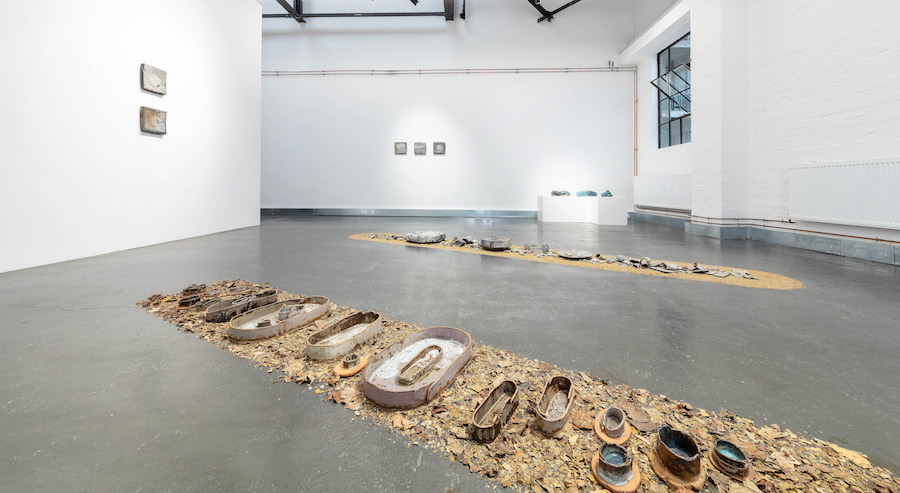 Jakobovits has become one of the most renowned ceramic artists of her generation in Romania and Hungary and her international reputation is rising in the field of fine arts. If you are interested in ‘Strange Clay’ at the Hayward Gallery, you should also make the journey to Creekside to see this exhibition.

Sandra Bowden believes that artists do not merely put on canvas what can be seen, instead, they try “to uncover something beyond the range of the eyes.” She believes “that art is a means to illuminate both the interior life and the exterior world, both seen and unseen” and hopes that her ‘Reflections of Glory’ exhibition will lead those who see it “beyond the edge of their consciousness into a place of splendour, wonder and transcendence.” This is, again, a place of meditation and reflection.

Two multi-panel installations feature; forty encaustic gilded panels and forty black panels that are incised with text, become ’40 Days/40 Nights’ while another multi-panel work has 100 5″ x 5″ gilded squares and is entitled ‘One Hundred Percent’. These gilded encaustic panels recall iconic paintings from art history as their distinct shapes identify the historical work. Still, because of their solid gold surface, they allow the viewer to delight in the radiance of each panel while drawing on memory and imagination to fill in the forms. These installations continue Bowden’s multiple series of paintings and prints that relate to archaeology findings, geological forms, early languages, musical scores, ancient illuminations and the history of Art. 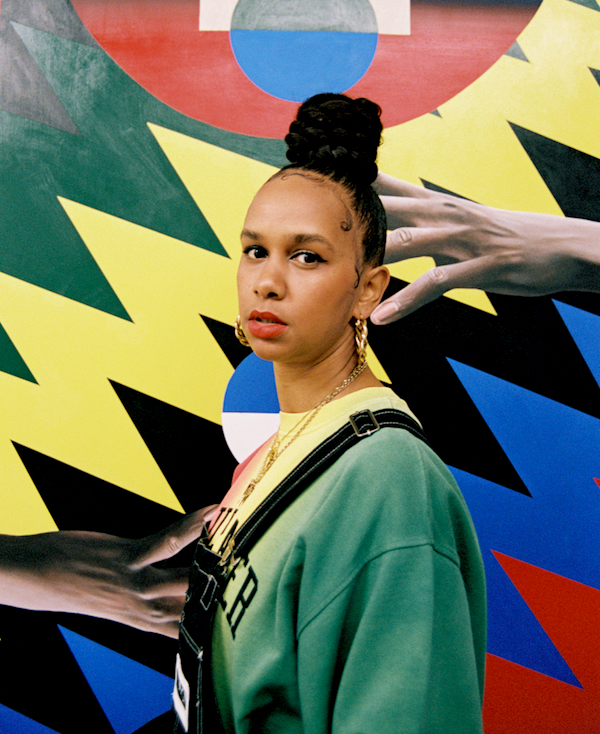 Lakwena Maciver creates painted prayers and meditations that bring messages of hopeful possibility, a utopian vision that dreams of redemption and liberation. ‘Lakwena Maciver: A green and pleasant land (HA-HA)’ finds inspiration in the landscape of the Yorkshire Sculpture Park, the 18th-century ha-has (concealed walled ditches), and the simultaneous implementation of The Enclosure Acts that drastically changed and privatized access to land across the UK.

As a result, themes of power, ownership, access, control, boundaries, and division provide the impetus for these new paintings and textile works, which use dazzling hues and concise phrases to comment on how public speech and public spaces are still controlled by a privileged elite today. While YSP’s verdant landscape is considered as representing an Eden-like place that once belonged to wealthy landowners but is now openly accessible by a diverse audience, a bank of vivid panels incessantly proclaiming the word ‘Ha-ha’ overturn the feature’s deliberately clandestine existence and draws out the allusion to laughter, asking whether we are laughing along or being laughed at by those at the helm of power. A laughter soundscape featuring laughter from members of the public who submitted their recorded laughter for the exhibition reinforces the ambiguity as Lakwena questions hierarchies of access to speech and space and imagines what the paradise we all long for might look like without the boundaries that are created around us and the systems that polarise us.

The discovery of the St. Foy Abbey church, a masterpiece of western Romanesque Art on the Compostela trail, drew Pierre Soulages to consecrate his life to arts: “When I was 14, it was in front of Conques abbey-church that I decided Art to be my sole interest in life (…) Conques is the site of my first artistic emotions.” Forging a career of extraordinary inventiveness and longevity that sealed his place in art history, he created a vast body of abstract paintings. As a result, he became known internationally as “the painter of black and light.” In 1979, he initiated his lifelong series ‘Outrenoir’. This translates as “beyond black,” a concept that opened onto a new realm transcending purely gestural and monochromatic abstraction. Systematically applying black paint in thick layers on canvas, Soulages meticulously scraped, striated, and sculpted the paint to create smooth or rough areas that reflected light in various ways. By turning black into a luminous colour, Soulages powerfully evoked the genesis of the world, which came out of darkness. 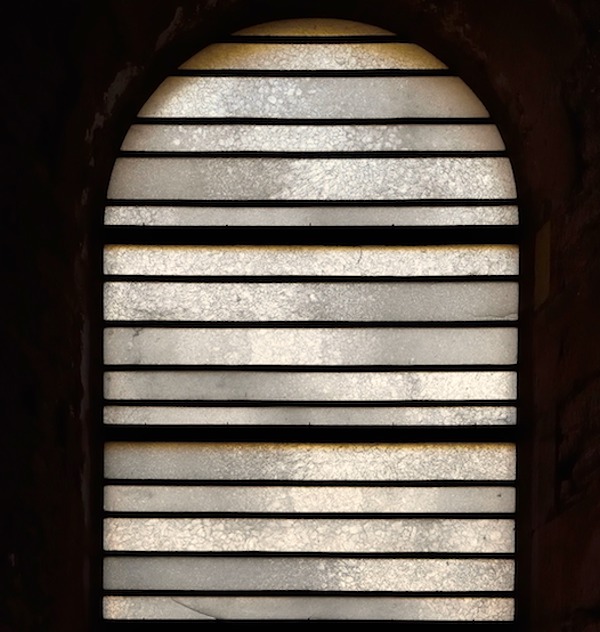 In 1986, Soulages who died last week aged 102 returned to the church near his home town of Rodez to create one hundred and four windows for St. Foy Abbey church. For this project, Soulages created a glass which is not transparent as it “diffuses and modulates the light”, allowing “the light through without bringing the exterior view in.” This colourless glass is called “water white or achromatic” and “respects the natural light waves.” Soulages also uses “oblique lines, rather flowing, slightly curved, stretched more or less, with the tension generally driven upwards.” The windows have no orthogonal lines, “only soft ones visualizing life energy rather than gravity.” These follow the modulation of the light, a light “in accordance with the function of this architecture and the emotion felt in this space, agreeing with its purpose of contemplation, meditation and prayer.”

Soulages was, therefore, another who saw Art as agreeing with the purpose of contemplation, meditation and prayer found in sacred spaces.