Rarely does a second go, a revised version, a re-edited revamp, turn out much better than the first presentation, but now Tramway, together with curators Beca Lipscombe and Mairi MacKenzie, have a triumph on their hands. Fashion and Textiles in the Life and Work of the Artist Steven Campbell tells his story using the thread of his dramatic outfits. His kids may have wished for an “M&S dad’ like their friends had, but Campbell was always out the make a big statement and his memorable personality made anything ordinary impossible.

The story is superbly told by his wife Carol, in virtual, high tech, cutting edge 4D. One click and you are in Tramway’s main gallery, surrounded by Campbell’s paintings and possessions, guided through the exhibition by the person who knew him and his work best. In this time of zoom and isolation, the way of seeing exhibitions has totally, fundamentally changed. The first longer, more in-depth version of this show was annoyingly clunky with far too much digital manoeuvring. This brand new Guided Tour, DRESSING ABOVE YOUR STATION, is superb, fascinating and technically masterful, quite the best virtual presentation I have seen so far. 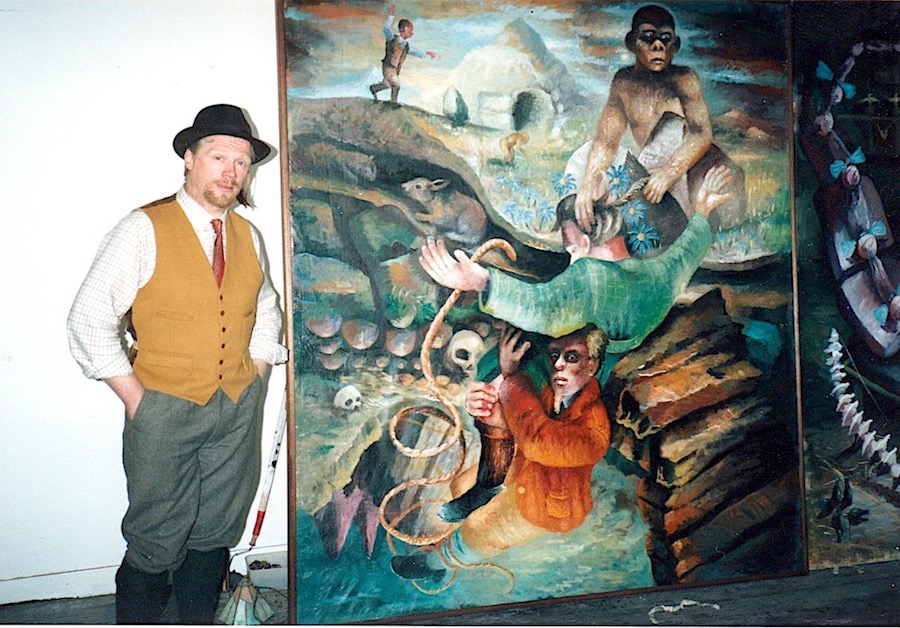 Set within a scale digital model of Glasgow’s Tramway, it takes us from their love-at-first-sight meeting in the mid-1970s when he worked at Clydebridge Steelworks via GSA 1978-1982. Campbell became famous fast. With his penchant for snappy dressing, surreal storytelling and gift of painterly experimentation, by the time he graduated from GSA, he had made his mark.

Then New York on a Fulbright scholarship and first solo show, 1983, at the Barbara Toll Gallery. Always a snappy dresser, in Manhattan, Campbell adopted a romantic tweed haggis n’ tartan style. He did this consciously, deciding he would be ‘The Scot in NY.’

After three years, Steven’s love of Scotland drew them home to a pastoral farmhouse in the Fintry hills. Many notable shows and adventures to Italy followed. Carol’s voice-over guide is perfect, as always the consummate support. Campbell died in 2007, aged 54.

I met Campbell before his graduation, next in NYC in 1983 when I was curator for the only Scottish show at Britain Salutes New York. He and Carol came to the opening in Columbus Circle with his dealer Barbara Toll. My archive contains many photos of us walking in Manhattan’s Lower East Side, at parties in NY, dinners in Edinburgh and London, exhibition openings, Steve in his messy farm barn studio, his kids when small, and sometimes my young daughter there too. A baby buggy – then called a pushchair – is often present. I have many stories to tell.

My action pictures from 1995 showing Campbell painting his tremendous 30ft /9 metre mural for Glasgow Airport include their third child, son Rory, climbing up any and every structure available. 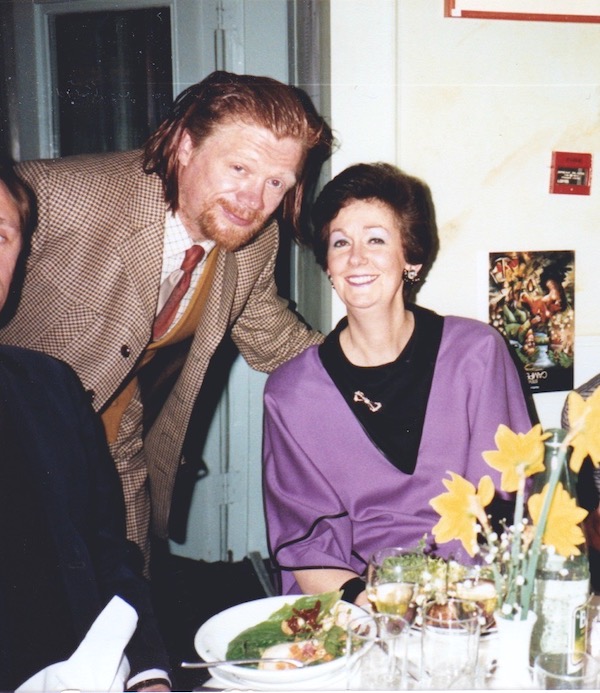 Despite being a public piece, it is one of his most joyful and personal pictures, including family along with celebrating nature and the natural world – about 20 birds, ten fish, salmon leaping up a waterfall, a plethora of plants and flowers, including a deliberate reference to Mackintosh’s iconic purple fritillarias – all inspired by the view he saw when driving into Glasgow from his home.

”It’s called The Golden City and shows Glasgow in a vast, glorious, romantic golden glow bordered by nature,” he told me, gesticulating towards two immense panels propped against the wall of a chilly Perthshire mill, the size of an aircraft hanger and scattered with boats, machinery, lathes, and industrial-type clutter.

I first saw the 14 sketches for the Airport mural on his dining-room table amid Christmas clutter. Driving to and fro from his new studio, I began to see things through Campbell’s eyes. The Carse of Stirling provides splendid vistas and villages laid out at your feet in rich, fertile, open countryside amid the Fintry Hills. Campbell’s vision for the airport mural is inspired by the view as you approach the city from the north. Cupped by dark woods, ploughed fields and flowers, it will feature birds, leaping salmon, wild animals, and butterflies; an idealised and idyllic Glasgow, but one bound to please travellers.

”I’ve got to get the balance between nature and the city; the Dear Green Place idea. It’s tempting to add something dramatic, but it would be the wrong thing to do for the airport location. It’s not the place to be dark and moody. No way! I want people to be uplifted; invigorated. I love Glasgow,” averred Campbell. The mural is now housed in shuttered Paisley Art Gallery, and we all await its opening, which has been too long delayed.

Intense, charismatic, difficult and generous, always dressed to kill, I wonder how Steve Campbell would handle today’s relaxed, casual, sloppy Lockdown squalor? I guess he would ignore it, continue to make an entrance, and charm us all with his throwaway panache. Thank God for individualism, I say.

Dressing Above Your Station is a virtual exhibition produced by Panel and developed in partnership with ISODESIGN and Rob Kennedy.

31 March to 17 June, you can visit this exhibition virtually in our T5 gallery, where we will have a tablet on display for public use.