Western philosophy has long struggled with the relationship between mind and body. If the mind is ‘internal’ what is its relationship to the ‘external’ body? Is the invisible mind ‘private’, while the visible body ‘public? If this split exists, where does the ‘real’ reside? For Descartes, the proof of his existence was that he was capable of thought, that he could observe himself thinking. While Leibniz believed that ‘each single substance expresses the whole universe after its own manner’. While philosophers tied themselves in knots trying to define our essential essence and whether or not to include God in the equation, the history of painting struggled to find its own ways visually to describe what it means to be human. From the first cave paintings to the seductive doe-eyed gaze of the Egyptians, via the Michael Angelo’s figurative description of God in the Sistine Chapel, to Rothko’s colour fields that give us a ‘feeling’ of the sublime, painters have struggled with these same complex questions. Who am I? What am I? 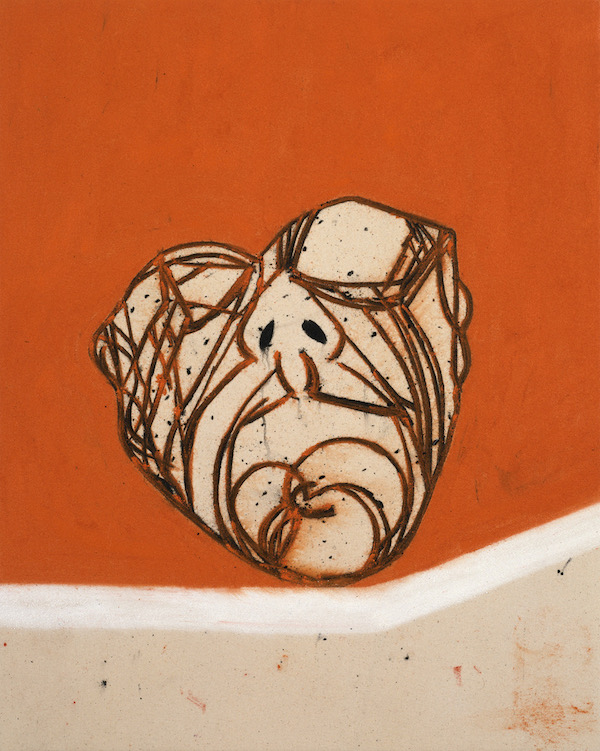 Among contemporary painters, none has investigated what it is that makes us individual and human more eloquently than Tony Bevan. Like Rembrandt, Soutine and Van Gough, he has turned to the self-portrait, not as an egotistical enterprise, but as a tool to explore humanity and self-hood. Portraiture has traditionally – particularly before the days of photography – been used to denote the social status of the sitter and, by implication, their relationship with the viewer and painter. Painted portraits were a way of telling the world who one was. How one wanted and expected to be seen by others. Where one fitted in on the ladder of social hierarchy. Later, photography was able to catch an ‘exact’ likeness and, as a result, ‘copying’ became less interesting to painters.

There is something atavistic about Tony Bevan’s heads that meld an archaic charcoal line that might have been produced by a cave painter, with the sophisticated semiotics of body, space and location. Drawing a stick of charcoal across the surface of a painting or drawing, he leaves a trail of debris like the cinders scattered from a campfire. This line roots us back to our ancient beginnings, whilst connecting us to the modern, aware painter making use of this most basic material. Working directly on canvas or paper pinned to the floor, the smeared detritus and incidental marks left by this process become embedded in the finished work. He then applies raw pigment and acrylic with a brush where the bristles have been cut down to an amputated stump. His signature colour is cadmium red. With its intense emotional charge, it suggests the ox blood of ancient ritual sacrifice and has all the frisson of the red used in Cy Twombly’s Roman paintings. His palette is restricted to red and orange, violet, blue and cream for colour, in Bevan’s work, is never employed simply to ‘illustrate’. It is always felt. Always carries an emotional charge. Grinding his own pigments, he is able to balance their different densities, while the charcoal he uses comes from willow, poplar and vine.

Sometimes, wrongly in my view, he is linked with Lucien Freud and other School of London painters, as well as Freud’s young acolyte, Jenny Saville. But they have little in common except an interest in the human body. For Freud, Auerbach and Saville the obsession is the difficulty of using paint to describe sentient flesh, whereas Bevan uses his line more like a cartographer to explore unknown lands and alien terrains that are spatial, architectural and psychological. That the metaphor of map-making is one commonly employed in psychoanalysis is highly apt, for Bevan’s line, like Theseus’ thread, is a vehicle for discovering the depths of human psyche.

In Head 2004, the scar-like black and red lines criss-cross the face as if inflicted by the ritual of tribal scarification or tattooing. Disembodied and lying precariously on a slope against an orange background, it conjures both Sisyphus’s’ stone bolder and the decapitated heads discovered in Joseph Conrad’s Congo. Taking photographs of himself in the studio from unconventional angles, Bevan uses these to emphasis his features from unnatural angles – flared nostrils seen from below, a thrusting chin – in order to map, not a likeness, but a psychological space. Perilously tilted, this rock-bolder-head looks as if it might roll away at any minute. The eyes are not visible so that like Tiresias, the prophet of Apollo in Thebes, made famous by T.S. Eliot in The Wasteland, it appears blind. Yet it is also heart-shaped like a pulsing organ recently cut from the chest. Both vulnerable and full of pathos, it is a shockingly arresting image.

The more I look at it, the more it reminds me of Giacometti’s floating heads with their framing lines containing a mass of whirly marks that bestow an overall solidity within that frame. Close to writing or some arcane language, these marks express both a nervy, edgy, existential anxiety and a chthonic sensuality, a feeling that is found in Bevan’s work. Like Giacometti, Bevan works on the edge of abstraction, whilst remaining a recognisably figurative painter, thus forcing us to identify with the human body, along with the fears, desires and emotions held within the nest of marks. Set against what might be an orange dystopian sunset, Head 2004 emerges from its series of whorls and swirls, disconnected from any other part of the body. It could be a mask from a Noh drama, or the head of John the Baptist held triumphantly aloft on a silver platter by Salome.

For much of the late 20th-century art became obsessed with its own narrative of art-as-art and with the spatial qualities of flatness. Often these formal aspects became the dominant grammar of a painting. Whilst Bevan is acutely aware of these academic arguments – acknowledging the flatness of the surface, for example, by working on the floor – he has moved beyond painting’s recent solipsistic concerns to return to a sense of reverence for the human body, particularly that seat of the self, the site that defines who and what we are, the head.

Sue Hubbard is an award-winning poet, novelist and freelance art critic. Her fourth poetry collection is due this year from Salmon Press. Her latest novel Rainsongs is published by Duckworth.