Jim Ede was a writer, curator and ‘friend to artists’ who created Kettle’s Yard with his wife Helen Ede, an art teacher, by carefully positioning artworks alongside furniture, glass, ceramics and natural objects, with the aim of creating a harmonic whole.

His vision was of ‘a continuing way of life … in which stray objects, stones, glass, pictures, sculpture, in light and in space, have been used to make manifest the underlying stability.’ This vision derived from his understanding of ‘art as a means to spiritual growth.’ From the early 1920’s onwards ‘he had been deeply interested in the spiritual and had developed a particular fascination for Asian and Middle Eastern cultures.’ His interest ‘was enhanced by his friendship with the painter and poet David Jones, as well as during the 1950s, the American painters William Congdon and Richard Pousette-Dart’; both of whose work ‘revolved … around transcendental themes.’ 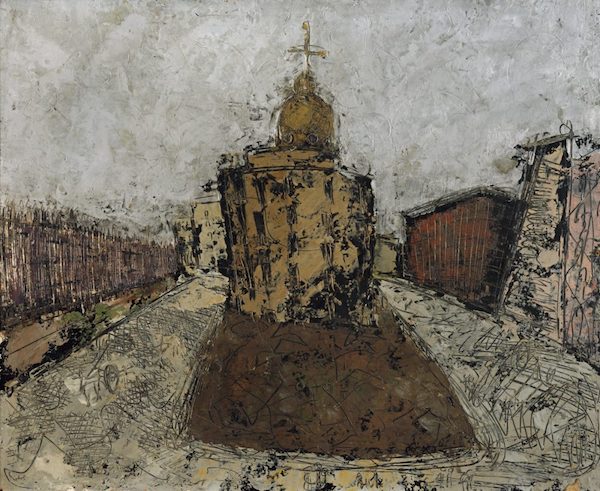 Ede befriended Congdon in America supporting him through his conversion to Roman Catholicism following which Congdon relocated to Italy focusing for a period on religious imagery and thereby losing his dealers and reputation. ‘Thanks to their friendship Ede amassed the most significant collection of works by Congdon in Britain;’ many of which have holy sites as their central focus.

Congdon first visited Ede at Kettle’s Yard in 1966. He described the house as ‘that prayer that you live’ and regarded it as a place where ‘art may truly breathe in God.’ In the collection gathered together in the house, Congdon believed that God was giving through Ede. An exhibition of Congdon’s work was curated by Ede at Clare College Cambridge in 1968 and this year (2019) saw a second such exhibition held at Jesus College Cambridge.

Congdon: American Modernist Abroad focused on the international experience of Congdon as a tireless traveller and artist. Congdon made his name in New York in the early 1950s before moving to Venice where he became a close friend of Peggy Guggenheim, who avidly collected his paintings. While travelling widely across several continents, Congdon’s base remained in Italy, and he eventually settled in the countryside near Milan. His work unites the abstraction of post-war modernism with more traditional themes of landscape and city views, always with a persistent spiritual element underpinning his art.

Congdon said of his painting process, ‘I always paint what I am, not what I see,’ making his crucifixion paintings, in particular, an existential experience: ‘The body I met is my own body hurting from sin, a body soaked with pain to the point of being unable to distinguish the body from the pain, as if the pain had become a body and not the body a pain… in short, I recognize that the Christ on the Cross is myself; that it is my sin that is nailed to the Cross! It is my own flesh that I paint with the certainty of the Resurrection within me.’

These works are among the most tactile Congdon created. Congdon typically constructed paintings by scraping thick layers of oil paint on a prepared blackboard into which the outline of the subject would then be scored. There was both physicality and tactility about this approach which meant that Congdon put his entire self into the work, as indicated in his injunctions to: ‘Use a knife – never a brush which only compromises. A knife constructs! – without tricks. Don’t presume to pick, mix, choose your colours, but toss a sea and fish for gold in it. It comes with courage and freedom. Don’t mix colours – mix ideas, feelings.’

In his book A Way of Life, Jim Ede described Congdon’s rich use of paint as flowing ‘sometimes like molten lava’ and solidifying ‘into the wonder of stone.’ Congdon also used a similar metaphor writing of Crocefisso No.90 (1974) that ‘It is all a flat squashed dry lava flow, but trampled, as if the traffic of sin had crossed over it until the body became a stain.’

Congdon’s crucifixions are among the most original and profound responses to the central act and image of Christianity to be found among within modern art. While the collection of his works at Kettle’s Yard focuses instead on city and landscapes, we are fortunate to have a substantive collection of work in the UK by this overlooked and misunderstood artist who, as Congdon: American Modernist Abroad has demonstrated, is ripe for re-evaluation.

William Congdon was born in Rhode Island, USA, and studied at the Pennsylvania Academy of Fine Arts. He began to paint whilst studying English and Spanish literature at Yale University. Following war service as an ambulance driver in Africa and Italy, Congdon returned to New York, where he began to paint semi-abstract landscapes and urban scenes. In 1950 he returned to Italy, accompanied by Kettle’s Yard creator Jim Ede, and painted intensively in Venice and Rome. In the late 1950s, he settled in Italy and converted to Catholicism, and there is a persistent spiritual element underpinning his art. He lived in Assisi in the 1960s and 1970s, painting a series of pictures of Venice and Subiaco. From 1979 he lived in a monastery in Gudo Gambaredo, near Milan where he died in 1998. – Biography Courtesy Kettle’s Yard