Wolfgang Laib is an unusual artist: infused with the natural world and Eastern philosophies, he has made consistent and relatively unchanging use of his favoured materials for fifty years, resisting the conventional view of how an artist should develop. He is perhaps best known for his ‘Milkstones’, pure rectangles of white marble made complete with a surface of milk, and for his installations of the pollen which he harvests by hand close to his home in a village near Biberach in southern Germany. Laib’s current London show at Thaddaeus Ropac presents sculptures of three other long-favoured materials – beeswax, brass and rice – together with a room of works on paper.

You didn’t have formal art training. Is that important for your art?

Very much… if I hadn’t studied medicine for six years, I never would have done what I have in art. I like to say I didn’t change my profession, I set out with the ideals to study and help humanity. So I feel I do with my artwork what I wanted to do as a doctor. Yet medicine is about the physical body, and though it can do incredible things, I felt that art could go further to include everything.

You’ve said that ancient Chinese philosophy, especially that of Laozi, is a significant influence. Does his thinking, such as the preference for ‘non-action’, for collaborating with the natural order, feed into your work?

Yes, that’s how I see things… Laozi says the less you do, the more – as everything is already done. It’s a very simple but very serious approach, the opposite of our society’s way of striving for achievement. 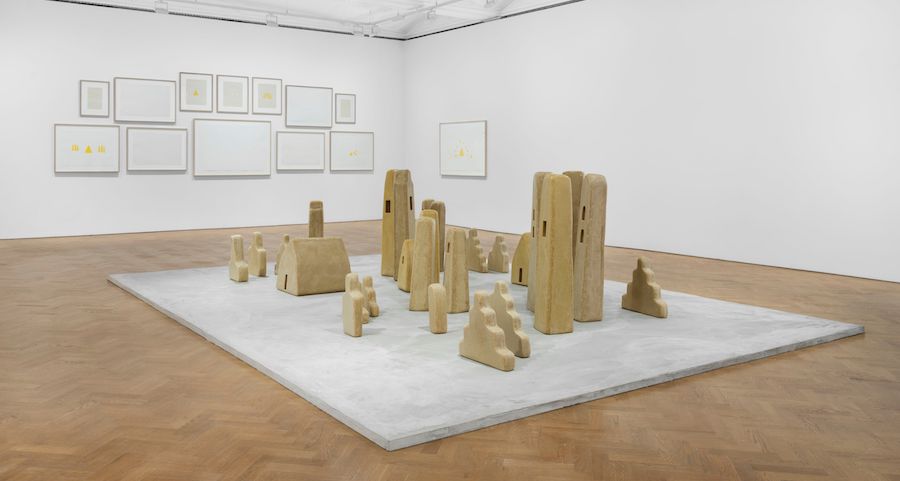 You also have a close relationship to India?

I have a long connection with India, my father became very interested in Tantric art: he said the abstract drawings looked like Mondrian, but 400 years earlier – so he wanted to travel to where they were from. My thesis at University was on the purity of drinking water in India. And for sixteen years now I’ve had a studio outside a small village in the south of India. I am, I think, the only western artist with such a studio, because the bureaucracy makes it very difficult to arrange.

I know you spend a lot of time harvesting pollen. Do you also keep hives to obtain the beeswax you use?

One beekeeper would probably have 5-7 kg of wax left over in a year, but here I have around 200-300 kg. For one of the walk-in chambers I might use 2,000-3,000 kg – and I’ve just made a 40 metre long corridor installation for Anselm Kiefer which uses six tonnes of beeswax. I work with a candle factory close by in Germany, or else it would be impossible to obtain so much. You can buy commercial beeswax, which is purified and lacks the qualities I like … when it contains still a lot of pollen.  I had to learn how to use it, which isn’t easy, and has rarely been done – if you think of previous examples, such as Medardo Rosso’s wax sculptures, you find they are made of plaster covered with just a thin layer of beeswax. My works are only beeswax, there’s nothing underneath it, and that is not so easy technically.

I like the aroma. And the golden colour. In natural light it loses most of that colour and becomes a little transparent, but I realised that if you show it in artificial light, the colour stays. Most of all I like that beeswax, like pollen or rice, is a material far beyond me and beyond European culture. It’s like the difference between a blue painting and the sky: the sky is much more than a blue painting, and my pollen squares are much more than yellow paintings.

You are presenting ‘City of Silence’ – beeswax houses, towers and ziggurats. How did that come about?

They come from a dream in which I saw a medieval tower in Italy, surrounded by an abandoned village, and I was so in love with this tower I am still dreaming of making it as an artwork 20 metres high. I have made smaller towers:  I call them ‘Towers of Silence’ – after the structures built by Zoroastrians in Iran. 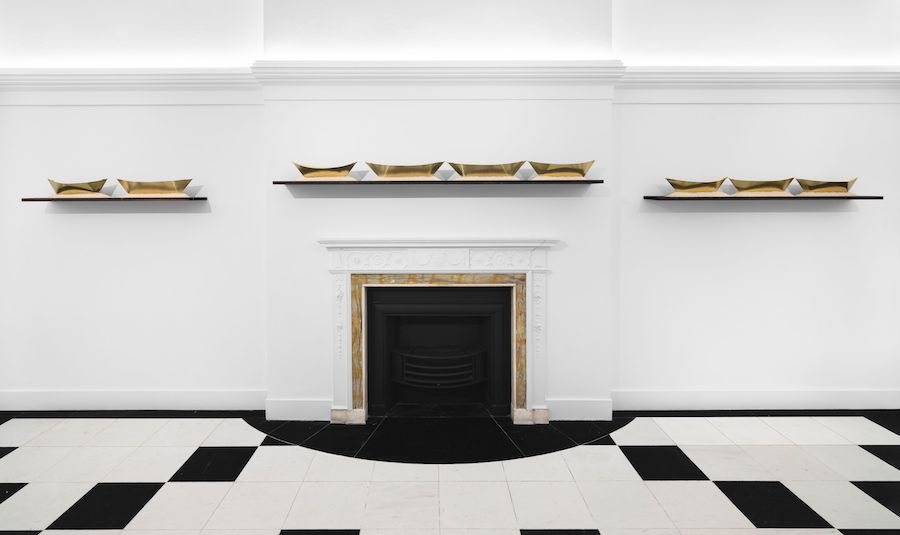 You are also showing boats in a sea of rice. How are they made?

Originally I made boats out of beeswax, sometimes very large, installed in rows on a wooden scaffolding, up to 20 m long. More recently I’ve made small boats from brass, which I cut myself and fold like paper. I’ve shown them on the floor, or on shelves as here. I always put them in a row of rice, else they would fall over. I have used rice over many years as a symbol of nutrition, and not only for the physical body. As long ago as 1983 I made the pieces ‘the sixty-three rice meals for a stone’ and ‘the rice meal for the nine planets’ – rice is universal, it is not only for me to eat.

Do you worry about repeating yourself by making similar work over a long period?

I feel uncomfortable with the art world’s desire for new work – new work – new work. I’m very content if I can make today a milkstone which I made forty years ago. If Mondrian had made a painting every day, we wouldn’t look at them at all anymore. In the exhibition I have one room of drawings made over many years, some of which I hadn’t seen for a long time: I was pleased to discover one drawing twenty years old with an image of a beeswax tower I’ve made this summer. Art is not a fashion show.

I think it is a serious life, and I am searching for a content beyond the material world. I have studied Sanskrit. Gandhi is important to me. I have been very interested in Jainism, which is much more radical than Buddhism – in its emphasis on non-violence. Jain monks walk with a brush to clear the space in front of them to avoid treading on insects; they eat before dark lest they don’t see any insects on their food; they put a cloth below taps to filter out any insects in the water. And I like Jain art… the figures are always the same, there is no individual expression. But I am not a Buddhist and I never became a Jain. My religion is art.