Mr and Mrs Andrews is arguably Gainsborough’s most famous painting. A young couple poses for their wedding portrait beneath an oak tree. Behind them spreads a bucolic view of the valley of the River Stour and the nearly 3000 acres that belonged to Robert Andrews.

He and his wife, Frances Mary Carter had been promised to each other as children and were married on November 10, 1748. He was 22 and she was 16. But this was no love match. Rather, it was a business transaction between two families. In a world where before the widespread existence of big business, alliances between families were made to protect wealth. Though apparently members of the landed gentry, the Andrews family were, in fact, self-made parvenus and had neither peerage nor noble blood.
It’s believed that the bulk of the Andrews fortune came from property rental income. Andrews senior had also made money by high-interest loans lent to those in need of capital. Even the prince of Wales, it was said, was £30,000 in his debt. And he owned ships that traded with the colonies. By implication, these must have been involved in some way with the slave trade. To give his son a foot up into the aristocracy, he bought an estate, arranged the marriage to Miss Carter. The bride’s family had built a fortune in the drapery business and used the Andrews’ family wealth to protect their textile mills from collapse. The place in Frances’ lap remains unfinished, presumably so the artist could add a child (a future peer) at a later date. 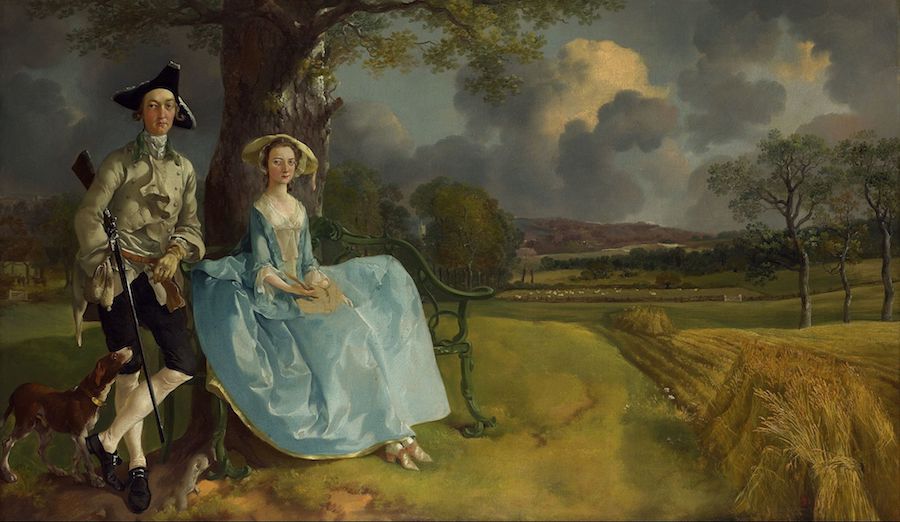 It has often been said of the painting that it is a ‘triple portrait’ of Robert Andrews, his wife and his (not their) land. Surrounded by the Essex countryside, with the fertile, well-stocked fields, the painting is an evocation of money, possessions and power, an illustration of the English class system.

‘triple portrait’ – of Robert Andrews, his wife and his land.

Behind Mr and Mrs Andrews is a wide view looking south. Gainsborough has displayed his skills as a painter of convincingly changing weather and naturalistic scenery, which was still a novelty at this time. 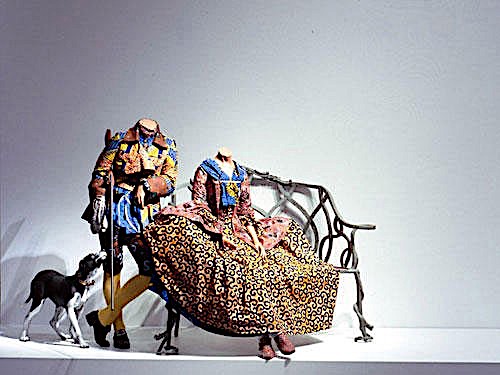 The unpainted patch on Mrs Andrews’s lap may have been reserved to later paint a baby. Surrounded by the beauty of the woods and clouds of the Essex countryside, self-consciously posing beside their fertile harvest field and well-stocked pastures.

Wit, playfulness and biting satire are the hallmarks of Yinka Shonibare’s. Born in the UK to Nigerian parents who returned to Lagos when he was three, he re-located to London at the age of 17 to study art. When at art school, a tutor asked why he didn’t make more ‘African’ art. But what did that mean for a middle-class Nigerian Londoner brought up between two cultures? As an ‘artist of ‘African origin’, he has said that… ‘there is an expectation that I am still connected to traditional African art’ but that, he suggests, would be as odd as expecting French or English artists to be exclusively influenced by medieval art.