The 2017 Canadian Biennial opens today at the National Gallery of Canada. More than 100 recent acquisitions of Canadian and Indigenous contemporary art – including, for the first time, international artworks by more than 50 artists are on display from 19 October 2017, to March 18, 2018.

The fourth of the Gallery’s Biennial exhibitions that present selected recent acquisitions of Canadian and Indigenous contemporary art, the 2017 edition also includes international artworks for the first time. The exhibition features over 50 artists and more than 100 works covering a diverse spectrum of contemporary production from painting, sculpture, and photography, to the drawing, printmaking, video and large-scale mixed media installations.

Running through March 18, 2018, the Biennial visualizes a current moment in art-making as viewed through the filters of the Gallery’s national collection and the research, travels and dialogues of curators working in the departments of Contemporary Art, Indigenous Art, and the Canadian Photography Institute. All of the works in the exhibition were acquired by the Gallery through purchase or donation between April 2014 and June 2017. The 2017 Canadian Biennial is generously supported by RBC Foundation. 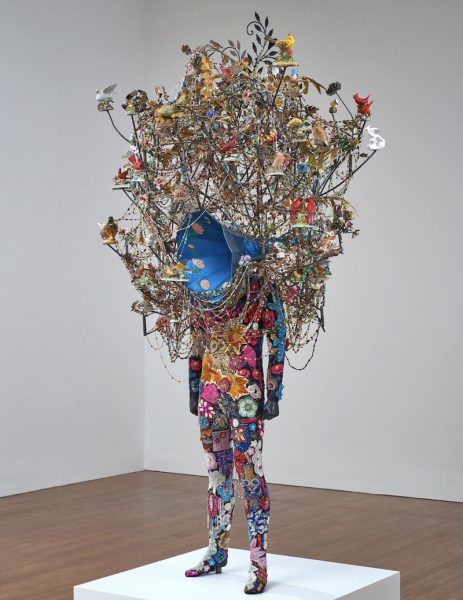 The exhibition begins with an incisive yet comedic engagement with a past century of Western art-making as encountered through Kent Monkman’s 2015 video and mixed-media installation Casualties of Modernity (2015). Paintings by Mickalene Thomas and Cynthia Girard-Renard, a textile by Shannon Bool, and a large collage by Wangechi Mutu are also featured in the opening room of the exhibition. Together, their works introduce numerous critical, political, aesthetic, and material threads that run throughout the exhibition, in works such as Stan Douglas’ compelling six-hour meander into an Afrobeat jam session in Luanda-Kinsasha (2013), the late Kwakwaka’wakw artist, activist and hereditary Chief Beau Dick’s celebrated performative masks, Nick Cave’s enchanting Sound Suit (2015), borne from the horrors of racialized violence, to Latifa Echakhch’s sculptures and paintings that reconcile personal narratives against broader cultural or nationalistic norms and expectations. The many Canadian, Indigenous and international contemporary artworks on view in the 2017 Canadian Biennial offer forms of worldly engagement between Canada and the global histories within which the complex fabric of the nation is connected.

A number of the Canadian artworks on view received their initial reception outside of the country, for example, Shelagh Keeley’s 75-foot long wall drawing German notes / after Lucretius / de rerum natura (2013), originally conceived for the Museum Abteiberg, Mönchengladbach, Germany. Also making a Canadian debut is BGL’s massive sculptural installation Canadassimo (Dépanneur) (2015), created by the Quebec artist group in 2015 when they represented Canada at the “Olympics” of the art world, the Venice Biennale.

“RBC is proud of our ongoing support of the National Gallery of Canada’s biennial exhibition and delighted to celebrate the eclectic and thought-provoking selection of contemporary works,” said Valerie Chort, Vice-President, Corporate Citizenship, RBC. “This year’s exhibition is an extraordinary testament to the increasingly global nature of contemporary art in Canada and how it engages and connects us all.”

Another first for 2017, the Biennial presents a collateral component titled Turbulent Landings: The NGC 2017 Canadian Biennial at the Art Gallery of Alberta, in Edmonton, as part of the NGC@AGA program, on view until January 7, 2018. This initiative, a first for the Canadian Biennial, addresses the Gallery’s mandate to make the national collection known and accessible across Canada. Turbulent Landings places issues of land, and the consequences of “landings” – of colonialism, slavery and other forced migrations – into focus through recently acquired works by John Akomfrah, Mark Bradford, Beau Dick, Julie Mehretu, Chris Ofili, Wael Shawky, and Hajra Waheed.

Associate Curator of Contemporary Art, Jonathan Shaughnessy, is the lead curator for the 2017 Canadian Biennial. He was also co-curator with Catherine Crowston, Executive Director and Chief Curator, Art Gallery of Alberta, and Josée Drouin-Brisebois, Senior Curator of Contemporary Art, National Gallery of Canada, for Turbulent Landings: The NGC 2017 Canadian Biennial.

The Canadian, Indigenous and international artists whose works are comprised in the 2017 Canadian Biennial across both venues are:

The 2017 Canadian Biennial is accompanied by a bilingual catalogue. Published by the NGC, the bilingual 334-page volume features a foreword by the Gallery’s Director, Marc Mayer, an essay by Associate Curator of Contemporary Art, Jonathan Shaughnessy, and entries by the curators of the departments of Contemporary Art, Indigenous Art, and the Canadian Institute of Photography. It also includes the complete list of works acquired by the Gallery since 2014 The catalogue is on sale at the Boutique for $40 as well as at ShopNGC.ca, the Gallery’s online boutique.