Barkley Hendricks the well known African American painter and photographer who evoked the spirit of everyday Black People, in his life-size portraits has died age 72. Some of his work will be exhibited in London at Tate Modern’s upcoming exhibition ‘Soul of a Nation: Art in the Age of Black Power‘ 12 July – 22 October 2017 at Tate Modern’s Boiler House.

“He was a situational painter, documenting the world around him in vivid and highly detailed paintings that capture the distinctive personalities of his subjects.”

Hendricks’ death was confirmed by Jack Shainman, the art gallery that has represented him since 2005. Barkley L. Hendricks was a painter and photographer best known for his realist and post-modern portraits of people of color living in urban areas beginning in the 1960s and 70s and continuing to the present. Trevor Schoonmaker, the organising curator for Hendricks’ traveling exhibition Barkley L. Hendricks: Birth of the Cool said, “His bold portrayal of his subject’s attitude and style elevates the common person to celebrity status. Cool, empowering, and sometimes confrontational, Hendricks’ artistic privileging of a culturally complex black body has paved the way for today’s younger generation of artists.” His work remained politically charged until the end. 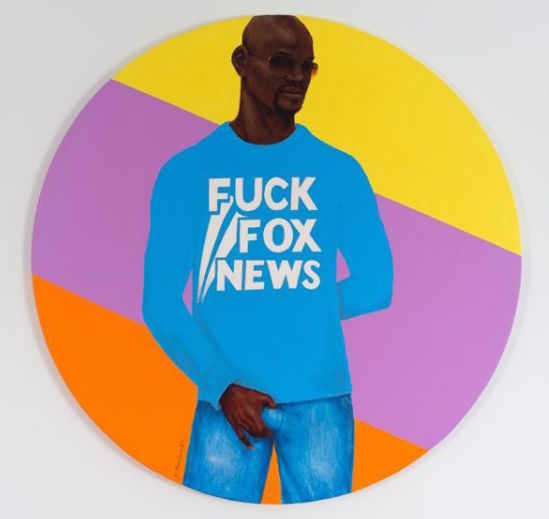 Janet Koplos wrote in a 2008 Art in America feature of Hendricks, “Almost without fail, Hendricks catches such sensitive indications of character in his portraits, and often with very mixed messages. His 1977 Brilliantly Endowed (Self-Portrait) presents him partly—strategically—undressed (the title, the catalogue notes, both touts and mocks a phrase from a Hilton Kramer review of his work). This is not a classical nude but a man with only the most central of his clothes off, which thus contradicts the conventions of heroic or romanticized figures. Hendricks is willing to violate his own privacy; the “undressed” quality is emphasized by the amount of personal ornament he still wears.” “Fashion is a situation we all find ourselves in every day when we wake up and have to put on clothes,” Hendricks said in a Women’s Wear Daily article about his (2013) exhibition Heart Hands Eyes Mind.

Hendricks was born in Philadelphia, Pennsylvania, and lived and worked in New London, Connecticut. He earned both his BFA and MFA from Yale University and was the subject of a large-scale traveling exhibition, Barkley L. Hendricks: Birth of the Cool, organized by Trevor Schoonmaker at the Nasher Museum of Art, Duke University, Durham, North Carolina (2008), which traveled to the Studio Museum in Harlem, New York (2008-2009), Santa Monica Museum of Art, California (2009), Pennsylvania Academy of the Fine Arts, Philadelphia (2009-2010) and the Contemporary Arts Museum Houston, Texas (2010).

Hendricks’ focus on Black subjects was cemented when he toured Europe during his undergraduate years in the mid-1960s. Drawing on the spirit of the rising Black Power Movement of the time, Hendricks began creating bold portraits of Black men and women—relatives, friends, even strangers—that communicated the effortless cool, sophisticated and singular fashion and, even more, an inherent pride of Black Americans.

He passed away in New London, Conn., from a reported cerebral haemorrhage, according to The New York Times. Hendricks is survived by his wife of 34 years, Susan Hendricks.