Array Collective, has won the Turner Prize 2021. It was announced this evening at a ceremony at Coventry Cathedral, in partnership with Tate and Coventry UK City of Culture 2021. The £25,000 prize was presented by Pauline Black, the lead singer of 2 Tone pioneers, The Selecter, during a live broadcast on the BBC. A further £10,000 was awarded to each of the other nominees. This year the Turner Prize exhibition is being held at the Herbert Art Gallery & Museum in Coventry as a highlight of its City of Culture year.

Originating at Tate Britain, the Turner Prize regularly travels to other venues in the UK

The jury awarded the prize to Array Collective for their hopeful and dynamic artwork which addresses urgent social and political issues affecting Northern Ireland with humour, seriousness and beauty. The jury was impressed with how Belfast-based Array Collective was able to translate their activism and values into the gallery environment, creating a welcoming, immersive and surprising exhibition. The jury commended all five nominees for their socially engaged artworks, and how they work closely and creatively with communities across the breadth of the UK. The collaborative practices highlighted in this years shortlist also reflect the solidarity and generosity demonstrated in response to our divided times. 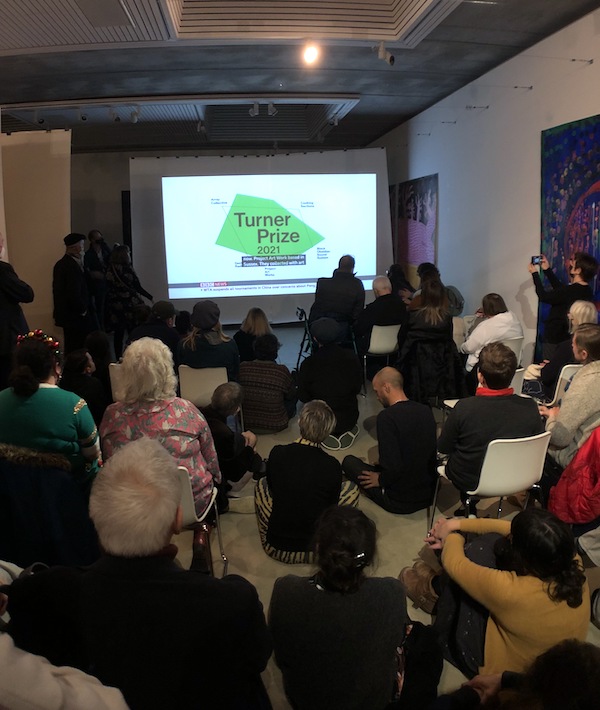 The exhibition is a highlight of Coventry’s UK City of Culture 2021 celebrations. Herbert Art Gallery and Museum champions Coventry’s culture, city and arts and is one of the UK’s leading regional museums. As part of its preparations for City of Culture 2021, the museum underwent a major redevelopment of its gallery spaces in anticipation of the Turner Prize 2021 exhibition. In parallel to the Turner Prize exhibition, Coventry also hosts ‘Coventry Biennial 2021: Hyper-Possible’ across Coventry and Warwickshire.

Established in 1984, the prize is named after the radical British painter JMW Turner (1775-1851). Originating at Tate Britain, the Turner Prize regularly travels to other venues in the UK. It has previously been shown in Liverpool in 2007, Gateshead in 2011, Derry in 2013, Glasgow in 2015, Hull in 2017, and Margate in 2019. In 2022 it will be held at Tate Liverpool to mark 15 years since the prize was first held in the city as part of the European City of Culture celebrations. The members of the Turner Prize 2022 jury will be Irene Aristzábal, Head of Curatorial and Public Practice, BALTIC; Christine Eyene, Research Fellow, School of Arts and Media, UCLAN; Robert Leckie, Director, Spike Island; and Anthony Spira, Director, MK Gallery.

The Turner Prize 2021 is supported by the AKO Foundation, Avanti West Coast and Arts Council England, with additional support from ArtAV, The John Browne Charitable Trust and The Uggla Family Foundation.

Array Collective is a group of 11 artists who create collaborative actions in response to socio-political issues affecting Northern Ireland. The collective has been working together more actively since 2016, motivated by the growing anger around human rights issues happening at the time. Their intention is to reclaim and review the dominant ideas about religio-ethnic identity in Northern Ireland. Working as constituents or allies of the communities they protest with and make art about, Array Collective aims to create a new mythology for the growing number of people who do not prescribe to embedded sectarian dichotomies.

Black Obsidian Sound System (B.O.S.S.) is a London-based collective that works across art, sound and radical activism. Formed by and for QTIBPOC (Queer, Trans and Intersex Black and People of Colour) in Summer 2018, B.O.S.S. challenges the dominant norms of sound-system culture across the African diaspora through club nights, art installations, technical workshops and creative commissions.

Cooking Sections is a duo based in London. Established in 2013, their practice uses food as a lens and tool to observe landscapes in transformation. Their work investigates the impact of humans on this planet, and asks how we can adapt infrastructure and the built environment to ensure a thriving future.

Gentle/Radical is an artists-and-others-run project established in Cardiff in 2016. The organisation was formed through a commitment to art, creativity and culture as tools for social change. Gentle/Radical deliberately work in community contexts rather than mainstream cultural spaces to enable those routinely excluded from the arts to be met where they are. Above all, they are interested in asking questions about how power works, how to transform how power works, and how culture can better centre justice.

Project Art Works is a collective of neurodiverse* artists and makers based in Hastings. Established in 1997, they share an expanded idea of art created through collaborative practice with, for and by neurominorities. Through advocacy and activism in culture and care they seek to ensure that people with complex support needs have agency in their civic and creative lives.

* Neurodiverse is a term used to acknowledge different states of understanding and living in the world. Neurodivergence and neurominorities are terms that embrace autistic people and/or those who have learning or intellectual disabilities.

The exhibition of the five shortlisted collectives at The Herbert Art Gallery & Music continues until 12 January 2022. Entry is free.