Arts Council England has published the 2017/18 Cultural Gifts Scheme and Acceptance in Lieu annual report which shows that in the last year, 42 cases – spanning a vast range of works of art and other cultural objects worth £27 million – were accepted for the nation under the government’s Cultural Gifts Scheme and Acceptance in Lieu Scheme. Objects taken through these schemes are allocated to public collections throughout the UK and are available for everyone to engage with and enjoy. This figure is down by over 1/3 from 2016-2017 which saw a similar amount of higher value cases (44) resulting in £40m in gifts accepted. In the last decade the schemes have brought over £330 million worth of cultural property into public view.

Since the introduction in 2013 of the Cultural Gifts Scheme just under 40 cultural gifts have been accepted, which have resulted in nearly £16 million-worth of significant cultural property being brought into UK public collections. This is a remarkable achievement for a scheme which is, essentially, still in its infancy. Its contribution to the UK’s philanthropic landscape, regarding the breadth of items, accepted and the number of public institutions across the country which have benefitted, is cause for celebration. We recognise, however, that there is always room for improvement and have put forward some suggested amendments to the scheme to our colleagues in government. The Panel would welcome feedback on the scheme and would like to hear from stakeholders concerning their experiences and any thoughts as to how the scheme might be improved. Please contact the Secretariat to the Panel. Both schemes are administered by the Arts Council on behalf of the Department for Digital, Culture, Media and Sport (DCMS)

The Cultural Gifts Scheme enables UK taxpayers to donate important works of art, historic or scientific objects to the nation. In return, donors will receive a tax reduction based on a set percentage of the value of the object they are donating – 30% for individuals and 20% for companies. Since the scheme was introduced by the UK Government in 2013, cultural gifts have steadily become an important part of the UK’s cultural philanthropic landscape. 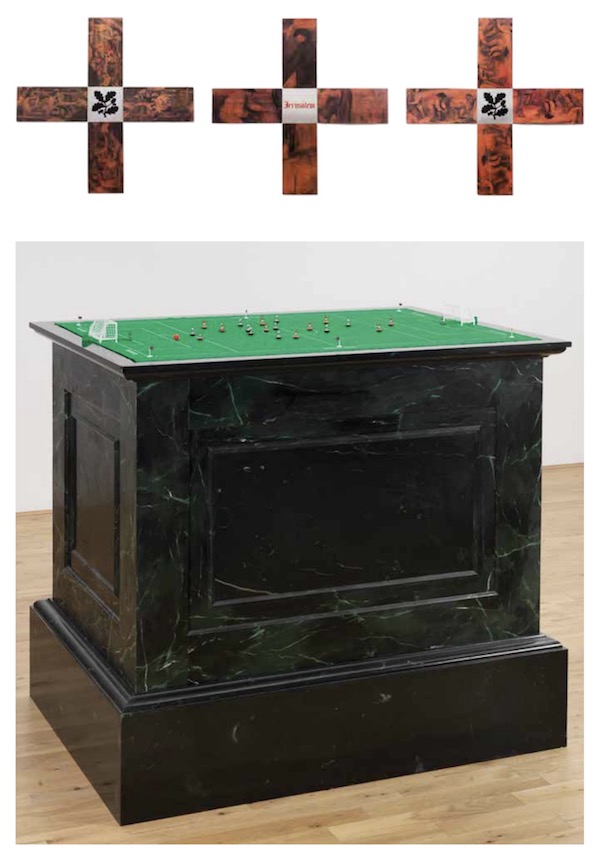 Mark Wallinger Gifted to the Nation

It has been another hectic and fruitful year for Acceptance in Lieu (AIL). The volume and quality of material accepted remains at an all-time high and illustrates perfectly why the scheme is regarded as one of the most important sources for UK museums, galleries and libraries to acquire essential works.

“Once again, it gives me great pleasure to see so many important works of art, manuscripts and archives coming into public ownership through Acceptance in Lieu (AIL) and the Cultural Gifts Scheme (CGS). The acquisitions detailed in this report are typically diverse and span contemporary art, Old Masters, ceramics, glass, sculpture, toy theatres, tapestries and clocks as well as literary, film and architectural archives
and estate papers. They will make a significant contribution to the nation’s collections and, in turn, the development and prosperity of the communities that the recipient organisations serve. Acquisitions are a source of celebration, inspiration and a focus for us as communities, underlining the value of arts and culture in people’s lives. I am particularly pleased to see that the whole of the UK has benefitted from
these major schemes, with nearly 85 per cent of the total tax settled through the acceptance of items in 2017/18 met by items allocated to institutions outside London. Furthermore, the list of first-time allocatees in the regions continues to grow. The White House Cone Museum of Glass in Stourbridge, currently undergoing a major development thanks to a Heritage Lottery Fund grant, will house one of the finest collections of 18th-, 19th- and 20th-century glass in the world and will make the ideal home for the Pilkington glass collection. Lord Richard Attenborough’s papers have been allocated to the University of Sussex, an institution with which the late film director had a 40-year association. Other first-time allocatees include the Centre for Buckinghamshire Studies, the Fashion Museum, Bath, the Paul Mellon Centre for Studies in British Art, London, the Royal West of England Academy, Bristol, and the Royal Academy, London. I would like to express my gratitude to Edward Harley, the Chair, and members of the Acceptance in Lieu Panel, and the many expert advisers listed at the back of this report, whose unstinting work ensures the schemes work properly and have the trust of offerors, professional advisers and recipient organisations.” – Sir Nicholas Serota