Matthew Burrows’ first solo exhibition since the launch of the Artist Support Pledge has opened in Wellington Arch, London. His internationally successful initiative created a micro-economy that has generated tens of millions in sales for artists through Instagram and related activity since its inception in March 2020.

This latest show includes new, larger-scale works, the fruition of his development of his In and Through series, which he developed during the COVID pandemic. These paintings reflect Burrows’ interest in connection ‘… to ourselves, one another, and our environment… and the conditions in which we all might thrive. Burrows lives and works in the East Sussex countryside, his studio overlooking the Tillingham valley and Beckley Wood, an Area of Outstanding Natural Beauty from which he also directs the Artist Support Pledge movement. The artist describes his relationship with habitat as “… one of dwelling, imagination, and ritual, rather than description or nostalgia. It is a process of mythologising, drawing meaning from the environment’s particularities and my movement in and through it. I want a painting to open up the rich complexities of our nature/s by the most direct means possible”.

The titles of the exhibited works echo Burrows’ preoccupation with the experience of landscape: Lineament, Sternō, Shataph, and Gatescape. Collectively, they suggest a mapping of nature, an attempt to understand a relationship of interdependence. Burrows’s concerns about the societal failure to connect the heart with culture were part of the genesis behind the Artist Support Pledge. “Our failure to be natural is an exposure of our human folly. Nature is not to be controlled, but to be lived in and through to be understood within a broad ecosystem”.

Burrows sees himself as a joint maker at the crossroads and intersection of pattern and imagination, ritual and prophecy, presence and contingency. The fluid layers of thinned paint are held in tension between the vertical and the horizontal. For him, the horizontal is the realm of the imagination and the vertical is bound by repetition and ritual. It is the tension between these two where the dynamics within each painting exist, not as an either/or but as an acceptance of their codependence. ‘Imagination without ritual becomes meaningless, whilst ritual without imagination loses a sense of vitality and life’ says Burrows.

Burrows says about the making of the work and his unusual use of natural fibres: “The paintings are made on jute and burlap, and the coarse open weave gives a tactile surface on which the layers of thin paint are brushed, washed and poured. These paintings are made in thin layers in alternating colours. The coarse burlap and jute create a rough texture and an open weave, resisting mechanical perfection and symmetry.

I developed the motifs from drawings of the landscape around my studio. These are combined with images of gates, fences, electrical pylons, and industrial environmental interventions. The process of redrawing and painting creates an entropy of these structures until they combine with the forms of the landscape, creating skeletal patterns. I see these as visual mantras inviting meditation, taking the landscape from a view to look at to an experience of being. ”

Matthew runs around 70 miles In and Through his local landscape on a good week. 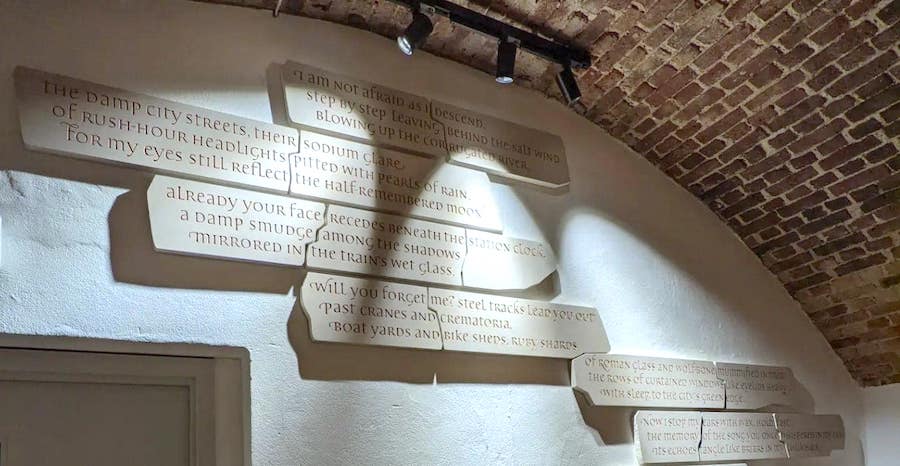 It’s some twenty years since the renovation of the South Bank when the late Brian Avery of Avery Architects commissioned me, along with the Arts Council and the BFI, to write a poem for the underpass that leads from Victory Arch at Waterloo Station to the IMAX cinema. As The Poetry Society’s only ever Public Art Poet, it was a dream commission. But how do you write a tunnel-length poem and what subject do you choose? The brief was to make people comfortable walking down a rather dank and smelly underpass. Written in a series of three-lined stepped stanzas, it was set out so it could be read whilst walking through the tunnel, making walkers feel safe in one of London’s most dismal pedestrian walkways. Using the metaphor of Eurydice descending into the underworld, it drew on classical myth whilst referencing London’s Thameside history and the famous Waterloo clock, a meeting point in so many British films. The longest public art in the capital was initially painted along both sides of the tunnel like song and echo. Its font, “Disturbance,” was designed by Jeremy Tankard in consultation with me. We wanted something that looked both archaic yet modern.

Ten years after its installation, my then publisher, Salt, discovered that the poem had been obliterated, just weeks after Time Out had named it one of London’s best secret art pieces. Network Rail contractors who were ‘just tidying up the tunnel’ had painted it over in swimming pool blue. Rather ironic as one of the lines is, ‘I am drowning in blue. A Facebook campaign, Put the Poem Back in Waterloo Underpass, attracted well over a thousand signatures and demanded it be reinstated. Tributes poured in from, amazingly, as far afield as Canada and the States. Its message of the triumph of hope, as Eurydice descends into the underworld leaving the London landscape of sodium streetlights, train tracks and the Waterloo station clock, declaring “I am not afraid”, so moved people that one man proposed in front of it, and a mother visiting her dying daughter in a nearby hospital was comforted daily by its words. A humbling experience for a poet.

Money poured in, and a lawyer volunteered to undertake, free of charge, the months of legal negotiations needed with Network Rail to have it restored. A software firm, Neural Technologies, topped up the public donation. The poem was finally stencilled back (on one side of the wall) by James Salisbury of the City and Guilds of London art school. As an example of innovative public art, it’s been written about in architectural journals. It was the subject of an essay the Poetry Society commissioned from me on poetry as public art, Opening Spaces. It has formed the backdrop to a National Film School production, Will You Forget Me? (Stephen Bennet) and Lifelines, a Channel 4 drama produced by Carnival films. The poem has been requested on Radio 4’s Poetry Please and has been the subject of an American academic’s PhD. It was also set to music by Louise Drewett and performed by a Waterloo choir.

But recently, yet again, the poem faced the prospect of obliteration with the further development of the South Bank. Yet thanks to the developers HB Reavis and Canon Giles Goddard, this fragile artwork that was in danger of wandering like a lost soul is being given a permanent home in the beautiful St. John’s Church, Waterloo. A historic Grade II building in the Anglican Greek Revivalist style built in 1822, it has undergone a £5.5 million restoration to function as a place of worship, a meeting place and an events space. Beautifully hand-carved in fragments of Purbeck stone that suggest archaeological fragments, it took the letter cutter and artist Gary Breeze two months to produce the thousands of letters needed. Now Eurydice has found a final resting place and home in the crypt of this beautiful church and will, hopefully, continue to provide emotional succour for generations to come. – Sue Hubbard 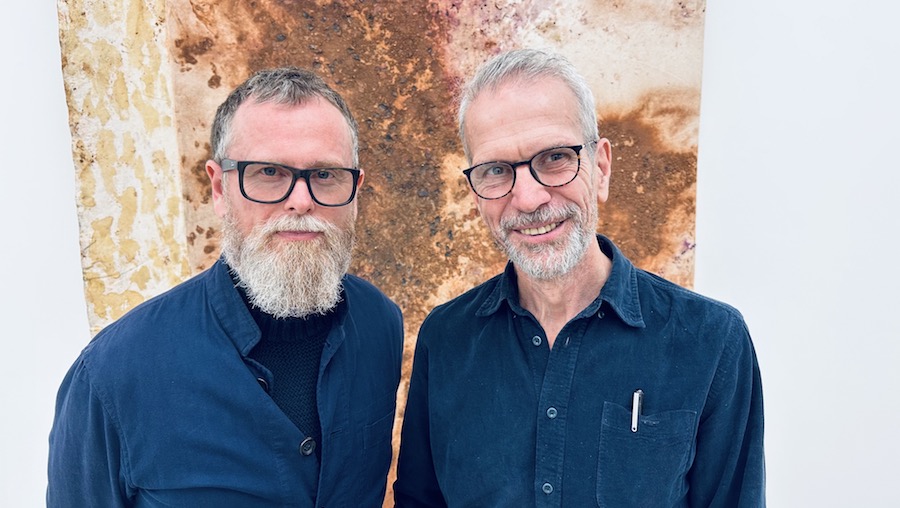 Zavier Ellis (curator, dealer, and artist) and Mathew Gibson (educator and artist) began the journey several years ago in response to the rising cost of formal art education. Identifying an affordability crisis in the art school system, they set about creating a new, affordable solution. Having witnessed the acceleration of online activity during the Covid pandemic, including virtual exhibitions, social media initiatives such as Artist Support Pledge, and delivery of education from primary school to art school, Ellis and Gibson decided that Contemporary Art Academy had to be an online project. As Mathew Gibson states:

“We decided we wanted to provide the highest quality education at the lowest possible price to give as many artists as possible the opportunity of improving their practice and critical awareness. To achieve this going online was the only option”.

Channelling their combined experience of running galleries, residencies and educational programmes, Ellis and Gibson set about writing courses designed for practicing artists wanting an alternative to postgraduate study or a top-up. Crucially, professional practice is woven into the DNA of the project. As Zavier Ellis states:

“Being an artist is one thing, but operating as a professional artist is another. Of course, we want to help artists improve their practice, but we also want artists to learn how to prepare, organise and execute their plans in a professional way. Making is one part of the process – the next is showing”.

They are also confident about the quality of teaching on offer. With their extensive networks, Ellis and Gibson have access to a large pool of artists, journalists and artworld professionals to call on. Via these networks, they were recently invited to curate an exhibition at Saatchi Gallery, where they presented Contemporary Art Academy alumni and faculty together. Saatchi Gallery is a fitting location, with its history of democratising access to art and ongoing emphasis on innovation.

So, what next for Contemporary Art Academy?

“Having had a phenomenal response to the courses we have run so far, we launch officially with our three-part, first-tier offering in January ’23 (registration is open!). Then we will build out our offering with the mission of providing online art education for all”, says Ellis.

DELTA GAMMA, curated by Zavier Ellis, is at Saatchi Gallery through November 18th, 2022.