The American contemporary painter, printmaker, sculptor, and draughtswoman Susan Rothenberg has died age 75. She was best known for her iconic images of horses in which she melded abstraction with representation.

Rothenberg was born in 1945 in Buffalo, New York. She received encouragement from her father to become an artist and paid visits to the city’s Albright-Knox museum. After graduating from Cornell University in Ithaca in 1967, she went to the Corcoran School of Art but left after two weeks. Following what she later described as a “lost” year, she returned to Buffalo and then planned to head to Nova Scotia. Then, at the last minute, she reversed course and ended up in New York, where she later married artist George Trakas, whom she met while performing in a piece by Joan Jonas. In 1979, they divorced. Rothenberg married the artist Bruce Nauman in 1989, and moving to a 750-acre ranch in Galisteo, New Mexico, near where Georgia O’Keeffe and Agnes Martin also lived and worked in 1990.

Rothenberg studied sculpture at the State University of New York. As a dancer and assistant for Joan Jonas and Nancy Graves (from 1970), she became interested in performance art, bridging the gap between minimalist aesthetics and emotional body language

The art critic Calvin Tomkins described their home life in a 2009 New Yorker profile of Nauman: “The Naumans go into Santa Fe now and then, but they steer clear of the thriving art colony there. Non-art activities occupy a lot of their time. They both like to cook. Rothenberg feeds the chickens (they have six), and takes their three mixed-breed dogs on long hikes. She combs the dry hills behind the house for potsherds, arrowheads, and other artifacts of the ruined Galisteo pueblo, where a Tewa-speaking people flourished from the late twelve-hundreds to about 1690, on what is now the Naumans’ land. Her finds fill many drawers and shelves in the house, and she has assembled a dozen or more complete pots. Nauman gets up at seven each morning to feed his fourteen horses, which he breeds, raises, trains, and sells.” 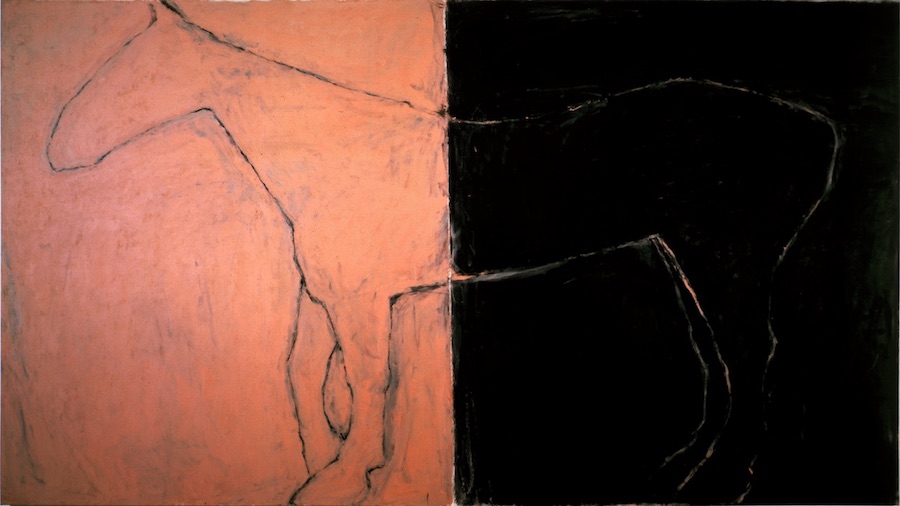 Rothenberg’s first solo exhibition in New York in 1975 was at the 112 Greene Street Gallery. Consisting of three large-scale paintings of horses, it was heralded for introducing imagery into minimalist abstraction, while bringing a new sensitivity to figuration. Critic Peter Schjeldahl called the show “a eureka,” stating that “the large format of the pictures was a gesture of ambition,” and that “the mere reference to something really existing was astonishing.”In 1978, she was included in “New Image Painting” at the Whitney Museum of American Art, New York. Rothenberg had numerous solo exhibitions in the United States and abroad.

In the mid-1970s, Rothenberg was recognised as one of the most innovative independent artists of the period. During an era when minimalism was at the forefront of the New York Art scene, she stood out because of her reintroduction of expression and figuration. Rothenberg’s horse figures of the 70s contained some degree of minimalism because of their repetitive qualities, her hectic yet loose rendering of the figures blended the earlier conventions of abstract expressionism and color field painting. By the early 1980s, she was focusing on disembodied heads and body parts, and by the end of the decade she was painting complex and symbolic figurative works full of color and movement.

At mid-career, she moved to a ranch near Galisteo, N.M. Thereafter her paintings reflected life in the Southwest and became suffused with color. Beginning in the 1990s, she used the ‘memory of observed and experienced events’ (a riding accident, a near-fatal bee sting, and other events) as the inspiration for her subjects and adopted oil paint as her favored medium. As in her earlier works, these paintings are distinguished by thickly layered, energetic brushwork and exhibit her interest in exploring the relationship between images and surface.

In 2010, New York Times art critic David Belcher wrote that comparisons between Rothenberg and Georgia O’Keeffe had “become hard to avoid.” From her early years in SoHo through her move to New Mexico’s desert landscape, Rothenberg has remained as influenced and challenged by her physical surroundings as she is by artistic issues and personal experiences. In addition to her earliest horse paintings, Rothenberg has taken on numerous forms as subject matter, such as dancing figures, heads and bodies, animals, and atmospheric landscapes. Rothenberg’s visceral canvases have continued to evolve, as she explores the boundary between figural representation and abstraction; her work also examines the role of color and light, and the translation of her personal experience to a painterly surface.