The Neo-Geo Artist Ashley Bickerton (May 26, 1959 – November 30, 2022) has died in Bali, after a protracted illness.
Bickerton was a Barbadian-born American, contemporary, mixed-media artist. He often combined photographic and painterly elements with industrial and found objects to create assemblages. He is associated with the early 1980s art movement Neo-Geo.

His gallery Gagosian stated, ASHLEY BICKERTON (1959–2022) It is with great sadness that Gagosian announces the death of Ashley Bickerton, at the age of sixty-three, in Bali, Indonesia. Ashley died from complications relating to ALS. Ashley was a force within the New York art world beginning in the 1980s. Throughout this lifetime, he inspired younger artists and his peers with his unique blend of humour and irony across mediums, including painting, sculpture, and photography. Gagosian was proud to add Ashley to the gallery’s roster earlier this year. We will honour his legacy well into the future, beginning with a solo exhibition of his historical and recent works that we planned together for New York in 2023. 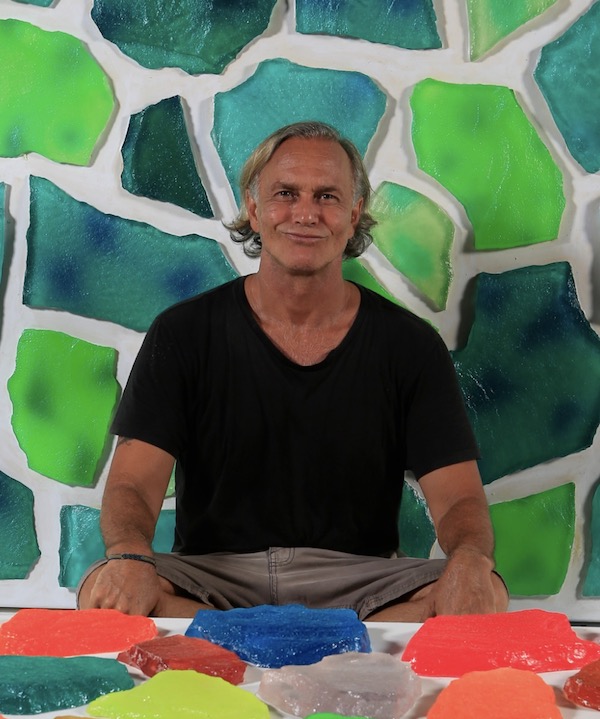 Born in Barbados on May 26, 1959, Bickerton was the son of Derek Bickerton, a linguist and scholar of Creole and pidgin languages. His father’s research work caused his family to move around the globe every several years. As a child, Ashley Bickerton lived in several countries across four continents. The family finally settled in Hawaii in 1972. British by birth, Bickerton became a naturalized U.S. citizen in the mid-1980s. He spent 12 years in New York City, where he established his career before settling on Bali island in 1993.

Bickerton graduated from the California Institute of the Arts in 1982, then moved to New York City to attend the Whitney Museum Independent Study Program. After exhibiting for a few years in New York, he was included in a four-person show at the Sonnabend Gallery in 1986 that included Jeff Koons, Peter Halley, and Meyer Vaisman. In 2004 The New Museum exhibited “East Village USA,” a show that featured “Neo-Geo” artists, including Bickerton.

Over the last twenty-five years of his life, Bickerton exhibited his work internationally and is included in public art and museum collections. His works are held in the collections of the Museum of Modern Art;[8] the Tate;[9] the Fondation Cartier pour l’Art Contemporain, Paris; the Stedelijk Museum, Amsterdam; Berardo Collection Museum in Lisbon, Portugal; the Museum of Contemporary Art, Chicago; and the Whitney Museum of American Art, New York.

In April 2014, Bickerton held his first solo exhibition at Gajah Gallery. The month-long exhibition, “Junk Anthropologies”, marked a new direction for the American master of philosophical funk, where he re-established himself as a master painter in the grand tradition. The focus of the works is on the ongoing corruption of Bali that he witnessed being a resident there, with the styles greatly influenced by Paul Gauguin, for whom he held a perennial obsession.

From April to August 2017, Bickerton had his first U.K. retrospective at Newport Street Gallery in London. Entitled “Ornamental Hysteria” and spanning more than three decades of the artist’s career, the exhibition presented 51 works, many of which were new and previously unexhibited pieces. Amongst the featured works were Canoe, Shark, Woman (2016), a sculpture created in Yogyakarta Art Lab, which The Guardian described as “[having] the look of the ritual artefact of Bickerton’s tropical island obsession, creating a power object or fetish (as islanders do) with found objects (fish, flowers, beads) that is the more hypnotic for its solemn parody – silver vestal offering a hammerhead shark, coconuts in her Indonesian canoe”.

In 2022, Bickerton had two solo shows in New York. His performance at Lehmann Maupin gallery, titled Seascapes at the End of History, includes art objects from his Ocean Chunk series that were first conceived while living in New York City before his relocation to the Indonesian island of Bali in 1993. 56 Henry gallery founder Ellie Rines curated this exhibition and a second show at Jamian Juliano-Villani’s gallery was at O’Flaherty’s on Avenue C. The press release was written by the contemporary artist Jordan Wolfson.

Bickerton’s work explores issues in contemporary art related to the commodification of the art object itself. Often his things are grotesque in a self-aware manner and are often a critique of capitalism.

In the 1980s, Bickerton made a series of works which resembled packing cases and crates covered with corporate logos. His early work is noted for its display of corporate logos and constructions titled either “Self-Portraits,” “Commercial pieces,” or “Anthroposphere.” They are typically Assemblages of technological or industrial materials with the inclusion of found elements and screen-printed iconographic images. These seemingly functional objects without clear purpose are often covered in various logos, technological signage, and codes. His artwork “Abstract Painting for People 4”, made in 1987, is now included in the collection of François Pinault (since 2007). His mixed-media pieces, in collaboration with the Singapore Tyler Print Institute, are “spooky” images of green-skinned creatures emerging from a sea littered with cans and bottles.

Bickerton’s work became associated with the Neo-Geo (or Neo-Geometric Conceptualism) It was primarily sculptural and derived its inspiration from consumerism and industrialisation in the U.S. They can partly be read as a response to decade’s excess. (They were labeled “commodity art” during the ’80s, though the term didn’t stick.) Bickerton developed own personal brand, SUSIE, whose logo he juxtaposed those of companies like Renault, Marlboro, Nike, and Motorola. He called these works self-portraits.

Bickerton’s most recent project was a collaboration with the Yogyakarta Art Lab (YAL). YAL is Gajah Gallery’s major initiative based in Yogyakarta – Indonesia’s up-and-coming art hub – co-founded in April 2012 by Indonesian artist Yunizar and owner of Gajah Gallery Jasdeep Sandhu. This collaboration involved Bickerton creating a series of sculptures which examined what he liked to think of as the “mitochondrial eve”. Originally derived from clay models the artist created in his Bali studio, they were reinvented in Jogjakarta in various archival materials centred on cast aluminium. Jasdeep Sandhu has described these then-new works coming out of YAL as “Some of the more important contemporary sculpture produced in the past ten years.”

Bickerton continued to develop work within his established themes and iconography of tropical surrealism, green-headed characters, and assemblages. His work in 2006 and 2007 comprised large-format digital prints and paintings with thick wooden frame constructions with various inlays. These elements can be seen in “Made’s Warung” 2006 and “Green Head with Inlay 1” (2007).

2014 marked the start of a new Silver Ladies series, manifested in a double portrait of two identical subjects, beautiful young Balinese women, nude except for a floral sash around their hips and coronas of tropical flowers. Their bare skin and dreadlocked hair are painted shiny silver, their lips in vivid colours. The first work in this series is a painting titled 2 C (A)W E2 P.G. 2 T(B) W. The model for both figures is the artist’s Balinese wife, Cherry Saraswati Bickerton, as quoted from the catalogue “Junk Anthropologies” – Ashley Bickerton, written by Jamie James and published by Gajah Gallery.

Bickerton died from complications of amyotrophic lateral sclerosis on November 30, 2022, at the age of 63.