Yesterday a photo appeared on his Instagram and website feeds after a long hiatus. One of the new works depicts a gymnast doing a handstand, incorporating debris, in the heavily shelled city of Borodyanka. The female gymnast is balancing on the damaged building, a sign of optimism and hope.

Other murals have been spotted around Ukraine’s capital Kyiv which has led to speculation the artist was actively working in the war-devastated country. This is the first large body of work in over a year. 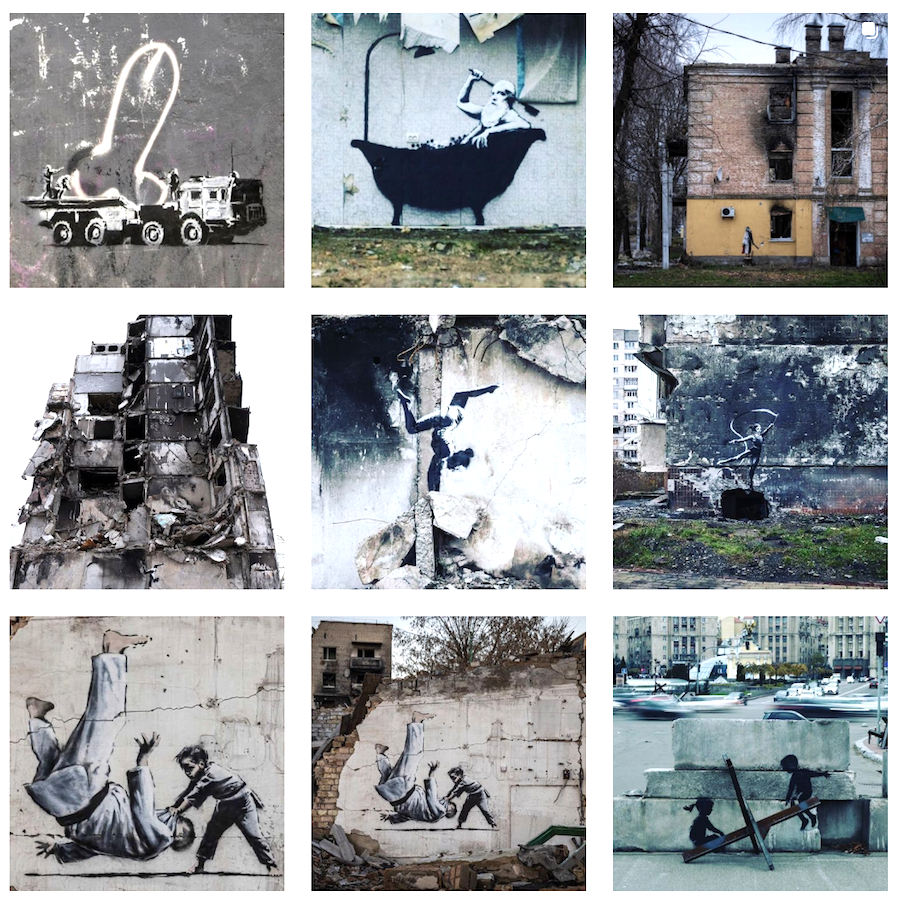 One mural shows a man resembling Vladimir Putin being defeated at Judo by a child. The Russian president is a judo black belt and a noted admirer of martial art. The graffiti artist also posted three images of the gymnast mural in the wreckage left by Russian shelling, with a caption stating, “Borodyanka, Ukraine”. Other works show a Russian tank with penis graffiti, children see-sawing on a blockade, a man in a flat having a bath with no walls so he is exposed to everyone, and a woman standing on a chair holding a fire extinguisher.

Borodyanka has been one of the areas most shelled by Russia’s illegal invasion, which began on 24 February this year. It is located northwest of the capital. Russian troops had occupied the town around 30 miles (48km) northwest of Ukraine’s capital Kyiv for weeks at the beginning of the war before Ukraine forces liberated the area last April.

Banksy is by far the most important Street Artist of his generation. Yet, surprisingly, the British museum establishment has ignored his work by not acquiring pieces for their collections. They have also skipped the prospect of a large-scale exhibition even though the artist has been going since the 1990s and has a worldwide reputation.

Banksy is a pseudonymous England-based street artist, political activist, and film director whose real name and identity remain unconfirmed and the subject of speculation. His satirical Street Art and subversive epigrams combine dark humour with graffiti executed in a distinctive stencilling technique. His political and social commentary works have appeared on streets, walls, and bridges worldwide. Banksy’s work grew out of the Bristol underground scene, which involved collaborations between artists and musicians. Banksy says that he was inspired by 3D, a graffiti artist and founding member of Massive Attack’s musical group.