A shop by the Street Artist Banksy has appeared overnight at an empty retail premises in Croydon. The installation has been timed to coincide with the ‘big bucks’ international art fair Frieze. Croydon couldn’t be further away from the heavyweight ‘art’ business going on at Frieze and in the west end, but this is far more of a statement than meets the eye. Its timing couldn’t be more to the second.

The south London shop features the stab vest he created for Stormzy’s stint at the Glastonbury Festival. A Tony the Tiger rug and a cradle surrounded by CCTV cameras are also on show as part of the display

The shop located on Church Street in the birthplace of supermodel Kate Moss, a previous subject of the artist. On Instagram he stated; “I’m opening a shop today,” the artist said on Instagram. “Although the doors don’t actually open,” Banksy added he was going to sell products online and people could visit the shop for the next two weeks.

The artist said; he was being “forced” to launch the online shop – called Gross Domestic Product – because a greeting cards company was attempting to legally trade-off of his name.

The artist is being advised that opening a shop that sold his merchandise would help him protect the trademark on his art.

In a statement, Banksy said: “A greetings cards company is contesting the trademark I hold to my art, and attempting to take custody of my name so they can sell their fake Banksy merchandise legally.

“I think they’re banking on the idea I won’t show up in court to defend myself.”

Items for sale include welcome mats made from life vests salvaged from the shores of the Mediterranean, which have been hand-stitched by women in detainment camps in Greece.

There are also disco balls made from police riot helmets and a toddler’s counting toy where children are encouraged to load wooden migrant figures inside a haulage truck.

Banksy said proceeds would go towards buying a new migrant rescue boat to replace one allegedly confiscated by Italian authorities. 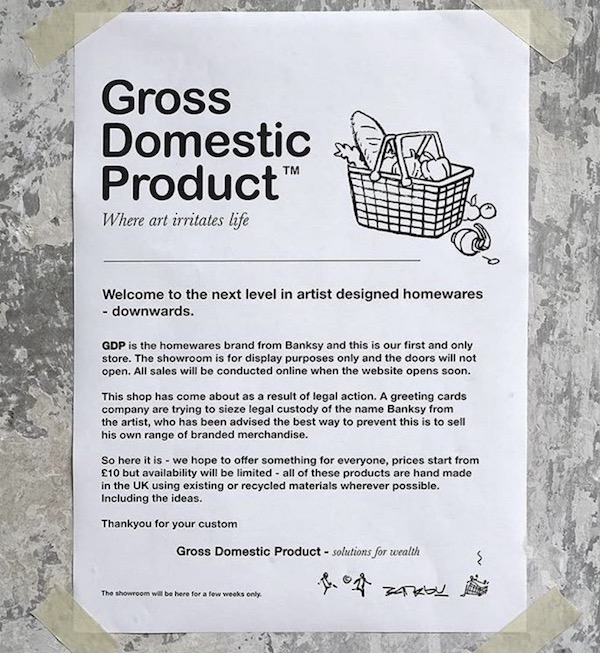 He said despite trying to defend his artistic rights in this particular case, he had not changed his position on copyright.

“I still encourage anyone to copy, borrow, steal and amend my art for amusement, academic research or activism. I just don’t want them to get sole custody of my name.”

Banksy’s paintings which shows the House of Commons seated with chimpanzees is to be auctioned this week at Sotheby’s and is expected to achieve over £1m.

Kevin Zuchowski-Morrison, the owner of street art gallery Rise, said: “It’s incredible that we have this work, very clearly the work of a very famous artist who we all kind of love. It couldn’t be any more authentic.”

All items will go on sale on an online auction platform set up by the artist.