The appearance of a new Banksy graffito in Bristol more or less confirms his position as the genuine top dog in the current British art scene. His only possible rival is Hockney, now living in comfortable exile in France. Bacon and Freud are dead – in any case one of them was as much Irish as he was English and is duly commemorated a reconstruction of his London studio in Dublin, and Freud was a German Jewish immigrant. Damien and Tracey, key figures in the long-ago 1990s, are fading away. Banksy, to all appearances, is solidly British. I say ‘to all appearances’ because we don’t know for sure who he is. The name is a pseudonym. We can’t even be absolutely sure of his gender. We assume he is male, but it remains an assumption, not a provable fact.

Because he works anonymously, and more often than not in the street, Banksy occupies a strange position. Though his work reliably makes very high prices at auction, the portable works that appear in the likes of Sotheby’s and Christie’s are more often than not items offered to raise money for charitable causes. The actual vendors are not; it seems, the artist himself – ownership has been passed on. The street art, on which his reputation is based, usually appears on walls to which he has no right of ownership. 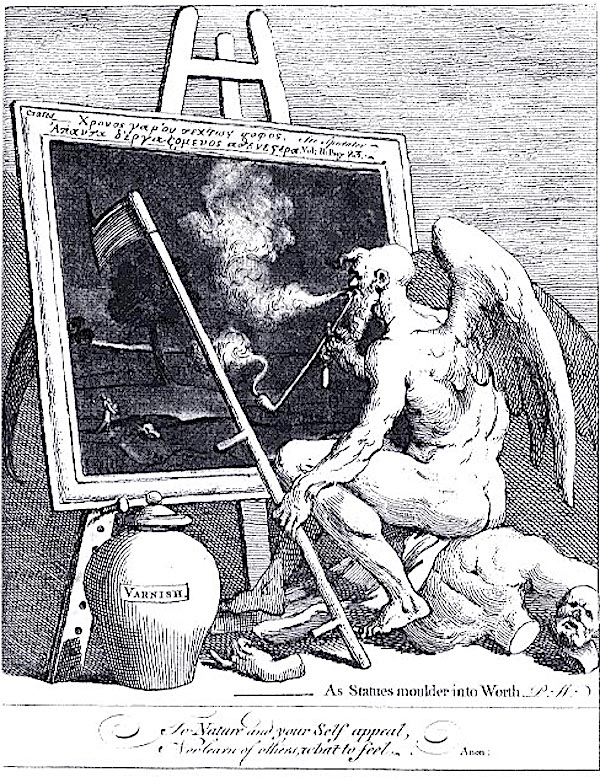 Just because it is out there, in the open, Banksy’s art is, in the most literal sense of the adjective, accessible. You don’t have to have a specific interest in art, nor for that matter money to pay an exhibition entrance fee, in order to encounter it. It perfectly possible for it to catch you unawares, at a moment when contemporary art is the last thing you happen to be thinking about.

The nearest parallels in British art to what Banksy produces are some of the satirical and moralising canvases of Hogarth. And perhaps, even more, the works of certain caricaturists such as Rowlandson and Gillray. However, it differs from these because his images are not only made on a public scale but are also often placed in contexts where the spectator just accidentally comes across them. You might even define what he does as ‘booby trap art’. There’s an element of ‘gotcha’.

At a moment when contemporary art is, so it seems to me, increasingly preoccupied with its own self-righteousness Banksy supplies a dose of common sense. When you look at what he does, he isn’t standing around begging you for applause. You are just there in the street, preoccupied with other stuff, maybe in some danger of getting run over.