Betty Woodman (b. 1930, Norwalk, Connecticut, USA) has died age 87, on 2 January. Woodman was a highly respected Feminist painter and ceramicist. She lived in New York, and Antella, Italy.

Her ceramics, though not explicitly feminist, were a reaction to the male-dominated art world of the 1960s and ’70s

Woodman’s practice related to her ceramics, their decorative design, imagery and unusual use of various media, and can be seen as a way of exploring her painterly sensibility. For many years she focused on the vase, which over time had become her most salient subject. For Woodman, the vase was a vessel, a human body, and animal figure, a metaphor, or an art-historical reference. Painting, particularly in her final years. Her later works were large, colourful drawings and paintings on handmade paper or canvas that combine graphite, ink and lacquer with terra sigillata and wax. Her work alluded to and blended numerous sources, including Minoan and Egyptian art, Greek and Etruscan sculpture, Tang Dynasty works, majolica and Sèvres porcelain, Italian Baroque architecture, and the paintings of Bonnard, Picasso and Matisse. 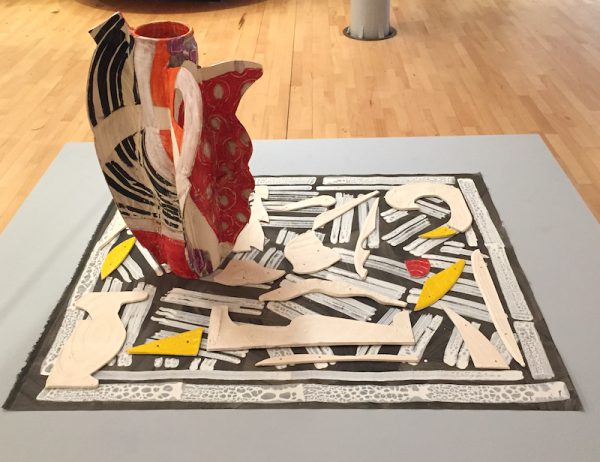 Woodman studied at Alfred University’s School for American Craftsmen. Her first work was utilitarian dinner sets and decorative crockery, but by the 1950s she began to create ceramic sculptures, inspired by Ancient vessels, as well as Mediterranean styles.

Woodman was known for her exuberantly painted Fauvist influenced ceramic vessels, which hover between sculpture and painting. While referencing ceramics from many cultures and historical periods, she was not bound by tradition, but rather used it to explore relationships between structure, surface, and colour. In the later part of her career, Woodman made difficult-to-classify pieces that walk the line between painting, sculpture, and design.

In 2015, she exhibited in the UK at the Institute of Contemporary Arts (ICA) in London. The following year she was commissioned by the Liverpool Biennial to create a permanent work for the city–a 50ft-wide fountain mounted to the base of a Grade II listed art deco ventilation tower.

Woodman’s work is represented in more than 50 public collections and has been the subject of numerous solo exhibitions at museums and galleries internationally.

She was married to the painter George Woodman, in 1953. Their daughter was Francesca Woodman, the feminist photographer killed herself in 1981 at the age of 22. She has become widely represented and will be paired with Egon Schiele in an exhibition LIFE IN MOTION: EGON SCHIELE/ FRANCESCA WOODMAN at Tate Liverpool in May 2018.

Salon 94, which represents Woodman in New York, confirmed the news. “It is with great sadness that we announce the death of artist and friend, Betty Woodman,” Salon 94 said in a statement. “Our heartfelt condolences go out to her son Charles Woodman, her daughter-in-law, Andrea Torrice, her grandson, Alexander Woodman.”