It’s been a week of record-breaking sales for the two leading auction houses Christie’s and Sotheby’s recording billion dollar sales totals and record-breaking prices for artists living and deceased.

Christie’s Fall 20th Century Week at Rockefeller Center realised USD $1.1 billion, achieved across six days of successful Evening, Day and Online-Only auctions. The results were propelled by market-leading prices for masterpieces and major artworks from the most-coveted artists of the 20th and 21st centuries and were underscored by exceptional provenance and quality. This season, Christie’s was the auction house of choice for eight major private and estate collections, which were offered throughout the week and included both individual masterpieces and entire collections decades in the making.

Among the notable achievements of the week, Christie’s twice surpassed the $90 million mark for individual works of art, setting a new auction record for any work by any living artist with David Hockney’s 1972 masterpiece, which sold for $90.3 million (without a reserve), and a new auction record for the category of American art with Edward Hopper’s 1929 masterpiece Chop Suey, which fetched $91.9 million. In total, more than 30 individual auction records were set for artists of the era, introducing new artist names into the ranks of the world’s top prices at auction, and recalibrating the market for artists still underrepresented in the secondary market (see records list below).

Middle-market Day and Online sessions similarly saw remarkable achievements this week, with perfect 100% sold performances for Christie’s dedicated sales of Picasso Ceramics and Giacometti Design, and a combined $95 million total for the Post-War and Contemporary Art Day sale sessions on Friday that closed a triumphant week.

Marc Porter, Chairman of Christie’s Americas, remarked: “It was an honour to have been entrusted this season with so many masterworks representing some of the greatest collections ever assembled in the United States. The strong results achieved over this week were a tribute to the passion of these visionary individuals, and we are proud to have represented them so well and so thoroughly to the global marketplace, from Paris to Hong Kong, London, Los Angeles, and here in New York. This week was a global success for Christie’s, not just for fine art but also for luxury goods, with an additional $126.3 million achieved by our colleagues at Christie’s Geneva, led by the extraordinary Pink Legacy Diamond sold to Harry Winston for $50.3 million.” 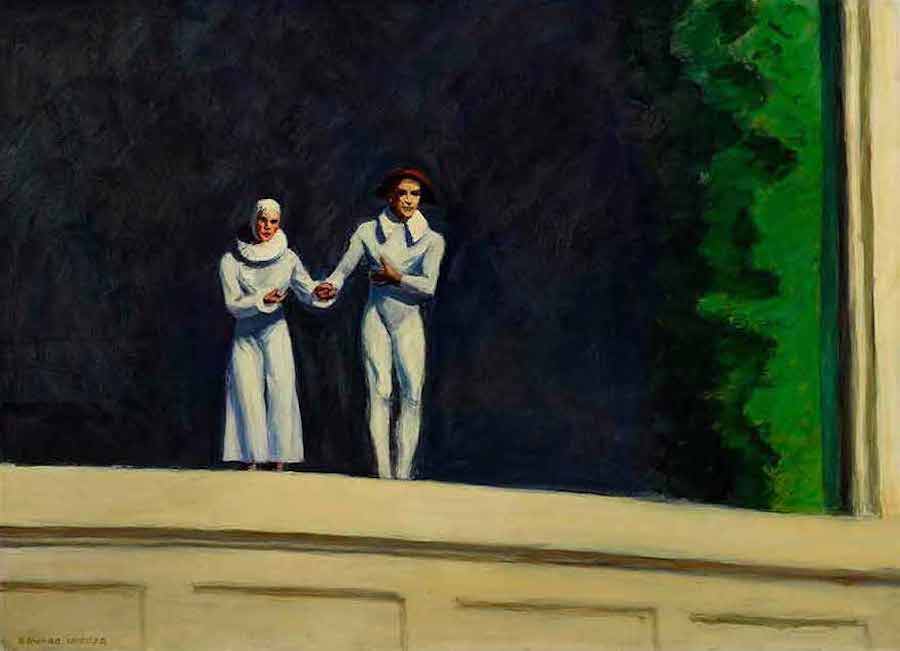 Kayla Carlsen, Head of Sotheby’s American Art Department, New York, commented: “Friday’s results showed continued strength across the full scope of the American Art category, from auction record prices for 19th–century works by Emanuel Gottlieb Leutze and Thomas Moran, to Modern and Contemporary masterworks by Georgia O’Keeffe and Edward Hopper. We were thrilled to see such success among a diverse and wide-ranging group of museum quality works drive one of our highest results in recent seasons.”

The auction was led by Edward Hopper’s autobiographical masterwork Two Comedians, which sold for $12.5 million. Formerly in the collection of Frank and Barbara Sinatra, the 1966 work represents the culmination of Hopper’s career, depicting the artist and his wife on stage taking a final bow before turning to walk into the unknown. Jo holds the artist’s hand, symbolising their close bond and significant role she played in his life and career.

The strong selection of Western art on offer by iconic names including Thomas Moran, William Robinson Leigh and Emanuel Gottlieb Leutze performed well throughout Friday’s sale. The group was topped by Leutze’s impressively-scaled Western Emigrant Train Bound for California Across the Plains, Alarmed by Approach of Hostile Indians, which fetched $4.8 million – well in excess of its $3.5 million high estimates, and more than double the previous world auction record for the artist. The work was sold to benefit the Dover Free Public Library in Dover, New Jersey, where it has resided since it was gifted to the institution in 1943. Though Leutze was born in Germany in 1816 and spent most of his life living and working there, his paintings of the significant figures and historical events of 18th and 19th century America rank as the most celebrated images of his oeuvre – including his iconic image of Washington Crossing the Delaware in the collection of The Metropolitan Museum of Art, New York.

Works by Moran were led by Big Springs in Yellowstone Park, sold above estimate for $1.9 million. Showcasing his mastery of the medium, the watercolour was commissioned as part of the United States Congress’s geological survey of the Yellowstone Territories led by Dr Ferdinand V. Hayden in the 1870s.

Following Wednesday night’s sale of Georgia O’Keeffe’s A Street and Calla Lilies on Red, Friday’s American Art auction featured the artist’s Cottonwood Tree in Spring, which sold for $3.9 million – well above its $2.5 million high estimates. Painted in 1943, the work serves as a testament to the deep inspiration O’Keeffe found in the American Southwest. Each on offer from the Georgia O’Keeffe Museum in Santa Fe, New Mexico and sold to benefit its Acquisitions Fund, the three paintings sold last week by O’Keeffe together achieved $23.3 million.

Horace Pippin’s Holy Mountain, I achieved $3.3 million, more than eight times the artist’s previous auction record of $385,000 which was set by the very same painting in a Sotheby’s New York auction in 1987. Following the artist’s honourable discharge from the United States Army in WWII, the pastoral work presents an autobiographical scene, with a harmonious foreground contrasted by soldiers marching through the ominous forested background. Reflecting on his personal experiences in WWII and the cultural climate of the period, the work is dated to June 6, 1944, corresponding with D-Day, and further reinforcing the ideological dichotomy between war and peace.