Not everything is about Frieze or London this week. Bloomberg New Contemporaries 2017 launches in Gateshead showcasing new and recent fine art graduates, for the first time New Contemporaries launched at BALTIC Centre for Contemporary Art, Gateshead and BALTIC’s project space at BALTIC 39, Newcastle upon Tyne, from 29 September to 26 November 2017. The exhibition will then travel to Block 336, London, from 27 January to 3 March 2018.

Since 1949, New Contemporaries has organised an annual, open submission, touring exhibition for current and recent graduates. This high-profile platform has become nationally and internationally recognised as a barometer of work emerging from UK art schools and has played a significant role in giving a visibility to and thus defining generations of emerging UK-based artists. 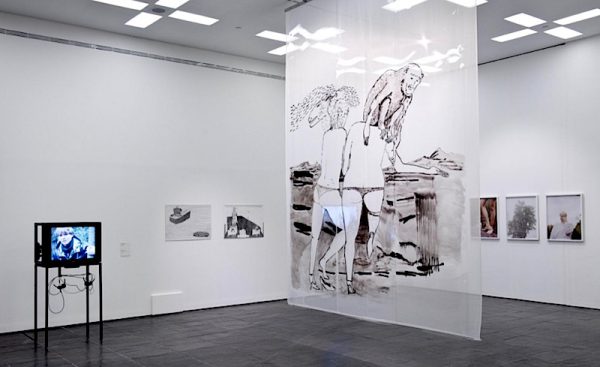 This year’s Bloomberg New Contemporaries brings together traditional techniques and materials alongside film and video. Themes include narratives exploring identity, as individuals and as communities; as well as truth, fiction, and the unreliability of memory with the resulting exhibition offering a unique nationwide insight into UK art schools today.

By re-imagining memories and old photographs from family life, Eleanor Breeze creates paintings which depict scenes that may or may not have occurred in the past. In Melissa Magnuson’s work, fragments of stories, memories, facts, fiction, half-truths and current events are interwoven constructing an alternate version of events that are familiar yet unsettling. Global issues of landscape, power and identity reoccur with the artist’s open dialogue and engagement with the communities she photographs at the core of her work.

Exploration of identity, as individuals and as communities, form Tereza Červeňová’s work with themes of belonging and ‘a sense of home’ recurring in her photography while Michaela Yearwood-Dan explores what it is to be a young second generation Black British woman. Yearwood-Dan’s practice narrates the juxtaposition between the ‘exotic’ fabrication projected upon the artist and the heavily stigmatized realities of her life. Providing an opportunity to view two worlds – the ‘tropical’ West Indies and ‘urban’ London – the artist is transported between these two positions.

In her work, Devlin Shea depicts moments of palpable, yet barely visible tensions, hinting at the internal emotional state of her figures. Her work depicts intimate moments in time or quick gestures that are more cathartic than visually telling, reflecting Shea’s fascination in the way sub-conscious gestures manifest as physical communication. Meanwhile, James Laycock’s films draw on the conventions of post-war theatre, ‘kitchen sink’ dramas and TV sit-coms. Ideas of class distinction, nationalism and religion each reoccur with the fabricated set and props becoming metaphors for the characters’ conditions.

Meanwhile Adam Castle & Ed Twaddle’s film To Me You Mean The Most sits somewhere between a rehearsal, a theatrical performance and a TV sitcom. Filmed in a community hall, the work examines the way in which we absorb the popular culture and re-perform it in our daily interactions with each other. Repeating lines that we’ve heard a million times before, the words of the two characters are thick with commercial gloss yet amongst the clichés there may be some truth in what they say.

Of this year’s Bloomberg New Contemporaries, Kirsty Ogg, Director, said “For over nearly seven decades, we have played a significant role in giving a visibility to generations of emerging UK-based artists. Offering a unique nationwide insight into UK art schools today, we are delighted to launch this year’s national touring exhibition in Gateshead and Newcastle upon Tyne for the first time. Each year, the selected works explore different themes of inquiry into key contemporary issues such as identity, materiality and technology.”

Sarah Munro, Director, BALTIC Centre for Contemporary Art, said “Profiling and supporting emerging artists is fundamental to BALTIC, and therefore it is wonderful we can present the renowned New Contemporaries exhibition in our galleries this year. This longstanding and vital platform gives visibility and recognition to an incredible breadth and depth of emerging talent from graduating artists from across the UK.
It will be exhilarating for our visitors to see such a valuable and extensive survey of this scale and nature. Furthermore, it is an honour for BALTIC to partner with New Contemporaries and plays a critical role in encouraging talent development of artists, including the 47 in this exhibition. It is especially fitting that all three of this year’s selectors – Caroline Achaintre, Elizabeth Price and George Shaw – have all previously been the focus of solo exhibitions at BALTIC in Gateshead”.